After my Final Chapter article in July 2019, I had an astonishing amount of optimism and motivation to build the fastest S2000 in the country. Back when things outside of racing were normal. Covid 19 sucks, it’s as simple as that. This pandemic has affected my program in numerous ways. For one, I let you, the reader, down. It’s been too long since my last on track article. It wasn’t all bad though, electing not to do any track related activities has kept that motivation from last July as high as the tension between Democrats and Republicans in the United States. With that being said, present-day Sheri is under the knife this off-season. 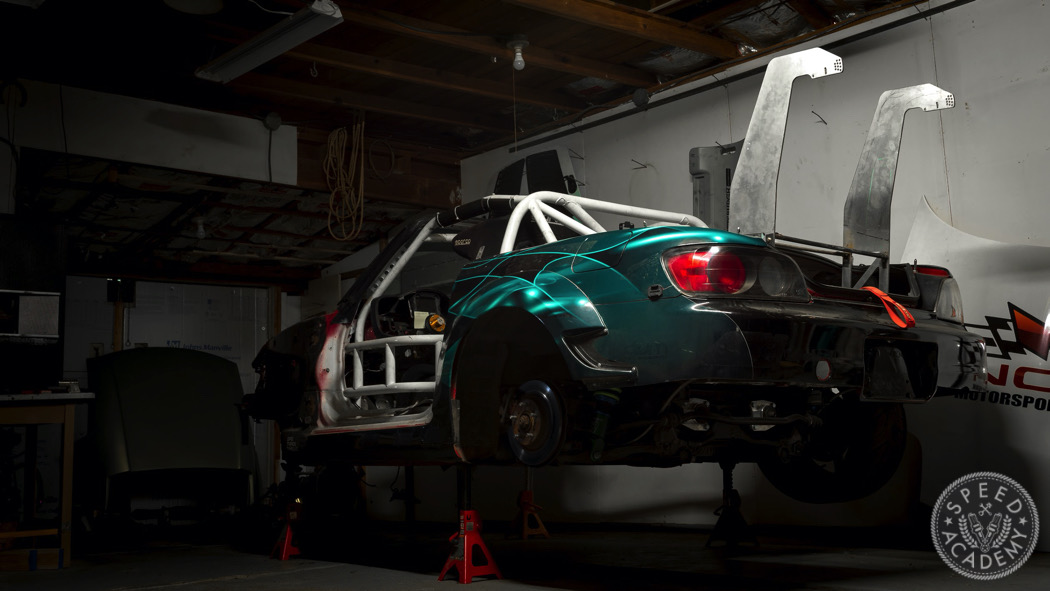 The S2000 has had some transmission alignment issues for a while now. What would happen is the pressure plate would not disengage. I’ve taken the trans out several times and I’ve inspected and changed everything you have in your mind that it could be. I decided to take the front subframe out and check for bends or the holes going into the frame being out of whack. I was thinking that a bent subframe could be angling the transmission in a way that is causing it to separate from the adapter plate under load. Then I muttered the famous words of every garage ornament owner: “Well, while I’m at it, I might as well…….”

That was preceded by me removing everything; engine, front subframe, exterior pieces, wing, hardtop, fuel system, interior, everything you can think of is off at the time of writing this. I know what you are thinking, “Why does Devin do this to himself?” The simple answer is I want to hold myself to higher standards. In the past 9 years of ownership, there have been some repairs that were “temporary,” that became permanent. There are also a few things that I’ve always wanted to do in my quest for the title of fastest S2000 in the country. 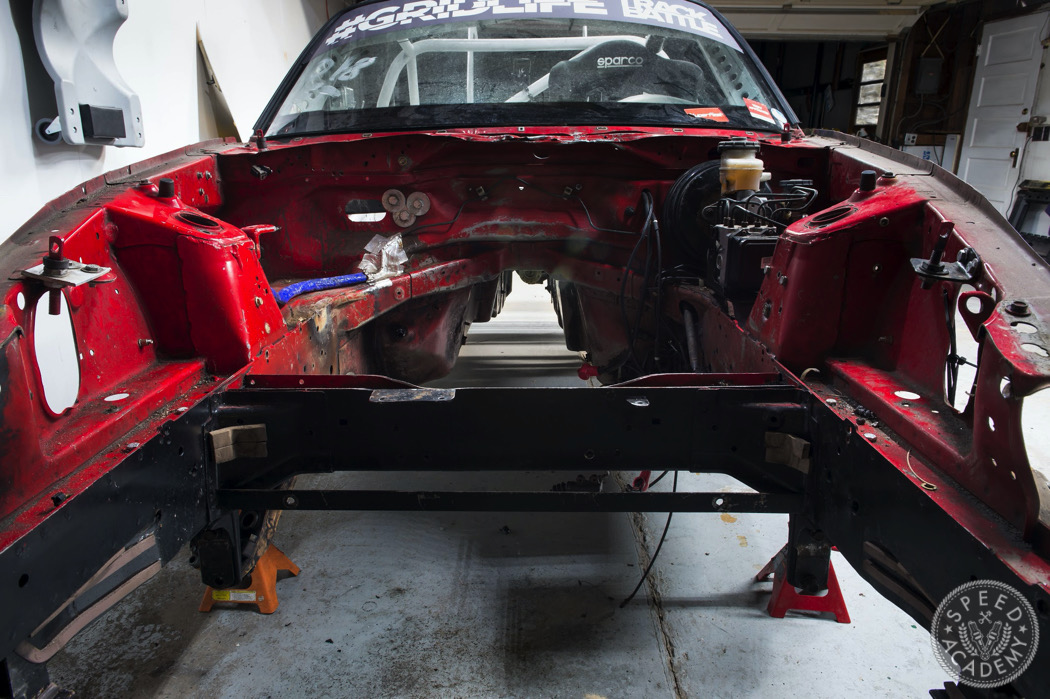 One thing that you can see right away is the firewall and front brace. They both were bashed in with a rather large hammer to be able to get engines in and out without destroying camshaft sensors or dropping the subframe. You can also spot one of those temporary mods on the firewall. There are three bolts and washers on the firewall to seal the engine bay from the driver’s compartment. After my fire in 2017, I made sure I was completely isolated from the engine compartment. 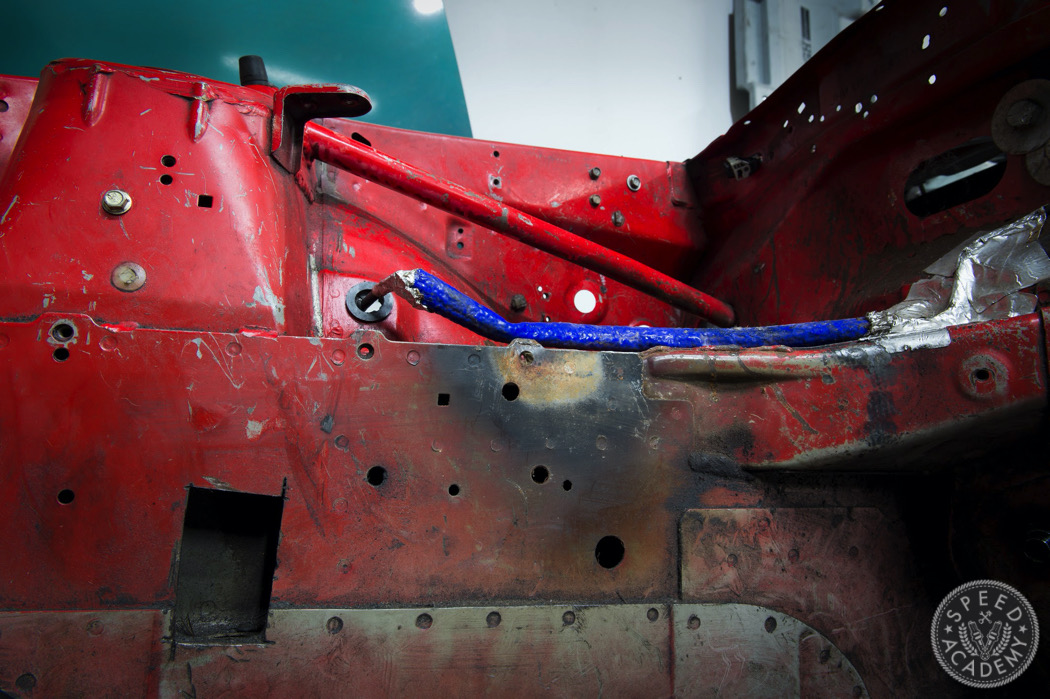 With everything out of the way, now is the time to properly fix the fire damage from 2017. As you can see, this section has been hot! What you can also see is an access hole from back in 2015. There was a seized subframe bolt and the only way to get it out was, well, zzzz zzzz. For the smart people that don’t work on their own cars, that’s the sound of a cutting wheel about to make some sparkie sparks. There are also a thousand holes for miscellaneous things over the seasons. From boost controllers to catch cans, every hole tells an interesting story. While I’m at it, I might as well properly protect that passenger side brake line. This form of heat management did well with the reflective heat tape and heat sleeve, but it wasn’t very attractive to look at. 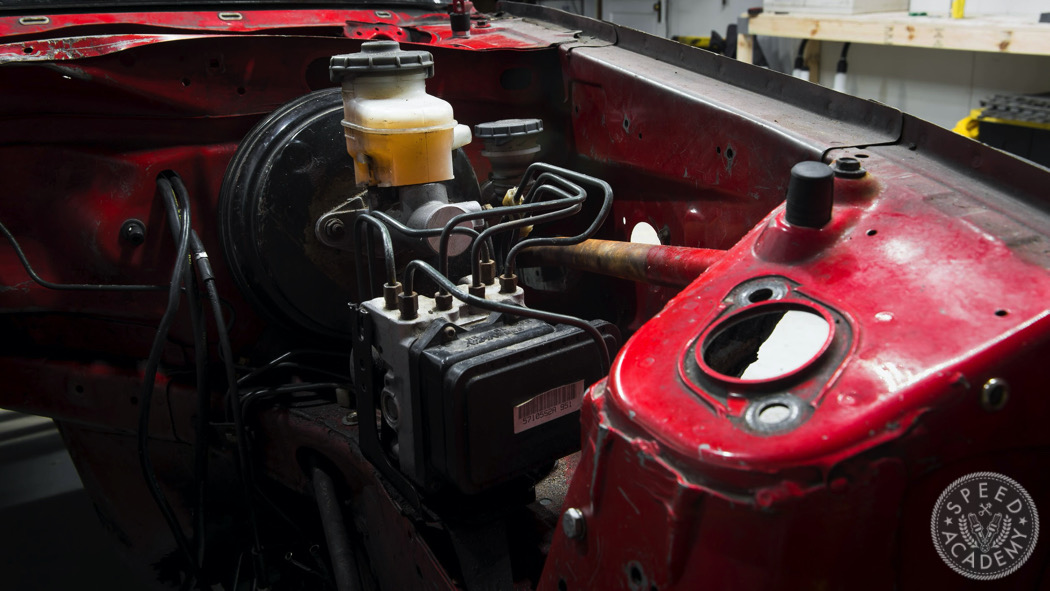 The driver side gets slightly better. It’s been more or less kept in OEM condition, minus the bar connecting the roll cage to the shock tower. I was always afraid to remove the ABS module in fear of not being able to bleed it properly after reinstalling it. I also feel the same way about the clutch hydraulic system. Well not anymore god damnit, I’m an adult I can do this. I need to replace the master cylinder for the clutch since the fluid is showing that there is some contamination. It’s also time to get back there and paint that brake booster and roll cage bar. And while I’m at it, I might as well paint the entire engine bay. 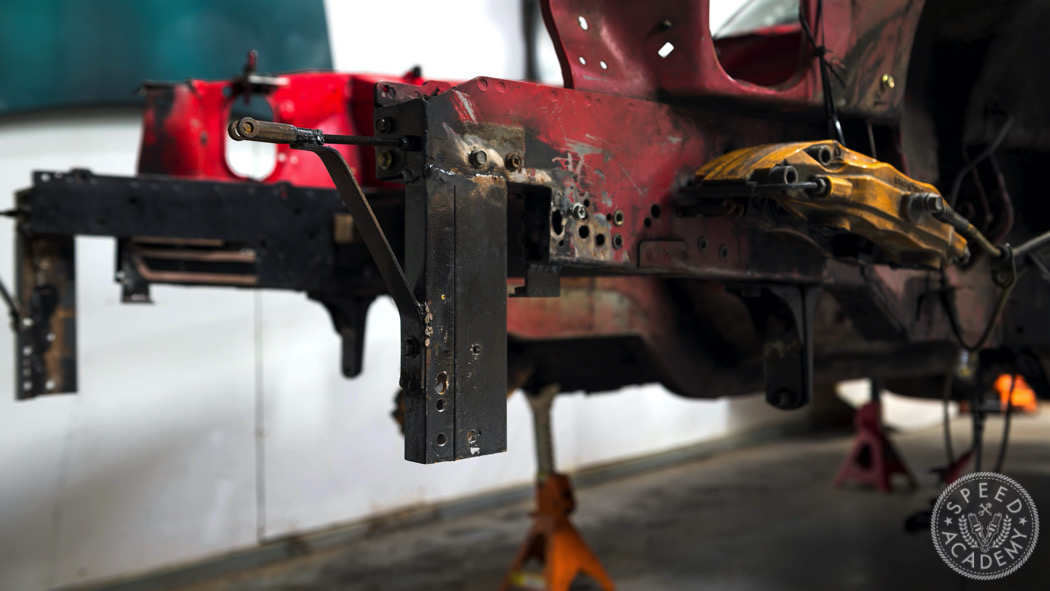 Sheri has seen a ton of different splitters over the years. Offering her up as an R&D vehicle for companies has taken its toll on those frame rails. The Professional Awesome splitter quick release system is the last splitter mounting solution I’ll ever need, it’s that damn good. With that knowledge, I might as well cut the frame rails. “I might as well” is a dangerous start to a sentence. I have a CSF R1 race radiator that I’ve been dying to use. It’s a motorsports grade radiator that I need at this point. Did you know a four cylinder turbocharged engine making around 600-whp on a road course needs a worthy cooling system? Yeah me neither, who would have thunk it. The reason I have to cut the frame is that this radiator is four inches wider than the inner frame rails. 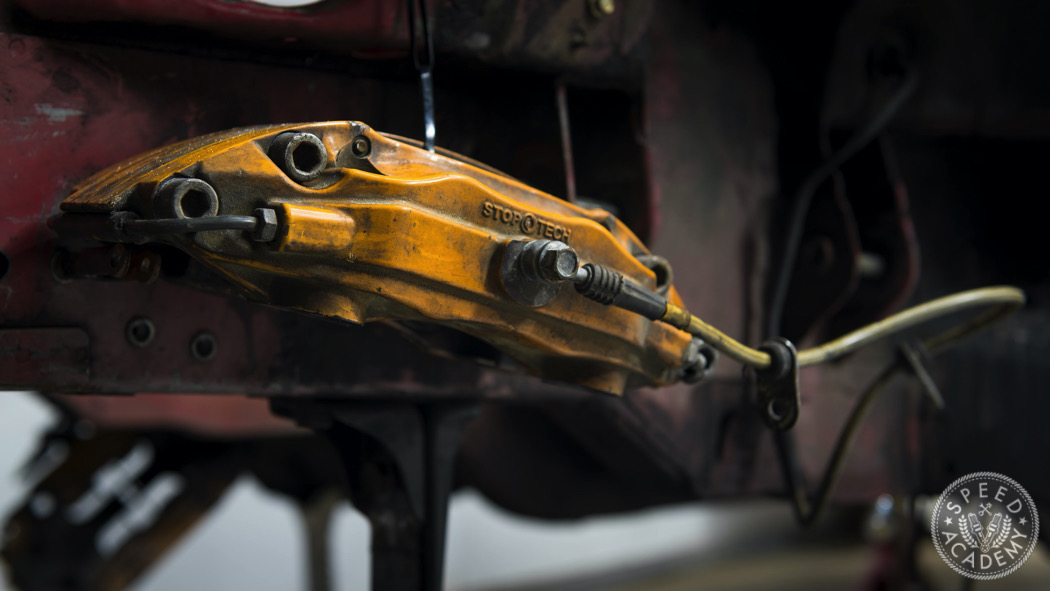 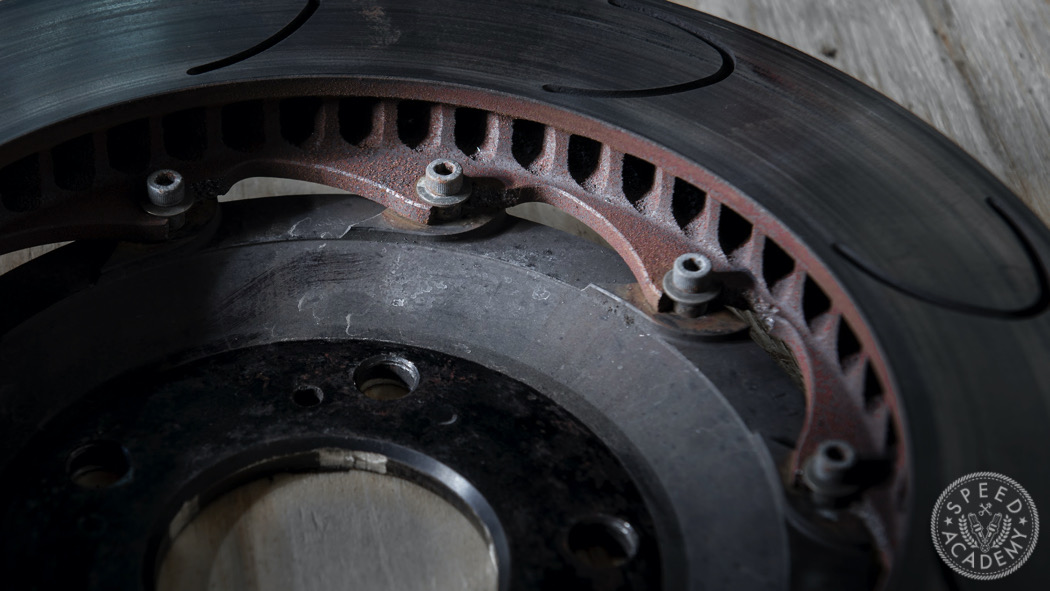 These Stoptech ST40 calipers have been fantastic! They are one of my best purchases of all-time. In fact, in five years they still don’t need to be rebuilt. They have a lot of rubber marks on them from sitting so close to the barrel when I had 17×10 RPF1s. I think these deserve a deep cleaning for being so reliable. Side note: the ST40s are used in REAR of the C5’s in Stoptechs big brake kits. Good news comes with bad unfortunately. The mounting tabs have broken off on these third-party rotors. This could have ended poorly if they completely separated on track. Imagine going 130 miles per hour and not being able to stop at all. Not a spongy pedal like brake fade, not even a pedal that’s being pushed down with some resistance like a brake leak. It would be a hard pedal where the car isn’t stopping at all. Terrifying to say the least. While I’m at it…..I’m just kidding this time. 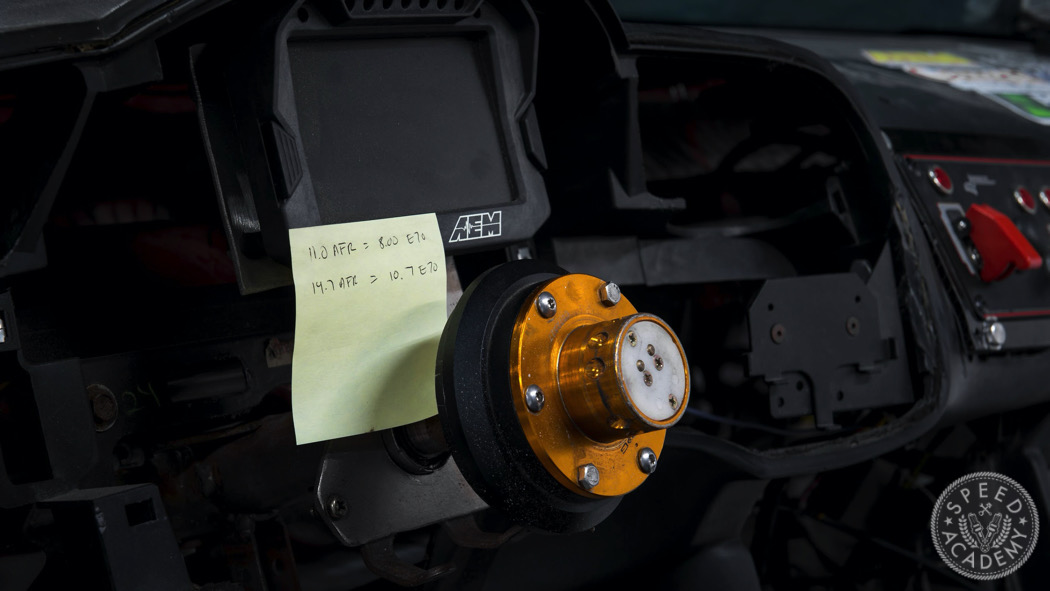 If you haven’t heard me on the Professional Awesome podcast Hyper Critical, I’ll let you in on a secret. I need a power distribution module (PDM) in my life. I have a bunch of wires leading to a fuse box that aren’t labelled with fuses that I have no idea what they go to. It’s time to simplify my wiring and make things easier to troubleshoot. Not to mention it looks pretty cool when it’s just a PDM and an ECU on a panel. Something about that screams race car. 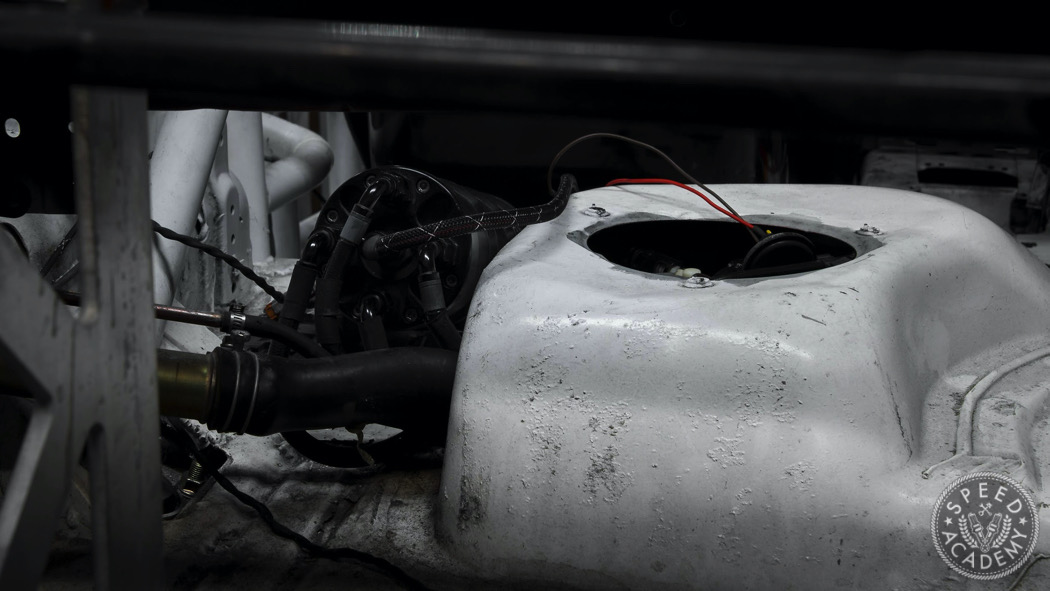 I want to get my Radium fuel surge tank out of the interior. I already have an ideal location to relocate it. Since this car has been a race car for some time now, I removed the EVAP system a few years ago. The charcoal canister for that mounts underneath the car, right before the fuel tank. Luckily for me, the canister was roughly the size of the surge tank, so it’s an ideal location. This being right behind the driver was another one of those things that was supposed to be temporary but ended up being there longer than it should have. This is a safety concern and I’m actually pretty ashamed of myself for this one. Don’t be like me on this one. Address any and all safety concerns right away, it’s literally a life or death scenario.  Put a bulkhead between yourself and anything fuel related! Okay, I’ll put my safety pamphlet down and stop preaching to you for the moment. 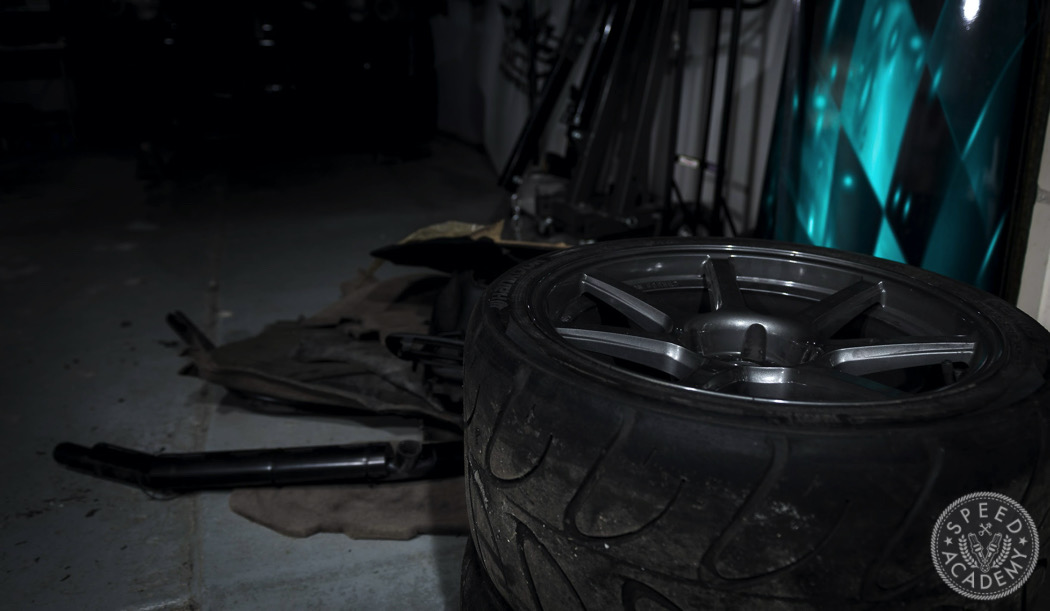 Konig Ultraforms are staying with the car but instead it may be time to upgrade what wraps around them. Maybe some 315s, who knows. I need to make a phone call to the purple crack sellers known on the streets as Hoosiers. 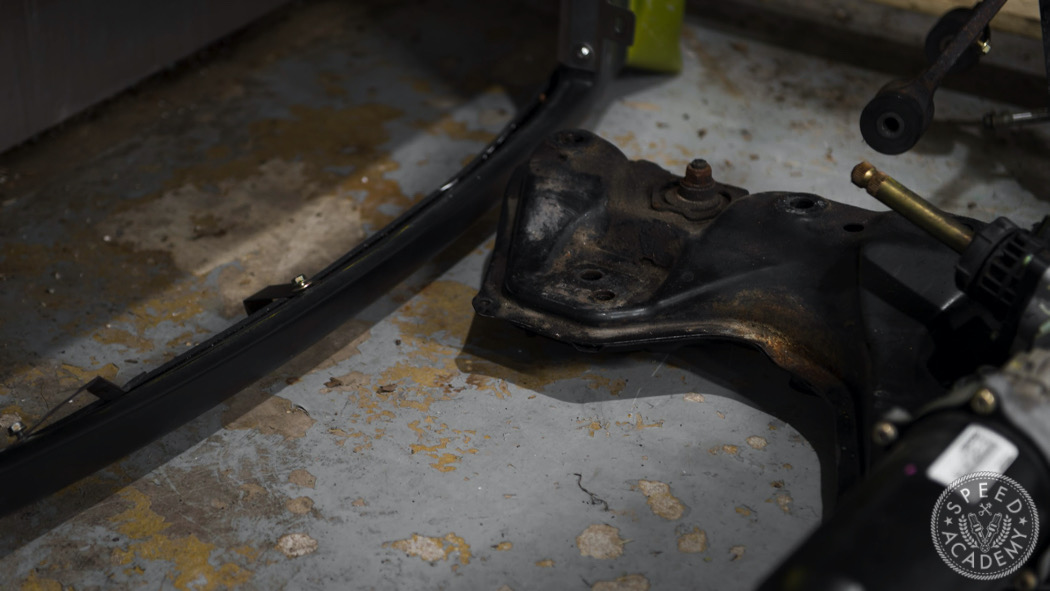 I’m also finding out that things were on fire that I didn’t know were on fire. In the photo above, it seems like the driver side subframe has seen some heat. The only thing that was remotely close to that was a wastegate dump back in 2017. I’m going through this thing with a fine-tooth comb. I’d also like to personally thank you, the reader. I love your comments on social media and I truly enjoy when people message me saying they read my stuff. It makes doing all of this worth it, whether it’s me helping you make a decision or you’re just hiding in the bathroom on a poop break looking for some entertainment, it means a lot to me. I really appreciate all of you, in fact, find me on Instagram, I need your help picking a color for the engine bay and interior.