The first angle in a high performance valve job is the throat cut, as seen in the video above, and is typically around 60 to 70 degrees. This helps ease the air’s transition to the seat cut. The second cut is the seat cut, which is generally done at 45 degrees and is the surface that the valve actually seals against. The third and final cut is called the top cut, which is normally in the 20 to 30 degree range and is made immediately after the seat. This cut helps reduce valve shrouding of the airflow past the valve (or before the valve on the exhaust side) as the valve starts to lift off of the seat.

The bowl area, and especially the short turn radius on the port floor, are also critical to airflow in most cylinder heads. In fact, on the Honda D-series, B-series and K-series cylinder heads I have had ported and flowbench tested, as much as 30-40% of the improvement to airflow has come from work done in the bowl area. This is also the area of the head where porting experience comes into play, since changing the radius of the short turn and the overall shapes within the bowl area can have a big impact on the angle the airflow enters the combustion chamber at, which can in turn have a big impact on the combustion event itself.

When chasing that last 10-20%, factors including the shape, cross section, surface finish and overall volume of the ports come into play. Larger volume ports may seem like a good idea, but more volume can often mean losing torque due to lower air/fuel velocity, especially at lower engine speeds. If taken too far, volume increases can even lead to airflow reversion or backup, where air literally backs out of the combustion chamber towards the intake manifold. Straightening the ports while increasing volume as little as possible is therefore the most common approach in this area. Combine that with a textured surface (a fairly extreme example pictured above) on the intake side to encourage fuel atomization and boundary layer activation and you should find most of the remaining airflow gains.

There’s no question cylinder head porting can be a very effective way to improve the volumetric efficiency and overall airflow capabilities of any cylinder head. But when’s the right time to spend the $1000+ it takes to hire a reputable head work specialist? That depends on what you’re trying to achieve with your engine build, but in general the time is right when you upgrade to a bigger turbo or higher lift/duration camshafts and the airflow capabilities of your intake and exhaust side bolt-ons exceed that of the head itself. In other words, if your cylinder head starts to become a bottleneck in the system, it’s time for some head work. 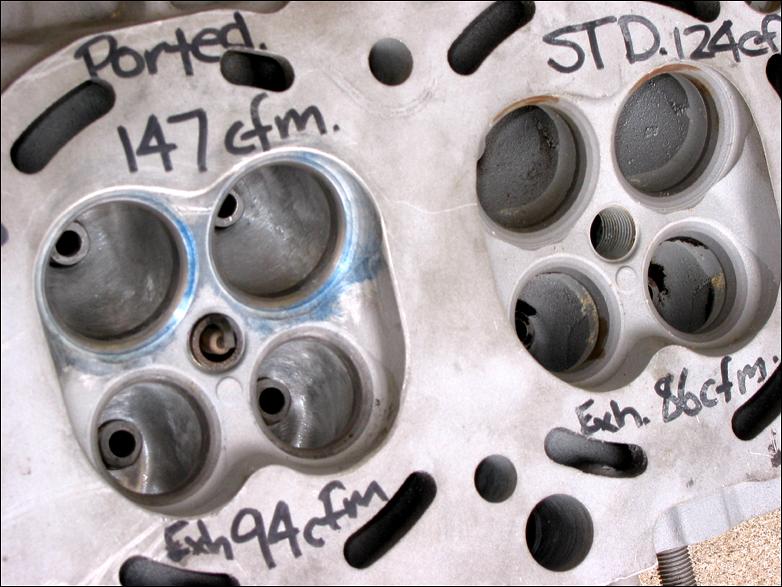 I’ve even ported my own Honda D16Y8 cylinder head and had it flowbench tested by Graeme at Canadian Cylinder Head Technologies when I decided I wanted to see how much all-motor power could be squeezed out of one of these stout little SOHC mills on a shoestring budget. It was a lot of fun and a lot of work (probably spend 10 to 12 hours with the die grinder) and the test results were solid, with about a 20% improvement in flow over a stock Y8 head, but a pro could have done a much better job. But hey, I was on a budget and it was a great learning experience, so if you’re the hands on type there’s no reason not to do some porting yourself. Just be conservative with the amount of material you remove, because the last thing you want to do is blast through into a water passage and have to get the head repaired or toss it in the garbage.

Project ASS2000
Gets Its First Round of Upgrades

Finally! Our long-neglected AP1 S2000, presented by Turn14 Distribution,  has been treated to some desperately needed upgrades, starting with the mods that tend to make the biggest impact on looks and…