Dry sump oil systems are one of the less commonly understood and, in turn, appreciated subjects in the high-performance car world. Many enthusiasts don’t even know about it and those that do simply know it as the thing you need to have if you’re serious about racing but it’s not necessary for “the rest of us”.

Before I can discuss the latter, I need to address the former. What is dry sump oiling? No, it’s not a bottle of goo from As Seen On TV that allows you to drain your engine dry and have it work better than before. The concept of a dry sump oil system encompasses several things, but at the core of it, as the name suggests, is the role that the oil sump plays. 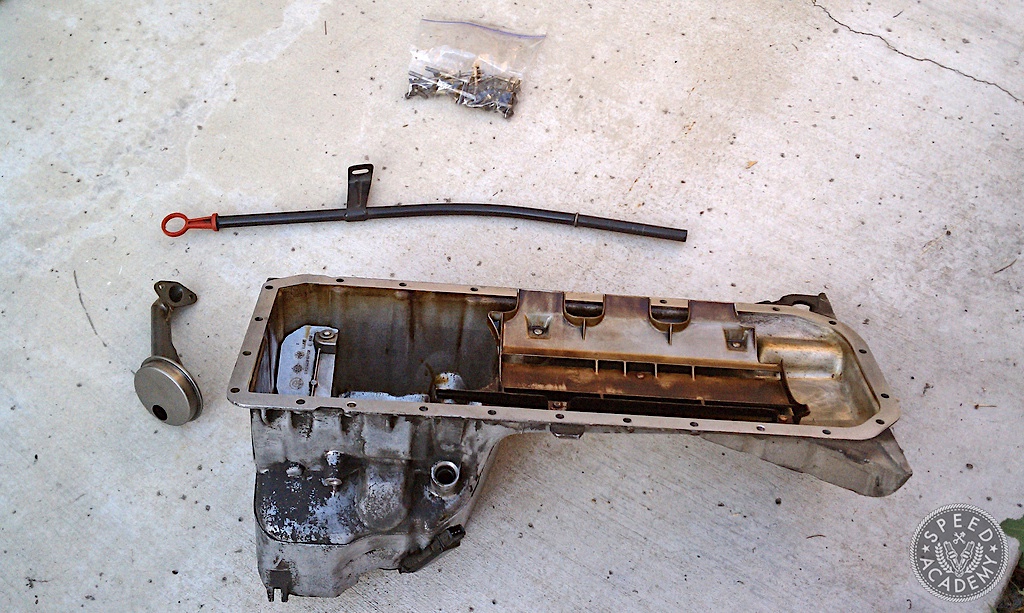 Normally the oiling system is seen as a closed circuit contained within the engine, save perhaps for a trip to an oil cooler. The oil pan is just a bucket where the oil sits when not used. Then when the engine spins, a pump driven off the crankshaft sucks the oil up from this bucket, circulates it through the engine, usually first through the crankshaft on its way to the crank bearings, then up to the piston rings and cylinder head(s) and from there it falls back down into the pan. Due to this role, the sump or oil pan is referred to as wet, hence the term wet sump.

On the other hand, at the core of a dry sump setup is the idea that the oil doesn’t have to sit in the engine’s oil pan. We can put it wherever we want and then transport it back and forth from this external reservoir as needed. Between entering the circulatory system of the engine and draining back down, everything else remains the same. 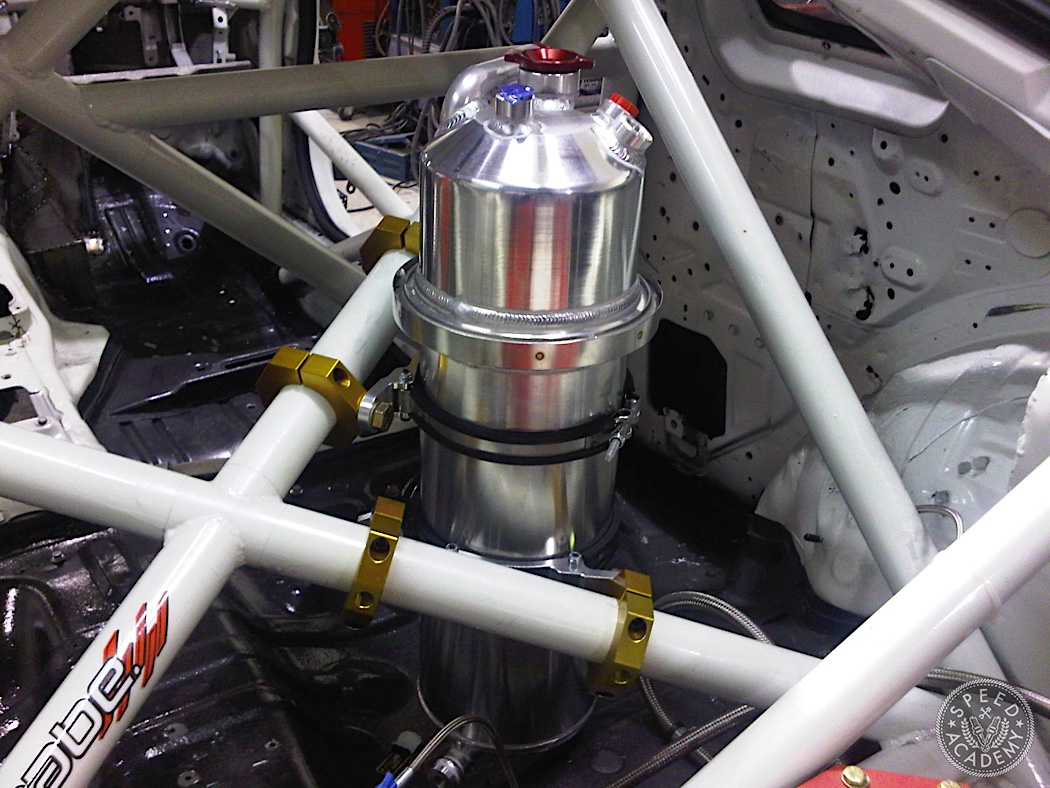 Sounds simple enough, now why would this be of any benefit? There are a bunch of reasons and many of them aren’t intuitive.

The first is easy and is the most commonly known – preventing oil starvation. Recall the last time you were trying to finish off a drink with a straw. You’re sucking a lot of air aren’t you? 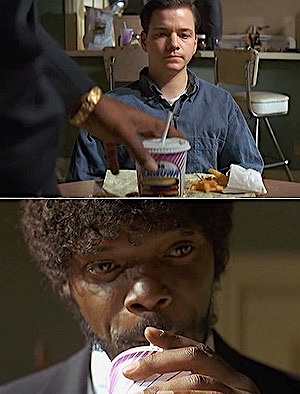 This is what’s happening inside your wet sump oil pan. Except the engine doesn’t have the ability to chase the fluid with the pickup as it moves around. So when you expose the car to forces in the horizontal plane – such as lateral from cornering, or longitudinal from braking or accelerating – you are sloshing the oil away from the pickup. In the best case, you are aerating the oil going into your engine and air isn’t a good lubricant. Worst case, you are temporarily terminating the oil supply to the engine. Many of you know what happens next (sadly, from first-hand experience). Engine bearings “float” the crankshaft in a thin film of oil and if this is removed, catastrophic damage can occur very quickly. If you’re lucky, it means a rudimentary engine rebuild. If you’re not, the heat of the spun bearing can weld the rod to the crankshaft, breaking it as it tries to rotate and then the nub ventilates your block. Timing chain tensioners are also usually at least partially hydraulic so the chain can skip, marrying your valves to your pistons. 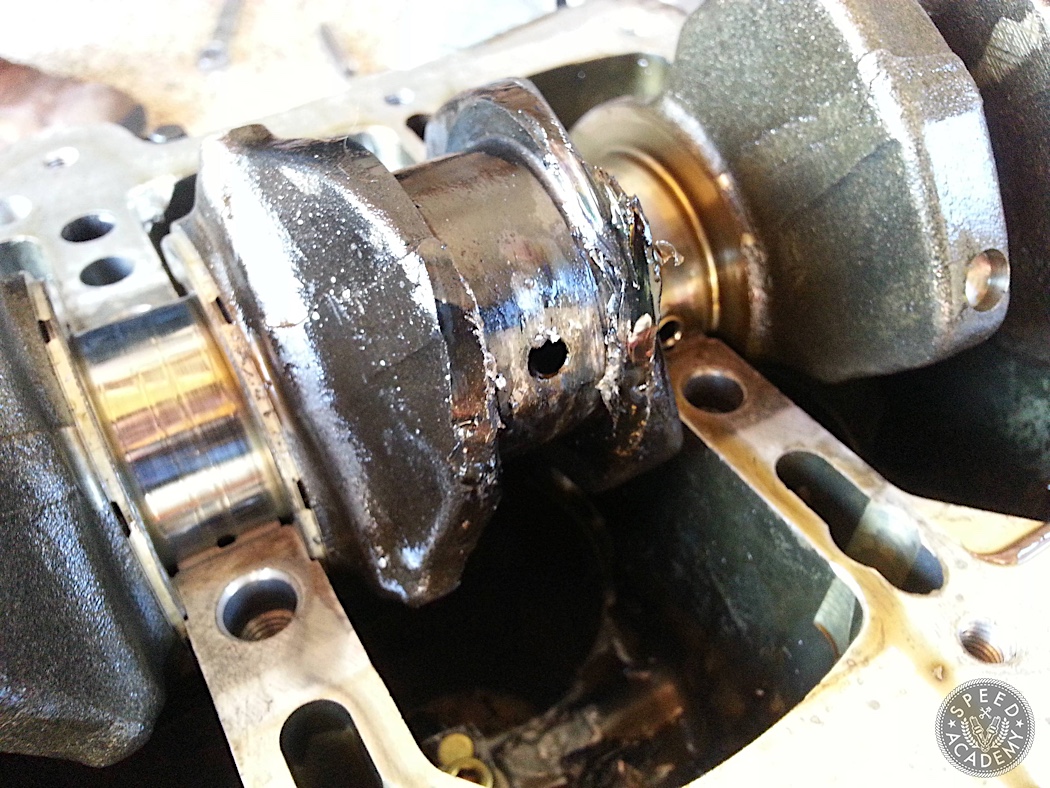 The oil tank of a dry sump system acts very much like a surge tank in racing fuel systems. The idea is to have a container that is taller than it is wide, that way even if the oil somehow sloshes all the way to the side with your epic levels of grip, the pickup at the bottom will still be fed. Also since the tank dimensions are now arbitrary within reason, you can put a LOT more oil into your system than you could with a wet sump – 2-3 gallons of tank volume alone being common. The tanks can have internal heaters (see below) so you can have hot oil before the engine ever moves. 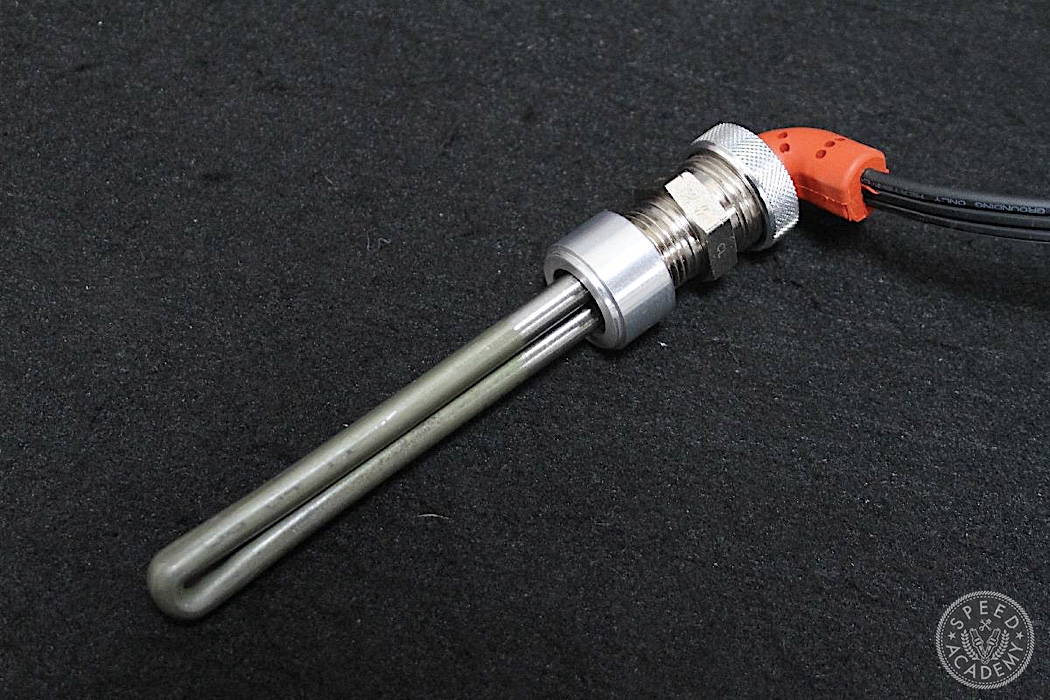 A benefit that many people are aware of is that because the engine loses the big bucket underneath, it can often be lowered quite drastically without worrying about smoking the oil pan on a curb, and lowering the center of gravity on the engine end of the car.

Another benefit relates to the bit earlier about air not being a good lubricant. Even if your pickup is in the oil, the oil is often like a bottle of soda that was just opened. The oil splashes around, gets churned by the crankshaft and even with windage trays etc, it will aerate (read: foam). With a dry sump system, the oil is returned to the tank where it has a chance to deaerate and get picked up from the bottom. You also have the opportunity to help it do that with inline devices. The best one of these is the Spintric from ARE, which is like a centrifuge for the oil. As the oil passes through, the momentum of it going around in a spiral squeezes the fluid to the outside while the gas escapes from the middle. The difference is easily visible, with the oil entering the Spintric looking like coffee with too much cream, and exits looking more like what you’d get out of a new jug of oil.

This is especially important on a dry sump system because it evacuates a lot more than just the oil. And that leads me to another benefit which is most poorly understood. A wet sump depends on gravity to return the oil back into the container. A dry sump system needs a way to transport the oil from the engine to the tank and back. Enter the dry sump oil pump. It sucks oil from the tank (ideally not doing a lot of work to do this, more on that in the details of my install) and jams it into the motor under pressure. Here we find another benefit of dry sump where you can adjust this external oil pump to set the pressure to whatever you desire without taking anything apart. But the same pump also sucks the oil out of the engine to deliver it back to the tank.

The dry sump oil pan seems like it is a non-factor – just a plate of aluminum you need to bolt up to cover up the crankcase. It is actually a critical design feature in the success of a dry sump system because it needs to collect the oil to be sucked up by the dry sump pump and if it’s not well designed to supply and baffle the suction stages – called scavenging – you will run into problems. ARE makes pans based on 40 years of experience, which optimize the oil return via mini-sumps with baffles and screened pickups. 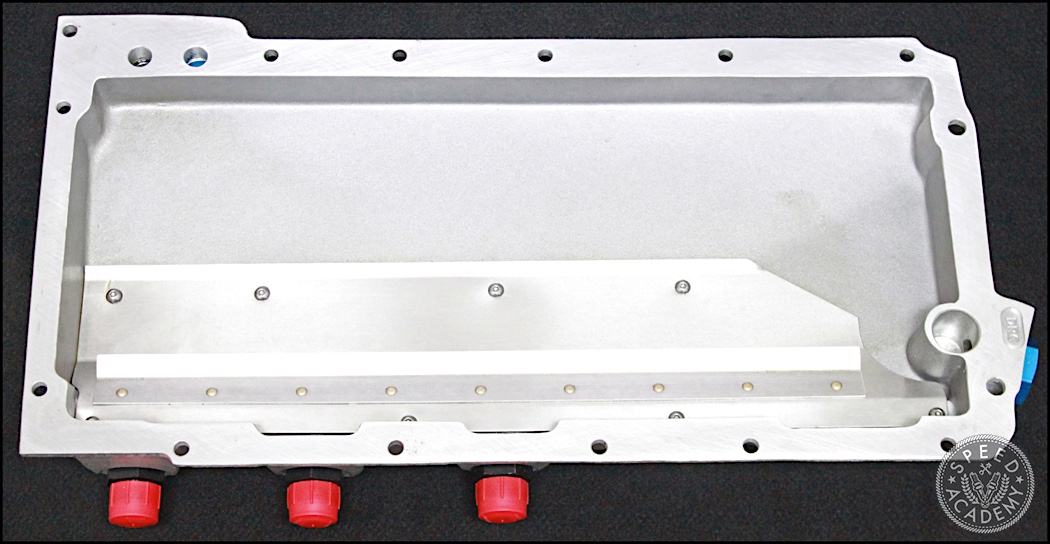 So now that you have the pump sucking the oil out, what else good does this do? Well, why do we need crankcase ventilation? Because combustion gases will invariably find their way past the pistons, and the higher performing the engine, especially with forced induction, the more blow-by there will be. The blow-by will mix with oil vapour and need to be evacuated. Modern emissions systems will pump it back into the intake to be combusted (or in modern Direct Injection engines, cake onto the intake valves, thanks a lot…) and many high performance projects will instead redirect this mixture into a catch can (or dump it out of a hose onto the ground… tsk tsk), where they will periodically need to drain the accumulated condensed oil and water.

But imagine if instead of the crankcase being pressurized, it was under vacuum. That piston coming down during a combustion or intake stroke doesn’t have the same dense pillow of air to slow it down anymore, does it? That, combined with the crankshaft never having to churn wet sump oil results in one of the unappreciated benefits of dry sump: it frees up horsepower! How much depends on the individual setup but 30hp is typical and there are examples of 70+.

Dry sump systems have “stages”. There is at least one scavenge stage, and sometimes this is all the user wants. The stock oil pump is retained and is fed by the dry sump tank. Otherwise, a pressure stage is added. So a 4 stage pump that is used to both pressurize and scavenge has 1 pressure stage and 3 scavenge, like this ARE pump for example. 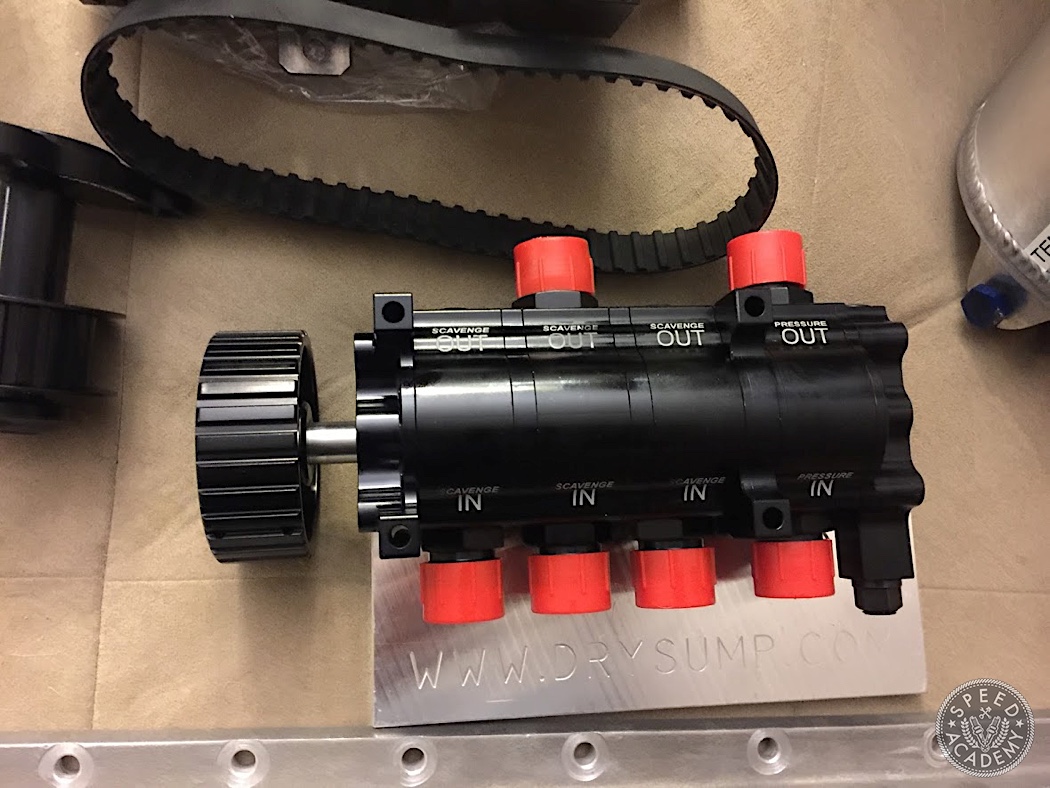 Now that we know why any of this is even a good idea, let’s quickly look at what goes into a typical setup.

The pump is at the heart of the system. It mounts somewhere on the side of the block, often replacing something silly like an A/C compressor. The pump is driven by a belt off the crankshaft or driven internally like on OEM dry sumps like Porsche, AMG and Corvette. 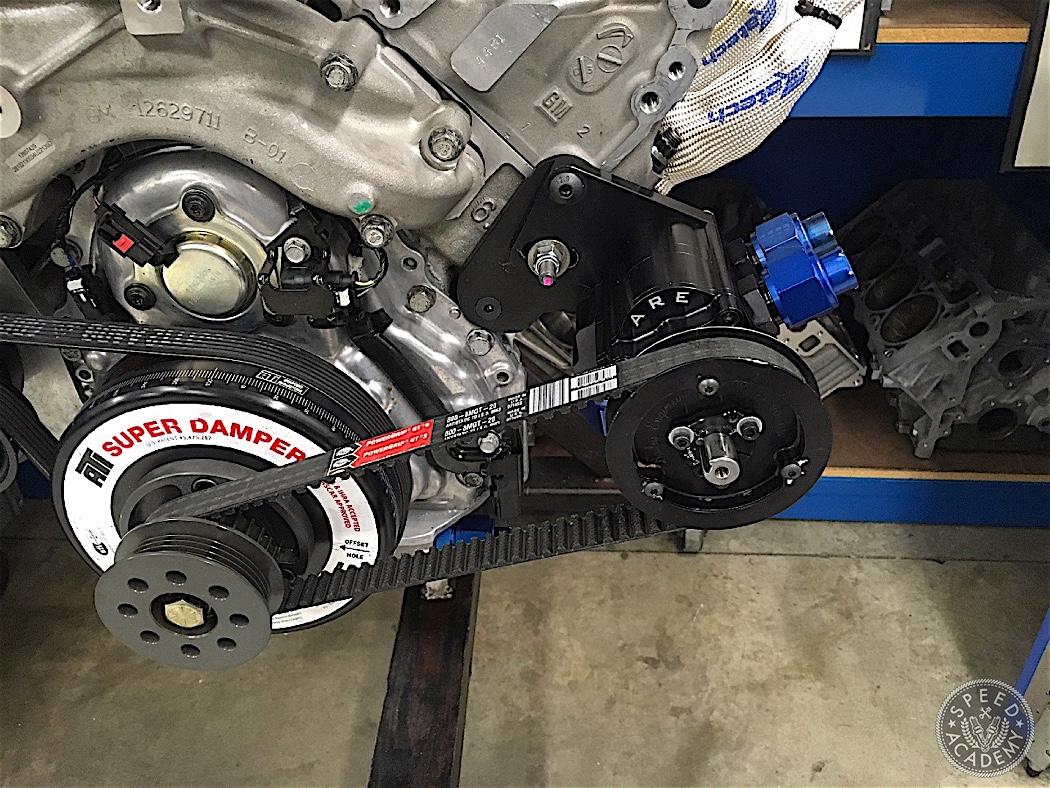 The minimal system only utilizes scavenge stages and reuses the stock pump for pressure. The added pump sucks the oil out of the pan and returns it to the tank (preferably through a de-aerator like the Spintric). The tank itself will have internal baffling to reduce sloshing and aeration, and a drain as low as possible, feeding back into the engine’s OE filter/pump to supply it with a reliable source of oil. 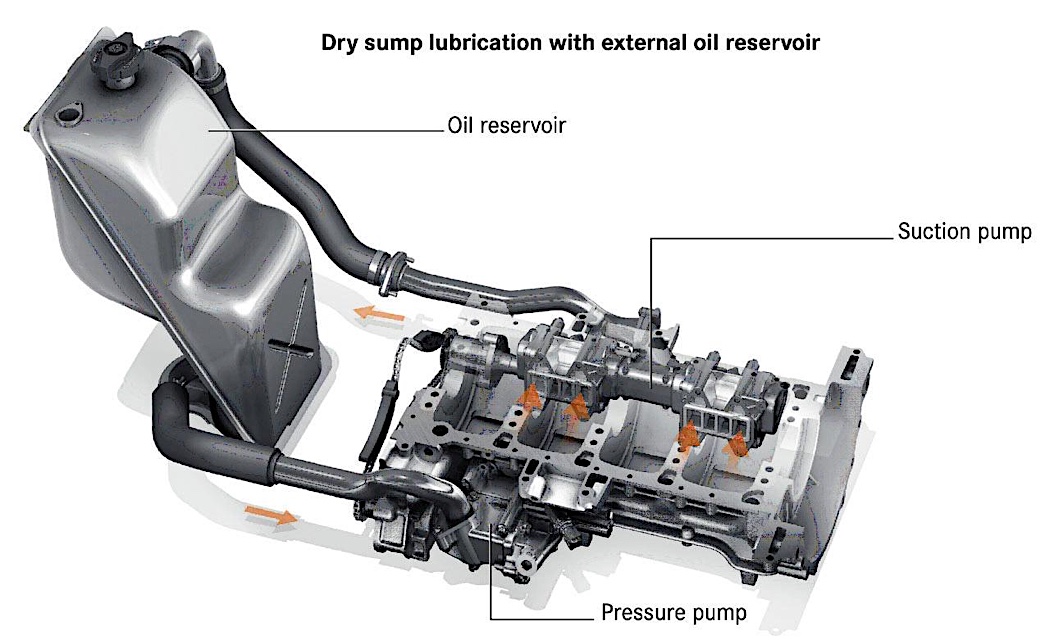 More comprehensive systems will utilize the pump for supplying pressure as we mentioned before. This also makes it easy to add an oil cooler. Some guys put the cooler on the scavenge return to the tank, some on the pressure supply to the motor, or even both. I personally want to keep the oil as hot (and thin) as possible in the tank so my cooler is pre-filter. 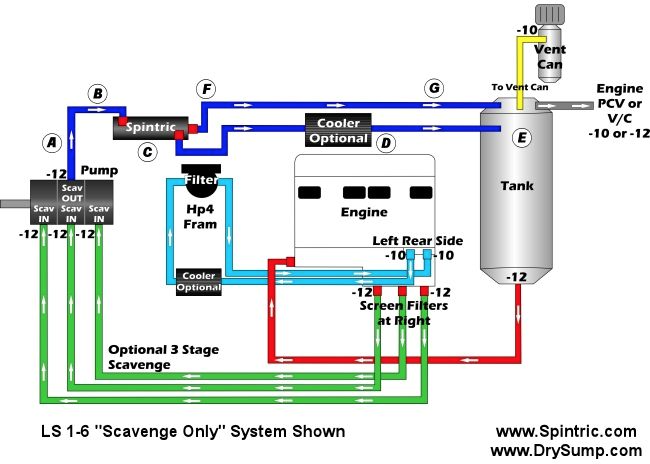 You will need to figure out how to drive the pump but if an ATI crank damper is available for your motor, ARE makes drive mandrels which are designed for the ATI bolt pattern.

I hope it’s now clear(er) that a dry sump system isn’t just about ensuring an oil supply. But since it is the primary goal, I will briefly mention accumulators here. It was something that I tried and I don’t think it’s an idea without merit. Accusump and others make what amounts to an oil capacitor – something that stores oil under pressure as it is fed, and if the feed pressure drops, it releases the storage, maintaining oil pressure… in theory. 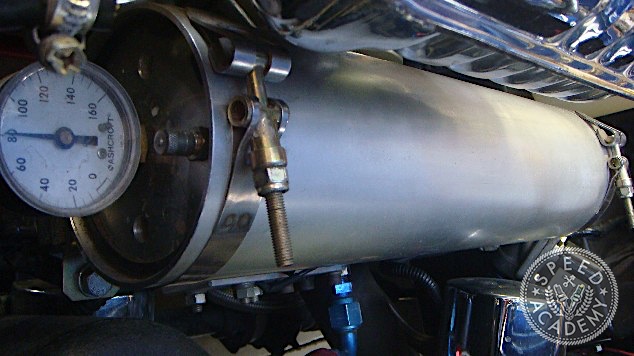 The main problem with accumulators is that they’re a crutch and not a solution. As such, they have limitations. As an emergency measure, it’s better than nothing. But it needs for starvation to occur in order to work. Then it needs to react and it isn’t physically possible to do so instantly. I base this on second hand info but I’ve been told by racing engineers that unless the accumulator is placed practically right at the engine oil inlet, like on the motor mount or frame rail, by the time the pressure drops (and if setup that way, the solenoid opens), it will not react fast enough. Depending on the stresses the crankshaft is seeing, it takes very little time to do serious damage. You also ideally need to have a way to prevent the accumulator from back-filling the starved oil pump/pan via check-valve. To be clear, I am not saying accumulators are useless but they are not a solution, any more than a spare donut is a solution for a flat tire.

The reason it took me so long to switch to dry sump oiling is the same reason I’m sure is holding you back: it’s expensive. But I got to the point with my car where the cost of a dry sump system compared to the high likelihood of damaging my engine due to starvation, thanks to the forces my car was now capable of generating, turned it into a downright cheap insurance premium.