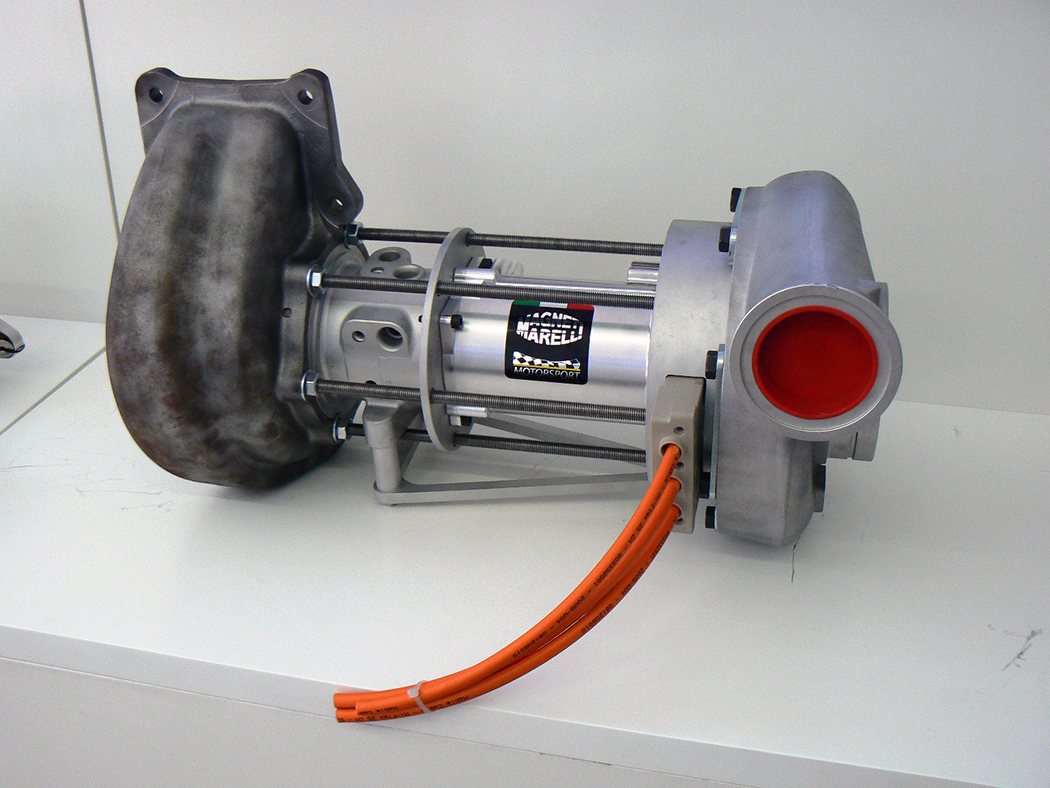 Early images of a few of the new F1 hybrid turbochargers (like the Magneti-Marelli unit above) showed that the TERS motor-generator would be mounted inline with the turbo’s shaft, between the turbine (hot side) and compressor (cold side), such that it can recover thermal energy that’s normally dumped out a wastegate. The recovered energy can then either be stored for later release in the battery pack or routed directly to the rear wheels via the KERS motor-generator. The net effect of linking the turbo, TERS and KERS systems in this way is the recovery of enough heat energy to send electrified power to the drive wheels for almost an entire lap, not to mention boosting engine output by a little over 160-hp.

Actually, there is one other intriguing application for the stored TERS energy, where it’s sent back to the turbo to maintain turbine speed. This reduces inertia during the transient phase, which not only reduces turbo lag, it also minimizes compressor surge. So by using the TERS motor-generator to maintain turbine speed, F1’s engine building geniuses have found a way to both enhance turbo efficiency and reliability at the same time. That’s some high-tech win-win going on right there, not to mention both are a necessity under the 2014 F1 regulations since the cars must carry less fuel (140 liters, down from 230 liters) and their engines must last twice as long (5 engines permitted per driver for 2014 and then 4 per driver in 2015, compared to the 8 per driver permitted in 2013).

Some early engine design images also suggested creative packaging might be used by some of the teams/manufacturers, with the compressor sitting ahead of the engine and a long shaft linking it to the turbine through the upper part of the “V” section of the V6. At the time this was thought to have advantages and disadvantages, the upside being a cooler location for the compressor and more compact and space-efficient intake and intercooler pipework (which would reduce lag), while the downside being a longer, heavier turbine shaft that would contribute to torsional and inertia issues as the turbo spools up. 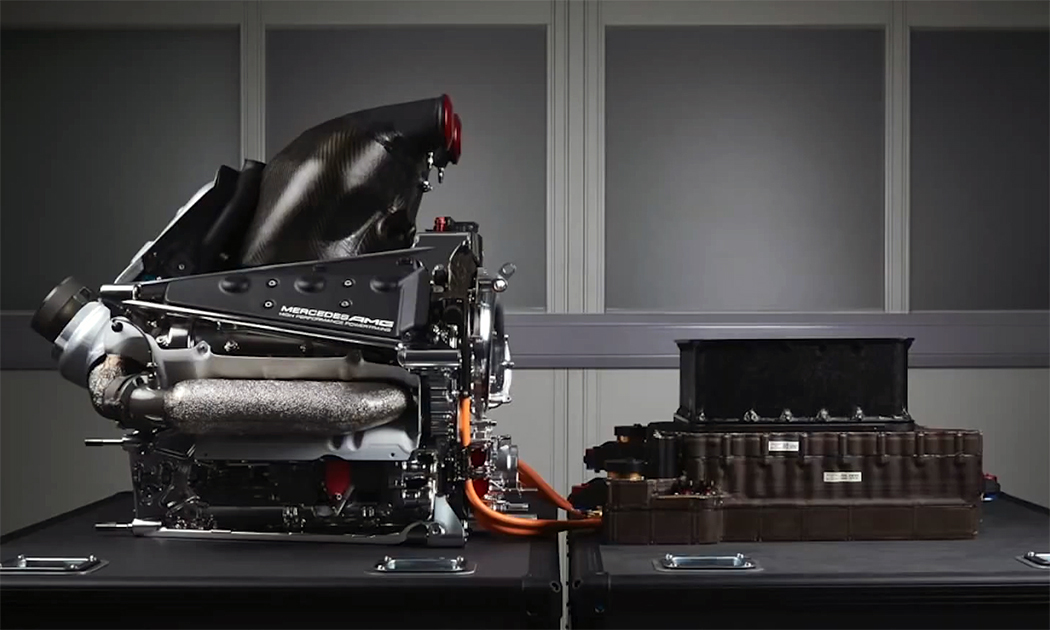 But in the end, the Mercedes power unit used a much more compact log-style manifold and moved the compressor to the front of the engine, with the shaft linking it to the rear mounted turbine running thru the ‘V’ section of the engine in a brilliant use of packaging.

As it turned out, Mercedes was the only engine manufacturer to locate the compressor on the cooler front side of the engine, even though early images from Mercedes showed a more traditional turbo turbine and compressor combo at the rear of the engine. This may have been a case of bait and switch by Mercedes, or perhaps the decision to locate the compressor at the front of the engine came later in the development process, once they overcame the challenges associated with such a long turbine shaft. Whatever the case may be, as it turned out, this decision was a master stroke that won Mercedes both the 2014 Manufacturers’ Championship and the Drivers’ Championship, and not just because the compressor was isolated from the heat of the turbine and thus able to cram cooler air into the little 1.6-liter’s combustion cambers.

As F1 expert Craig Scarborough describes in this video, the packaging advantages of moving the compressor to the front of the engine had a cascade effect for Mercedes, allowing them to move the transmission further forward and thus improving weight distribution and chassis balance and helping to explain Mercedes’ advantage in the corners. The front mounted compressor also allowed for the aforementioned shorter intercooler piping, but it also allowed for a smaller intercooler, which meant Mercedes could use smaller side pods and this paid off in improved aerodynamics. And that log-style exhaust manifold is also worth mentioning, since traditionally F1 engines have used very complex long-tube manifold. There is likely some loss of scavenging because of the log-manifold, but because of its much tighter packaging, again Mercedes was able to design a more streamline shape and this paid bid dividends in the wind tunnel and down the very long straightaways that are typically found on F1 circuits. 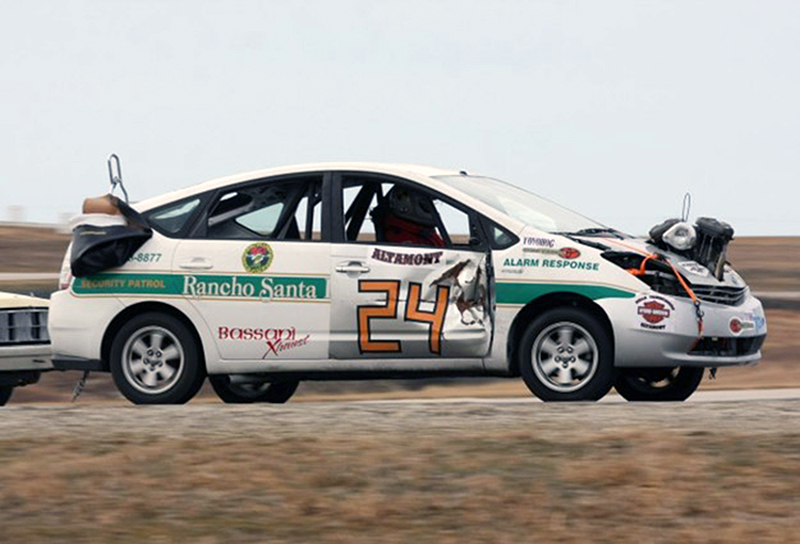 So why does any of this matter to regular Joe Schmoe weekend warriors and grassroots racers like you and me? Well, although it’s certainly a ways off, there’s every reason to believe this type of hybrid electric turbocharging system will trickle down to the auto industry and to the performance aftermarket, where TERS systems will undoubtedly be used to boost the performance of high-performance road cars. And with the TERS system being able to optimize turbocharger turbine speed, the potential is there to run higher boost levels without increasing turbo lag or wear and tear on the shaft bearings. There doesn’t appear to be any downside to TERS, other than adding a bit of weight and complexity to the overall engine and drivetrain package, and it really shows the world how hybrid technologies can be just as relevant to go-fast geeks like you and me as well as our treehugging cousins in their slow-moving Priuses. 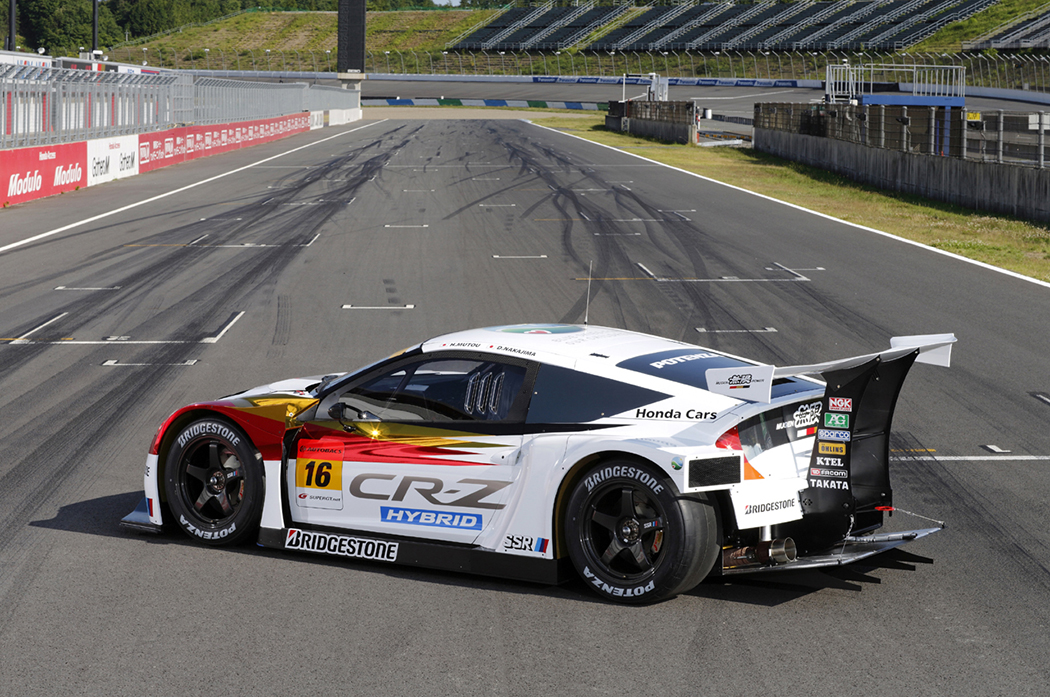 The more complete integration of TERS and KERS technologies on road cars will also extend the life of the combustion engine, since the energy generated by fossil fuels will be more fully utilized. That means we’ll all get to enjoy the sound of a proper suck-squish-bang combustion cycle for a lot longer than Tesla Motors would like, plus the performance aftermarket will get to embrace a new type of turbocharger and maybe even find ways to squeeze a little extra juice out of the hybrid-electric system. Can you imagine a e-turbo version of the CR-Z Hybrid race car tearing it up at World Time Attack? I can, and I think it’d be pretty frickin’ awesome. 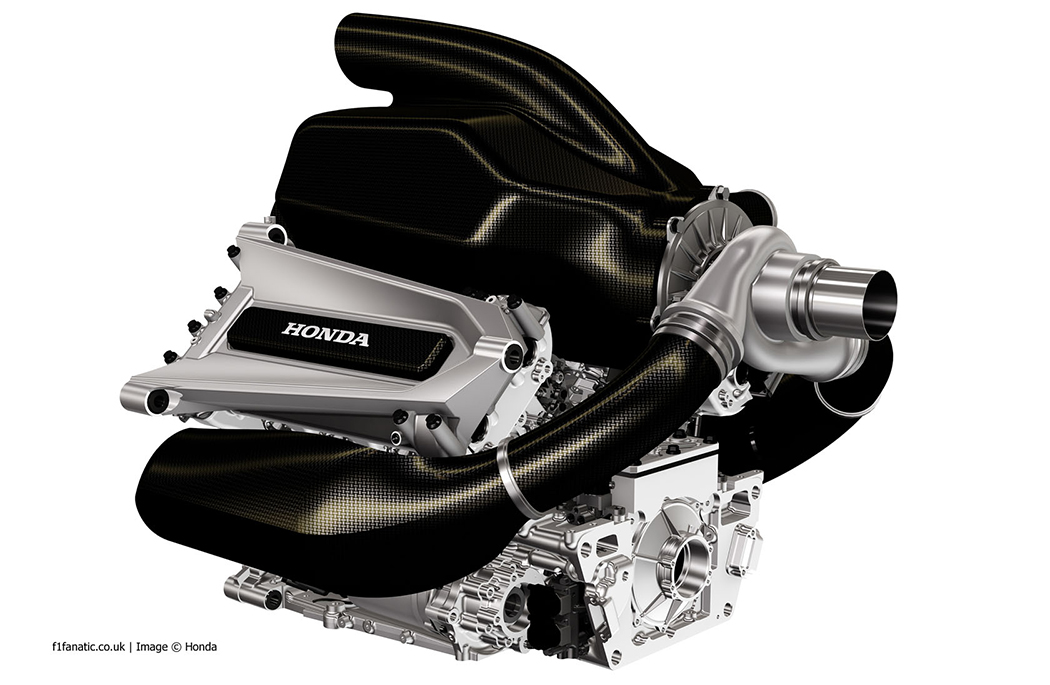 As uninspiring as the F1 engines sound this year, I have to say I’m pretty stoked about the technology being developed and how feasible its integration is on future road cars. I’m also a long-time Honda fanboy, so I have to admit I’m also pretty stoked to see the big red H back on the nose of a McLaren as their engine supplier starting in 2015, a partnership that won four F1 championships from ’88 to ’92, not to mention giving us the legendary Senna/Prost rivalry. With the torque these new hybrid-turbo V6 engines will produce, it’s also been evident this season that managing rear tire slip has helped separate the top drivers from the rest of the pack, not to mention pushing Pirelli to develop a tire with more horizontal movement and slip angle capabilities. It really is an exciting time in the world of F1, despite how obviously disconnected from reality Bernie Eccelstone is, and the potential for technology trickledown is greater than even, thanks to the innovative ways the teams are implementing hybrid-electric technologies.

Story by Scott McIver from Kaizen Tuning I had heard whisperings of this legendary warehouse of Nissan legacy cars that existed hidden inside a Nissan factory. Together with a friend…