Off To The Treadmill…

The car was ready for the dyno. We spent most of the time tuning drivability and ran out of time to tune PID feedback boost control, so for now the car was spooling on fixed duty cycle and it would be much slower. Also, we made a mistake and misconfigured the VANOS so it stayed on all the way to redline, where it was supposed to be off after 5k. So the car should have made a pile more power past that point. But it still let the 9280 shine. Previously, we had to watch the turbo speed at higher RPM because it was overspeeding the 9180. This time, it made more power than ever and didn’t hit the 116k RPM limit of the turbo.

Here’s a comparison of our best pull with the 9280 (blue) to the last 9180 pull without feedback boost control (red). You can see that it spools only a little bit slower but BOY does it chug hard after that! 900-whp club attained!

Here I’ve added our best pull with feedback boost control with the 9180 in green. This should give an idea for what we can expect when we tune the PID feedback in the Infinity with the 9280. Also, remember that the 9280 here is also running with the intake cam 25 degrees too advanced thanks to the VANOS being on past 5k, and it still made over 900-whp.

We analyzed the data from the AEM UEGO, EGT and EBP sensors and it turned out that everyone’s theories about the back cylinder running lean were correct. Interestingly, cylinder 2 also needed to be trimmed out. The EGTs all remained perfect though, this is in no small part thanks to the E98 the car runs on. 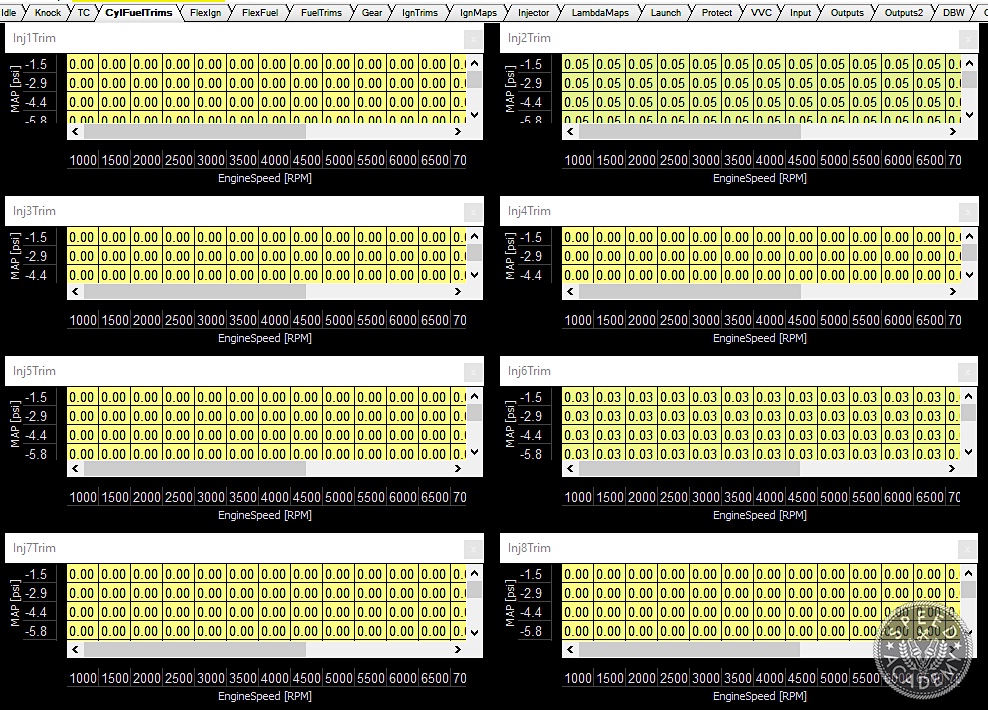 I also loaded the EBP data into AEMdata, and the two EBP signals showed an interesting thing about the two scrolls doing their job as you could see the two signals alternate. I created a math channel to take the max of the two and smooth the signal. 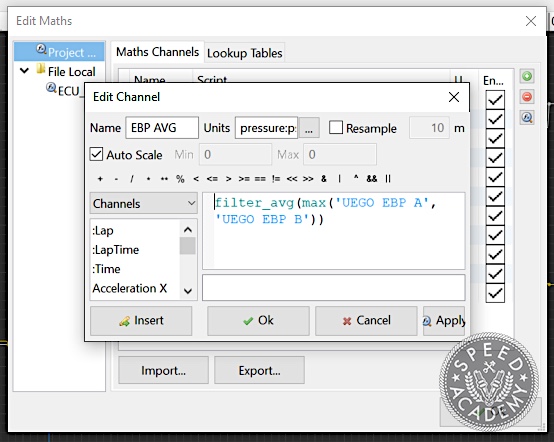 It looks like the turbo is a great match for my needs, and should be even better with the VANOS turning off up top so we likely won’t need as much boost for the same or more power. Past about 27 psi it begins to choke.

We’ll need to return to the rollers to tune the PID feedback boost control and with the VANOS operating correctly, but the car was ready for the track. 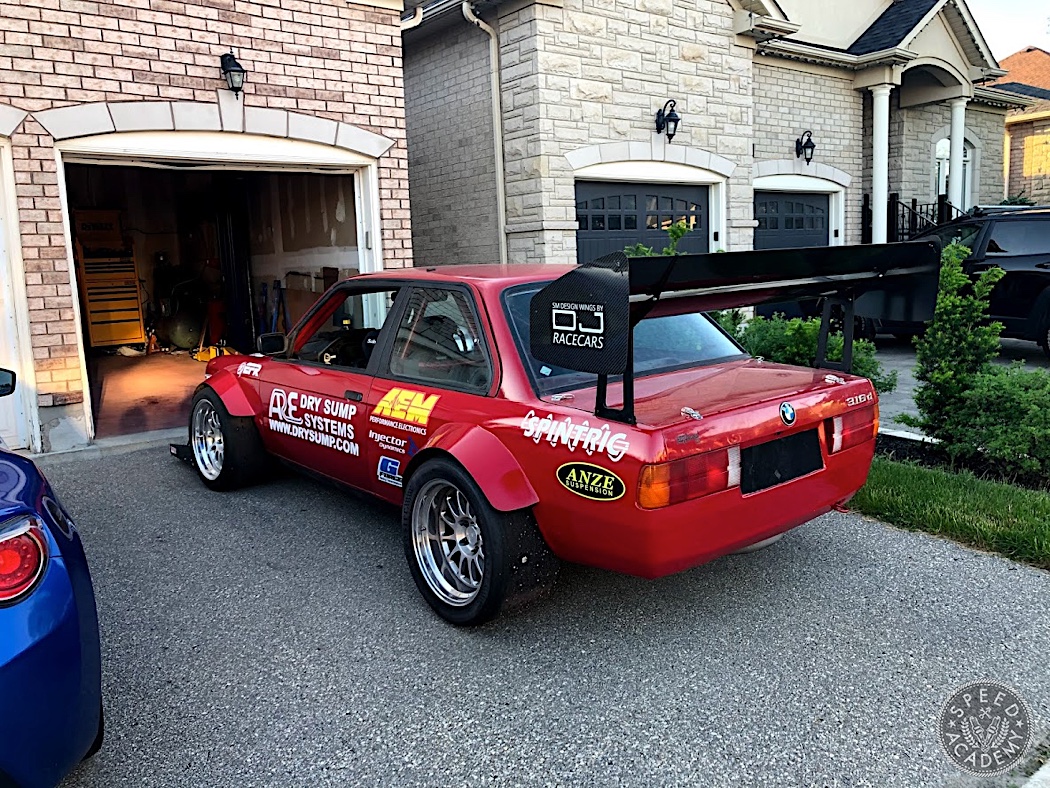 I loaded up the car and Das Hammer was off to his natural habitat: Mosport.

The track test went great and the most pleasant surprise was the turbo. Even without the boost control, the turbo regains speed so fast in transition that I wasn’t even feeling it. In addition to all the data that is natively supplied through the Infinity logs, I added some math channels to display the analog data I had, including the various temperature, pressure and speed signals, as well as the steering angle. 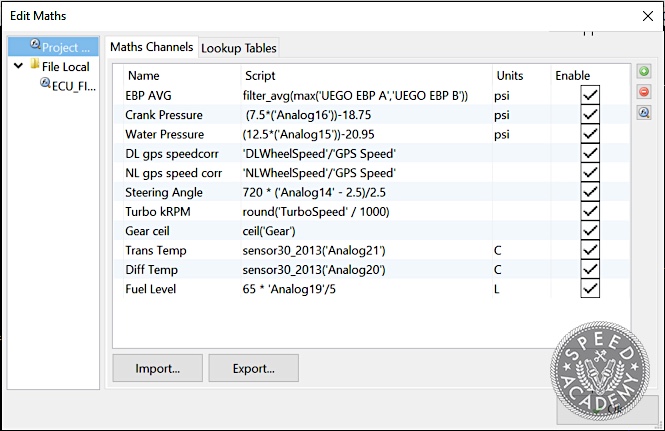 From there, it was easy to put the overlays on the video in AEMdata and I made this one to demonstrate what this 74mm turbo breathing through a 1.45 turbine housing with no feedback boost control does. It’s a session where I encountered a lot of traffic (had to give up eventually – wasting fuel and tires), and even though this is the Instructor group, it’s still an HPDE so passing is point-by only, so there was a lot of off/on part throttle stuff. Watch the turbo RPM in response to the throttle. It feels every bit as amazing as it looks. The car in front of me at the beginning is a heavily customized E30 with a big V8 and I think he wasn’t used to checking his mirrors. I could keep up with him at part throttle and I didn’t have any trouble keeping up from the initial dig because while his big motor torque hit instantly, my 9280 EFR was always ready to boogie.

In the last trip up the back straight in the video, I waited for the E46 racecar to move over and hit the gas when he gave me the pass signal. Let’s see how the big 9280 EFR responds.

Coasting, the manifold is in vacuum.

I start opening the throttle, the car is back in boost almost immediately.

I picked these points on purpose, as it directly compares to the data I had from the 9180. 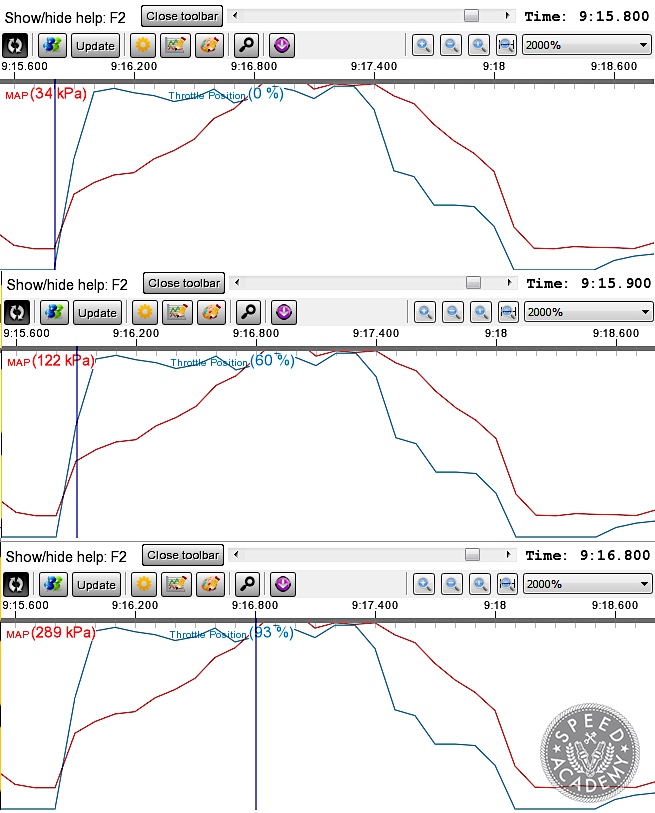 The 9180 took about 0.9s to get to 27 psi and that was with feedback boost control! Granted some of this could be due to my old ECU only logging at 10hz and the Infinity logging at up to 1000, and I set it to 100. But it’s still clearly respooling faster. How? It turns out that the BorgWarner wizards didn’t just make the new line of EFR turbos flow better to make more jam but they optimized the design of the compressor wheel so while being bigger and flowing a lot more air, it’s actually lighter, so the 9280 has lower inertia than the 9180! It’s truly my ideal turbo.

Then, in my second session, I was jamming up the back straight and I got a fuel pressure alarm. I pulled off and started checking. My fuel level was still showing 20L and with the swirl pot I should be able to run it dry before starving, so I assumed that one of my pumps died. I fired up the pumps and everything was running but the main pump was sounding really unhappy. I looked at the pressure and instead of my set base pressure of 60psi it was reading under 40. Could I really be out of gas??? I started adding fuel and the level reading didn’t change, and I could hear fuel hitting the floor of the tank. I ran it dry! I added 35L of fuel and the fuel level was reading 35L. My guess is that the float in one or both of the senders is stuck and doesn’t read below 20.

But anyone who has been around heavily boosted engines knows that running them out of fuel in boost is one of the surest ways to melt them down.  So why didn’t mine? The logs tell the tale. Many ECUs out there claim to be VE based and while that’s true, they’re not all the same. The Infinity takes a ton of variables into account to try to accurately model the fuel and air going in. As a result, when the fuel pressure (one of the parameters the Infinity uses in calculating injector flow, which it uses as a variable in calculating fuel flow) started dropping, it increased the injector pulse width to compensate. My ID1700x injectors had overhead left to compensate, so my air/fuel ratio barely went above target and the alarm let me know to get out of it.

I’d like to say that it was otherwise a glorious trouble-free weekend and I hit my goal of a 1:20 or faster lap time (which would be an Ontario Time Attack Open class record, currently held by a Radical SR8). When I finally got some clear track and went for a hot lap, everything was looking good and my VDM data on the CD7 dash was showing that I was on pace for a 1:22 but it was likely to be significantly faster as I was going to go a lot faster through 8/9/10 than the reference data, and MUCH faster than I ever had down the back straight.

I kept my foot in it up to the bridge at the end of the straight and I started drifting tight left to prepare for turn 8, while doing 280 km/h. There is a depression in the road on the left side under the bridge, I know it and was ready to correct. The car dipped in, I corrected. Then a beat later it started pulling HARD left and the steering went rock hard. I had a fleeting thought of “guess this is it” but stayed focused and fought the car to keep it as straight as possible while slowing down and staying out of the wall. I managed to aim it at the paved runoff and got it stopped just before the tire wall. The grass on the outside of the track is super rough and I also smashed a couple of cones so I was worried about the damage. The tow truck arrived and I got out to check things out. The splitter was busted and the fender and headlight on the driver’s side was bent, and the rear fender flare was broken off. 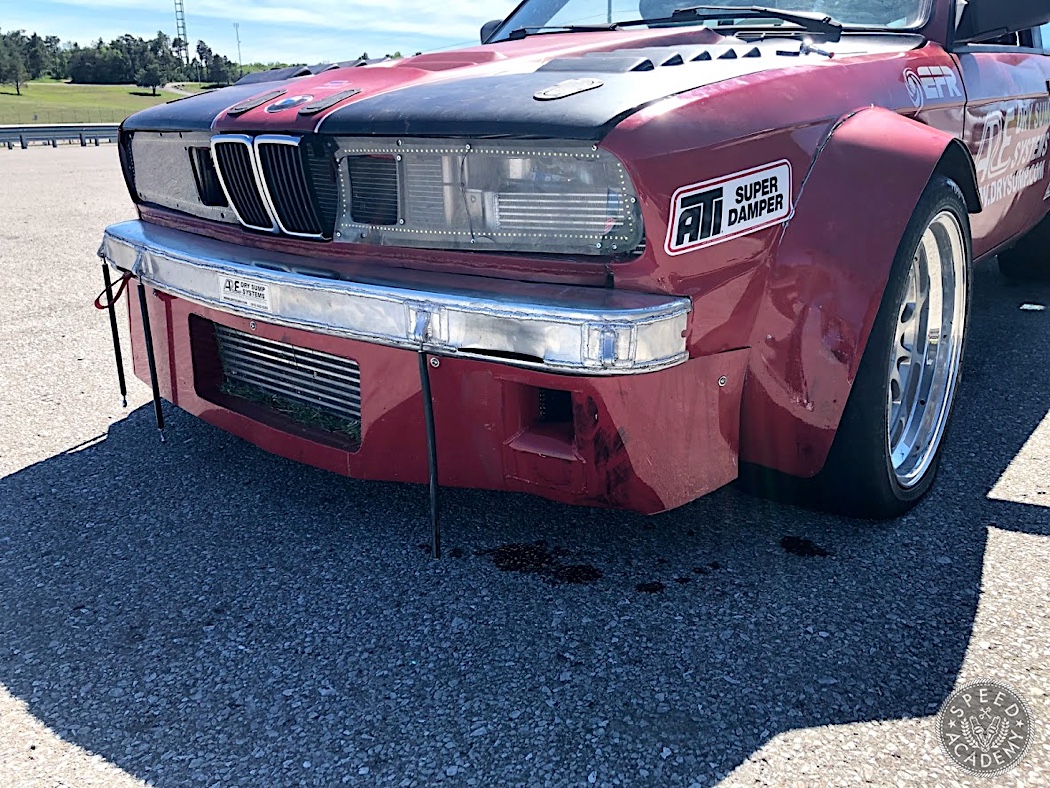 The tire was flat and after finding the puncture, I developed a theory I’m pretty confident in for what happened. Due to the increased front tire size and track, the front tires were wider than the splitter. The tire had a knife-like cut in it and the driver’s side of the splitter was broken off, and so was the carbon end plate. So my guess is that at this speed and downforce, the car bottomed out in that depression in the road, broke the splitter and the tire drove over the endplate. The broken splitter also cut and threw the accessory belt, so no power steering. The only non-cosmetic damage though seems to be a punctured oil cooler from the bent air dam. I bypassed it and the car ran and moved fine, enough to maneuver and get it onto the trailer.

On the positive side, I now finally have an excuse to redo the fender flares, which I made when I was just learning how to weld and work with metal. Here’s the general direction I’m headed. 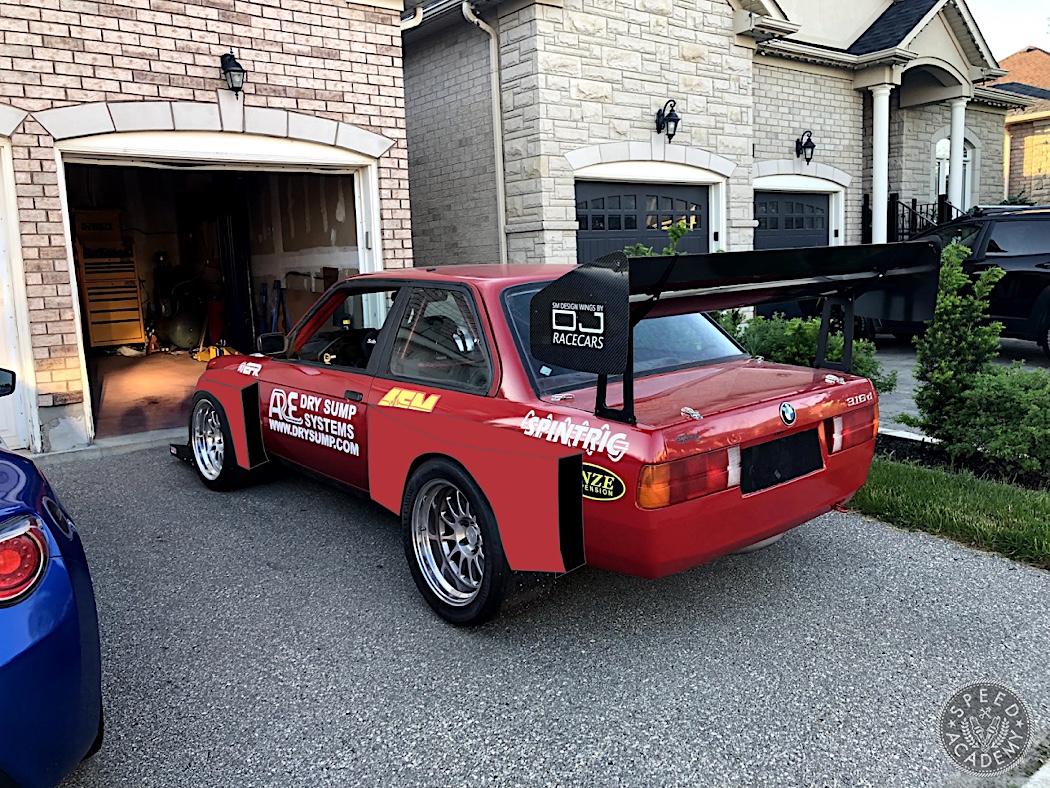 I’ll try to get them done in time for August. We’ll hit the rollers again to finish tuning the engine with feedback boost control and VANOS working correctly, and then back to Mosport for another shot at a personal best lap, and maybe a record.

There will also be some more cool additions going in which I really wish I had for this weekend but just ran out of time. The signals are all wired in just need to install the sensors. With these guys from Stack I could have been able to look at the slower early sessions and see how far the car is compressing at the back straight and in that depression, which I’m now going to avoid. 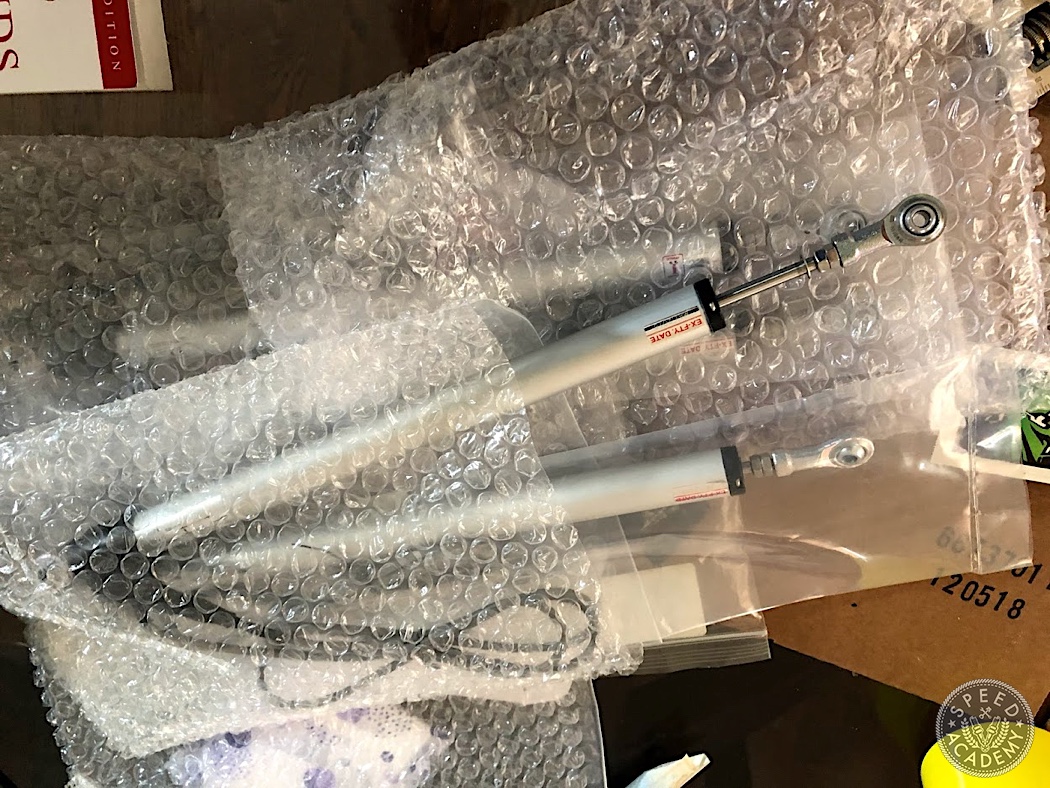 More to come on these magical shock pots in coming stories and videos on the Speed Academy YouTube channel.

If you’re idea of a a cool street car is a vehicle that omits the gawdy body kits and high rise wings and instead is more or less a clean,…