By this point, there are literally just a few small things to wrap up and we’re done! The majority of the hard work has been covered off in the first three parts of this series but the finishing touches aren’t to be overlooked as they can be just important as installing the engine itself. 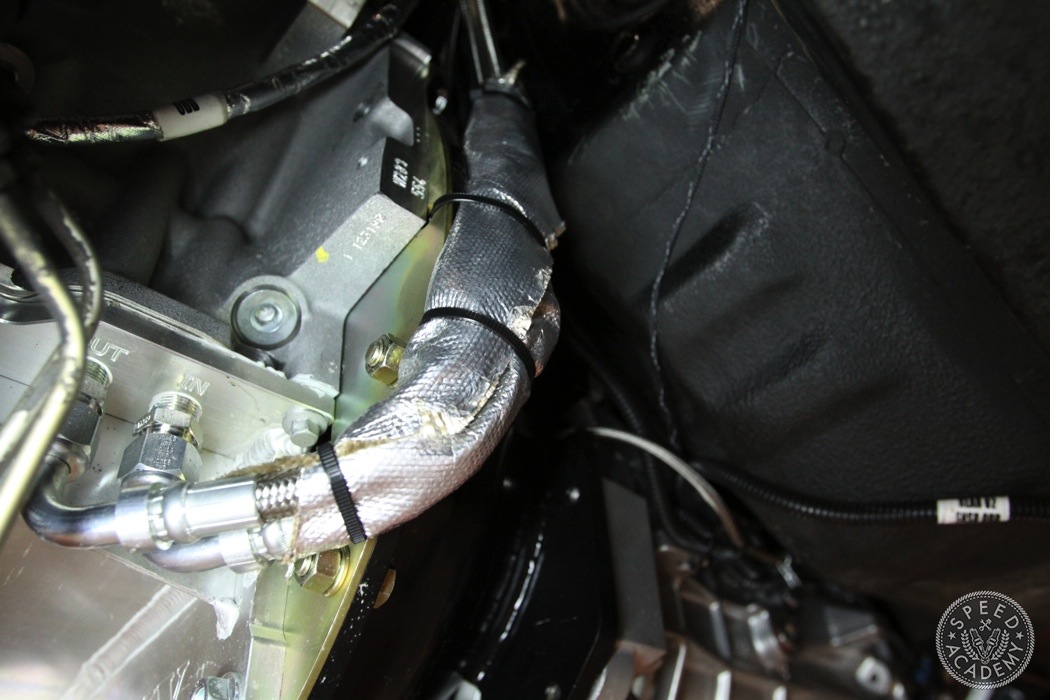 Let’s start with some heat protection. The remote oil filter lines are in a particularly ‘hot’ area being exposed to the cats and exhaust manifold. I used some DEI heat shroud here which, withstands up to 2000 Deg F radiant heat. Use this anywhere you see potential for sensors melting or heating up oil or coolant lines. 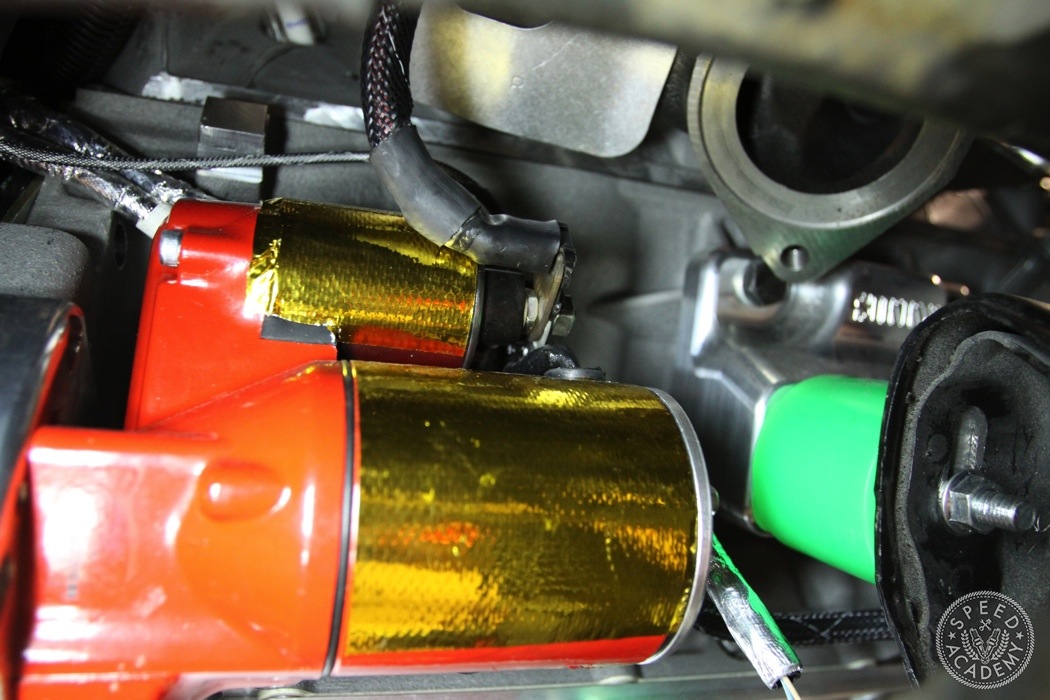 Heat kills a starter really fast and it’d be tragic to destroy that new MSD unit. So a little DEI Reflect-a-Gold metalized laminated glass cloth was used to protect the critical working parts of the starter. 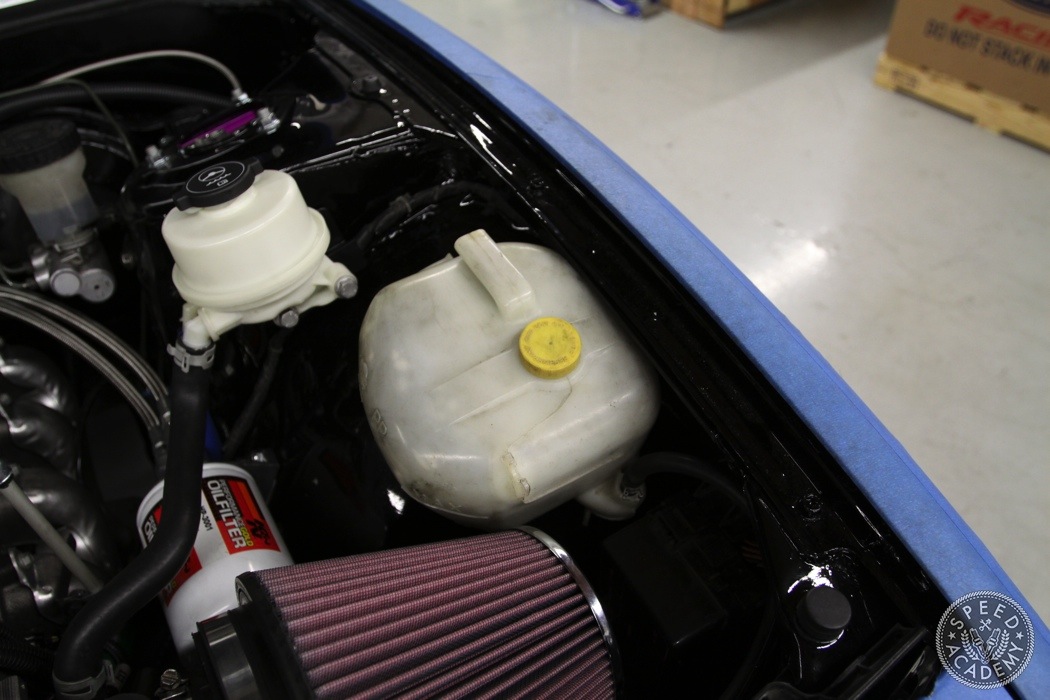 The coolant overflow tank is usually located on the passenger side fender well but because that’s where the new GM relay control box now resides it found a home on the opposite side and actually fit remarkably well. It even bolted up into an existing hole! 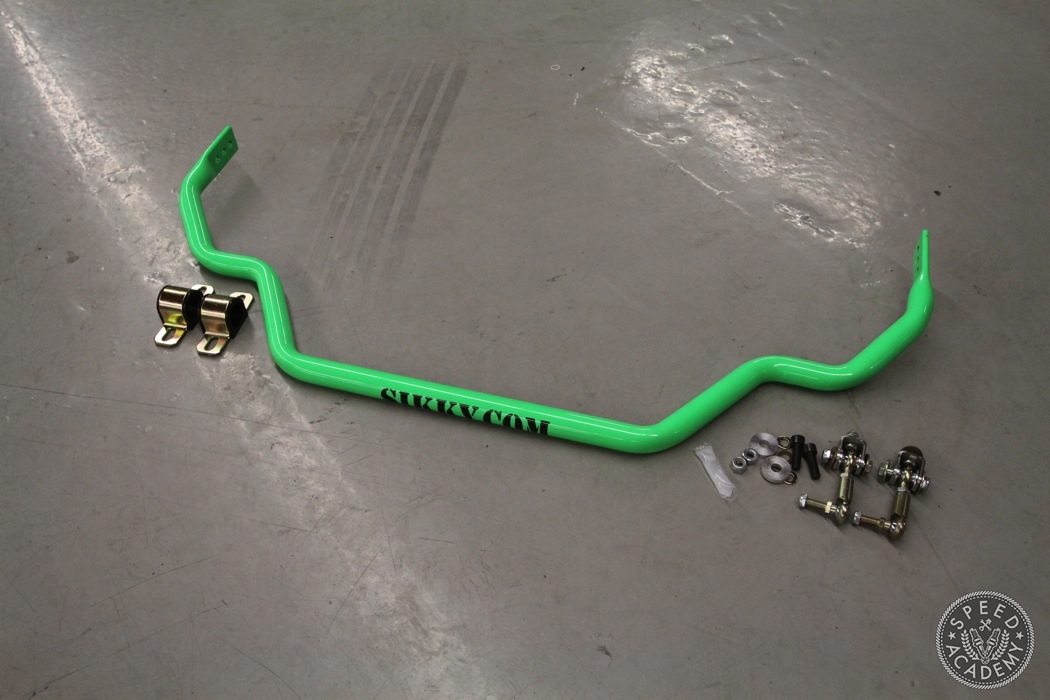 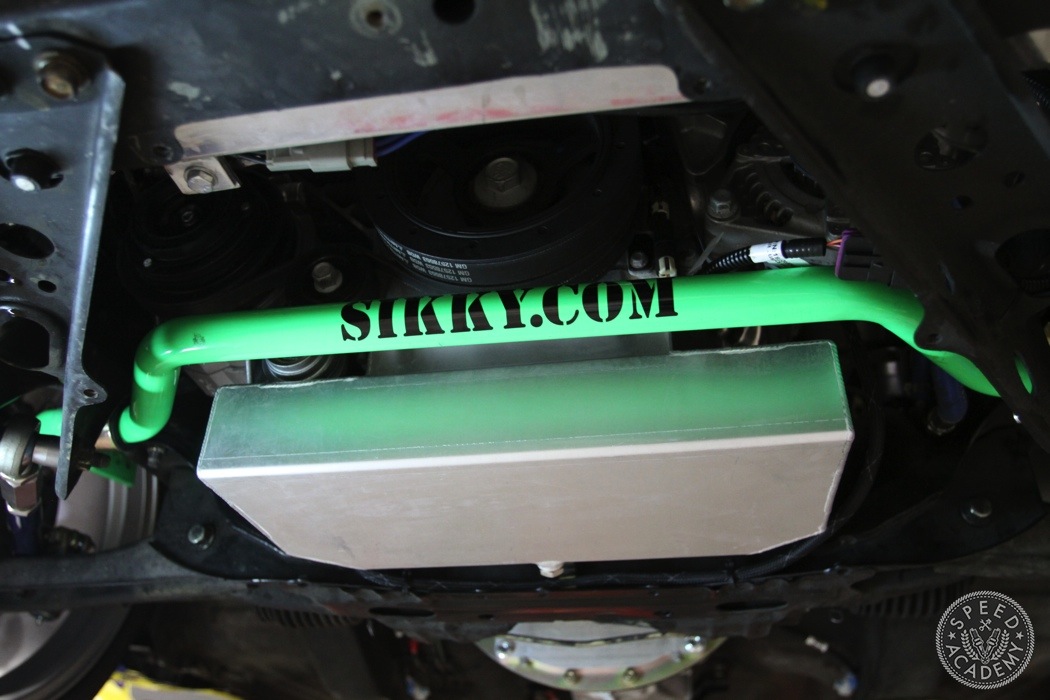 The front OEM sway bar will not clear the Sikky oil pan so you’re going to have to either run without one or buy the Sikky sway bar that is built around the oil pan. It’s a very beefy looking bar so I’d upgrade the rear at the same time. Then again, I have zero track experience (I’m just going off what I know about sway bars) with this setup so you may just want to test it before doing anything. 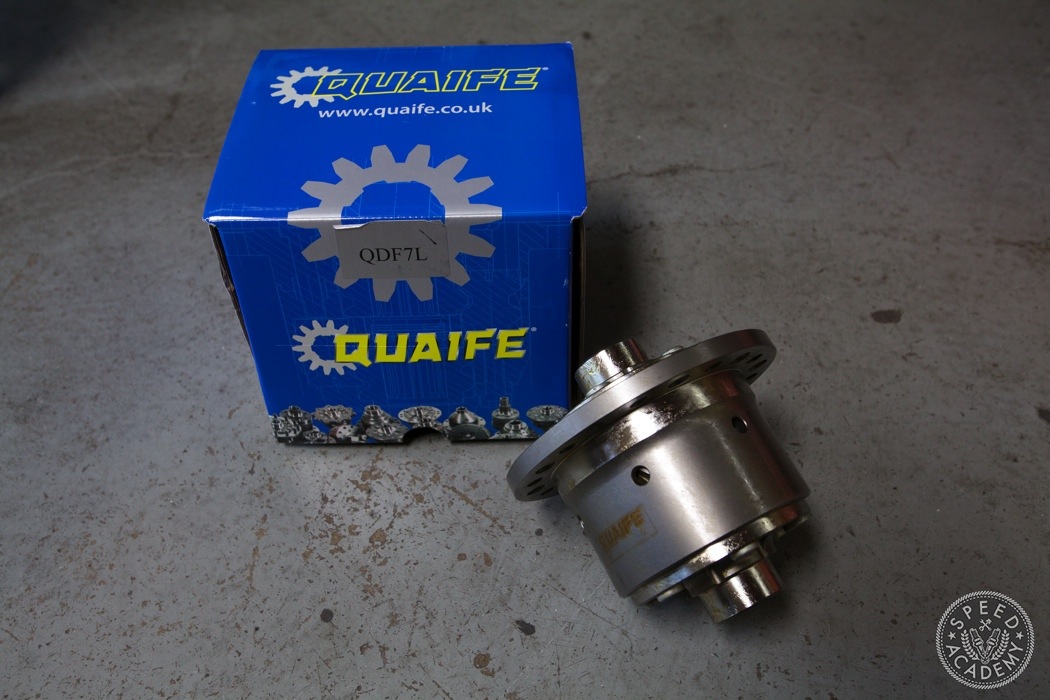 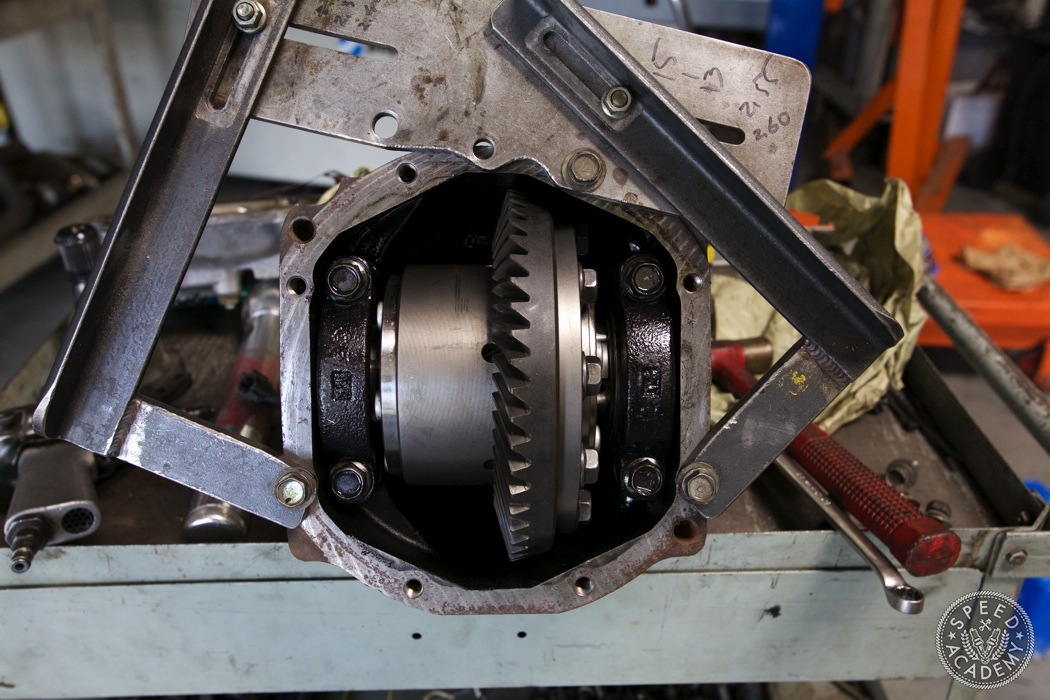 A critical yet often overlooked upgrade is the differential. With all that torque and power you’re really going to want to be able to lay it down to the pavement. The stock VLSD or even worse, open diff that usually comes in most 240’s isn’t going to be any good. A Quaife Helical limited slip differential is the ideal upgrade as it distributes power equally and is very progressive in its behavior. It’s also silent which makes it ideal for street use. To this day, this is my favorite diff that I’ve upgraded to for a predominantly oriented street car with the occasional track day. 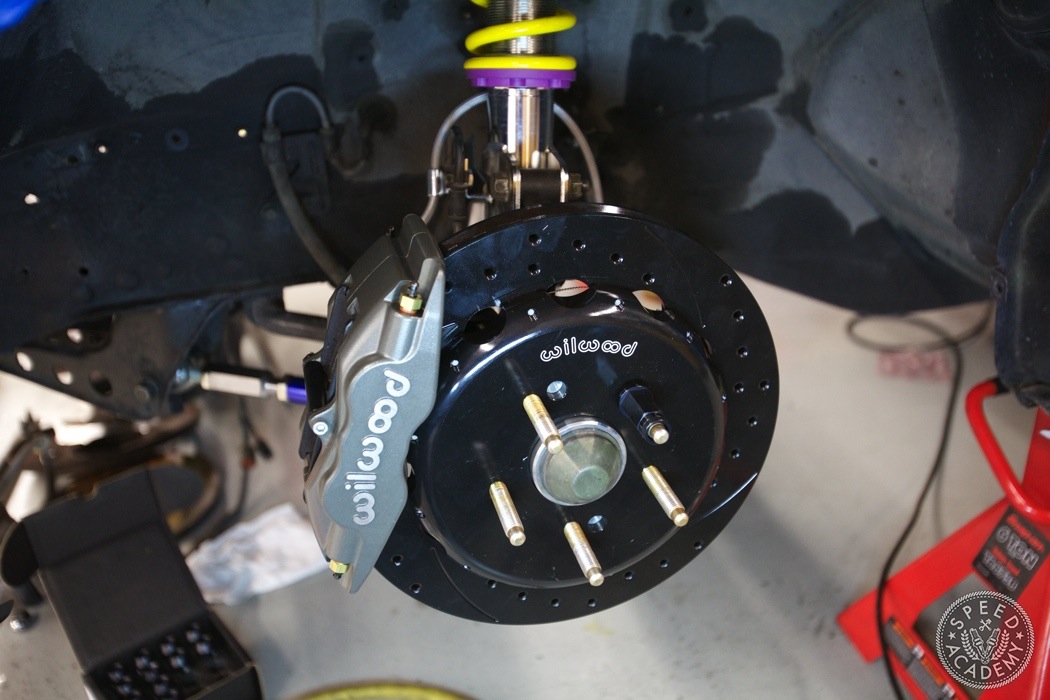 Brakes, you need bigger stoppers… Period. These Wilwoods are a great price ($1,100) and provide ample clamping force for all 430 tire smoking ponies. 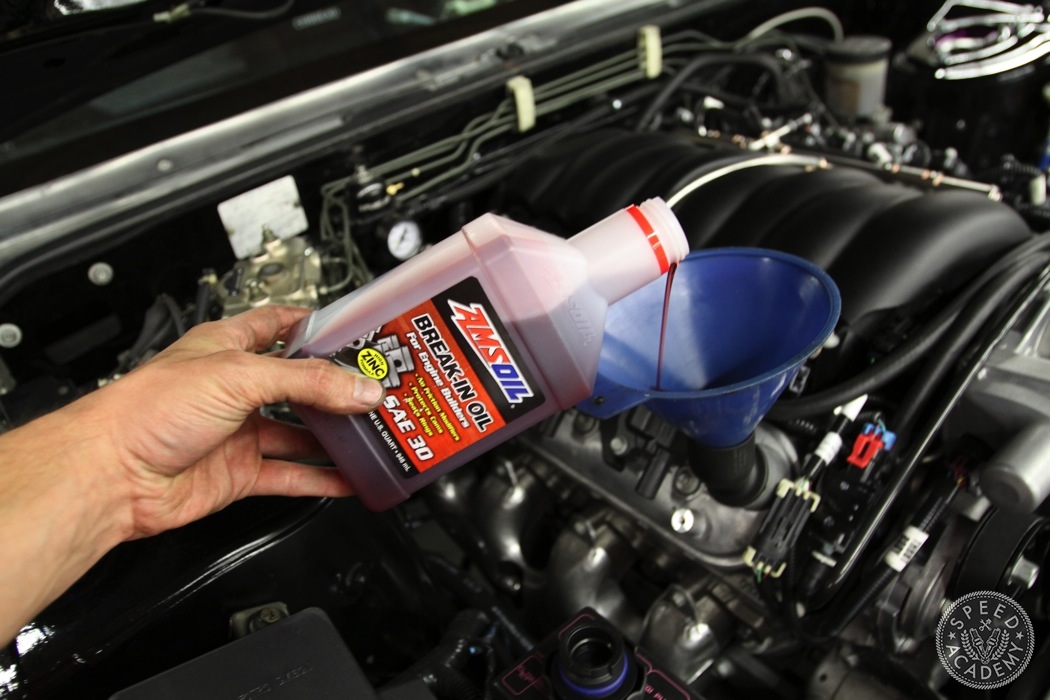 If you end up using a brand new crate engine from GM, they have a specific break-in procedure outlined in the manual that comes with the engine. You’ll have to break it in which, is harder than it sounds because that means staying off the throttle for some 500 or so miles. 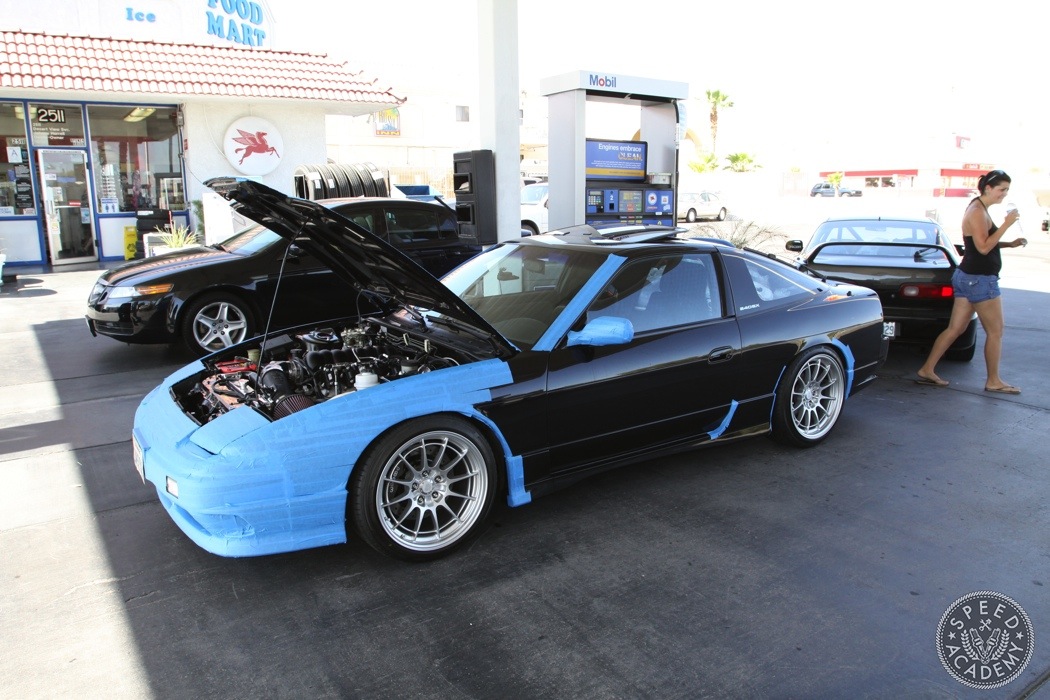 I put the LS3 V8 through my own break-in procedure or as I like to call it, the cross-country torture test. 3 days, 12-16hours of continuous driving, 3200 miles, and temperatures that reached over 125Deg F. There were some hiccups along the way but the car and engine made the grueling trek and didn’t explode.

What did I learn from it? Proper radiator ducting is key if you want to drive through the dessert in the middle of summer. Also, you could encounter vapor lock (where the fuel gets so hot it boils) like I did. You’d be surprised how much fuel cycles back to the tank during cruising. It doesn’t help that there are two cats very close to the fuel lines. Add scorching hot weather, driving in it all damn day and an issue that would normally never occur does. 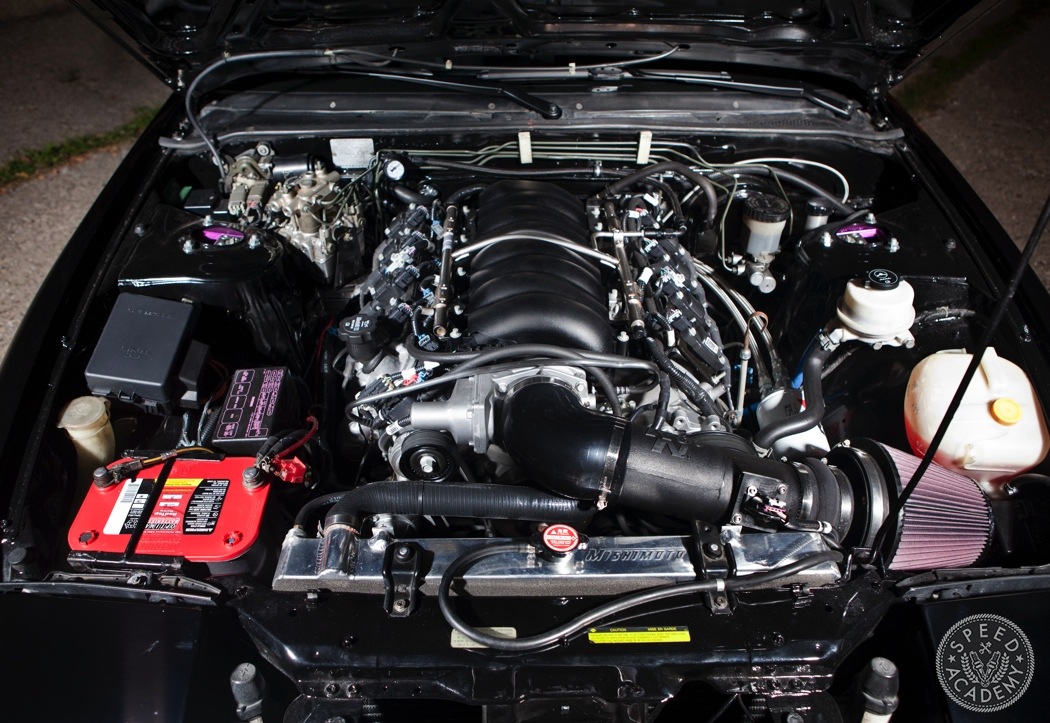 My other piece of advice is get some gauges to monitor the engine’s vital signs. Oil and water temperature and more importantly oil pressure. I’m not going to get into details of what happened because it’s hard to know the exact cause but my LS ran low on oil pressure and spun a rod bearing. This would have never happened if I was smart enough to install monitoring devices.

Over 10 years of building, driving, and testing cars I’ve learned that if you ever plan on running your modified vehicle at a track then gauges are a must. It’s such a small investment when you consider how much damage can be caused so learn from me and don’t run without them. Unless of course you’re building a show car because we all know show cars never need gauges but they always have them… 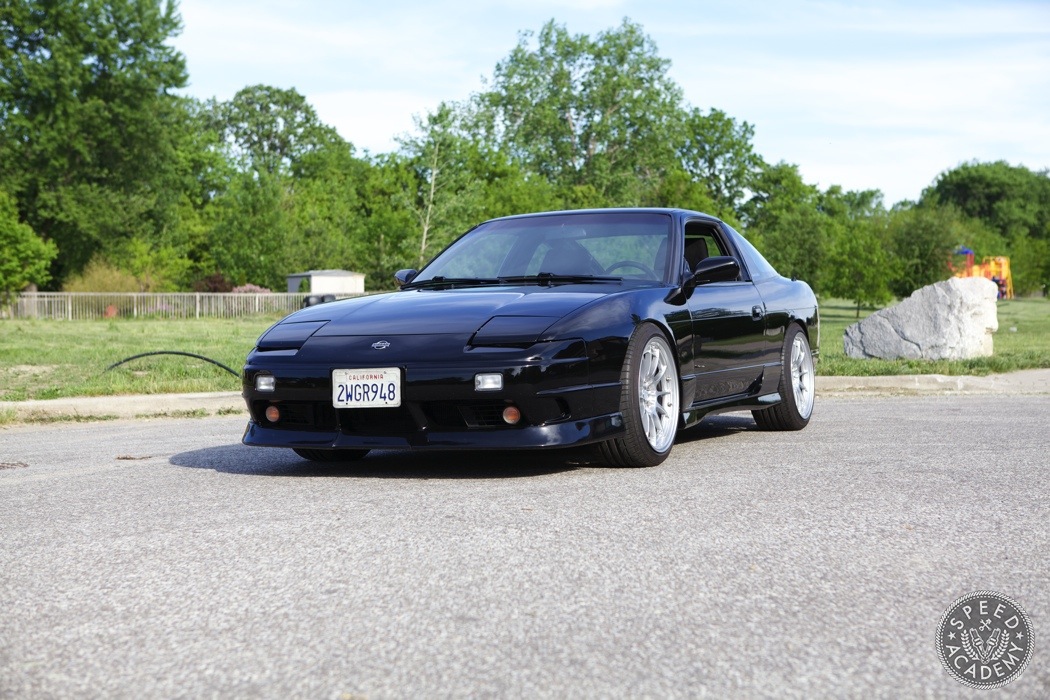 So how does it feel to drive this car? I absolutely love the engine’s power output. It’s on tap at all times and unlike the older LS engines, the LS3 doesn’t run out of steam until redline, 7,000rpm. Lighting the tires up has never been easier but when it grips watch out, the car hauls some ass.

The only downside for me is the T56 transmission. I hate the way it shifts. That’s probably because I come from a world of Japanese designed gearboxes and they are so light and precise. The T56 feels like you’re shifting a tank transmission with all the force required to bang a gear. However, when you have that much torque parts have to be beefy so it’s understandable. 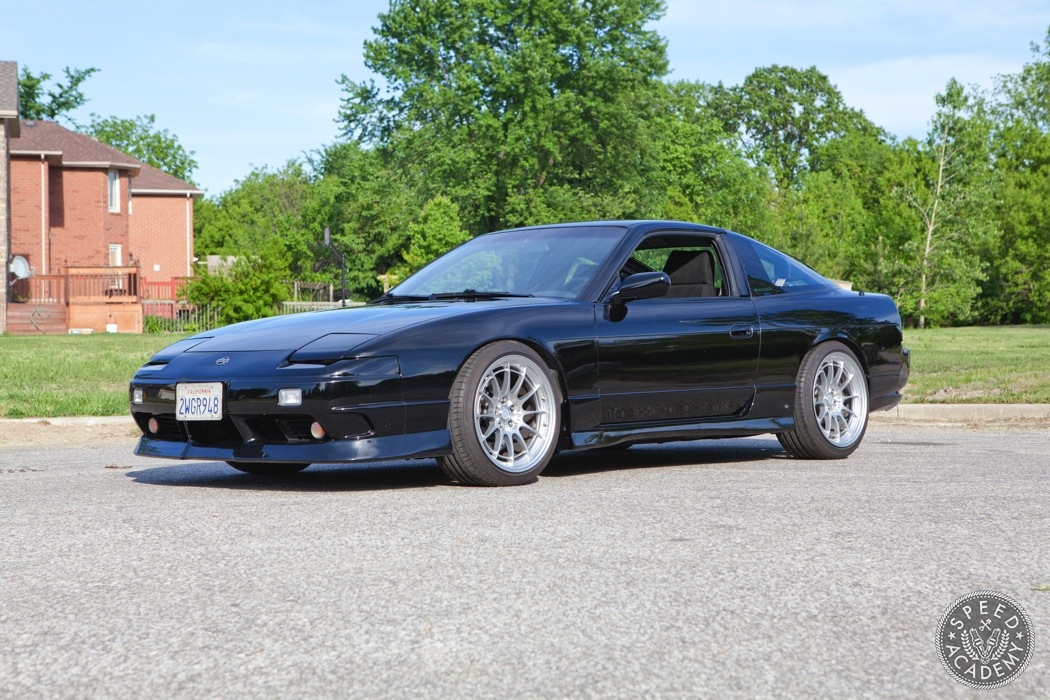 I’ve since sold this car to a gentleman in California who has legally passed smog with it and that makes all the hard work, time and effort put into this swap well worth it. California is horrible when it comes to engine swaps and even getting this one to pass was tricky but it can be done. Having a legal 430hp V8 in your 240SX is a wonderful thing and hopefully much easier task to accomplish thanks to this guide.

If you find it helpful in any way take a moment and leave some feedback below. Or if you’d like to tell me that a V8 in a 240 is blasphemous I’ll take that too.

UPDATE: Here’s a videos of the car running at idle and a quick walk around.

Awesome build, awesome car. You had great detail on the whole piece i’m sure this will help out a lot of people out there with their swaps, but please tell me that car had a/c. I don’t know the hell you drove in that heat.

This a great parallel to the build by ignition part of the motor trend channel on you tube hosted by Carlos Lago . Amazing similarities 93 240sx GM perf E-rod LS3 and new super duty T56 with T6060 internals. Way over the top build hell the brakes ( BREMBOS)  cost more than the car was worth, not to mention the power set all new. If you want to check it out series starts with IGNITION EP #84. Not really a how to more  blog of the build still a good watch. With some actual testing both before and after. the swap. Kind of the dream… Read more »

Really well done writeup. I was thinking about this as my next project.

nooneinparticular1 You definitely should think long and hard about it. This was one of my favorite projects because its such a great street car!

570lsx Actually, Carlos and I are friends and used to work together (I ran Modified Mag that was owned by the same company that owns Motor Trend). I helped guide him (so did these stories) with his swap so it was really awesome watching the car come together and presented to such a large audience!

AaronGalvez Haha, I drove it through the Arizona desert and let me tell you it was hell. The new owner of the car actually put AC into it and it functions 100%. I didn’t have the time when I was putting the car together but its nothing more than some custom lines and a bit of additional wiring to make it all work.

Loved the write up. Thanks for taking the time and making it available for us to read. Helps a lot as a reference to go back to.

If you were to add everything up minus the chassis, the total would be about $15,000 for everything. It can definitely be done cheaper but I say do it right the first time!

Hi Peter.Do you still make this kind of set up, where is your shop located? If yes, how much will it cost including the labor?

petertarach 570lsx That makes sense it all seemed to go pretty smoothly now I know they had an experienced had helping guide them. Well congratulations you can take a small bow for your unsung part in their success. I have since read the online account in Motor Trend  online and all the updates.Still think your writeup does a better job. I thought I detected a certain professional flair. The arrangement pictures and story all seemed vary well done to just be a fellow enthusisast. I never got the chance to read “Modified” now I wish I had. Probable just as well… Read more »

570lsx Thanks for the words and don’t worry when your tastes aren’t mainstream then it makes for some great and unique ideas!

This is an excellent guide. I plan to begin this build in about a year and have read plenty of write-ups. My only question with this build is a two-part one:

1) Is there a way to make this “tank transmission” shift smoother? Perhaps a hydraulic clutch? If you can use one of those babies, then how will it change fitment issues in the shifter well?

It’s not the clutch thats the issue its the shift lever pressure so you’re options are to use the stock lever which will sit a tad forward but will have a slightly lighter throw or swap over to a T6060 Magnum transmission which I have heard has a much better feel.

The T56 has always been known as a poor shifting transmission but you’ll get used to it quickly if you end up using it.

Awesome thread so easy to follow! My question is was the stock diff housing used and was the internals the only thing upgraded with the lsd components or was it a whole new diff, also were the standard 240 axles and hubs used. Thanks

Cheap, fast, reliable: pick two. We’ve all heard it, and we’ve all tried to defy it at one point or another. Cheating this formula is not easy, some might even…