It’s been a few long months since we had our first wheel to wheel race at Circuit of The Americas with Gridlife. Bonnie enjoyed going to Gapplebees, but she wasn’t doing the gapping. At first glance, I thought that these were a part of new race car teething issues. To top it all off, I ended up parting ways with the shop I was working with. Spoiler, this will be the final chapter of Bonnie the Corvette. 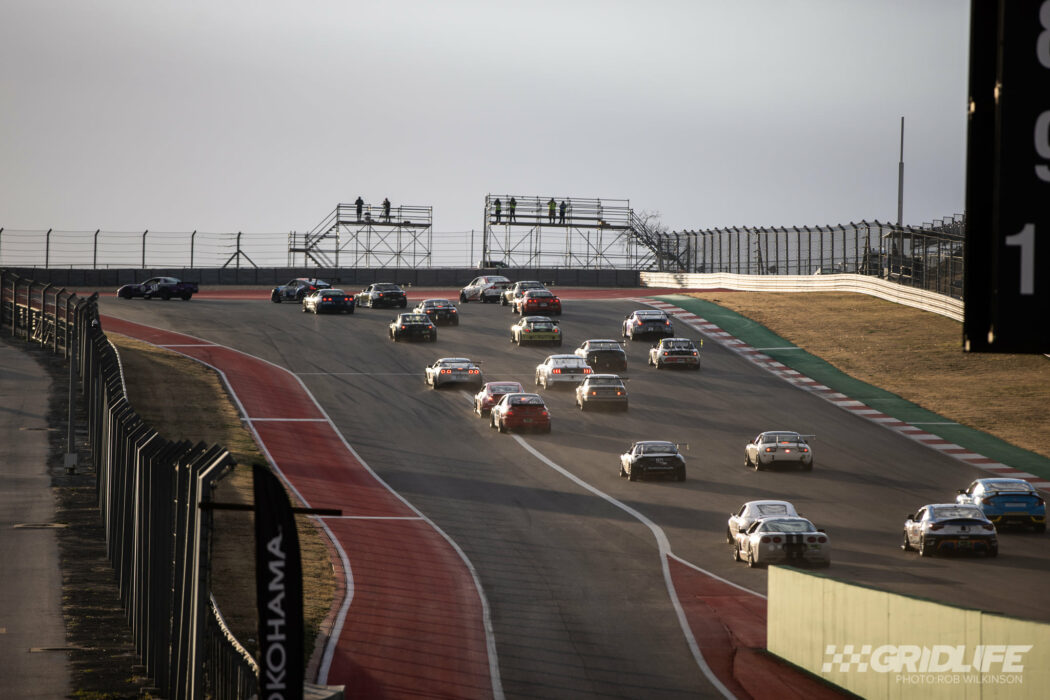 First race at day 2 at COTA. Seconds before running out of gas going into turn 1.

As I mentioned in my last article,  Part 4: When Being Prepared isn’t Enough; we talked about how the car wasn’t ready to be competitive. I left the article with me dropping the car off with the shop I was working with. Unfortunately, the car sat idle for a few months. While it was sitting, the shop and I had a conversation and decided to part ways. This left the car with more work to do than when I dropped it off. It now needed a radiator mount, new plumbing to the radiator, and the whole car needed to be rewired. Those were just the things that I knew about. 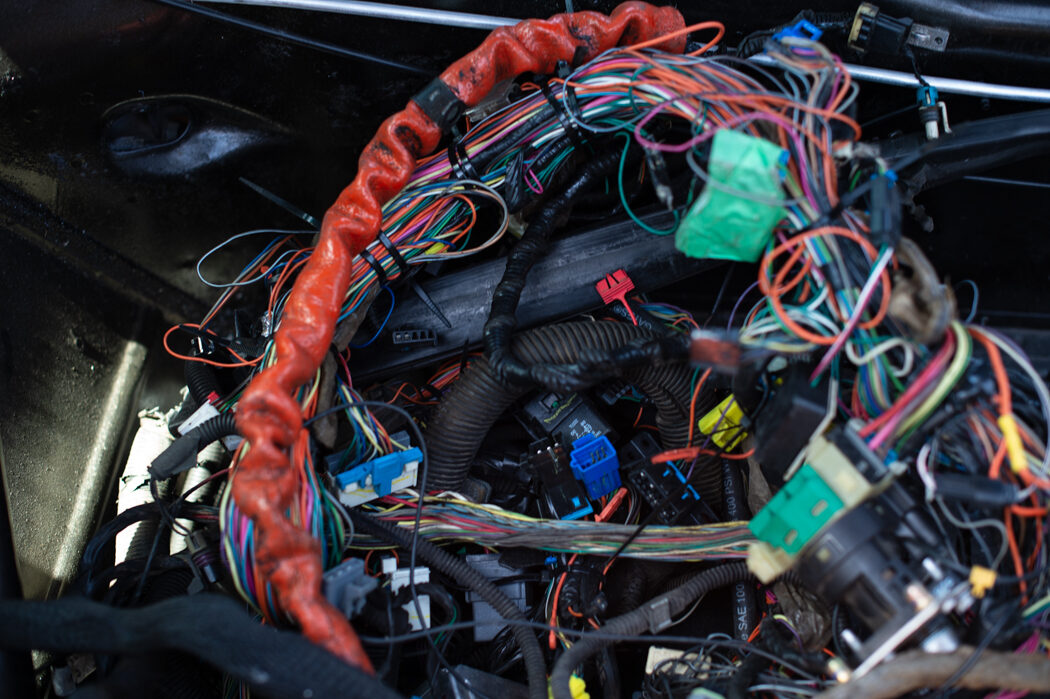 The old wiring harness and a plethora of other bits and pieces in the passenger compartment.

This was a valuable learning experience for me. You hear about shops that are experts, but that doesn’t mean you shouldn’t do your own due diligence. My sincere advice is to always reach out to their customers privately. Make sure to prioritize people that have recent experiences. You need to always have clear, open, and precise communication with them. This is not an option, it’s mandatory. If there is any breakdown in that, for whatever reason, it’s a major red flag. There is also a fine line between communicating and being annoying. I know it brings a great deal of anxiety for someone to have our precious, rubbish cars without our supervision. Resist the urge to message them every three days. Give them a solid chance to get some work down. It’s a quick way to get charged extra for labor. If you are being ghosted, that is a different story. There is a fine line, but the line is obvious. In fact, you should have clear deadlines before agreeing to bring the car in. 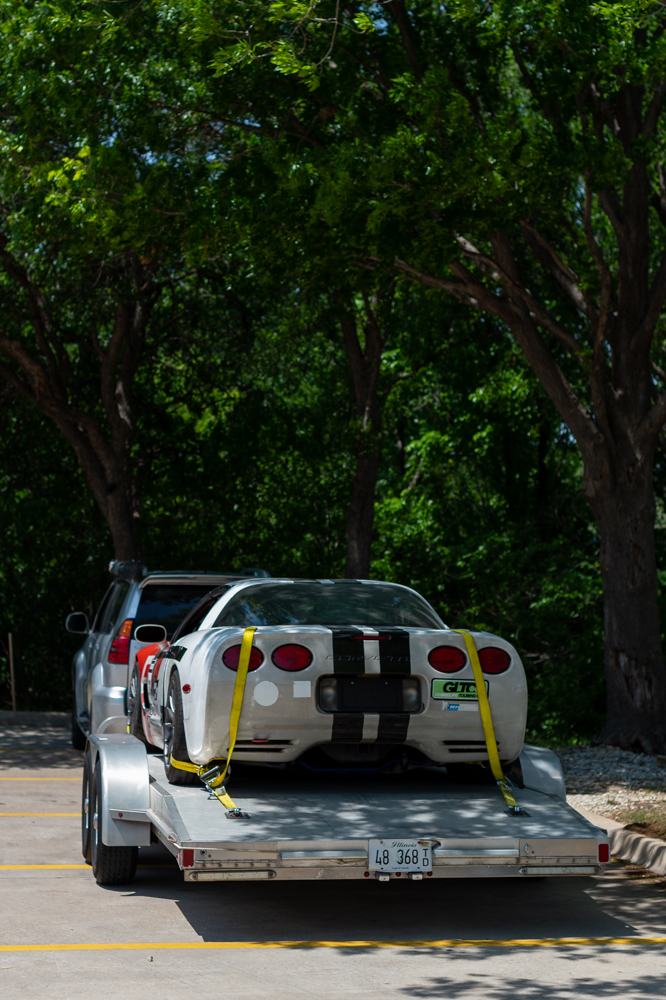 In Texas, in route to drop Bonnie off with her new owner.

Sometimes you have to know when to call it quits and a good indication is when buyer’s remorse kicks in and you’re thinking, “why the heck did I even buy this car?” Even though it was over a year since I’ve owned the C5, it never tickled my pickle like I thought it would. I thought I would feel the surge of Bald Eagles up my spine. An American Flag would be tattooed on my upper shoulder and a Harley-Davidson motorcycle would appear in my garage that I would name “My Hog.” However, nothing happened to me. I had these feelings long before I took it down south to that shop. I thought once I got on track with it, everything would change. It honestly made it worse. The C5 has a few things about it I had a deep animosity towards. 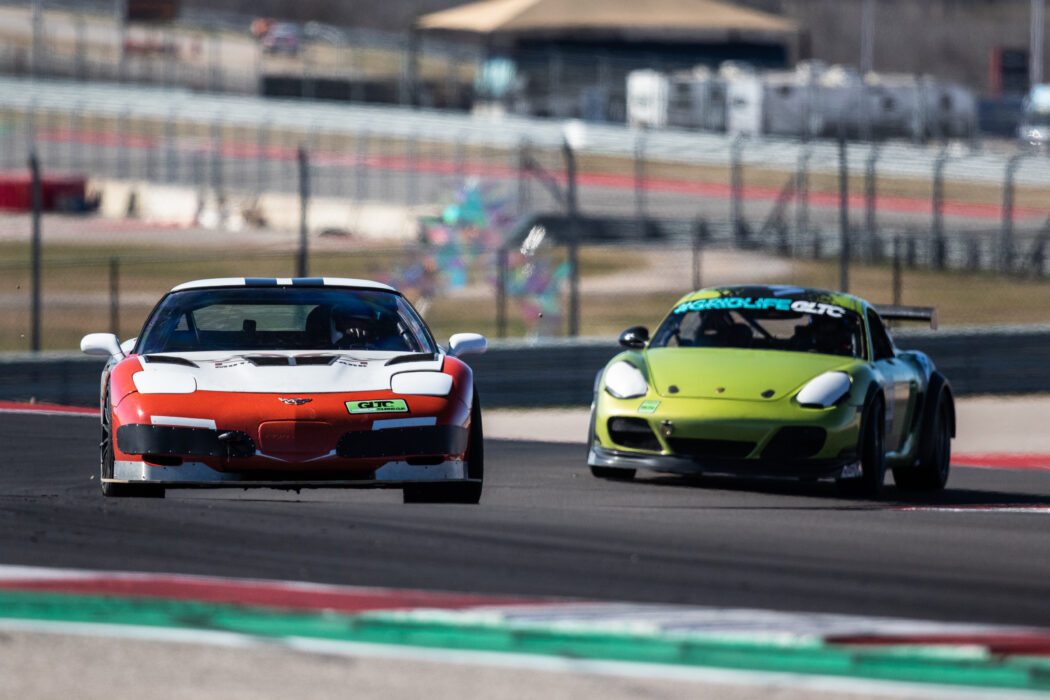 In the Esses being chased by a Cayman that is far faster.

Usually, people complain about how heavy the C5 feels, especially if you are coming out of a nimbler car. However, I didn’t get that impression. I felt the car was fairly agile at 3,100 pounds. It does feel physically big when you are around other cars though. It’s so wide you’re left wondering where the car actually ends. For wheel to wheel racing, I felt it kind of sucked. However, that is likely due to me not having seat time in it. Another thing that was annoying was the shifter. I will always say this, the T56 trans shifts like complete dog shit. There are some aftermarket shifters that make it feel better, but it’s like putting syrup on burnt pancakes. It’s still ass. The C5 is also held together by so many rivnuts. So much of it is fiberglass and bonded to the chassis. There aren’t a lot of places to weld on nuts like in normal cars. Rivnuts dislike being over-torqued. It causes them to fail, especially if they aren’t installed correctly. Another problem with rivnuts is that they pull through composites such as fiberglass. The biggest problem I had with the C5 is completely subjective. I just didn’t think I could make it look cool. C5s just have that “I’m retired and I know it” looks to them. Even full fledged race cars are just okay, except for the C5R. 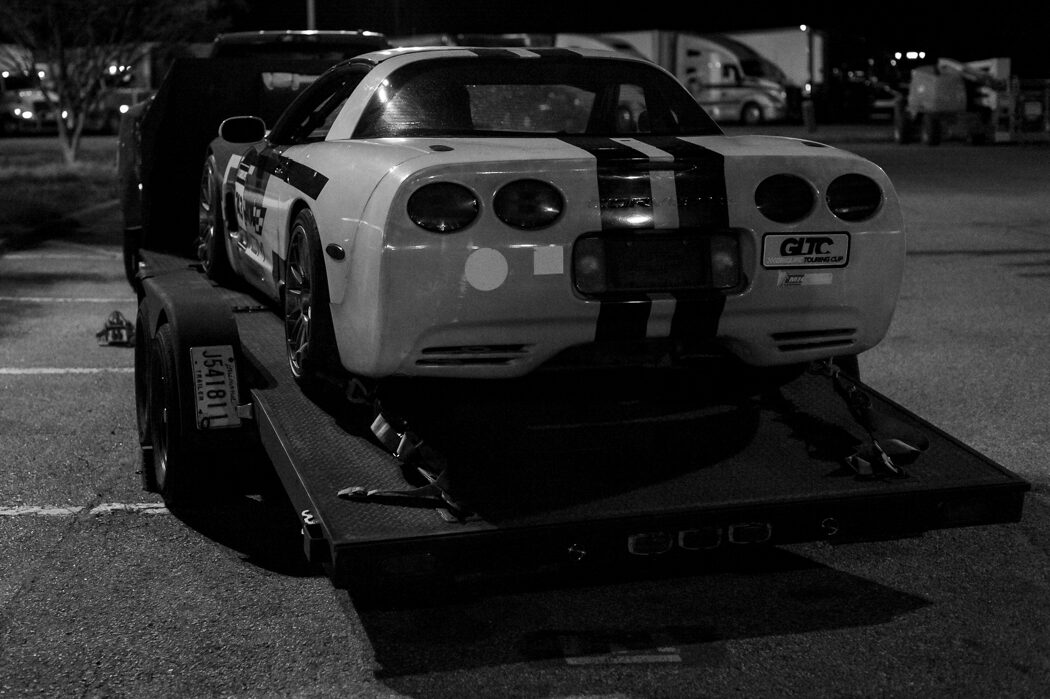 Bonnie on the new owner’s trailer

It’s not all bad though, the C5 delivers superb handling. It also delivers power from the LS in a progressive manner. I still loved the TRF roll cage that was in it. This section will be short. I have very few positive things to say about Bonnie. I just didn’t care for the car as much as I thought I would. Now that it is gone, I don’t miss it. Maybe because of the negative taste that shop left in my mouth? That can’t be it. I’ve had similar shitty experiences with Sheri (my S2000) and I can’t imagine not having it. Well, that’s partially it. However, I still wanted the car to go to a suitable home. Every car I sell has a piece of my history with it. I always want that car to serve someone else better than me. That small part of me with the car is a Peacock and I want to let it fly. 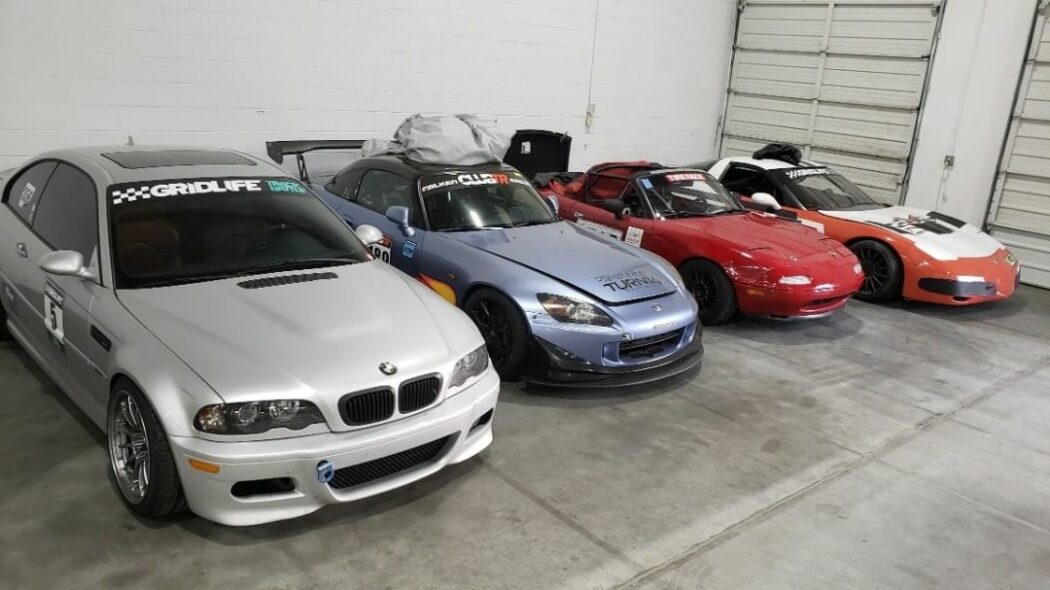 The new owner isn’t a stranger to Speed Academy. Jakob also purchased the ASS2000 a few years ago. He is already balls deep inside of the C5. The tub and the drivetrain are apart. They have removed the heads to diagnose why cylinder three had no compression. Jakob also found that the shock mount was bent, clutch damaged, and a plethora of other secrets. We talk pretty often and I’m just amazed at how much work the car needed that was unknown to me. I ‌commend Jakob for what he is doing. It’s a full ground-up rebuild. Which is what the car deserves. His plan is to compete in GLTC with it in a couple of years. 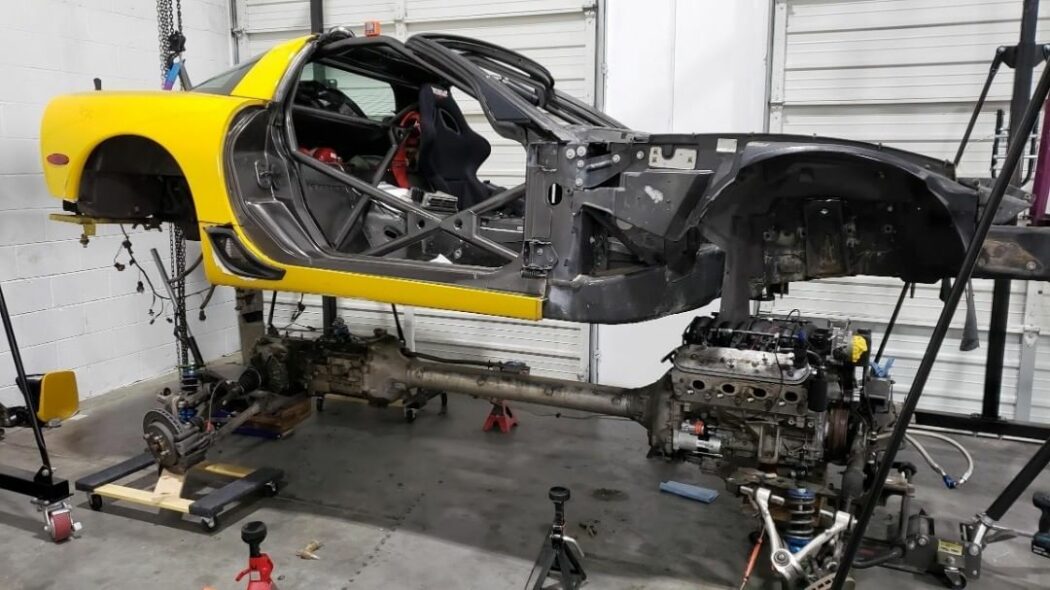 The C5 tub is separated from the drivetrain.

With Jakob making some solid progress on the C5. I guess this is the perfect time to introduce you to the Porsche Cayman I picked up. Her name is Cavalier, you’ll get to learn why in the intro article. 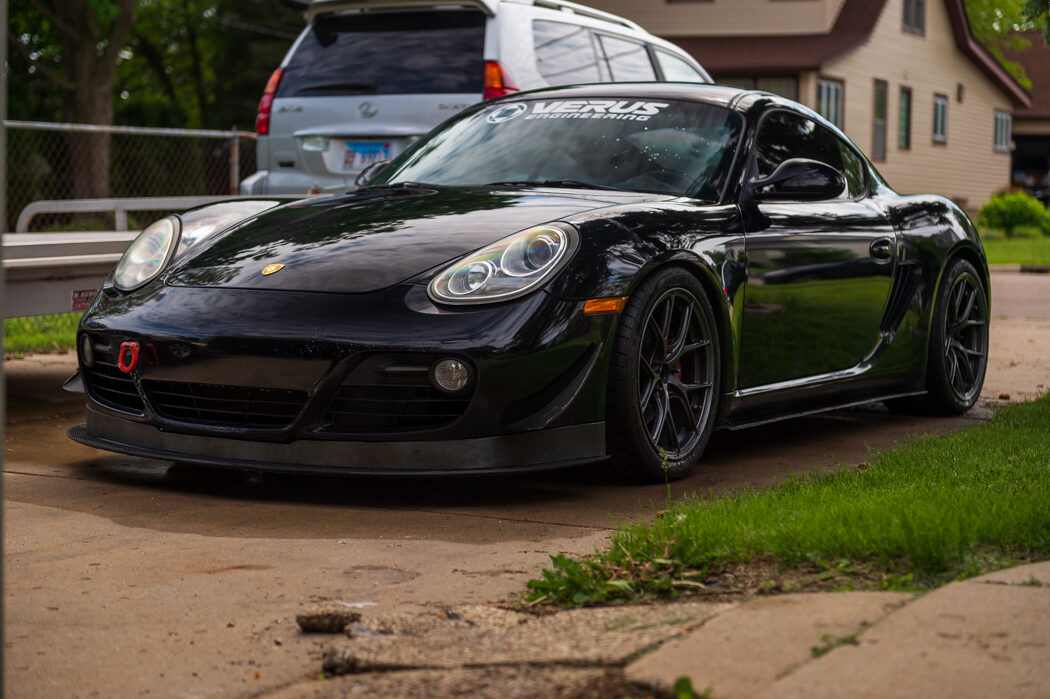