The tire industry has been telling us for years that in temperatures below 7-degrees Celsius (or 45-degrees Fahrenheit), a winter tire is going to start to generate more grip than an all-season tire. Obviously on a snow-covered surface a winter tire is going to outperformance an all-season tire by virtue of the far greater number of grooves, sipes and bitting edges its tread pattern has, but a winter tire’s rubber compound is also much softer and stays soft even when temperatures dip well below freezing and this should, in theory at least, allow it to generate more grip on a cold surface. 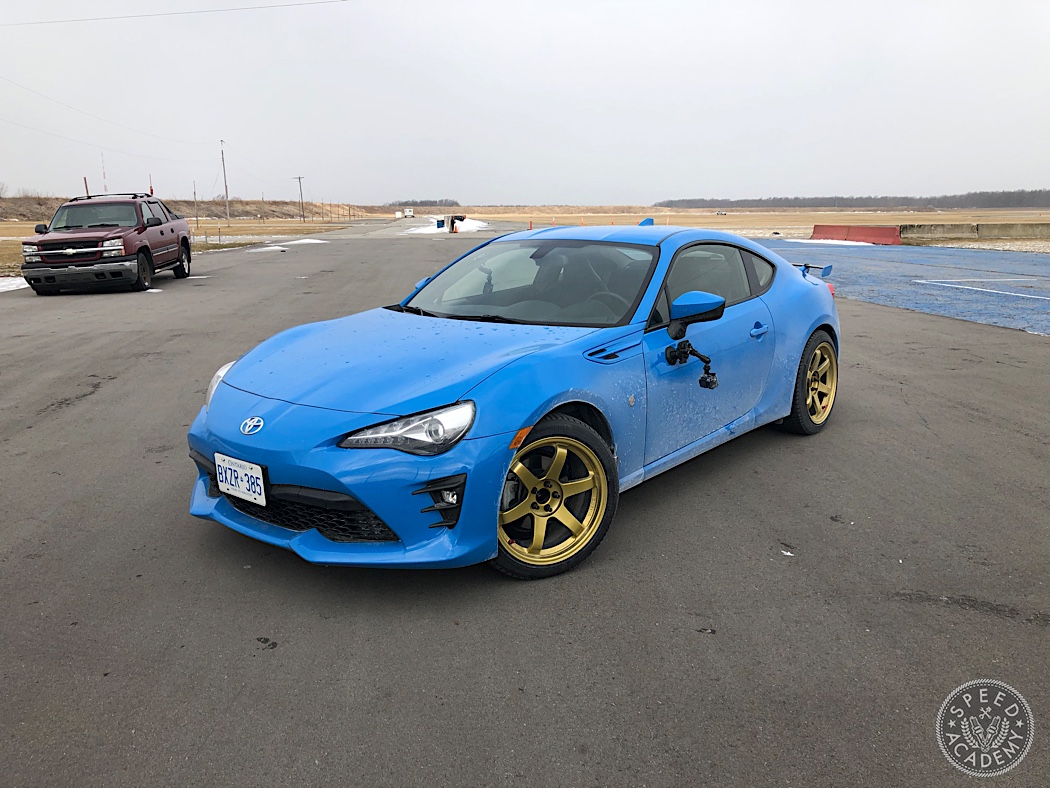 We decided to test a top quality winter tire versus a high-performance all-season tire at our local race track, Toronto Motorsports Park, to find out for ourselves just how much of a grip difference there is in the sub-zero temperates we live with for about 3 months of the year here in southern Ontario, Canada. 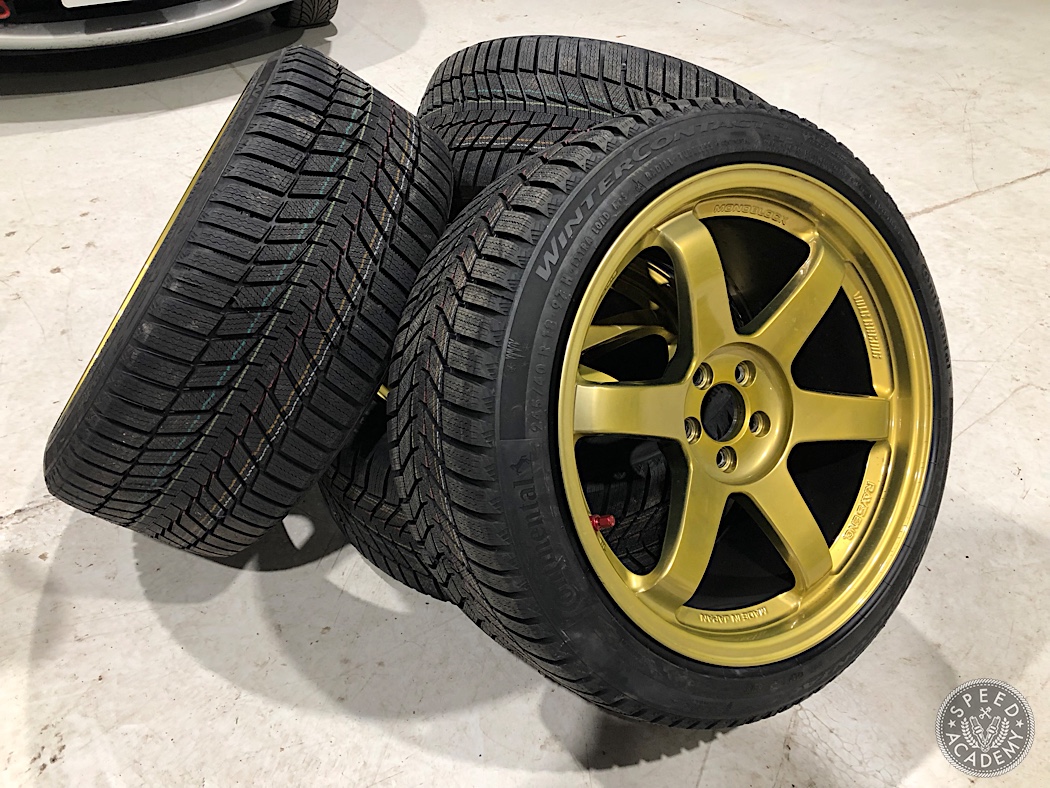 For our test tires, we used a brand new set of Continental Tire WinterContact SI along with a brand new set of Continental Tire ExtremeContact DWS06, both being the latest and greatest offerings in their respective categories from this highly respected tire manufacturer.  Both tires are packed full of Continental’s latest technology, including their PolarPlus technology which includes additional traction grooves in the voids between the tread blocks as well as a special additive to the compound that gives it extra grip on cold, slippery roads. 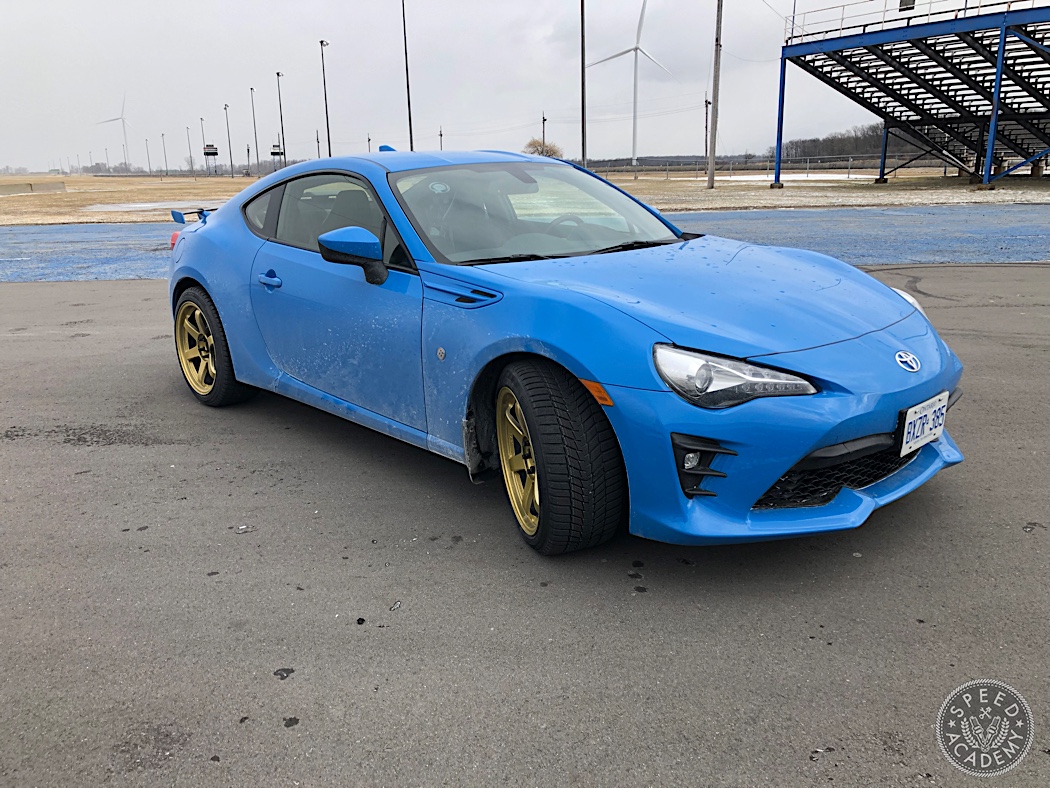 For a test vehicle, we borrowed a 2019 Toyota 86 GT from Toyota Canada. Rather than using the rather narrow OE wheels and tires, we stepped up to a more typical enthusiast-driver setup using 18×9.5” wheels wrapped in 245/40R18 size tires. This would give us a lot more rubber on the road in dry conditions, which is exactly what we had at the track during testing.

Had the track surface been covered in snow or slush or water, I think it’s safe to say our results would have been very different. Still, given the widely reported “below 7C winter tires work best” information we’ve been fed in recent years, we still expected the winter tires to generate more grip and therefore yield faster lap times in the -6C (-15C with the wind chill factor) conditions we had during testing.

However, as you’ll see in the video below, that is not how things panned out. Much to our surprise, the ExtremeContact DWS06 all-season tires generated significantly more grip in the corners and a lap time 3-seconds faster than the winter tires (1:31.0 vs 1:34.0), and the all-season tires also out-stopped the winter tires in a 100-to-0 kph (60-to-0 mph) emergency stopping distance test by an average of 11-feet.

How do we explain these results? Well, we’re certainly not tire engineers, but there’s no question the ExtremeContact DWS06 tire and compound generated superior grip and traction in these cold and dry conditions. Part of the advantage can likely be explained by the fact that the ExtremeContact DWS06 has a much stiffer sidewall and larger, more stable tread blocks across its contact patch, and in dry conditions this meant far less tread squirm and far sharper turn-in response. Given that Continental also takes wet and winter performance very seriously, they’ve clearly engineered a lot of cold weather capabilities into the DWS06 compound, since it was gripper even in the first braking zone and first corner, before any heat had been generated in the tire.

Does this mean your average all-season tire would have delivered similar results when compared to a winter tire? We think not, and as I stated off the top, we’re also confident the results would have been very different had the track surface been at least partially snow covered. In fact, we hope to re-do this test in the near future when the track is snow covered, so stay tuned for that.

But in the meantime, we have at least shown that a top quality all-season tire like the Continental ExtremeContact DWS06 can generate surprisingly high dry grip levels than a winter tire, even in sub-zero temperatures. Take that for what it’s worth, because if you live in a climate like ours where the roads are often snow and slush covered, a proper winter tire like the WinterContact SI is still going to be your best defence against an unplanned trip off-road.

We used to do “Winter Auto-X” on a rented taxiway, the events were sometimes snow, sometimes ice, and sometimes bare pavement. Always at freezing temps. Some road-spec summer tires (like Conti DW) would have gone even quicker from my experience!

So this is interesting. I have winter tires on my car, a 2016 WRX, and I absolutely hate them for the daily driving I do during the winter months in northern New Jersey (November – April). Granted, I bought the cheapest winter tires off tire rack that I could. I have been contemplating actually switching to all seasons for a winter tire. I got my girlfriend the DWS06 on her Elantra, which is overkill but it works, and I really like them myself. Most of the time, roads are nice and plowed, dry, or some bits of wet. The only… Read more »