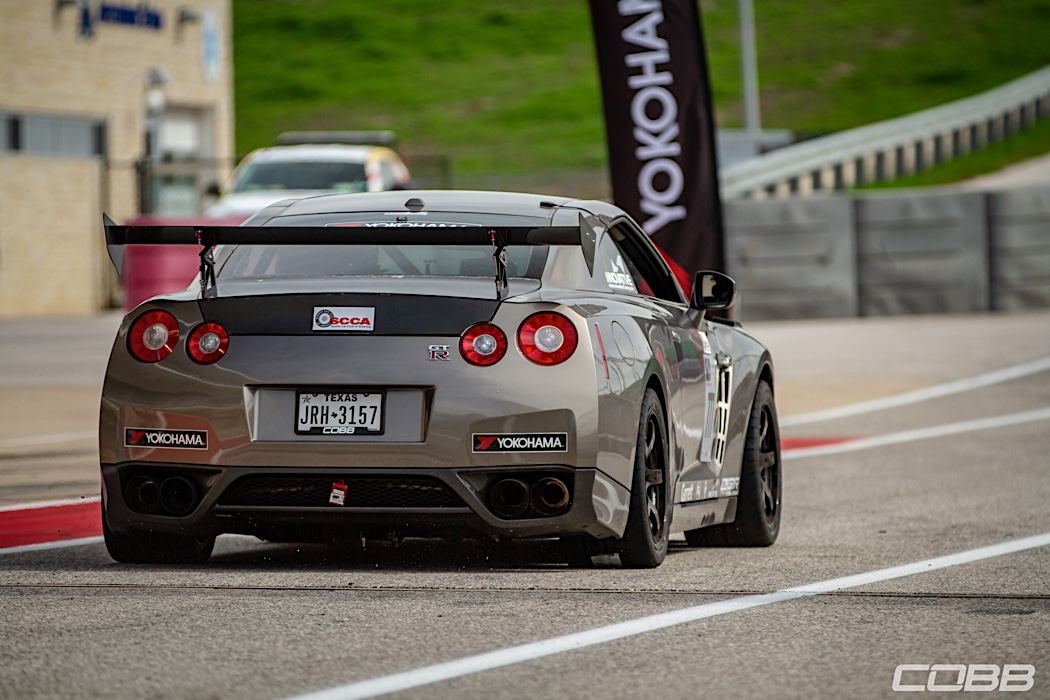 In the end, I didn’t run full power in any gear. The current control tire for SLB Limited Class has a contact patch smaller than stock rears for the R35 GTR and all 4 tires are load rated far below stock level. My street car isn’t a lightweight, so at 4000+ lbs, on small tires, 1170 wheel HP was simply too dangerous a combination for me personally. The tires were overheating from all the load, causing uncontrolled pressure increase over a single lap which makes your contact patch disappear turn by turn. I compromised acceleration for some measure of safety, but even with the boost at a maximum of 85% of potential, I had the fastest trap speed of the event at 176 miles per hour, and putting less heat into the tires during acceleration events allowed me to get more out of the tires in the corners. 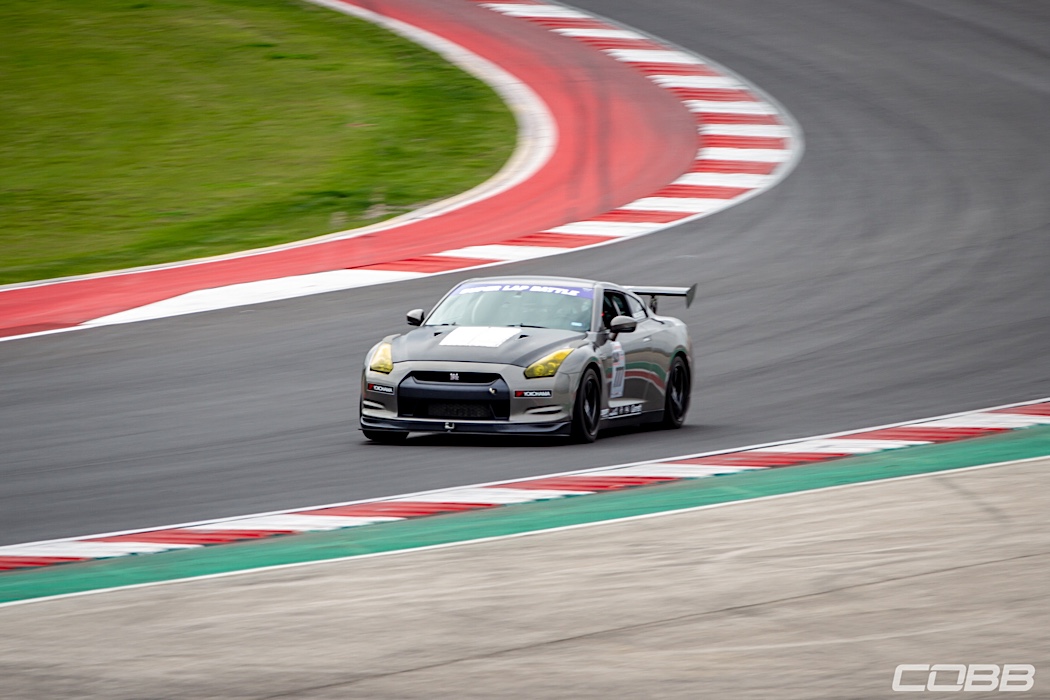 Next lets consider situations where grip is shared between forward acceleration and cornering. On corner exit, only some of your total grip is available to put power to the ground, while the rest is managing the lateral load. Decreasing boost under high lateral G loads is possible with some engine management systems, and I’ve used that approach on my highlighter yellow Time Attack Subaru Impreza known as Voltron with success. Cornering is also an opportunity to lean on a sophisticated traction control system which can incorporate lateral G into its calculations, but that’s a story for another day. 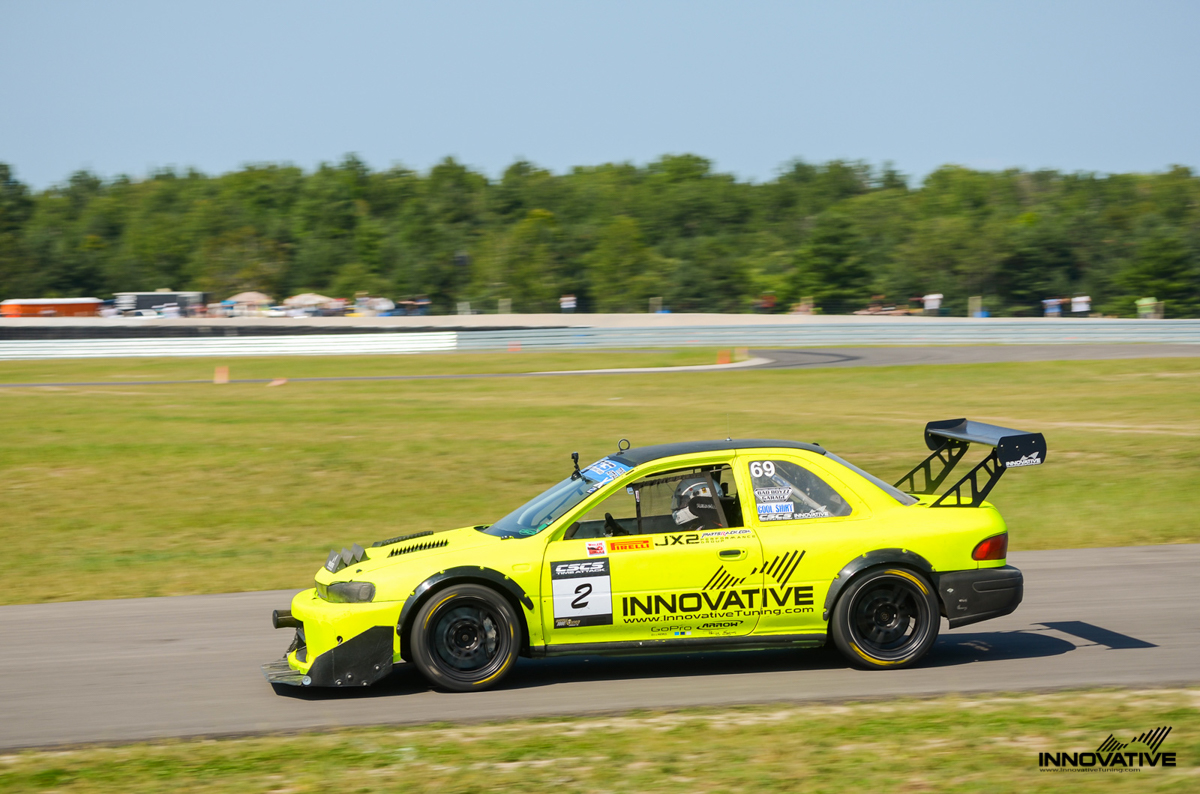 But how about a more commonly available option to control power delivery while cornering? Make the driver tell the ECU what they want! In days past, the accelerator pedal was tied to throttle linkage via a cable, but most modern vehicles use a drive by wire system. The pedal has sensors which monitor how far the pedal has been pressed. The ECU decides how much to open the throttle body AND how much boost to run, based on a series of calibrated tables and logic. 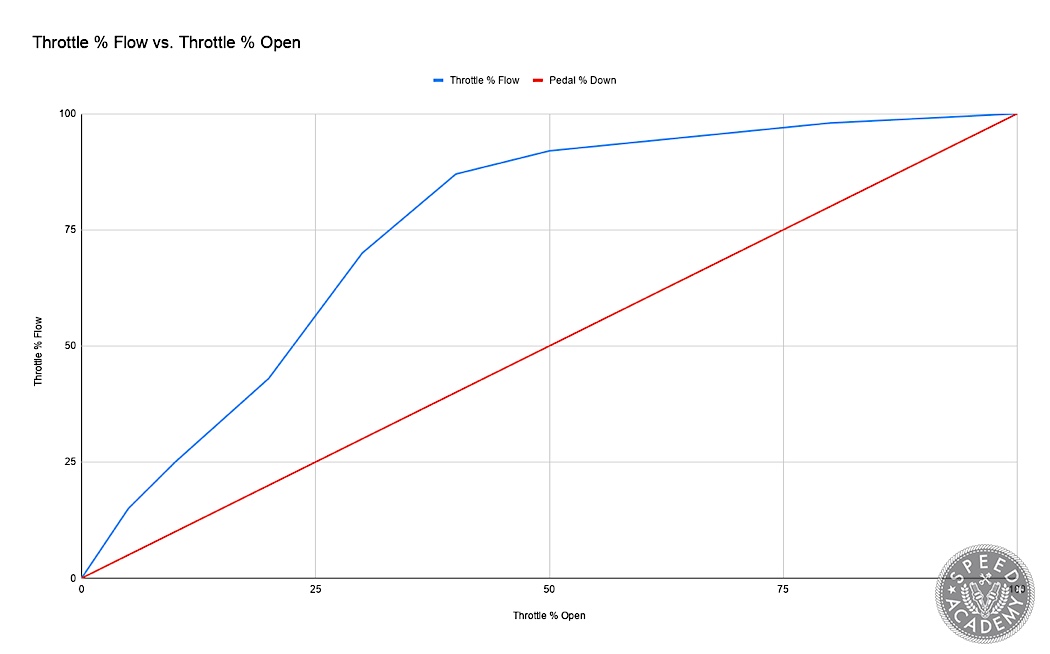 With a 1:1 relationship between pedal position and throttle position, you end up with flow behavior similar to what’s shown above. Initial motion from a closed position causes a large increase in flow, sometimes there’s a bit of a lull in the relationship after that, then typically flow reaches a point of diminishing returns early in the range of throttle motion. Oftentimes from 40% throttle opening to 100% there’s little difference in actual flow. Like most things related to engine tuning, your mileage may vary based on your vehicle configuration. 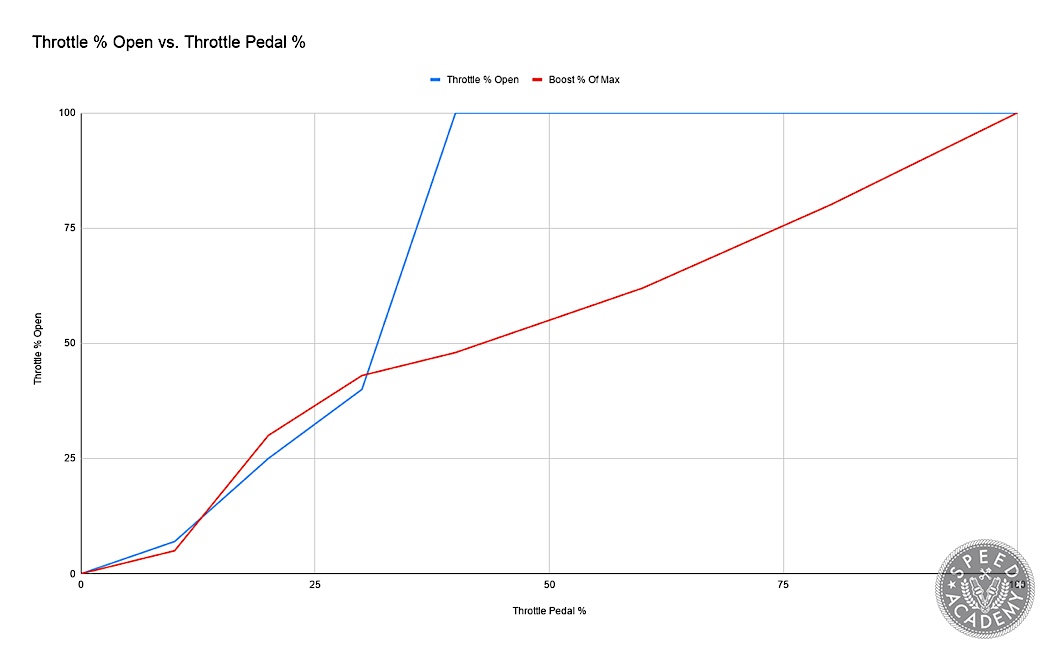 On many street vehicles, drive by wire control is tuned to make engines appear more peppy than they really are by providing most of the available engine output at smaller accelerator pedal inputs. This makes the vehicle feel powerful as it streaks away when you’ve only pushed the accelerator half way down, but there may be little left in reserve. To average Joe who never floors his car, he’s none the wiser, but when you do floor it and realize there was no additional power left, it’s kinda like pulling the curtain back on the Wizard of Oz. Part of this comes from the nature of throttle body flow illustrated above. Part comes from boost control settings exacerbating the situation by requesting perhaps 80% of max boost at only 50% pedal input, leaving only 20% of the boost range left for 50-100% pedal input. 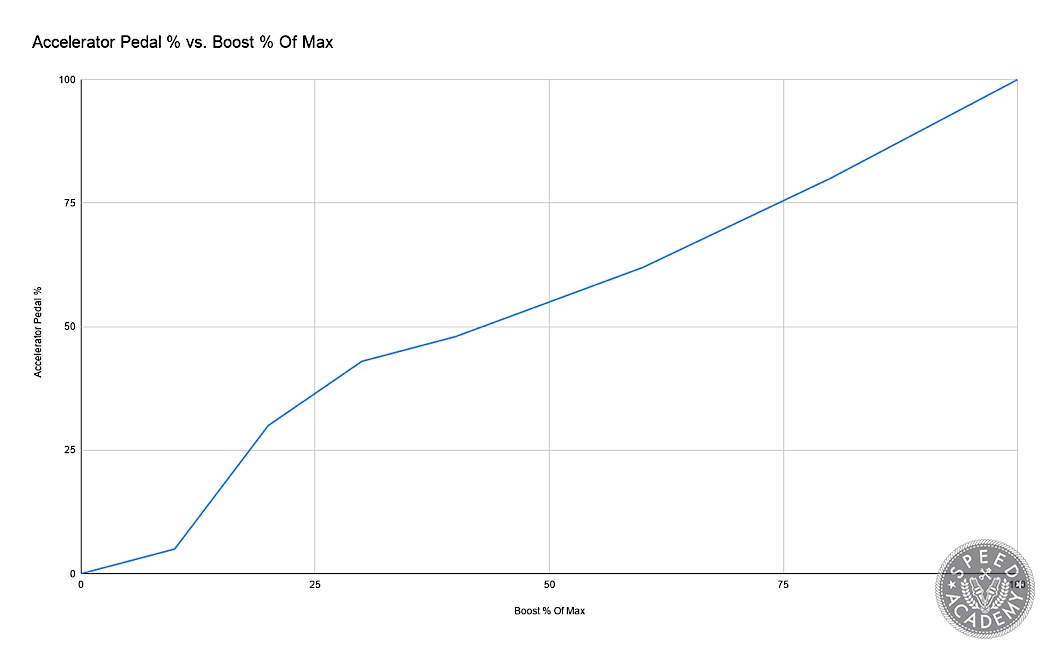 If you so desire, you can calibrate to offset this throttle flow behavior by keeping the throttle mostly shut until very high accelerator pedal inputs. That has some downsides in terms of engine volumetric efficiency and prediction of air mass on speed density systems, though. Since turbos have a far greater impact on engine airflow than whether the throttle body is 40% vs. 70% open, I like to get the throttle plate all the way open any time there’s significant airflow, then use boost to modulate engine output. I tune the accelerator pedal to behave as I feel the volume knob on a stereo should. I want nothing when I’m off the pedal, around half the power when I’m half way down, all the jam when I floor it, with approximately a 1:1 ratio of pedal input to engine output. Achieving this involves using very non linear relationships and requires testing and incremental refinement to get the desired outcome. Above is what pedal position vs. boost level might look like once tuned.

Lastly, when track conditions change due to sand/dirt on track, rain, cold weather, or perhaps rules require using a tire with less grip, being ready with a means of altering engine output can mean the difference between having a drivable car you can win the race with. You never know when slow will suddenly become fast, so have those reduces power maps handy. 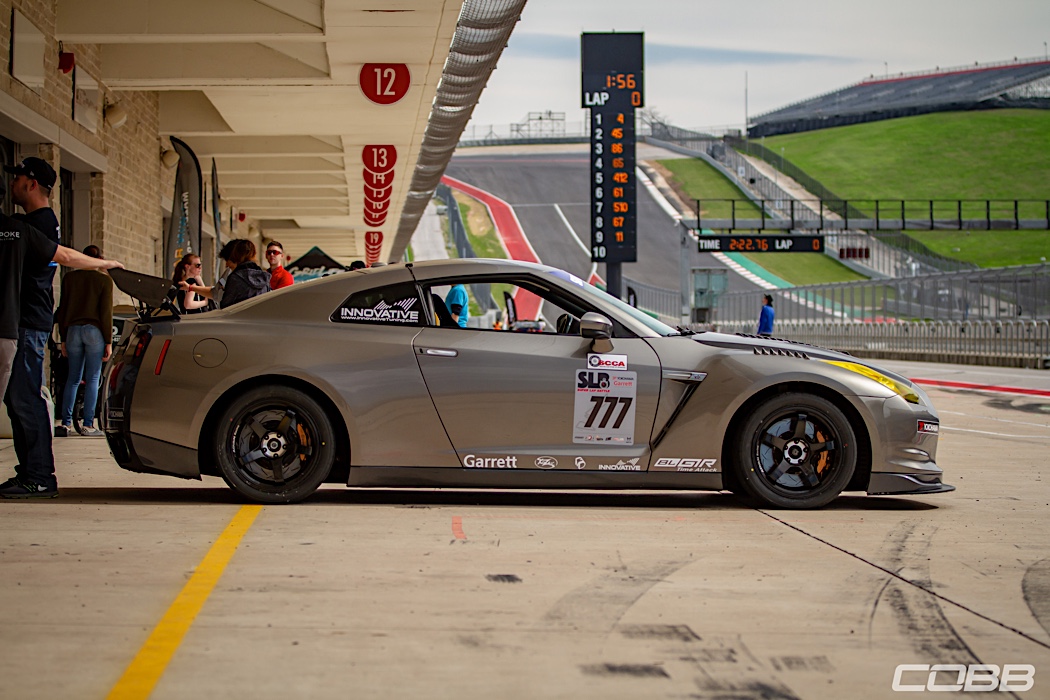 To sum up, I love seeing big numbers on dyno charts as much as the next enthusiast, and I’ve burned my share of rubber. When it comes time to lay down a flyer, though, just the right amount of power, at just the right time, gets the job done.

Mike McGinnis from Innovative Tuning is one of the top ECU calibrators in North America and is now Senior R&D Calibrator at Cobb Tuning. He has set numerous Time Attack lap records with Voltron, his world-famous Subaru Impreza racecar, and he also remotely tuned the Abandoned STI for us using a Cobb AccessPORT, as you can see in the video below.

It’s been a few long months since we had our first wheel to wheel race at Circuit of The Americas with Gridlife. Bonnie enjoyed going to Gapplebees, but she wasn’t…