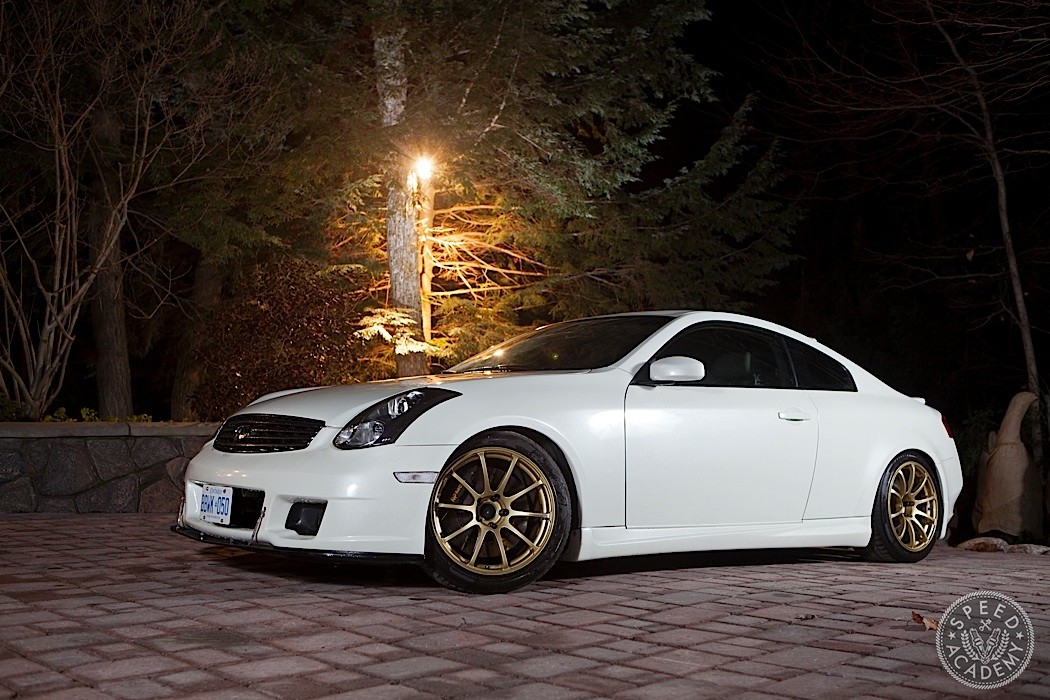 With Nissan 350Zs and Infiniti G35s being surprisingly affordable these days, they’re one of the best options on the used car market for a project car starting point. I still miss my ’06 G35 coupe, since it provided a superb mix of luxury, style and performance. The Z is really the better choice for a pure track day car, but for a road car I highly recommend the G coupe since it has semi useable backseats that fold down, making it a surprisingly practical daily driver. Both have tons of aftermarket support and have been around long enough that there’s a strong knowledge base about what mods work best. 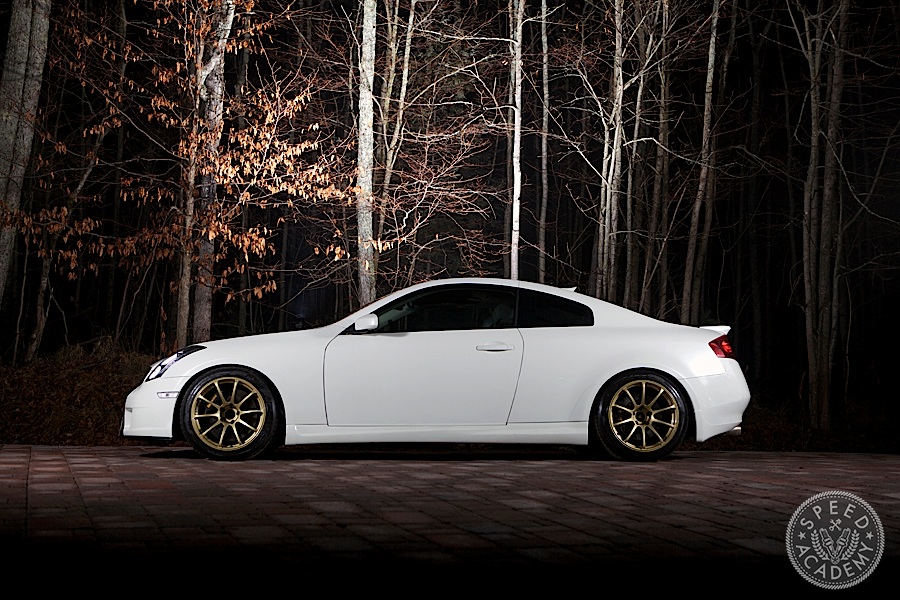 Back when I started modifying my G35, the RevUp VQ35DE was still a relatively new engine to the market, but there was strong support from some of the bigger Nissan tuners including Stillen and MotorDyne Engineering. Of course I was tempted to go with a turbocharger or supercharger system for a big jump in power, but this was my daily driver and I really wanted to keep it simple while adding some much needed mid-range punch. The G was a bit of a porker at around 3500 lbs, but with an extra 40 or 50 horsepower I was confident it’d have the kind of performance I was looking for. 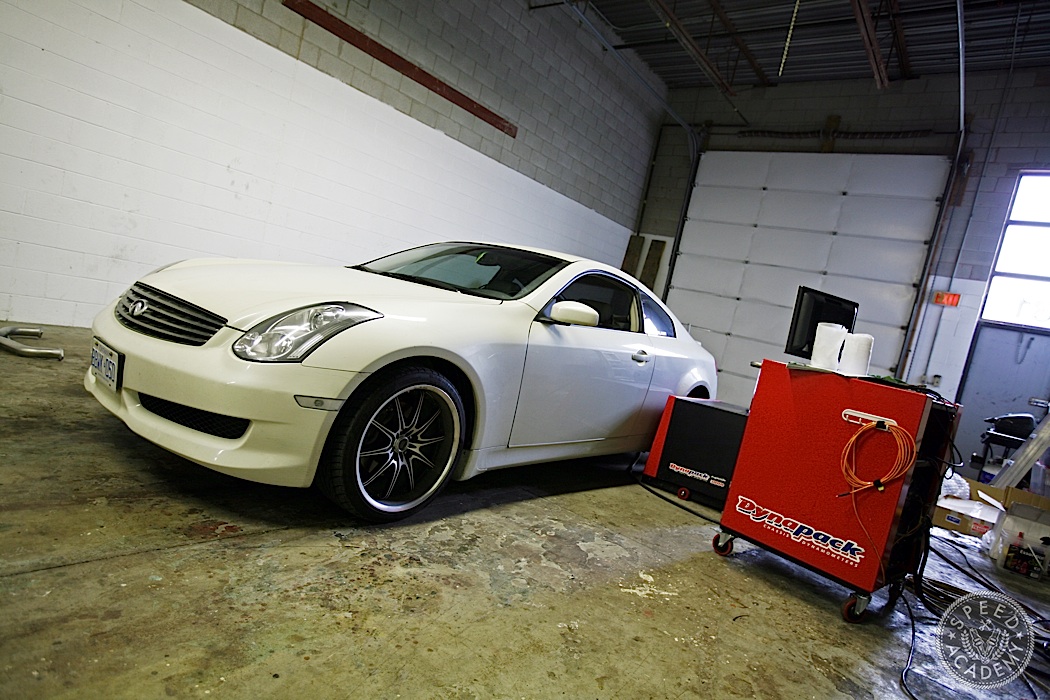 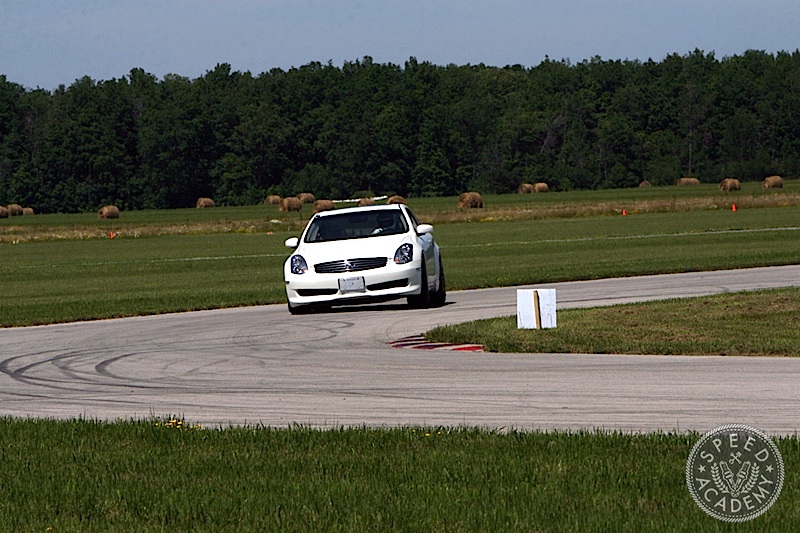 Before bolting up a series of intake and exhaust upgrades, I first baselined the G on OnPoint Dyno‘s Dynapack hub dynamometer and took it to Toronto Motorsports Park to baseline its on-track performance as well. This way I had a true starting point from which to measure any gains achieved from the bolt-on power adders. Science! It’s not that hard, kids! 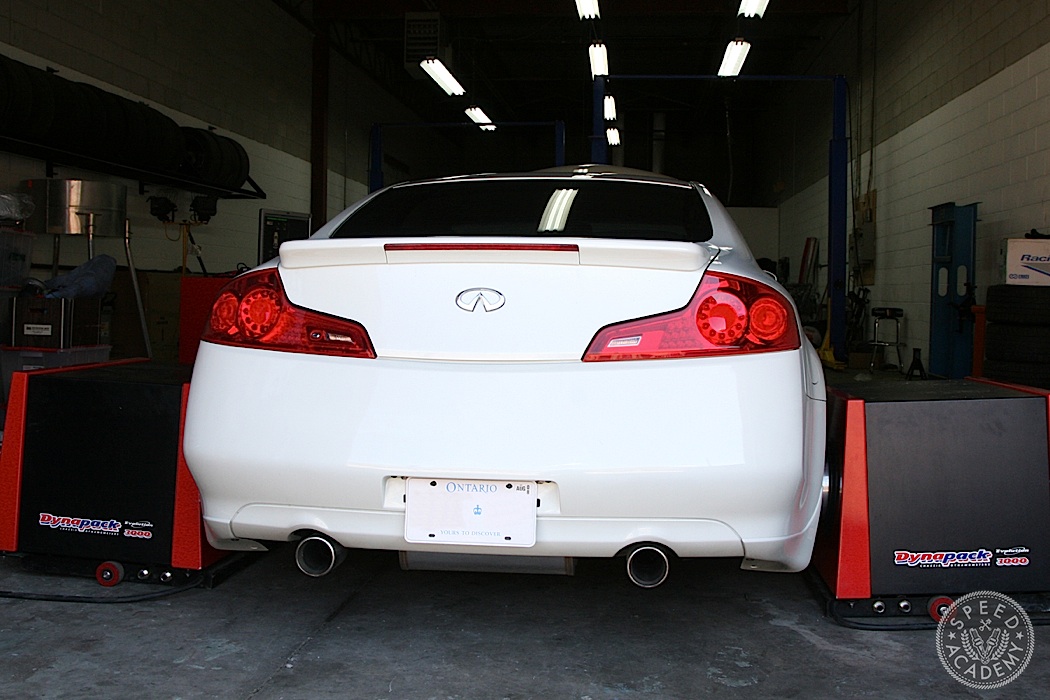 On the dyno the G pumped out an underwhelming 221.8 whp and 215.2 wtq, and turned an equally uninspiring lap time of 1:29.198-seconds. This put it about on par with a stock Honda Civic Si with respect to lap time, which was pretty disappointing but the body roll wasn’t helping any, nor was the horrendous brake fade, and the top end power delivery just wasn’t where it needed to be for track day action. The suspension and brake issues I was able to address easily enough (and will recount here in separate stories), and as you’re about to see squeezing some extra naturally-aspirated jam out of the VQ35DE is certainly worthwhile. 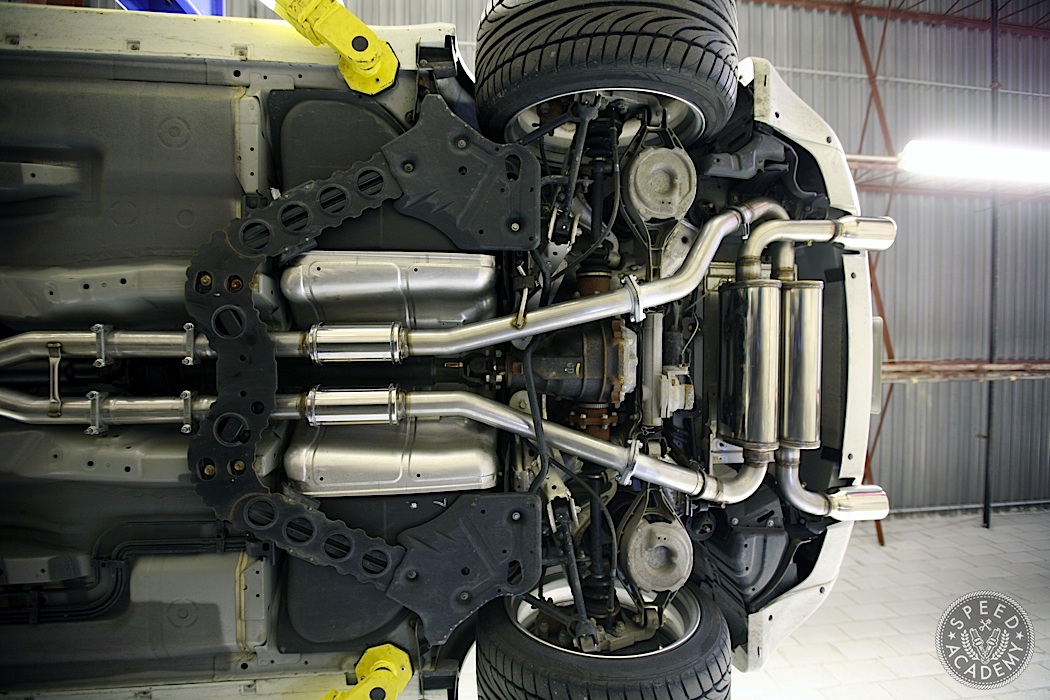 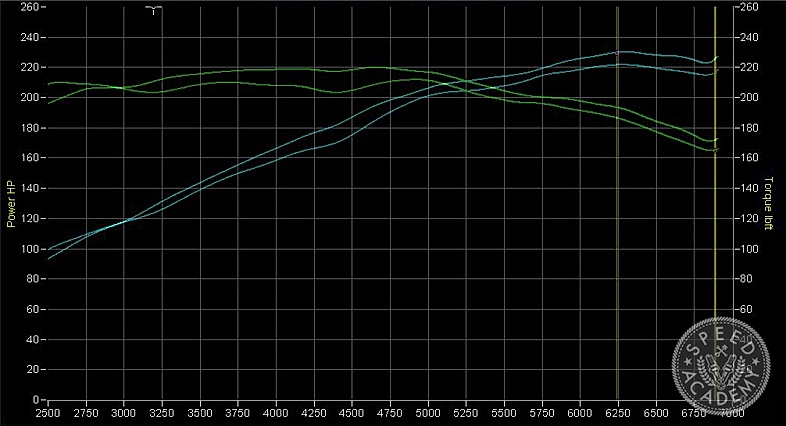 I decided to start out with Stillen’s true dual cat-back exhaust system and their Hi-Flow intake system. The exhaust system is made from 304 stainless steel, features polished 304SS dual wall tips that keeps them cool so they won’t melt the bumper cover, and use a clever slip-fit design that makes it very easy to adjust its fit and get the tips lined up perfectly in the rear bumper openings. Plus the exhaust gave the G some extra attitude, thanks to a mature but more aggressive exhaust note. It also delivered a solid bump in power, increasing peak wheel horsepower over the 230 mark and bumping torque up across the board too. 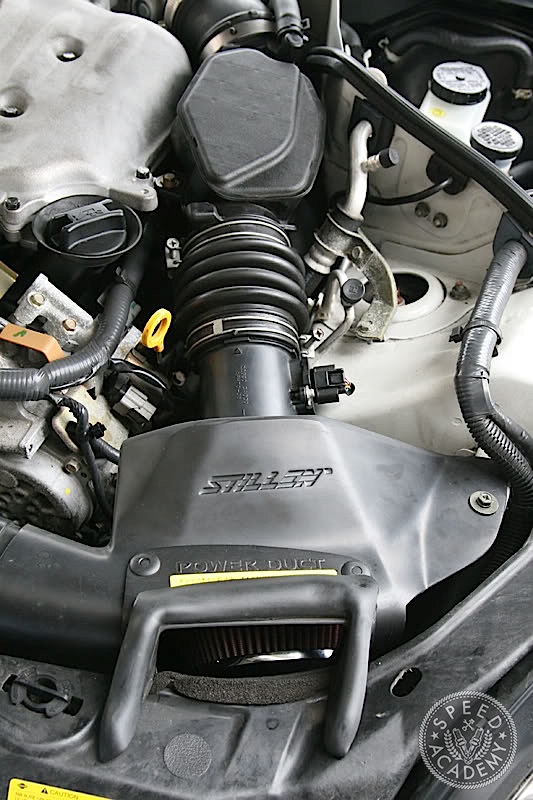 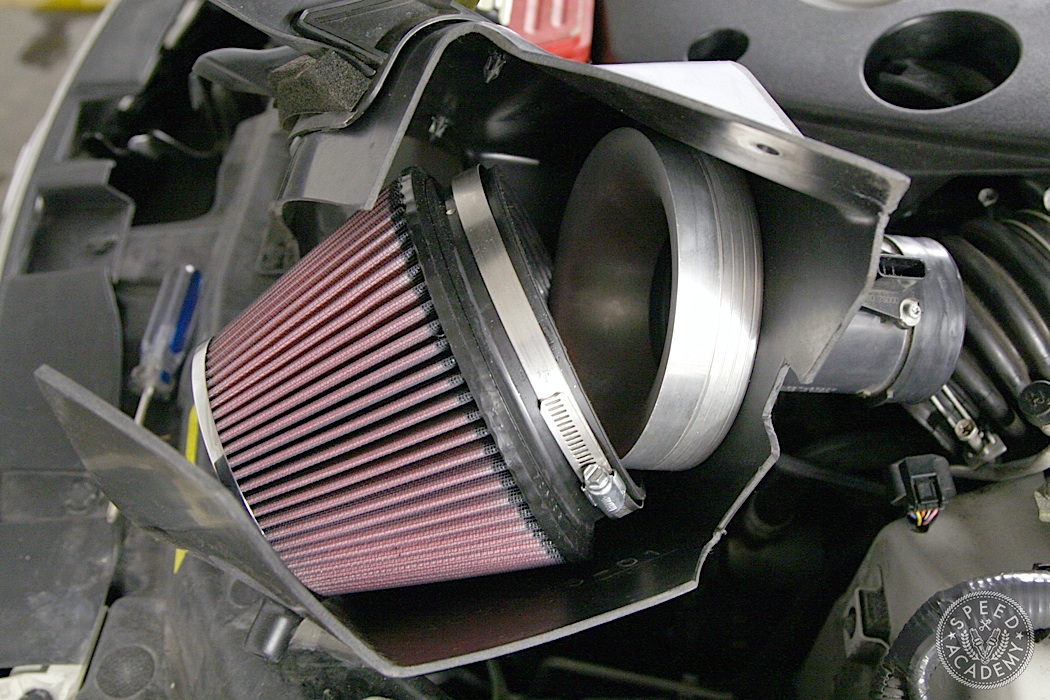 The intake was child’s play to install, with everything being easily accessed from the engine bay (no need to remove the bumper cover or anything like that). This kit includes a large K&N cone filter and an aluminum venturi ring that speeds and smooths the intake charge. You can also add an option Z-tube to this kit, which replaces the OE tube between the filter and throttle body, but I didn’t bother since the Internet told me it wouldn’t likely result in any meaningful power gains. I like how the polyurethane filter housing shields it from engine heat and how it integrates perfectly with the OE power duct that draws fresh air in from outside the engine bay. It’s also worth noting that this is a CARB legal intake, so even you Cali dudes can rock it on your street car. 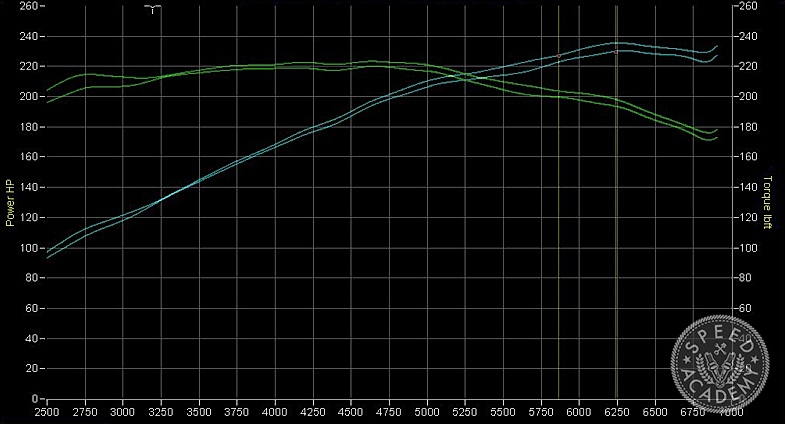 Power gains were respectable for such an affordable and simple upgrade, with peak horsepower improving by 5.2-whp and torque up by 3.4-wtq. Plus power is up across the entire rev range, so there’s absolutely no downside to this modification.

Check engine light come on when you swapped the header?

Nope, never had a single check engine light issue with any of the mods on the G35.

Did you have to tune your car at all?

Yes, the car was tuned.

And without tune does the mods have any +hp?

What tune did you do and is this the non-Revup engine? you mentioned using nonl-Revup plenum I have the none revup and want to find a place to do tune.

Jerzyiroc  no sir, never had any CEL issues with the headers.

JosePerez9  nope, stock tune. We always intended to do some tuning but never got around to it.

Could you send me a link where you found the catalytic converter, or does the full exhaust system off of the stillen website come with the Cat. Thanks!

Schmidtty  I got the cats separately from Stillen (they were prototype pieces at the time), but I’m sure you should be able to order the Stillen system complete with cats now.

DavidPratte one last question, i really like the noise the Godspeed Catback exhaust makes. do you know/have an opinion on it?

Schmidtty sorry, I’ve never tried or heard the Godspeed catback on a G35.

Which is the preferred? Rev up or not and what does that even mean

The 2003 – 2004 350Z & G35 Non Rev-Up version of the VQ35 engine produced 287 horsepower. The 2005-2006 350Z & G35 Rev-Up engines produced 300 horsepower. The Rev-up engine produced more horsepower by adding variable valve timing to the exhaust camshaft, revised ECU tuning, slightly different internals, and a different intake plenum. The only downside to the Rev-Up is that they are known to suffer from oil consumption issues.

How much did each mod cost? You say these are affordable,but that’s a relative term.

tamaz0125  if you follow the links in the story they’ll take you to the manufacturer pages with pricing. Cost is certainly relative, but for non eBay parts that are designed, tested and built in America, I consider these parts very good value. The Japanese equivalents tend to be a fair bit more expensive.

He was mentioning WHP which is different from HP, he said it was 220Whp which is around 280hp

He stated wheel horsepower, meaning 80 percent of bhp… that is why it is lower, because on average you lose 20 percent from the crank to the wheels.

Thanks for your marvelous posting! I genuinely enjoyed reading it.

Infinity g35 set up is difficult than Others.

If you’re an owner of late 80’s to early 90’s BMW E30, E28, and E24 models then sooner or later you’re going to experience an odometer that stops working. It’s…