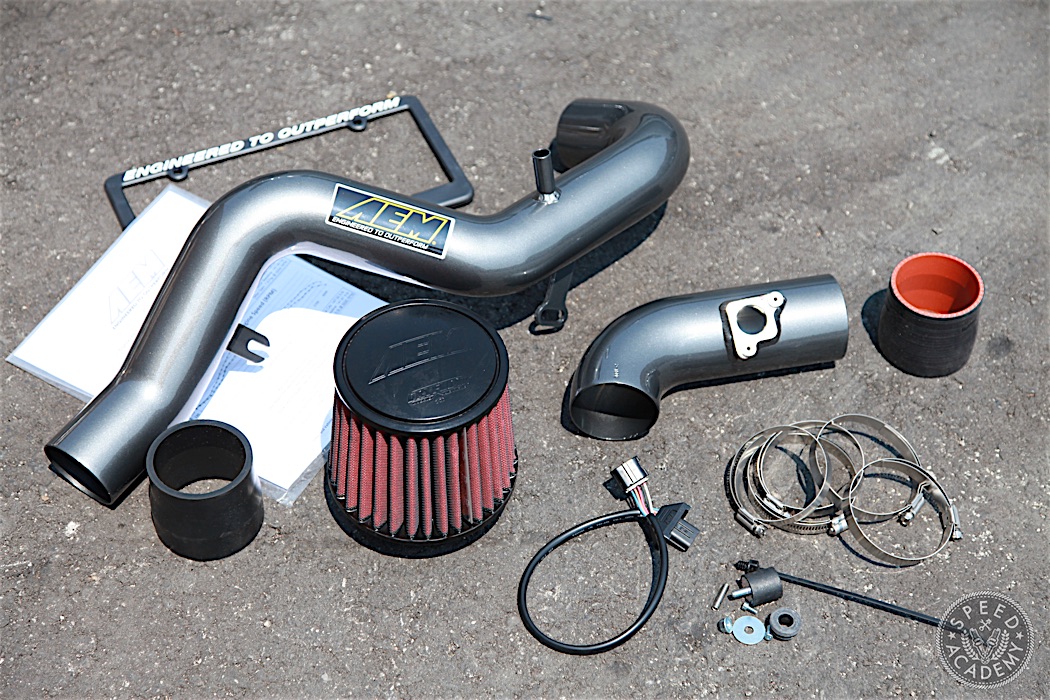 Next up we removed the OE intake system so we could install this AEM cold air intake system. This system was designed, tuned and dyno-tested specifically for the Scion tC by AEM Intakes, using their patented Dryflow synthetic washable air filter. 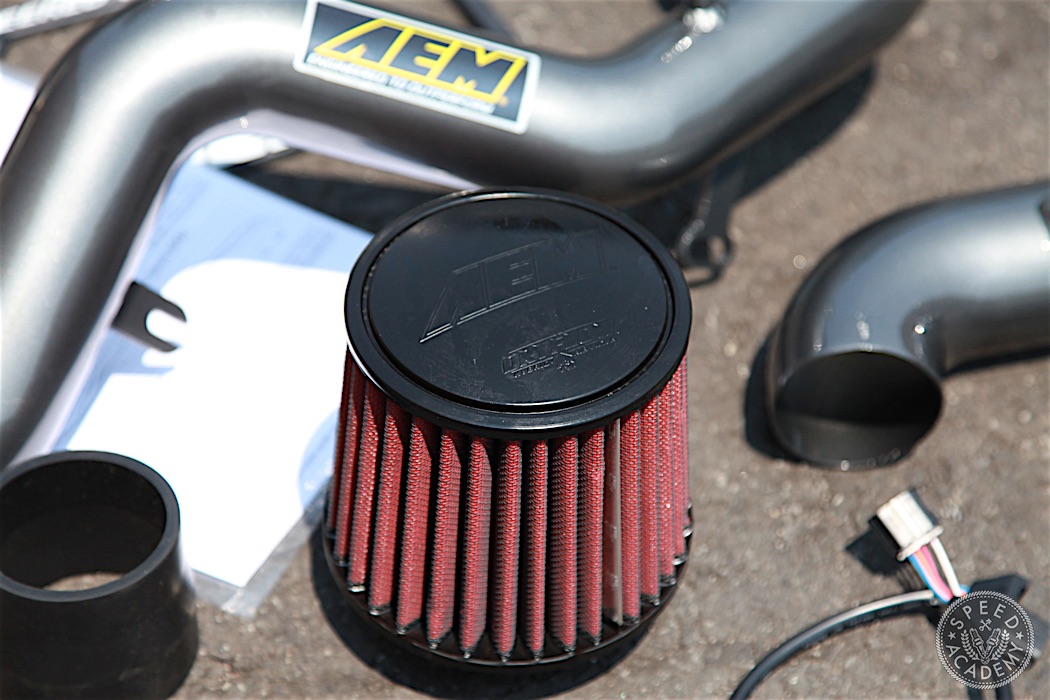 We’ve used these filters on a bunch of our road cars and race cars over the years and have been extremely impressed by their performance and durability. We’ve also washed and reused them with excellent results. 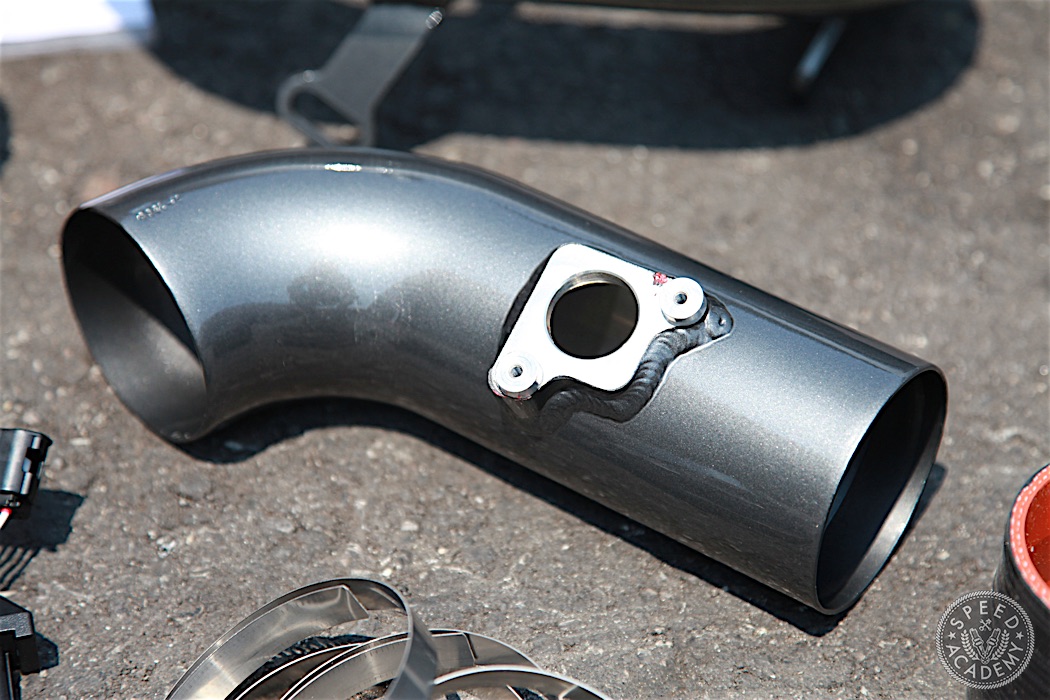 The intake tubing is constructed from mandrel-bent aluminum featuring a durable gunmetal gray powder coated finish, and as you can see it has a mounting location for the factory mass air flow sensor as well as all the required ports to route the PCV and crankcase vent hoses from valve cover to the intake for a closed loop and emissions-compliant setup. 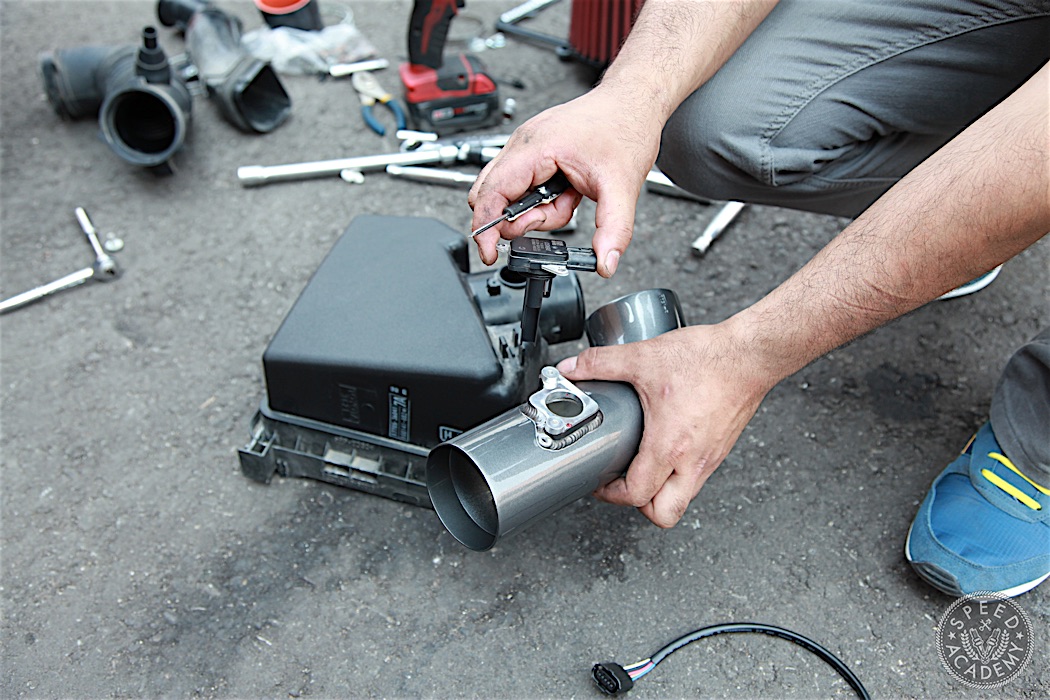 Swapping the MAF over from the factory airbox was a piece of cake. 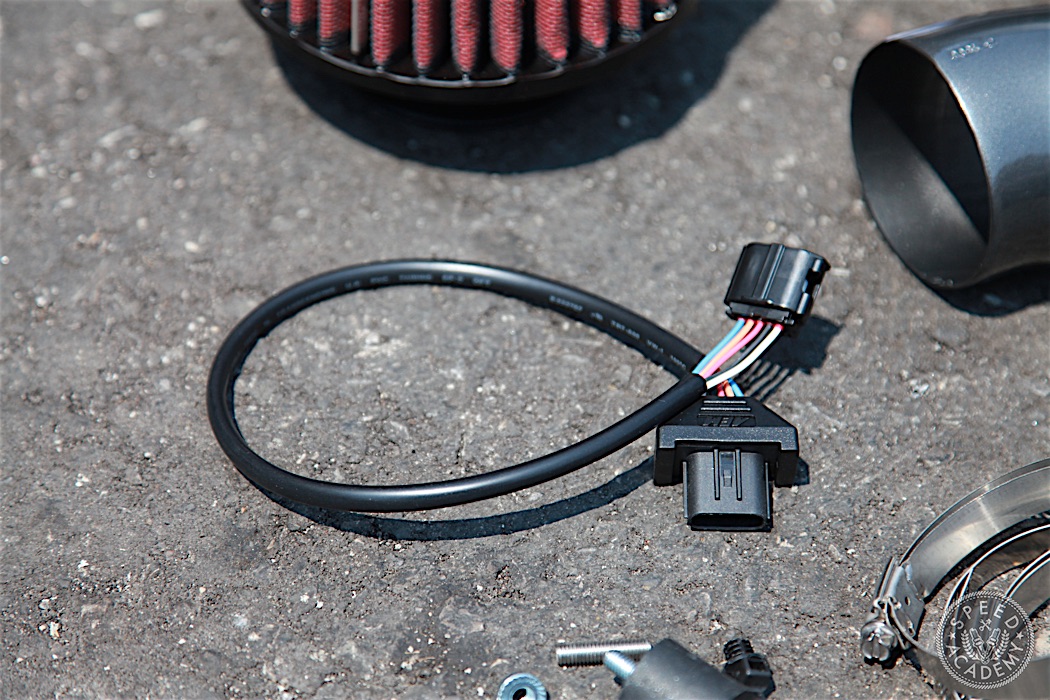 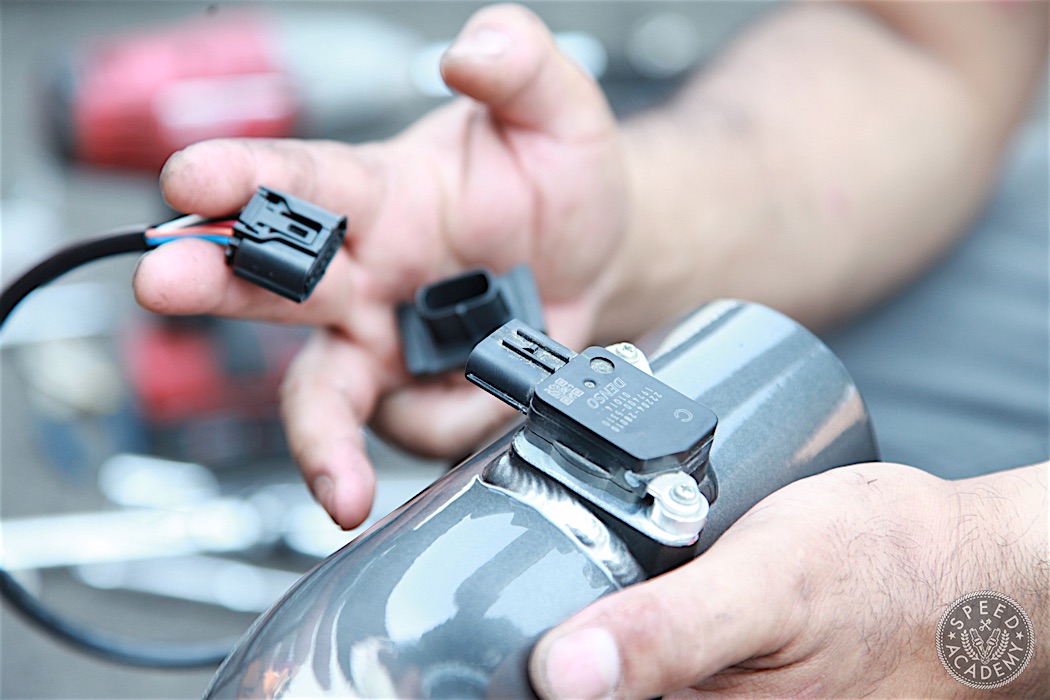 AEM includes this extension harness for the MAF, since its new location on the intake tube if farther from the OE harness than with the factory airbox. As usual, AEM does things right and makes the installation as easy as possible for their customers. 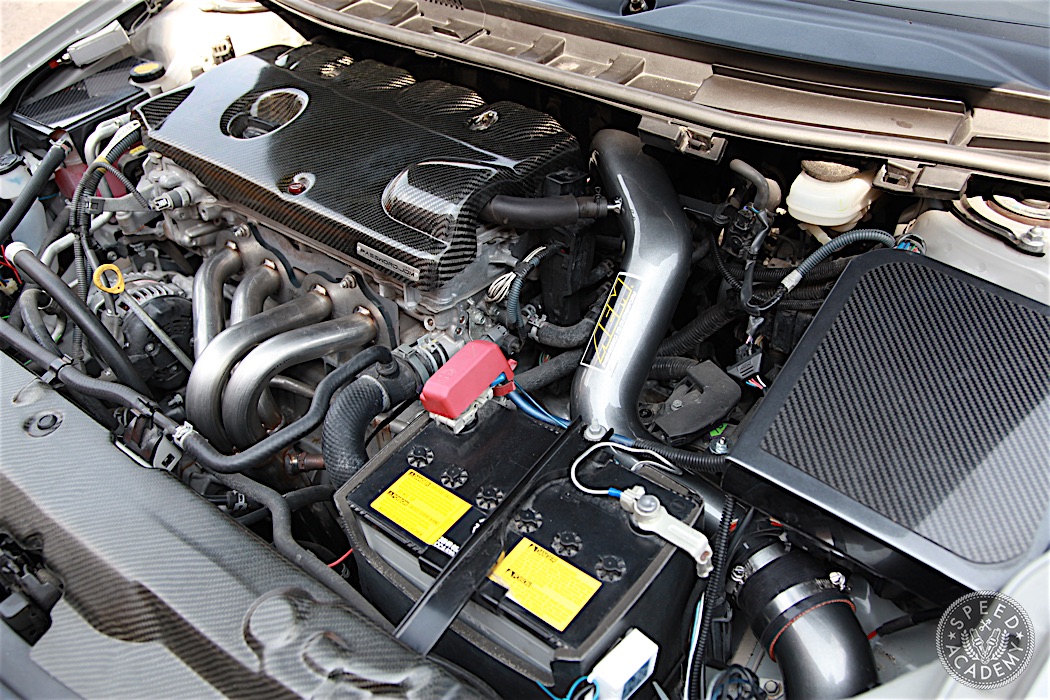 The air filter is located down in the void where the original air box used to live, which is designed to reduce intake air temperature and increase horsepower. With the installation complete, the tC’s engine bay was looking good and was ready for dyno testing. 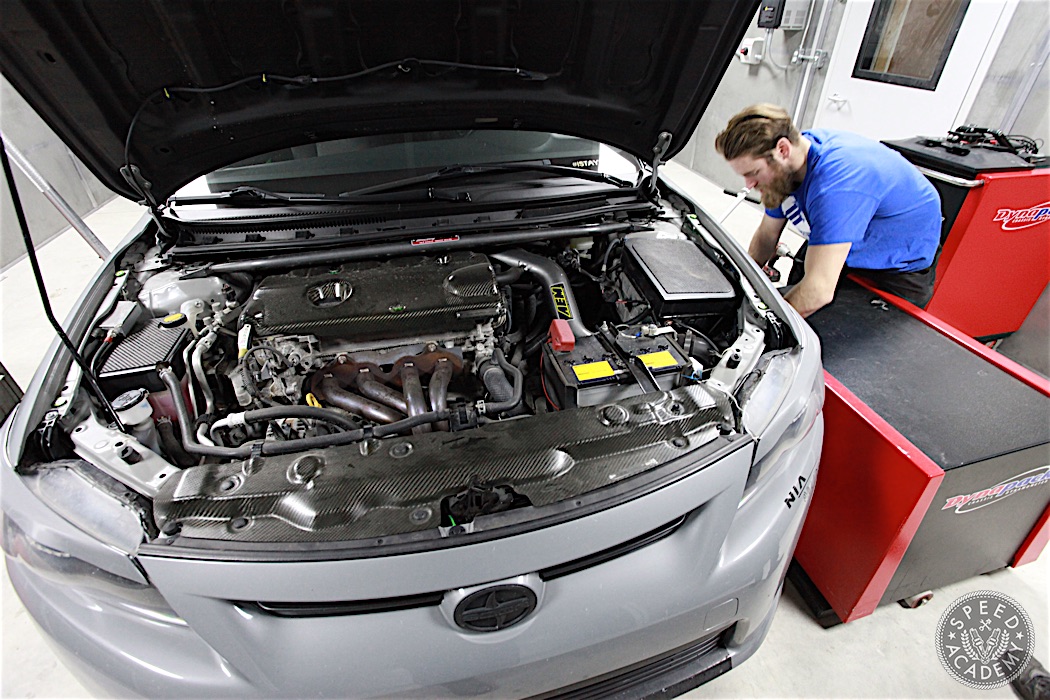 One problem, though. I had to leave if I was going to make it back in time to pick up my son from daycare. This meant we’d have to reschedule the dyno testing for another day. Not a big deal since results are so repeatable and consistent on OnPoint’s Dynapack dyno, but with how busy we’ve been here at Speed Academy, it was until last week (um, about 6-7 months later) that we finally got together with Sasha to complete the test. Time flies when you’re having fun? Sorry Dezod and AEM. My bad. 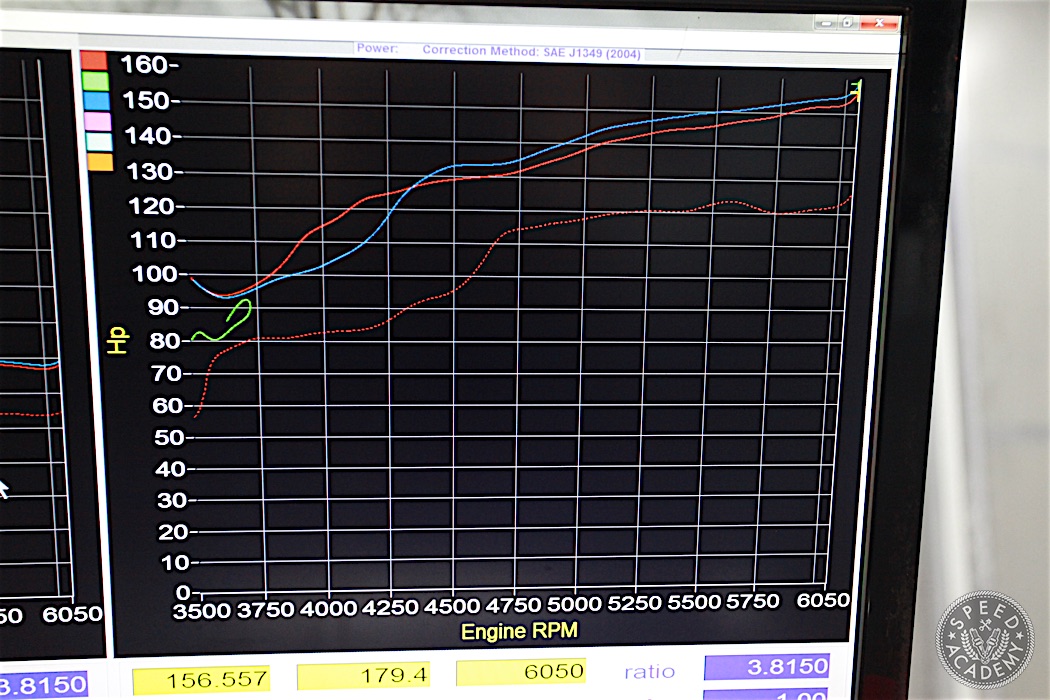 Dezod advertises 11-whp with their Red header on the tC2, and AEM advertises 7.6-whp with their cold-air intake on this car, so we were hoping to see about 20-whp. We were not disappointed, since we saw a repeatable 156.5-whp to the front hubs, for an impressive 23-whp gain over stock. 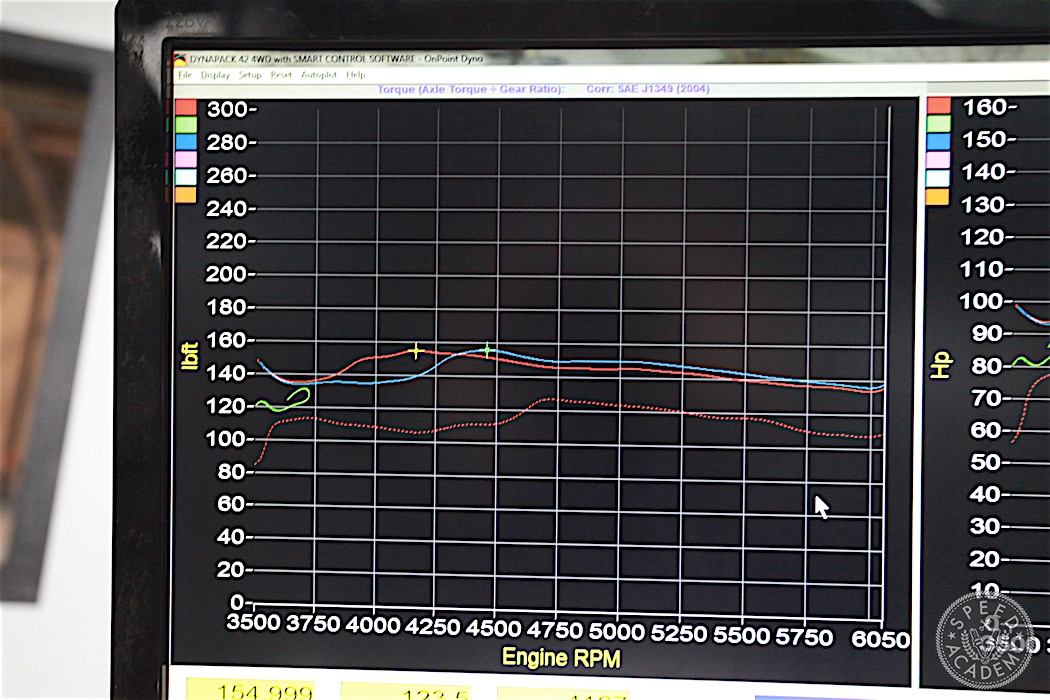 Torque improved by an even more impressive amount, jumping to 155.5-wtq from the baseline of 127-wtq for a peak gain of 28.5-wtq. This has surely made Mike’s tC feel a lot quicker around town, where torque is what gets you off the line quickly. 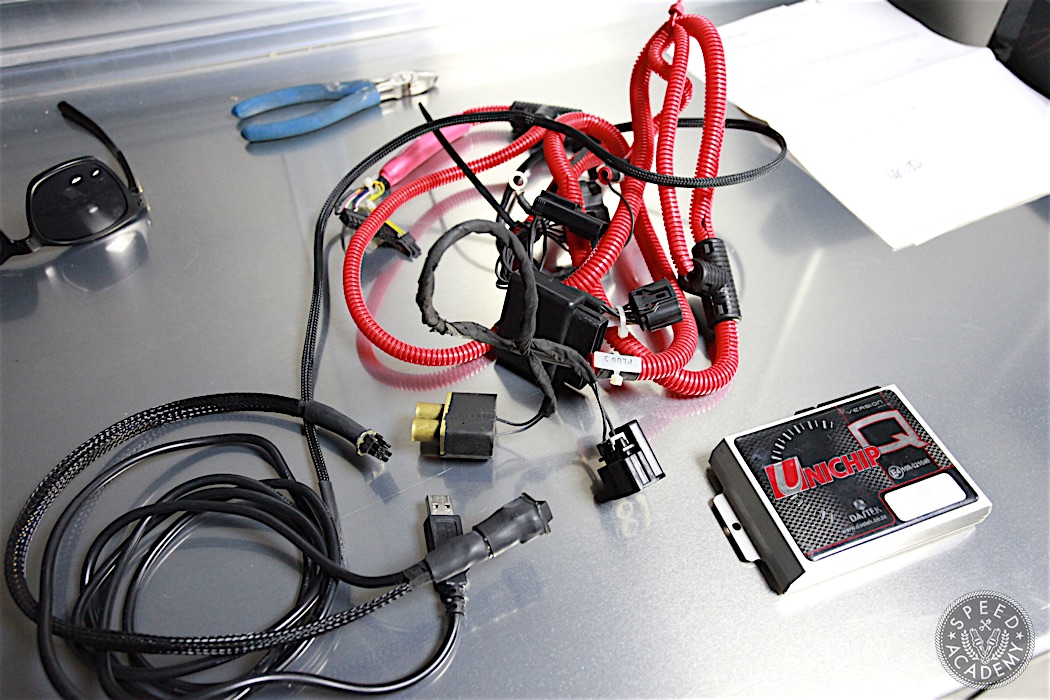 Mike bought a second-hand Unichip Plug & Play piggyback device that allows off-the-shelf tunes or even custom tunes to be run in place of the factory ECU mapping. We patched up some exposured wires (where it was rubbing on the CV boot near the crank position sensor from a poorly executed install by the previous owner), plugged in the harness (which intercepts the signal to the MAF, TPS, and CPS so that the Unichip box can modify fuel and igition timing based on these inputs), and attempted to setup the Unichip via Sasha’s laptop computer. However, driver files were missing from the Unichip’s online profile, which meant we couldn’t download any of their tunes or get the laptop to properly communicate with the Unichip control unit. We’ll see if we can sort this out and test out some of their OTF tunes in the future, but for now Mike will just have to be happy with the impressive gains the Dezod header and AEM intake delivered on the factory tune.

This is so crazy. Speed Academy is one of my favorite channels on YouTube (I’m doctorlobsteroctopus, you may see me spamming your channel comments with my excitement haha) and I actually stumbled upon your channel right after purchasing my 2013 TC and seeing your video at the track with this car. Then, today I am quite literally looking up unichips and headers performance on these cars and I saw this article shared on Facebook and then got to the site and realized it was from you guys. I’ve done a full loop with stumbling upon you guys and your info… Read more »

DavidBruner hey doc-lob-oct! Good to see you on here, and glad this story came in handy for you. The Dezod header definitely delivered on power. And we’ll definitely do a follow up story (and dyno video) on the Unichip and then a track test to see how much faster we can go with more power. Probalby going to do a tire upgrade too, maybe Bridgestone RE71R since those are apparently crazy fast and we haven’t tried them yet.

I know this is a rather old thread. I am a 2014 Scion tC owner and I am hoping to find the answers I need here. I have I/H/E on my car and I was planning to get the unichip to make the most out of these parts. Did you ever get the unichip situated on Mike’s car to re-dyno it and see if it made a change to the dyno numbers?

DavidPratte Yeah, I’m loving these write ups! The site is very attractive too, definitely a great setup. I can’t wait to see the unichip, I’m staying closely “tuned!” I’m looking to do a lot of these mods myself, so this will be perfect. And would you happen to know what lip/splitter combo he is running? It looks great, and I’d love to add one to my car.

DavidBruner DavidPratte I’m not sure what lip and splitter he’s running, but I’ve asked Mike to reply here so that you’ve got that info.

DavidPratte You rock, Dave! Thanks for always keeping it real with the fans and responding to us.

DavidBruner DavidPratte that’s my job! LOL. Mike can’t login to comment on his cell phone, but the lip/splitter combo is from a company called NIA Auto Design.  Hope that helps!

DavidPratte Well it’s why you guys will have a lasting and successful channel, just have to keep on growing!

Didn’t realize that was an NIA lip/splitter combo, it looks different in these photos than the ones i’ve seen..or I’ve lost it. Probably that. Thanks again Dave, hopefully I’ll be picking these up soon!

I was worried that my third day walking around the SEMA Show wouldn’t yield enough cars (and trucks) for my top 10 picks, but I was pleasantly surprised that even…