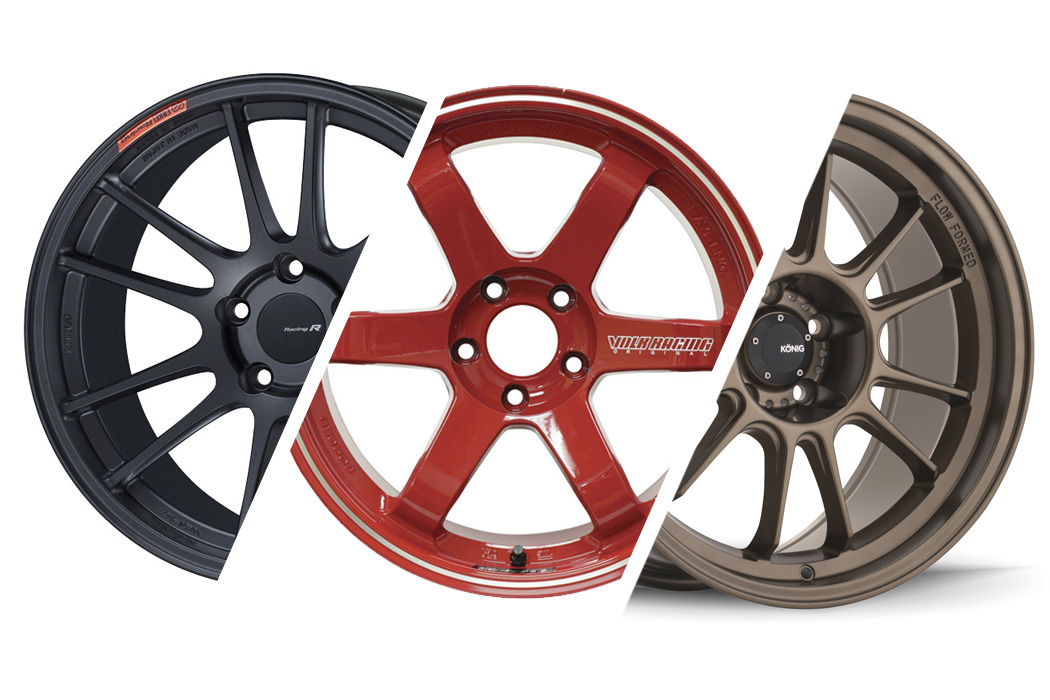 We’ve all seen pictures of wheels that have exploded out on track, and many of us have been at the track to witness these types of failures in person. Best case scenario the fender gets taken out when the wheel fails, worst case scenario (that we’ve seen) is the car gets severely modified as it slams into a wall on 3 wheels. 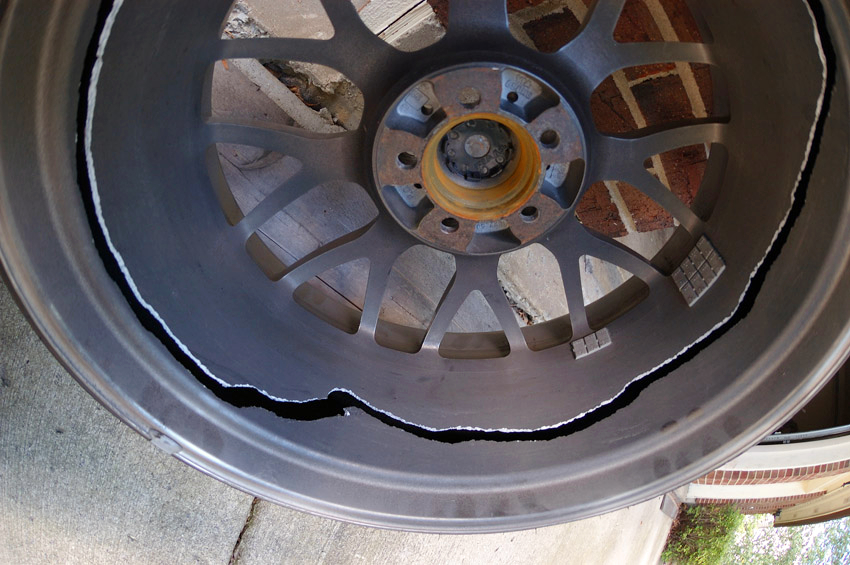 We’ve always run the strongest and highest quality wheels we could afford on our cars to avoid this kind of thing, so although we haven’t experienced a wheel failure ourselves, we’ve certainly witnessed our fair share at the track. To better understand these types of wheel failures, lets take a look at how wheels are constructed so that the importance of wheel strength and load rating comes into clearer focus before you go shopping for your next set of street or track rims.

If you ask the average car enthusiasts, chances are he (or she!) will tell you there’s two basic types of alloy wheels: cast and forged. And if you’re a serious wheel nerd, you’ll also know that cast wheels can be further subdivided into gravity cast and low pressure cast, where molten aluminum is either poured into a mold (gravity cast) or injected into the bottom of a pressurized mold so it fills the space from the bottom up (reducing the likelihood of air bubbles and thus porosity in the alloy). Low pressure cast wheels do have slightly better properties than a gravity cast wheel, but in a modern manufacturing plant these two types of cast wheels don’t differ much in terms of tensile strength or grain structure. The video above gives you a quick idea of how low pressure casting works. 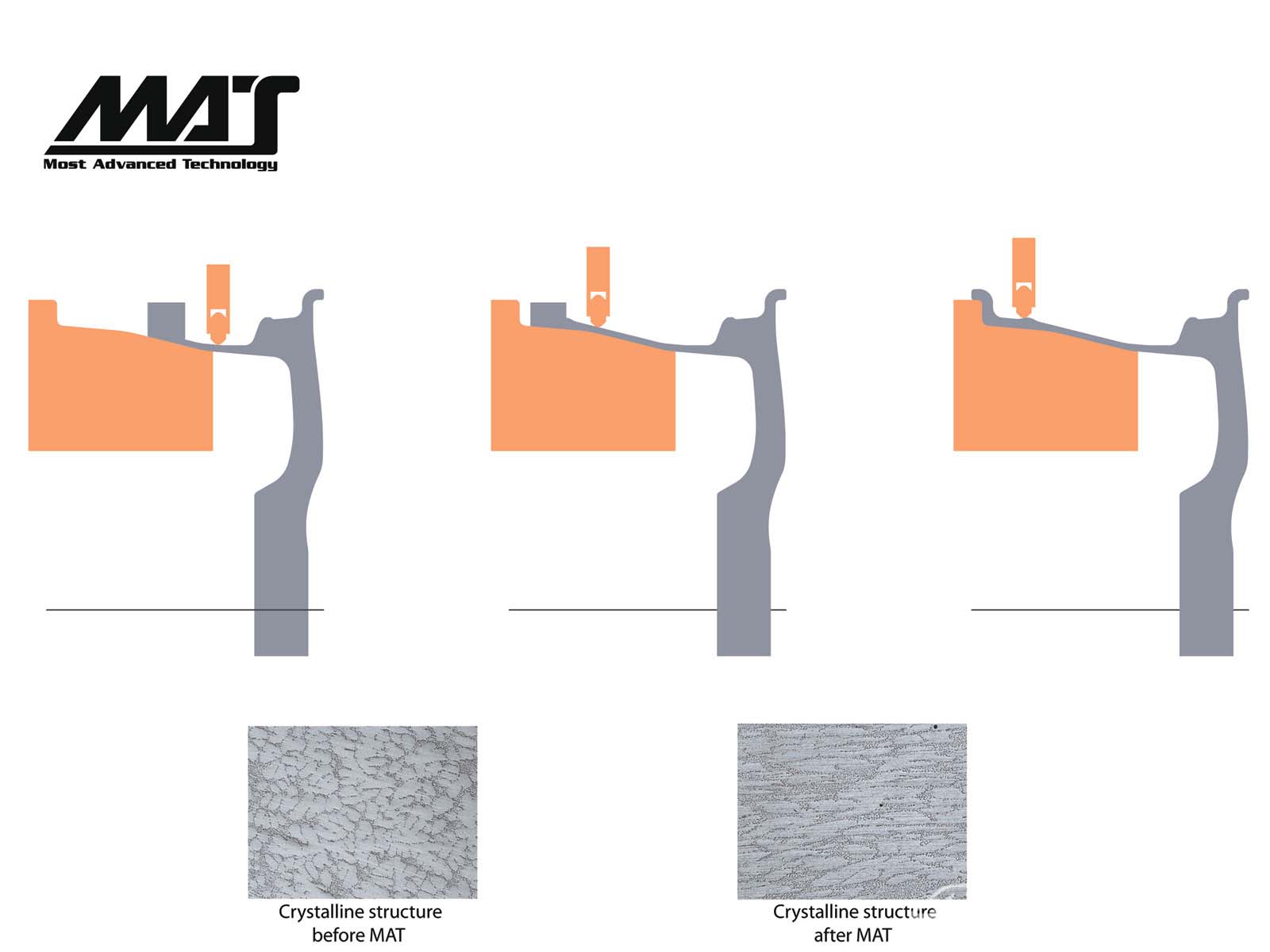 True wheel aficionados, and especially those with a performance orientation, will also know there’s also a hybrid wheel manufacturing method that produces a wheel that falls somewhere in between cast and forged called flow formed wheels. The flow forming process, sometimes called flow forging, rotary forging, spun rim, or rim rolling, begins with a cast wheel that is loaded into a specialized machine that spins the wheel while pressing steel rollers against the rim area to pull the rim to its final width and shape. Check out the video below to get a good sense of what that process looks like (sometimes heat is applied directly to the barrel area during this process, in other cases the precast wheel is heated in an oven before being flow formed).

As you can see, the flow forming process stretches and compresses the aluminum in the barrel area of the wheel, and in the process the structure of the alloy is realigned in a way that enhances its tensile strength and stiffness, giving it similar properties to a forged wheel in the barrel area. Flow forming also increases elongation, or the amount that a wheel is able to flex before arriving at a breaking point, an important safety feature if you’re smashing curbs at the race track or pounding pot holes on the highway. 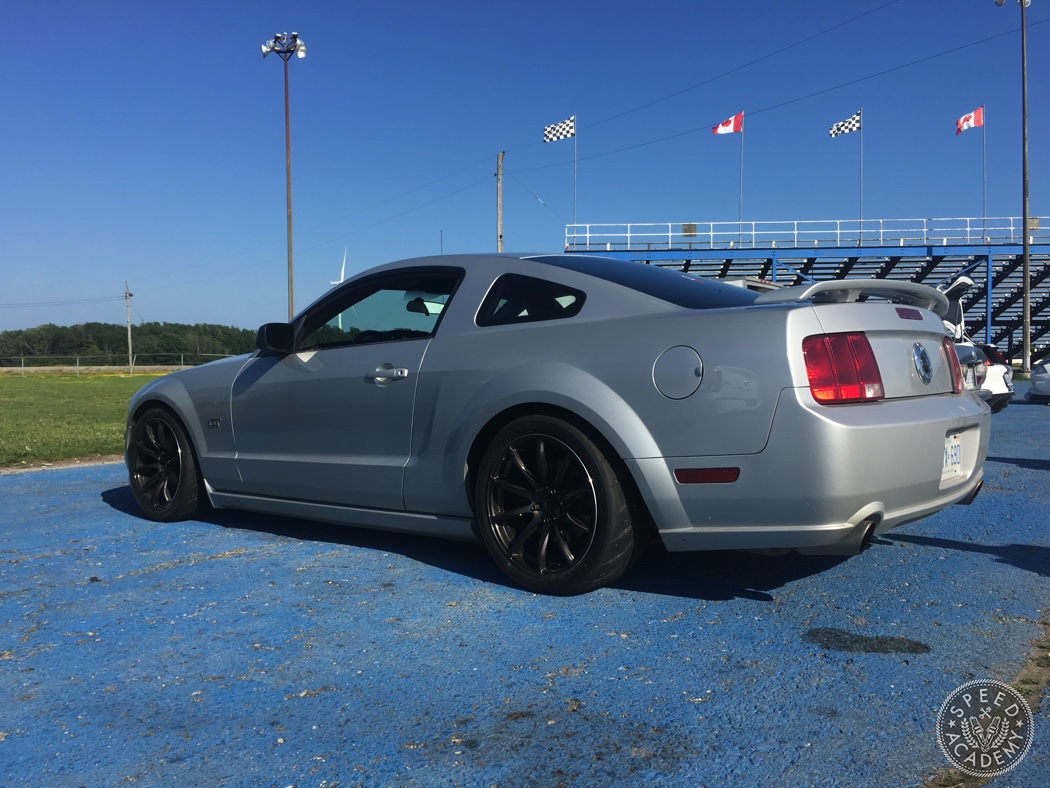 As a result of the flow forming process, you end up with a wheel capable of handling significantly higher loads than a cast wheel, all other design elements being equal. And because flow forming literally widens the barrel of the wheel, the precast wheel is narrower and thus lighter than a regular cast wheel. This means a flow formed wheel is typically about 25% lighter than a cast wheel of the same size and specs. These are all big wins for racers or performance enthusiasts, since you get the benefits associated with reduced unsprung and rotational mass in the barrel, which is furthest point from the center of rotation where mass reduction has the greatest effect, plus you get a stronger and stiffer wheel that can handle the loads you’re likely to throw at it on a race track or down your favourite canyon road. 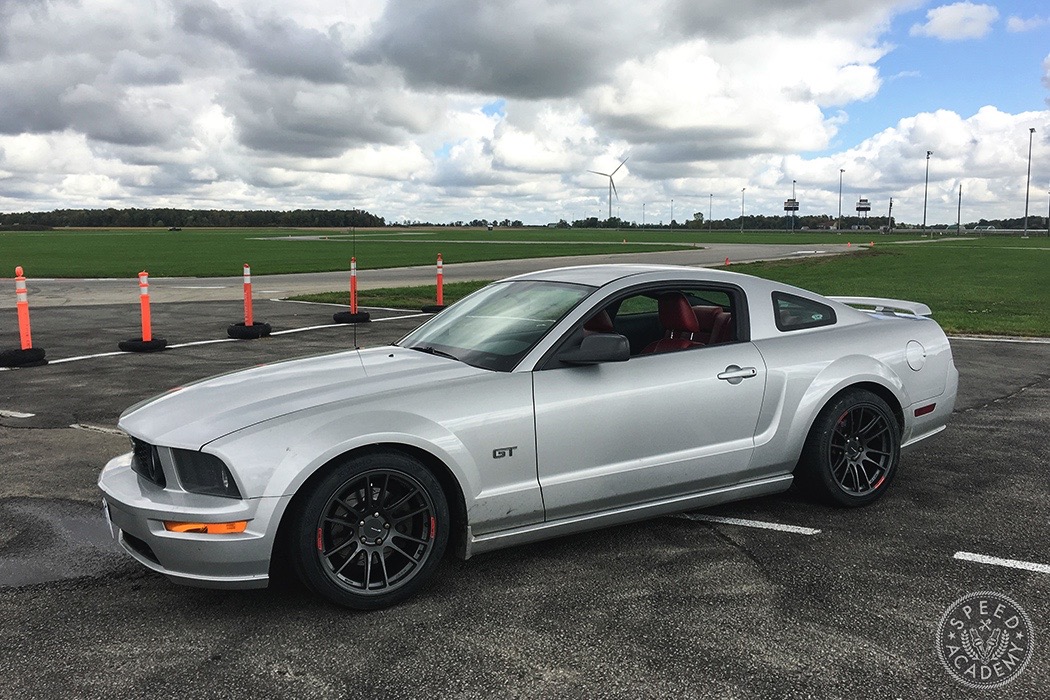 Enkei’s GTC01RR also look fantastic on our S197 Mustang and are among the strongest and stiffest MAT flow formed wheel the company makes.

Of course the extra manufacturing time and effort associated with flow forming means these wheels do tend to come at a higher price point than a cast wheel. Rays Gram Lights like the 57Transcend we wrapped in Toyo R888R’s and bolted up to the the Mullet Mustang, and the Enkei GTC01RR we ran on the Mustang as dual purpose street/track wheels are both very high-quality flow formed wheels that have handled a ton of track abuse without so much as a scratch. As you’d expect, price-wise these wheels fall in between a cast wheel and a forged wheel, with higher end Japanese brands like Rays and Enkei being at the upper end of the flow formed price range because of their outstanding design and well-earned reputation for quality and strength. 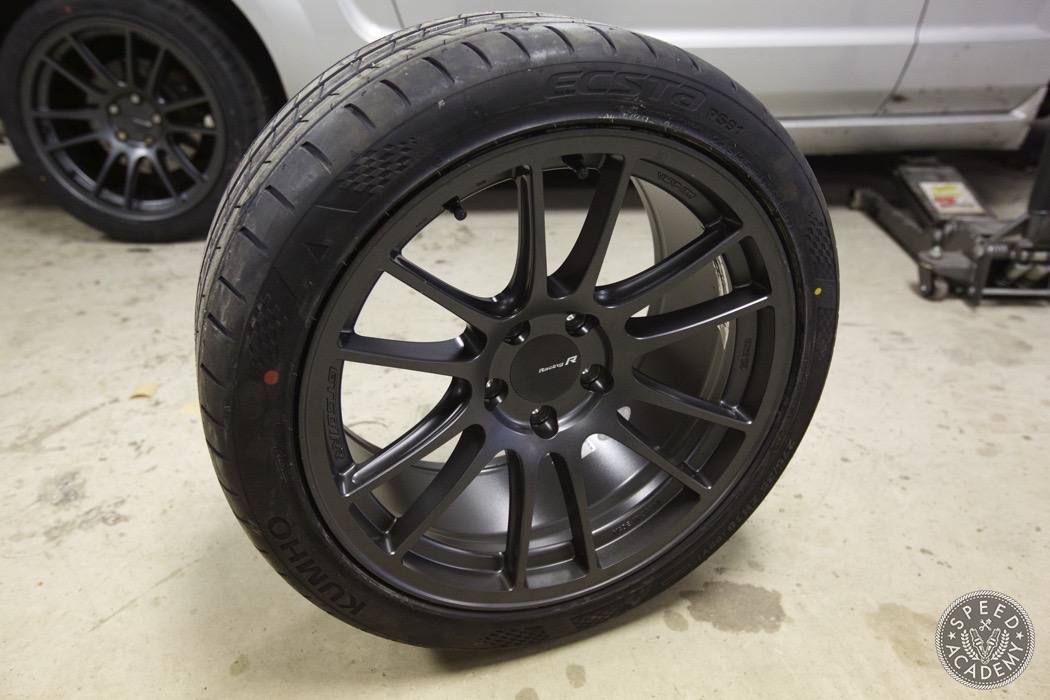 As a result, a higher end flow formed wheels like the GTC01RR and 57Transcend are pretty pricy at around $500/each, but that’s because these companies do a ton of R&D to take weight out of the wheel without losing any of its stiffness or strength. Enkei, for example, focused in on the complex cross-sectional area of the spokes on the GTC01RR to ensure this wheel is as strong and as light as possible, the 18×9.5’’ size we ran on the Mustang tipping the scales at just 20.3-lbs while being among the very strongest wheels Enkei produces. As a point of comparison, a fully forged 18×9.5’’ Volk Racing TE37SL weights about 2-lbs less and costs about $750/each. 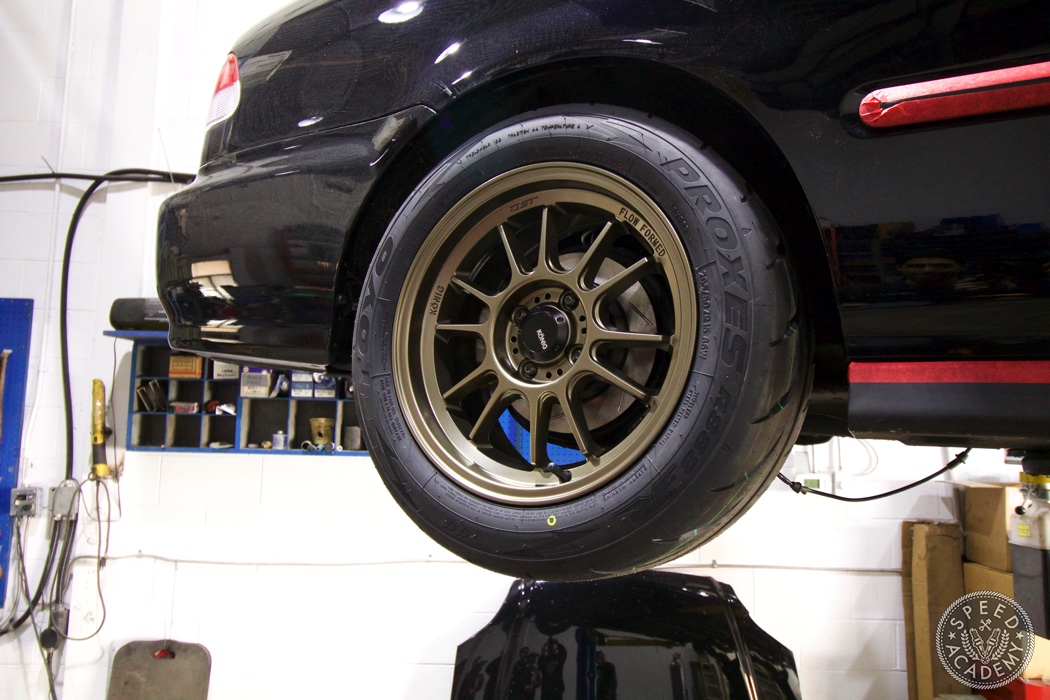 With flow forming becoming a more widely used technology in the industry, there are also a growing number of lower cost flow formed wheels on the market these days, including the Konig Hypergrams we equipped our 5 Day Track Build Challenge EK Civic with and the Konig Dial-In model we equipped our buddy DriverMod Phil’s Ecotec Miata with. 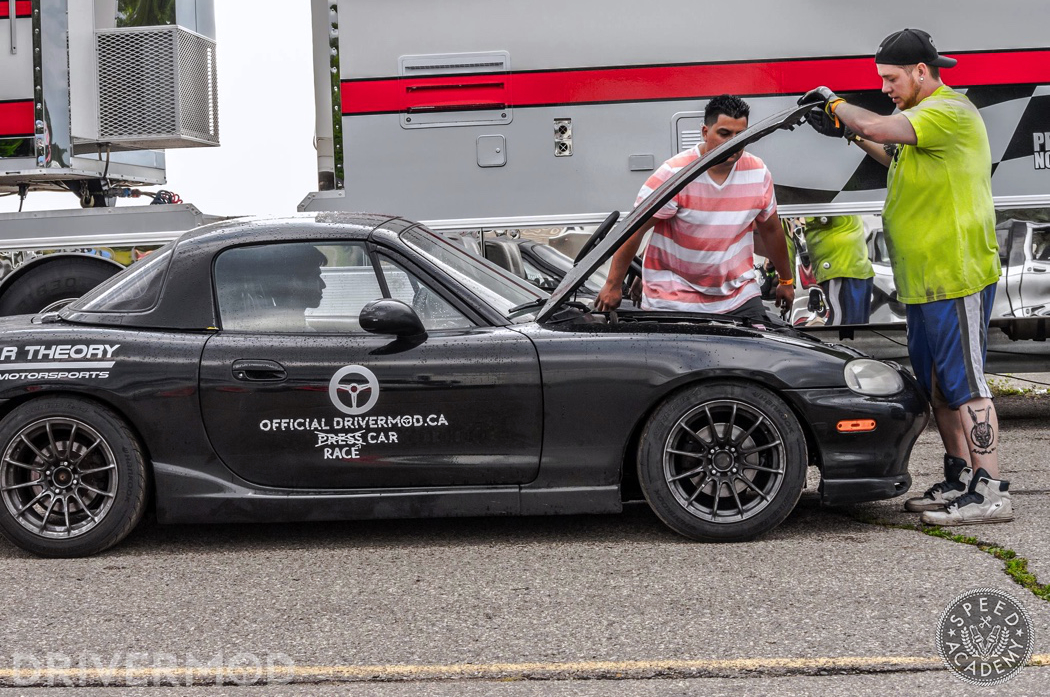 If you do a quick Google search, you’ll find the 15×9’’ Konig Dial In wheels we put on Phil’s Miata can be had for as little as $133/each from Good-win Racing. That’s crazy cheap for a flow formed wheel that only weighs 12.7-lbs. By comparison, a fully forged Volk Racing TE37V in a 15×9’’ size costs about $600/wheel and weigh about 1-lb less, while at the opposite end of the spectrum a typical eBay-sourced low-cost cast wheel goes for $60-100/each and weigh more like 15- to 17-lbs each and perhaps more importantly may not have the strength or the load rating (if you can even find that information) to handle repeated track use.

Great read, really interesting to finally know what all of these mean. Have always been curious, but didn’t want to scour the internet for all of this haha.