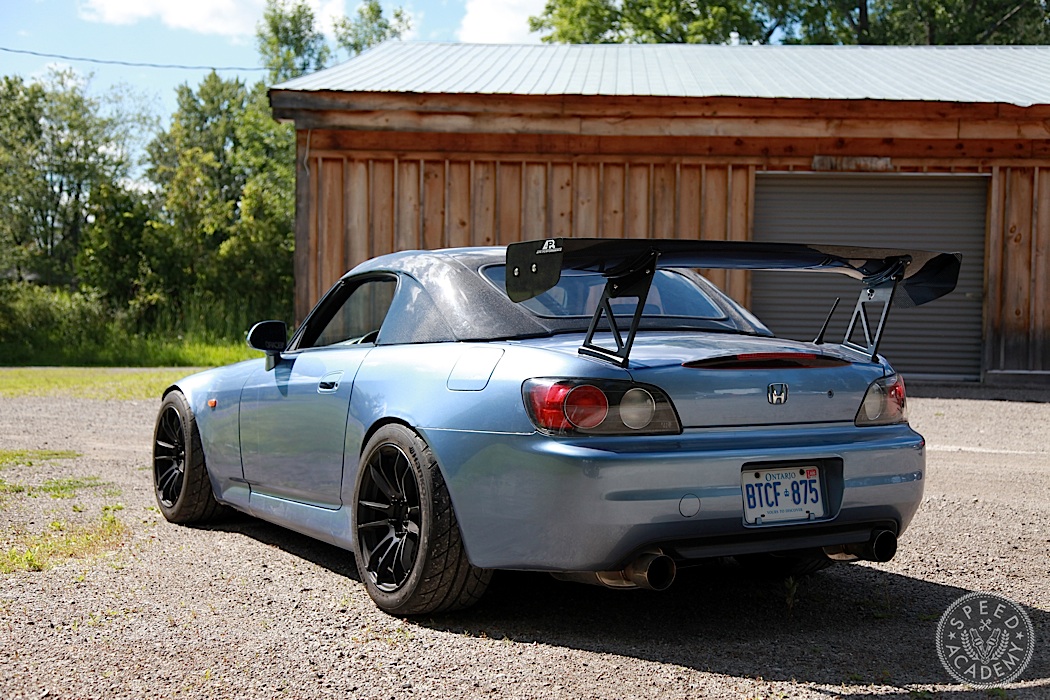 Our previous update showed you the “joys” of installing a Rockstar Garage roll bar and Recaro Profi SPG race buckets in the S2000. The Buddy Club seat rails definitely made installing the seats easier, and installing the Takata Racing Race-4 harness on the driver’s side was a relative breeze. But when it came time to bolt down the Seibon carbon fiber hardtop we sourced from Presenting Sponsor Turn14 Distribution, well, we didn’t realize we needed to order a mounting kit separately. 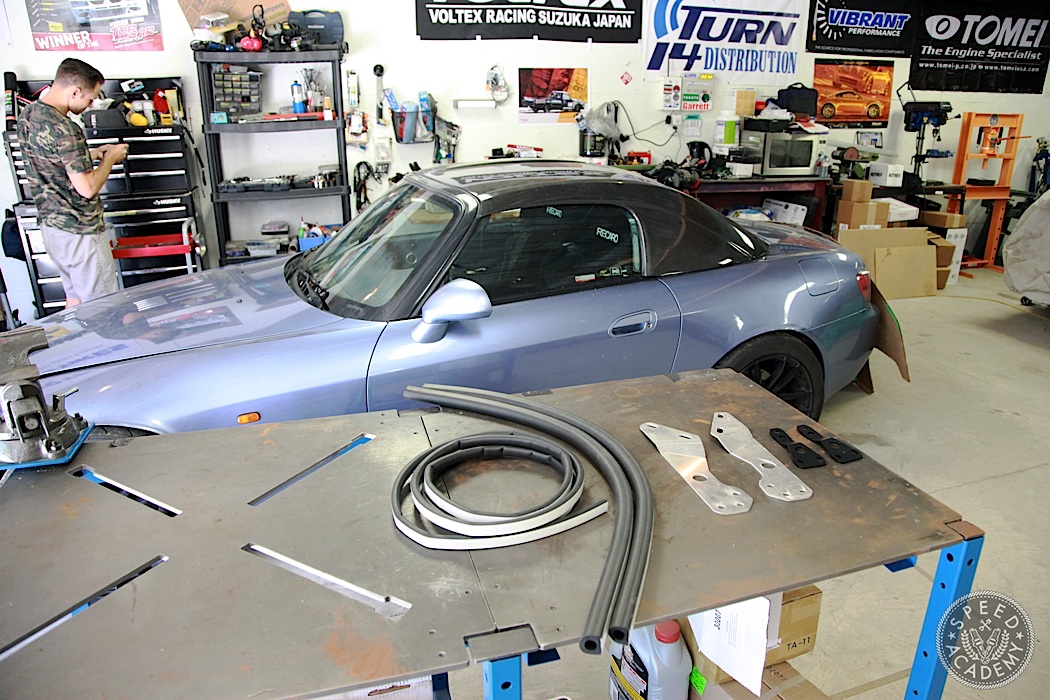 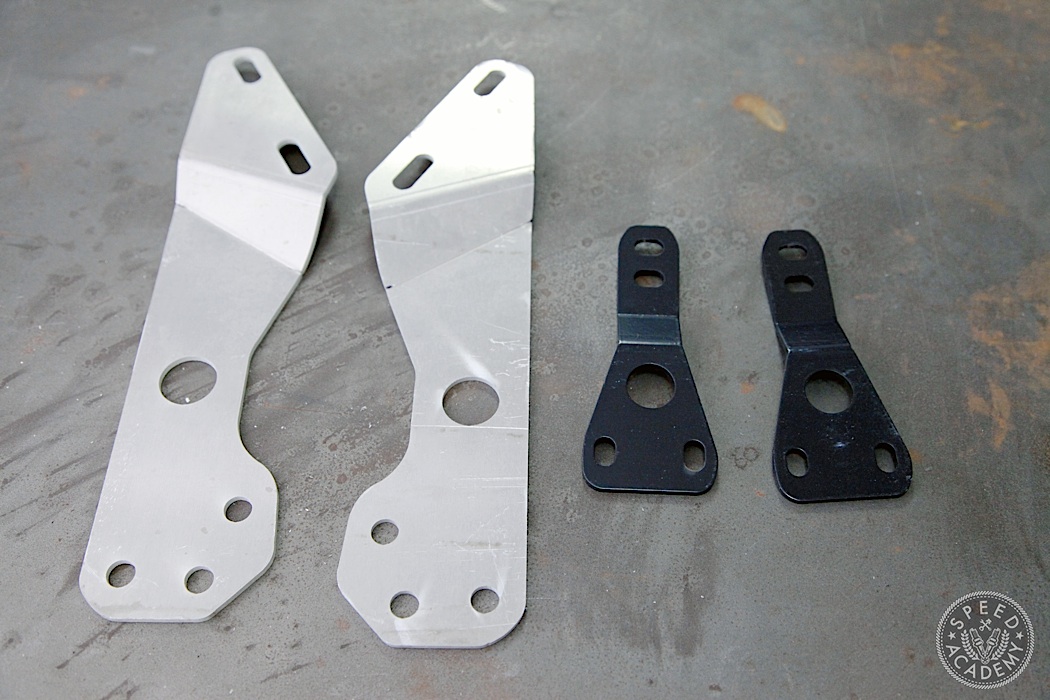 Seibon doesn’t provide a mounting kit with the hard top, but they do design it to mount perfectly with the OE Honda mounting kit. However, the Honda kit is stupid expensive, so we instead sourced Rockstar Garage’s mounting kit including front and rear brackets and rubber seals for the perimeter of the hard top and the window openings. 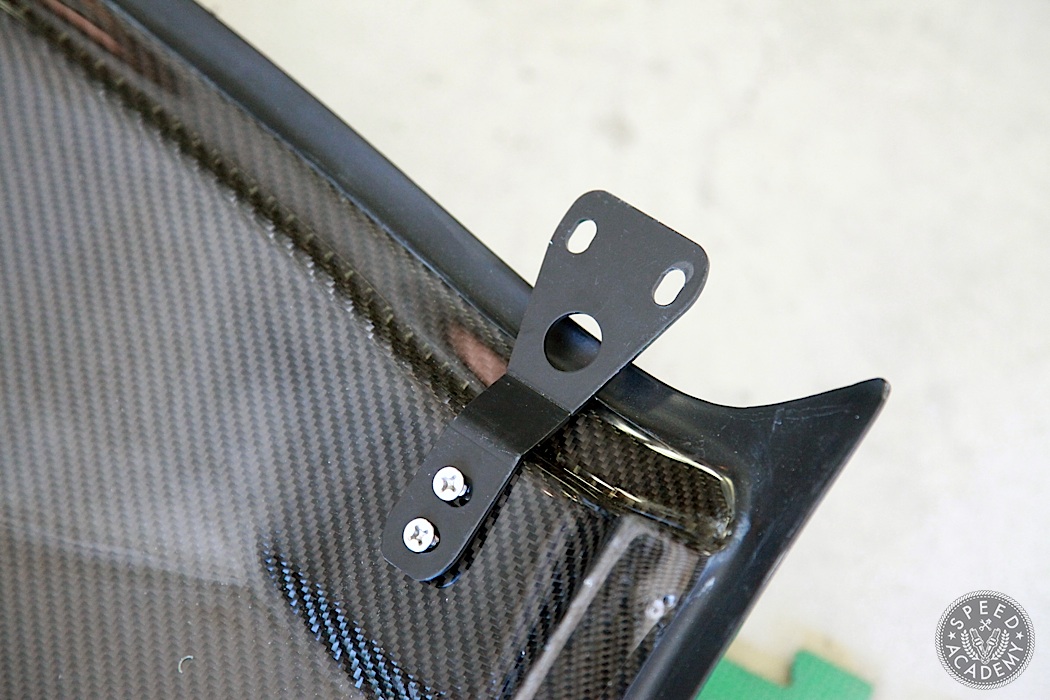 We could have opted to reuse the front latch from the soft top to secure the hard top, but since we have no plans to remove the hard top we prefer the less bulky and more adjustable front brackets from RSG. 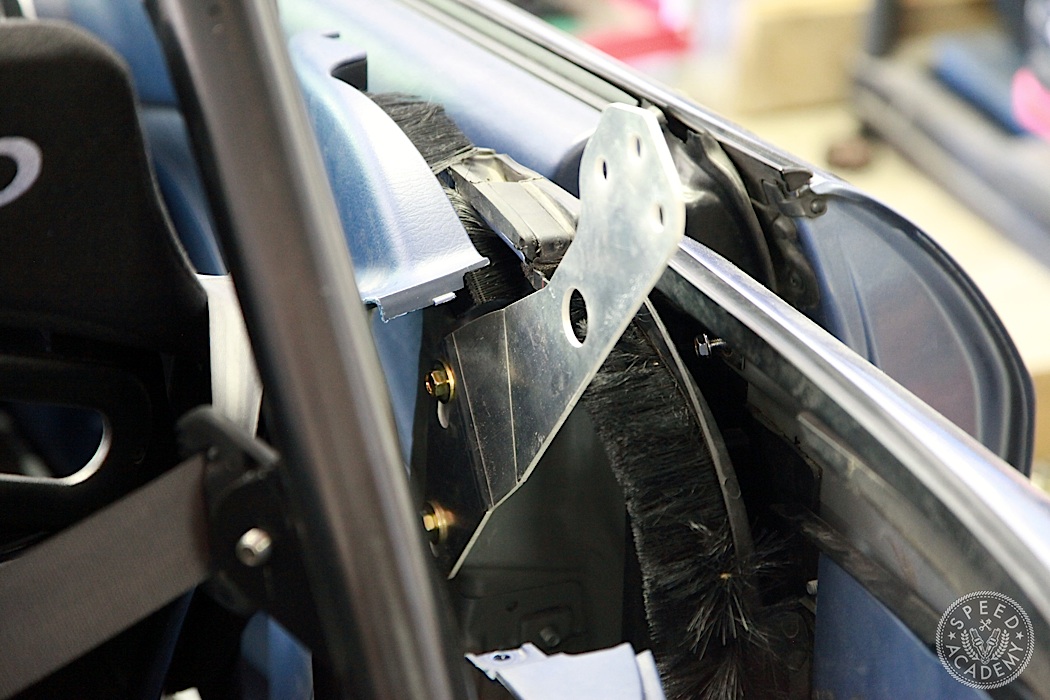 And since we removed the soft top entirely, we also went with RSG’s race rear brackets that permanently affix the rear of the hard top just behind the doors using OE bolts and fastening points, rather than the quick discount OE style brackets that install along the back of the hard top. Using these bolt-in brackets should also give us a little added security against theft as compared to using the quick disconnect mounts. 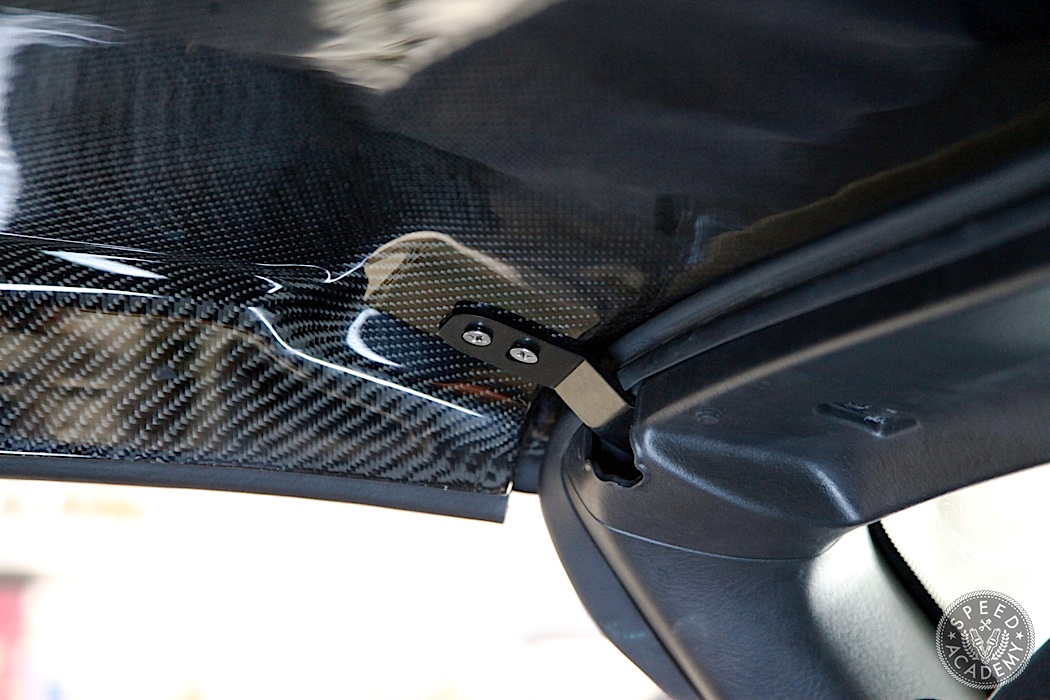 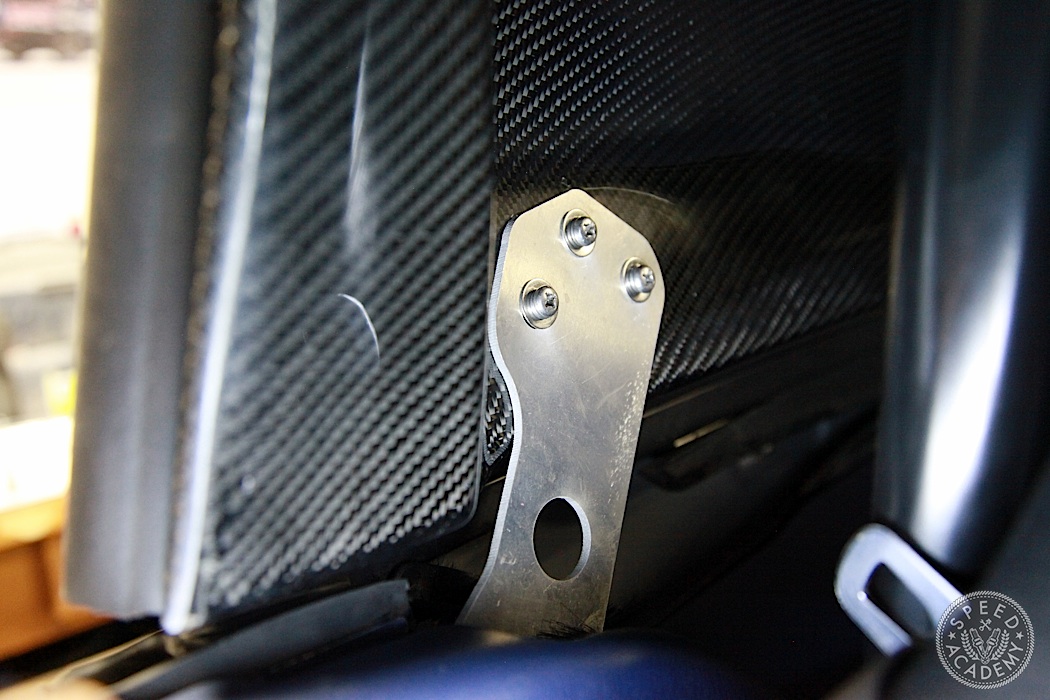 As you’ll see in our aero install video (at the bottom of this post), we eventually figured out that the best way to mount the hard top with these brackets is to attach the side brackets to the hard top first and then to the chassis, and to attach the front brackets to the chassis first (by the sun visors) and then to the hard top, so the opposite of the images above. Ya, we have an uncanny ability to do things backwards the first time, but the adjustability (slotted mounting holes) of the RSG brackets made the job much easier and helped us position the hard top perfectly before tightening everything down. 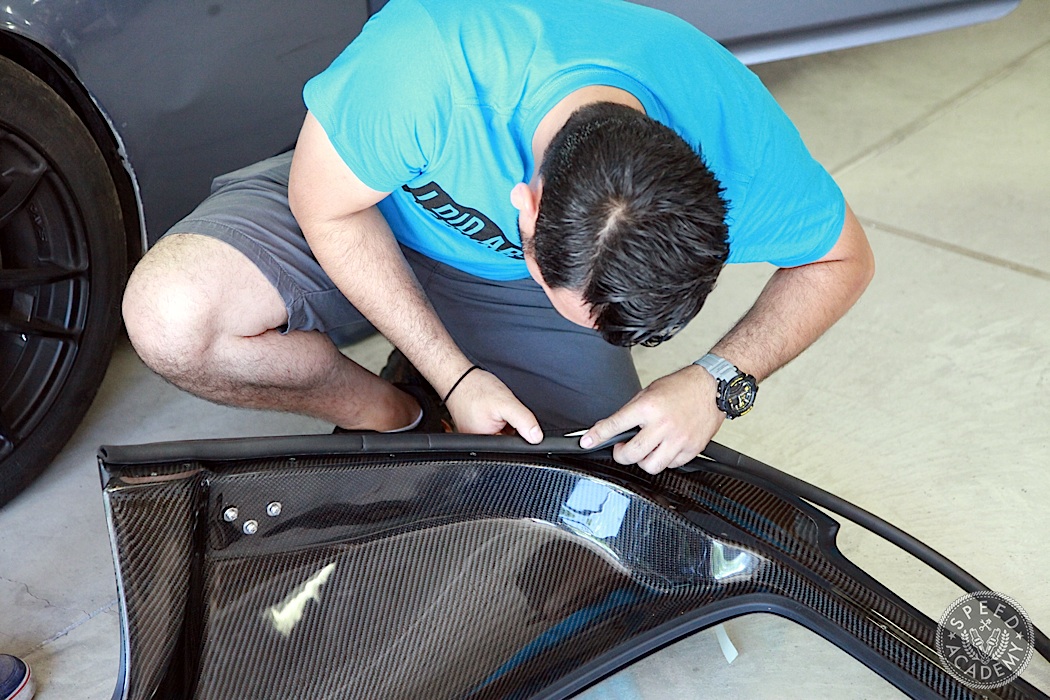 Of course before we could tighten the hard top down, first we needed to install the rear seal and door window seals. RSG provides high quality seals with 3M adhesive backings, and they’re plenty long too so you can trim them to fit. Installing these isn’t rocket science, since it’s pretty obvious where the seals need to be routed. 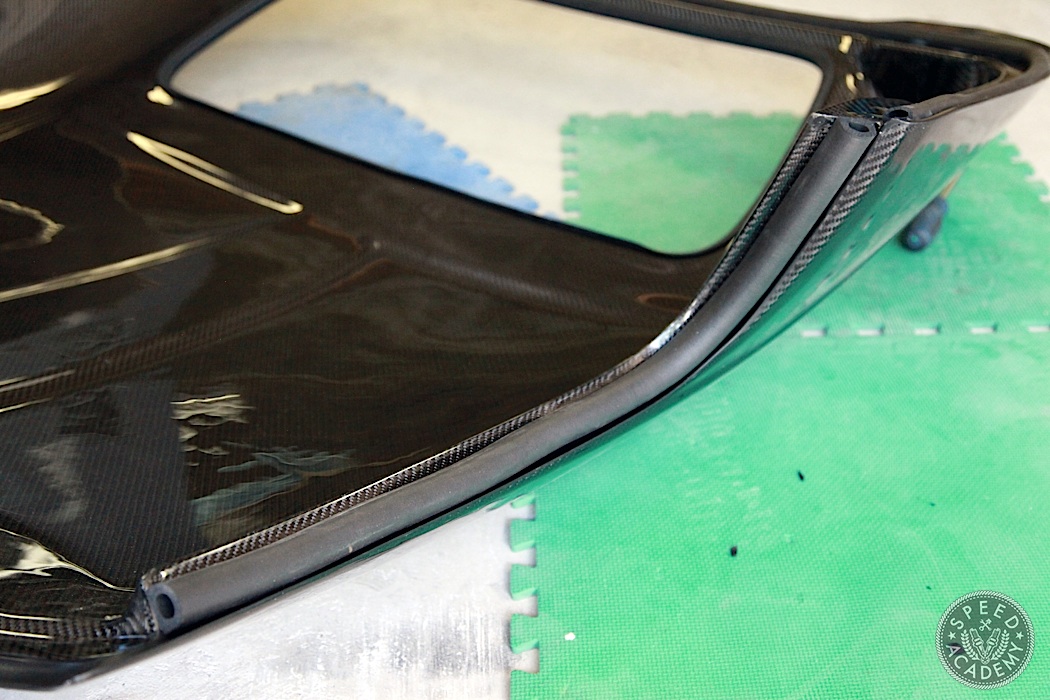 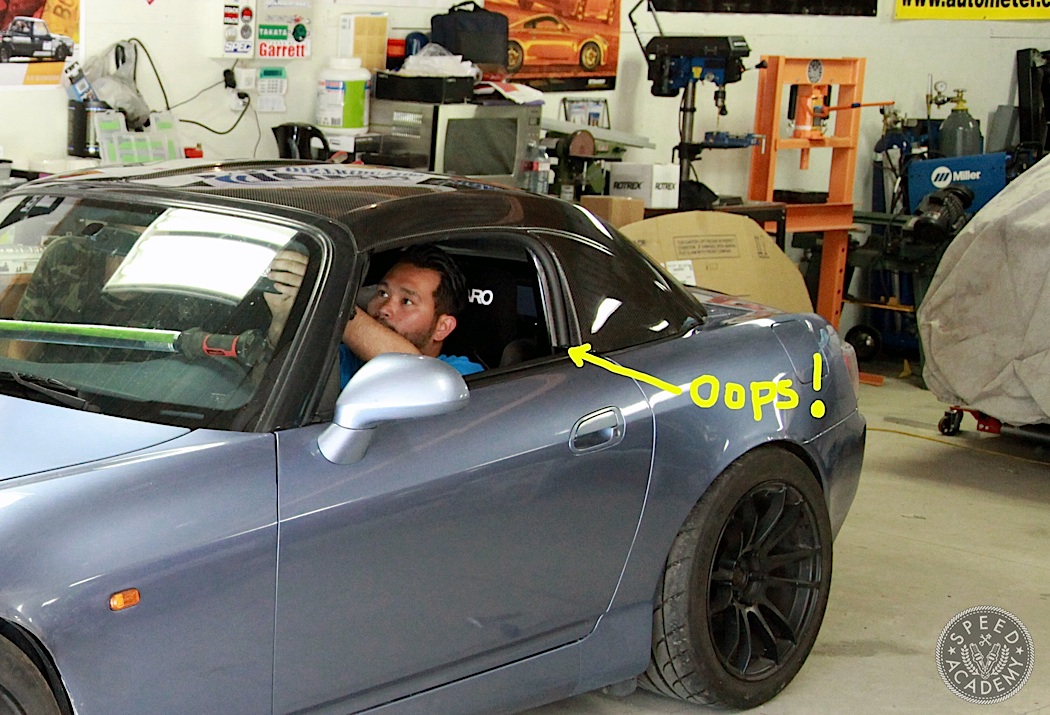 Turns out the window seals aren’t so obvious in terms of what length to cut them. We cut ours based on the length of the mounting surface on the hardtop, but this actually leaves about an inch gap at the rear bottom once we installed the hardtop on the chassis. Doh! In hindsight we should have taken measurements with the hardtop temporarily in place on the car. Live and learn. We also learned that it’s important to lube the rear seal to prevent squeaking, and although we used bearing grease in our Bonus Video Episode we’ve subsequently learned (from the insightful YouTube comments) that we should have used a silicon grease like Honda Shin-Etsu, since it won’t eat away at the rubber the way bearing grease will. 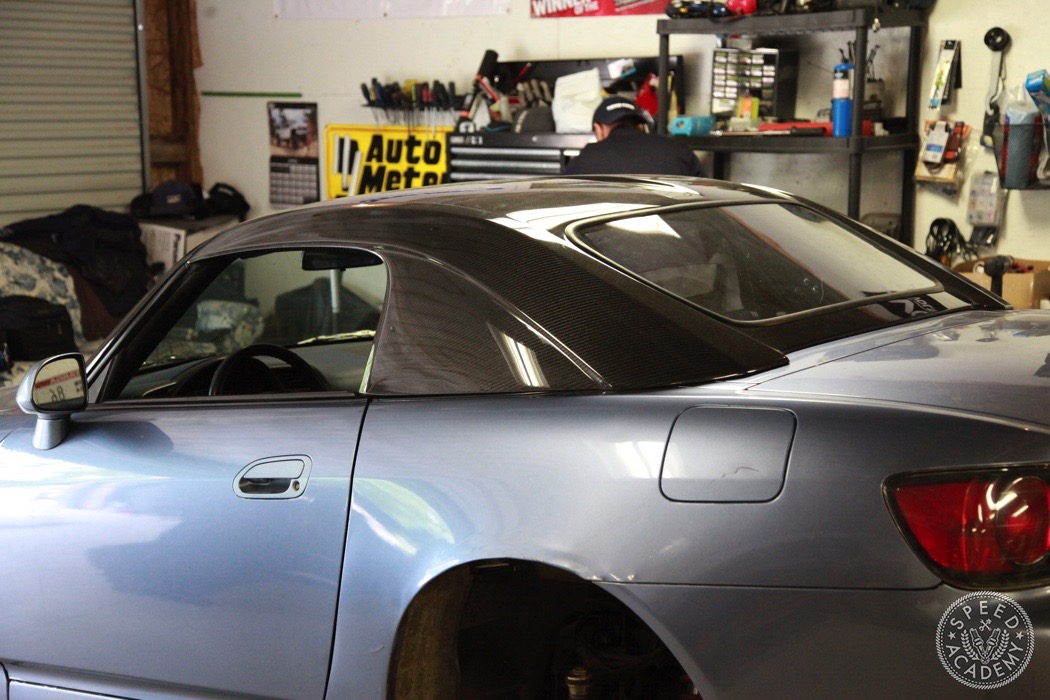 The Seibon hardtop sure looks sexy doesn’t it but looks aren’t the only thing we were going for by adding a hardtop. 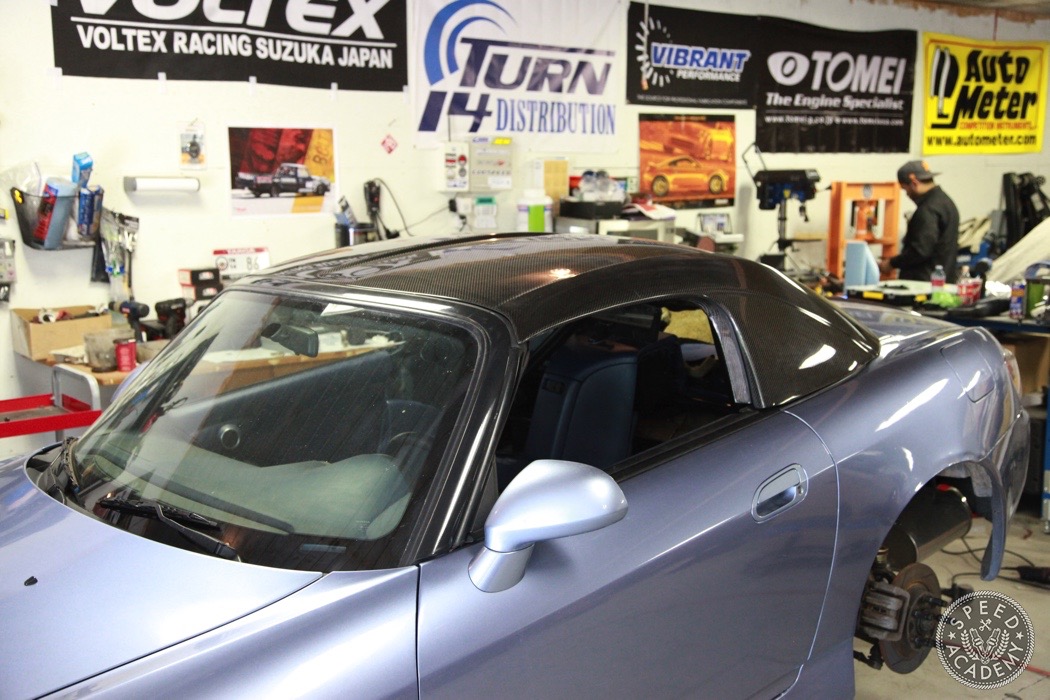 The sleek design allows for better airflow versus a soft top and we’re all about smoothing out the air in hopes of getting less drag at higher speed which in turn results in lower lap times. 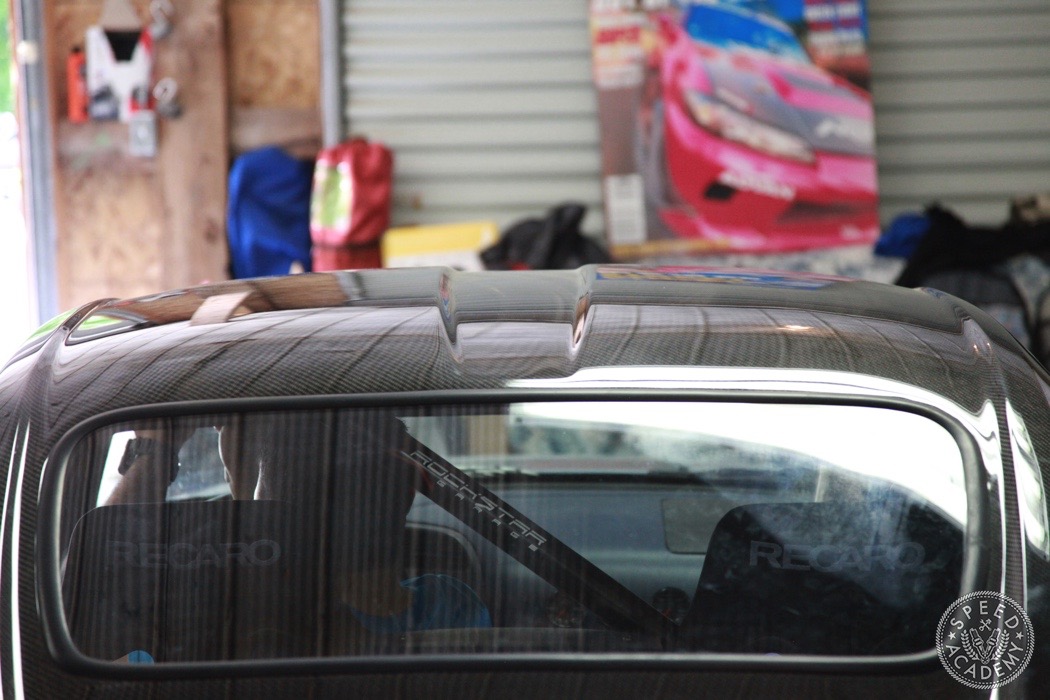 Not only that but the hard top also helps channel air towards a wing, which was next on our install to-do list. 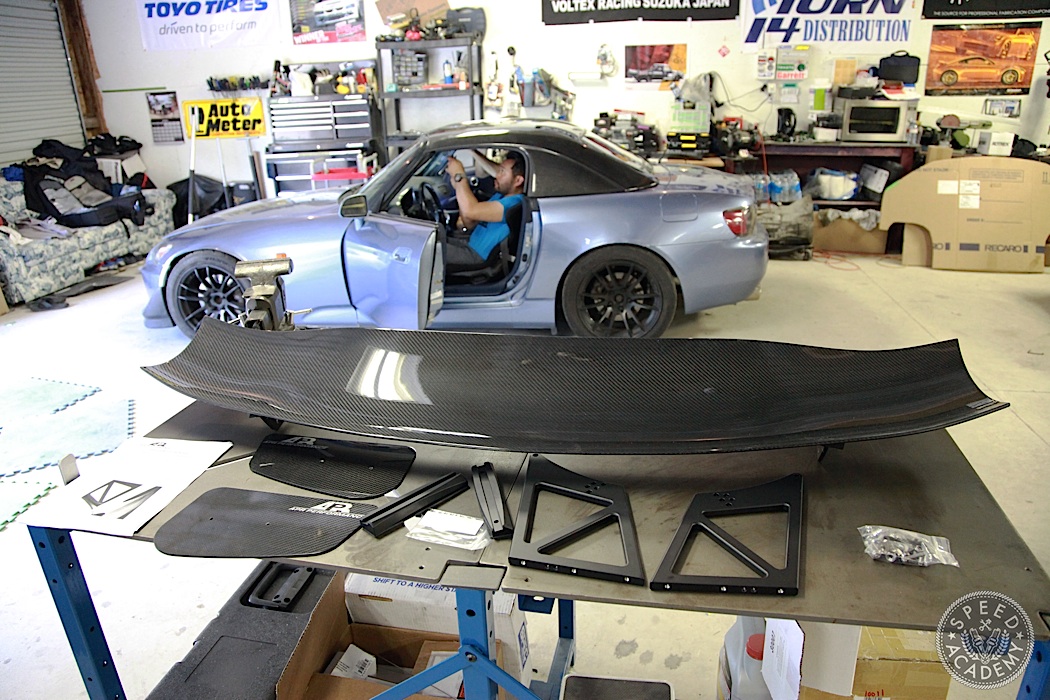 With the hard top bolted down securely, it was time to start adding some downforce. For rear downforce we decided to go with APR Performance’s GTC-300 wing, a 3D airfoil that makes an impressive 664 lbs/ft of downforce and just 92 lbs/ft of drag at 80-mph with the wing set at a 10-degree angle of attack. 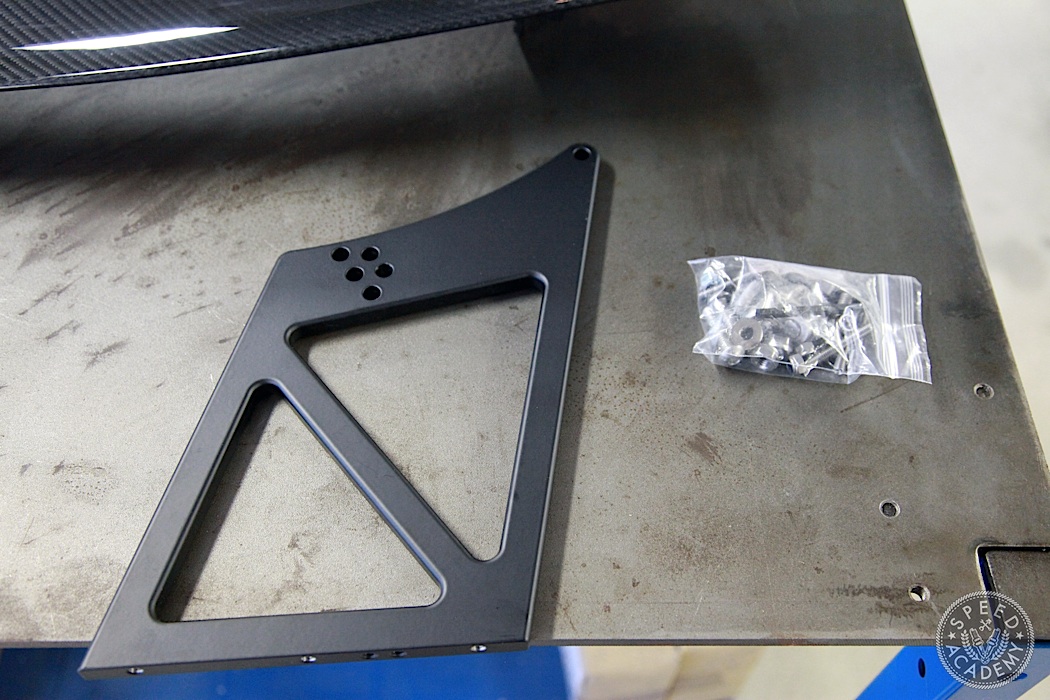 Built from pre-preg carbon fiber, the GTC-300 is extremely light and strong, and the 6061 aluminum pedestal mounts are drilled to allow the wing’s angle of attack to be adjusted from 0 to 15 degrees. 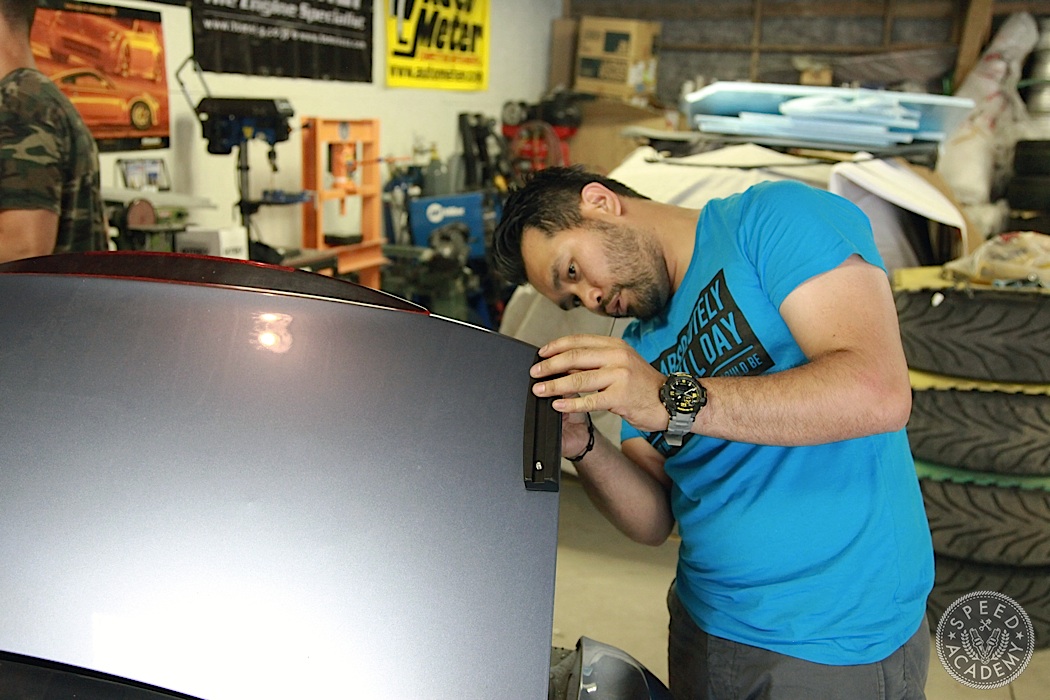 The pedestals and wing are mated to the trunk lid via these application specific base plates. As you’ll see in the video, we test fitted the wing in place on the base plates to determine exactly where we wanted to drill, and since the plates go right out on the perimeter of the trunk where it’s reinforced underneath we haven’t added any additional backing plates.

If you’ve been following our Drift Car Build-Off video series on our YouTube channel, then you know we bought the cheapest E46 M3 we could find ($4,000 USD), and that…