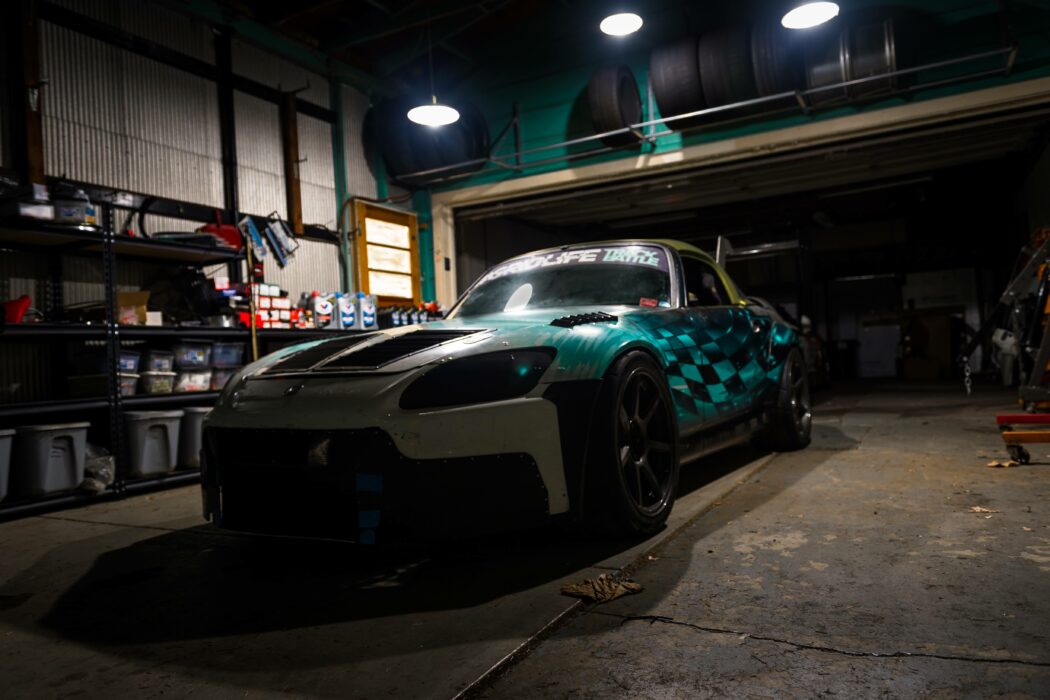 Over the years I have sporadically given you build changes and new parts on the S2000. In fact, you all let me know often that sometimes you have no idea what the heck is going on. With this latest version of the S2000 named Sheri V7, I’m going to take a more structured approach to the build, development, and quality seat time before major changes. With that being said, I want to go over each system in the S2000. I want to share with you the “what & why.” Let’s start with the biggest system that usually kicks everyone’s ass, the cooling system. 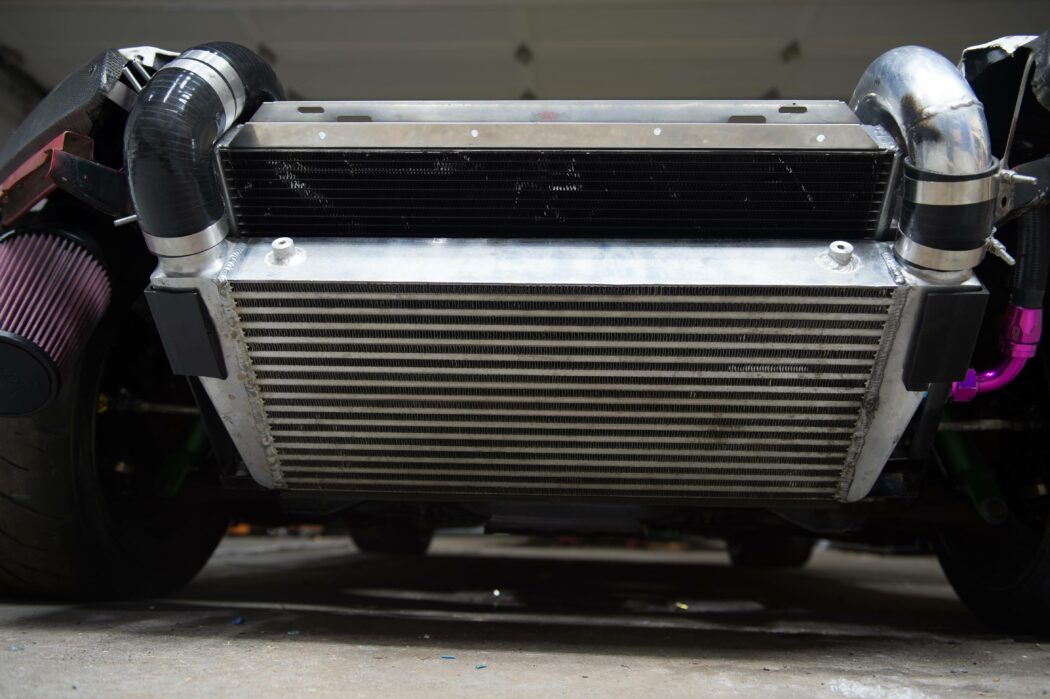 First off, go read this Professional Awesome Cooling Improvements and come back here. I’ll wait for you. Awesome, I’m going to explain some things because I know you didn’t read it. The king of keeping your vehicle cool is airflow. You need to get air through those heat exchangers for them to work properly. Air takes the path of least resistance, so you literally have to force it to go through heat exchangers. For us overcompensating forced induction people, we need to seal that intercooler to the radiator as best as we can. When the air goes through the intercooler it slows down (how much depends on how efficient your intercooler and/or radiator is, to begin with so by the best damn cores you can). The further away your radiator is from your intercooler the more likely the air in between your heat exchangers has a chance to stall. That means slow down enough to the point where it’s lost all its motivation to pass through anything. To avoid that I chose to make those to get well acquainted and put them on top of each other with about a 25mm gap (yeah fuck off imperial system). 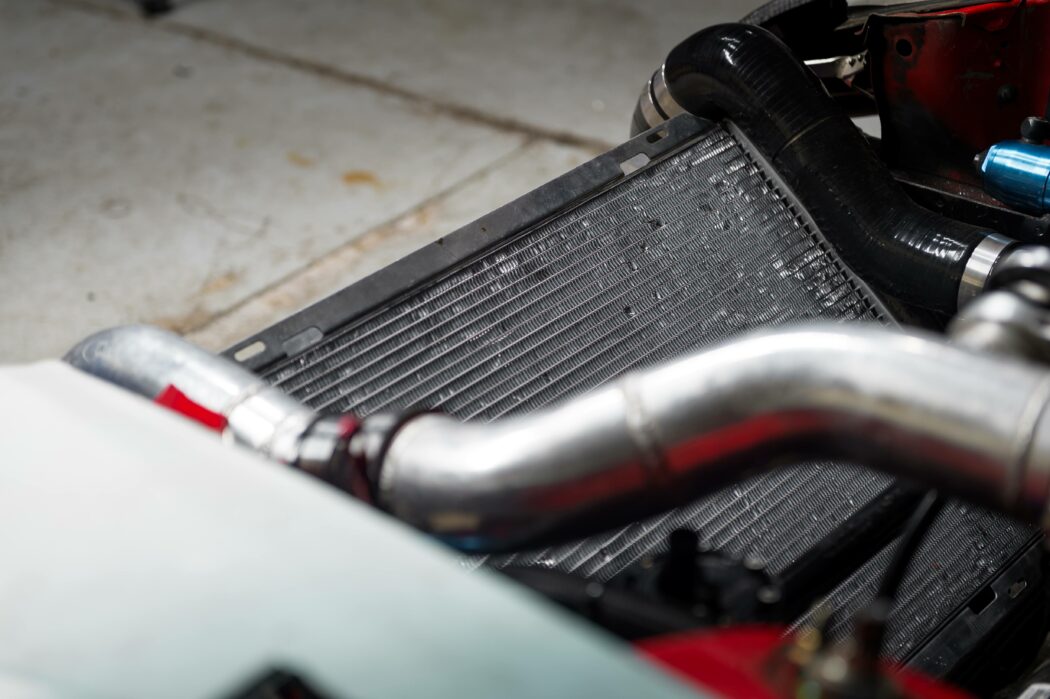 Exhaust
I’ll cover bumper openings in more detail when we get into aero but a rough estimate would be 30% of the square inches (height x length of the core) of your largest cooler should be a big enough opening to keep everything cool. What’s also important is the exit of your coolers. You actually want this to be at least double what your opening is. Exhausting it into the engine bay is also acceptable since air will always find its way out of something but I took the safe practice and let it flow freely out of a set of these louvers from Trackspec Motorsports (not all systems need louvers, a well-designed system by a qualified engineer(s) or aerodynamicist can make a highly efficient system without them, don’t @ me). By letting the air freely flow out of the hood it aids in creating overall front end downforce which we will go over in-depth in a later article. 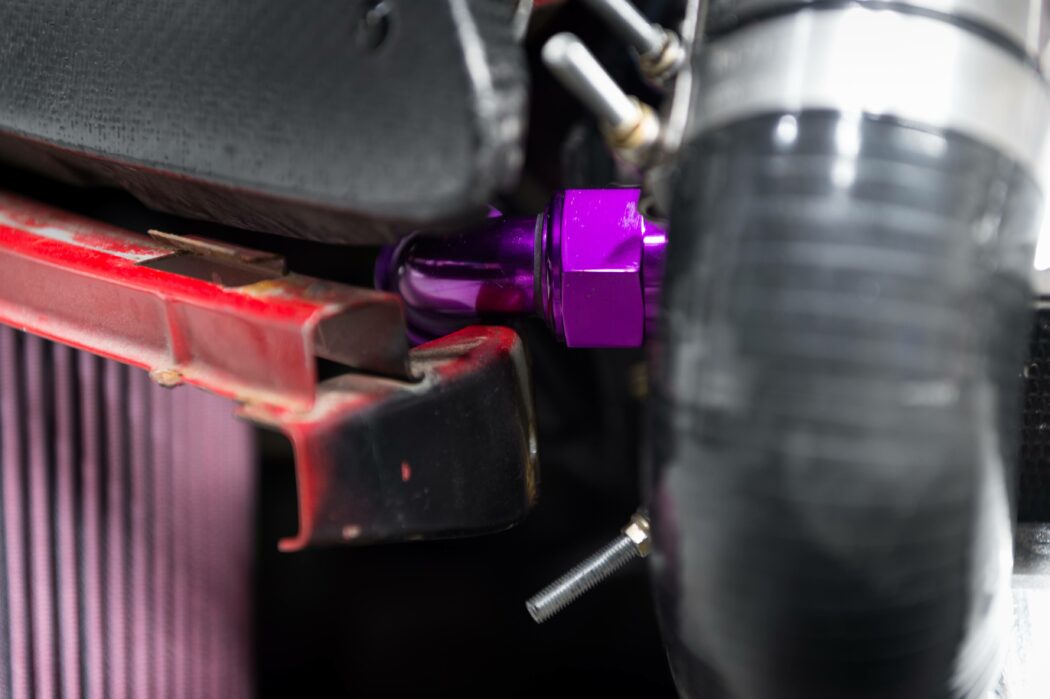 Now that we covered what we are doing with the air, it’s time to cover the other half of the cooling situation. The water, the H20, the happy head gasket juice. Just like airflow is king, so is coolant flow. There are some myths out there that you want to slow the coolant down to dissipate heat better in the radiator. Well, I don’t think that’s the case. I’m honestly struggling to think of a funny analogy on why this is stupid so I’ll just explain why. Water absorbs and dissipates heat at a rapid curve. The longer you cool water also decreases the rate it cools and the longer you heat water also decreases the rate that it heats. What that means is if you were to keep water in your engine longer it will actually heat the engine components since the rate that it’s absorbing heat is dropping. There are also usually hot spots in an engine where the coolant has to go around an edge or change directions, which only exacerbates the problem even more. Higher flow rates not only help the water be more efficient it also aids in keeping temperatures more uniform across the board.

With that being said, I wanted to run the least restrictive radiator lines that I could package well. I wanted to run dash twenty stuff but I could not get it to make some of the 90 degree turns I needed so I settled on dash sixteen. I also do not run a thermostat because it creates a restriction. My routine is letting it run in hot pits and on the out lap, it’s usually right around 180 degrees Fahrenheit before the first hot lap. I’m running an OEM K24 water pump but it wouldn’t be a bad idea to adopt an electric water pump like a Meziere or something similar. In fact, some performance cars come from the factory with electric water pumps such as the E92 M3. 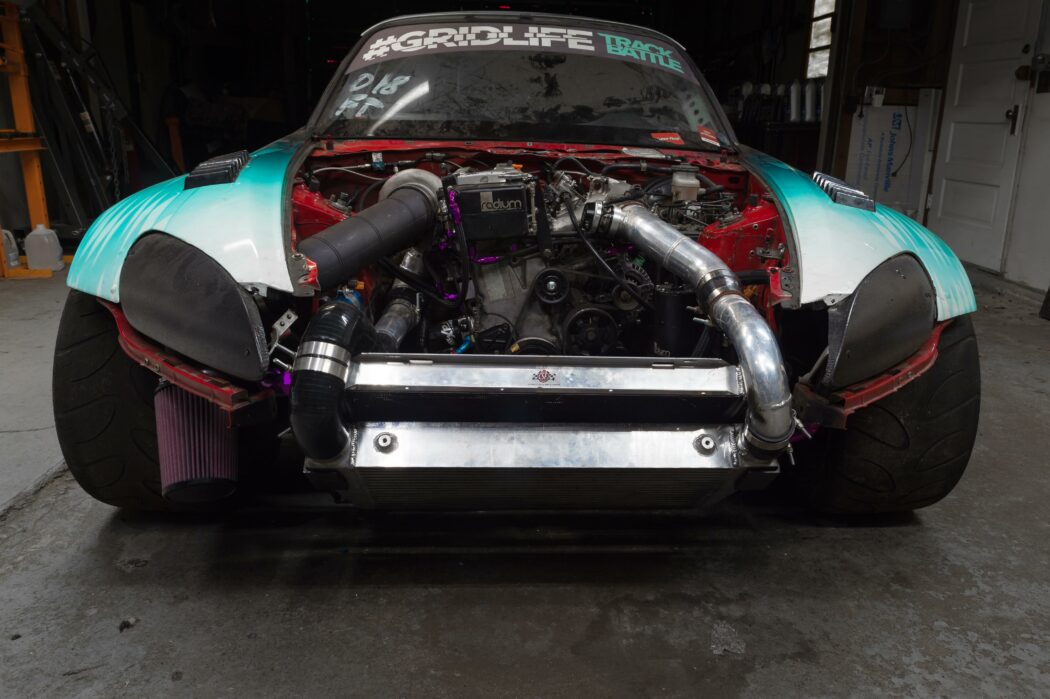 A little known fact is that your radiator is also a restriction that can cause back pressure on down-flow type radiators. Downflow radiators are what you typically see on most Japanese cars. Your radiator cap is at the top of the radiator and there are either plastic or metal tanks on the top that flow coolant down. This can cause back pressure because your engine is moving coolant at such a rapid rate in a motorsports application that having your radiator cap on the high-pressure side (the side that received coolant from the head) can actually lower the temperature the cooling system can hold. I did two things to minimize these effects. The first thing is I upgraded my radiator to a cross-flow radiator from CSF (note the end tanks on the sides). By upgrading this, it also allowed me to move my radiator cap to a different location which leads me to number 2. 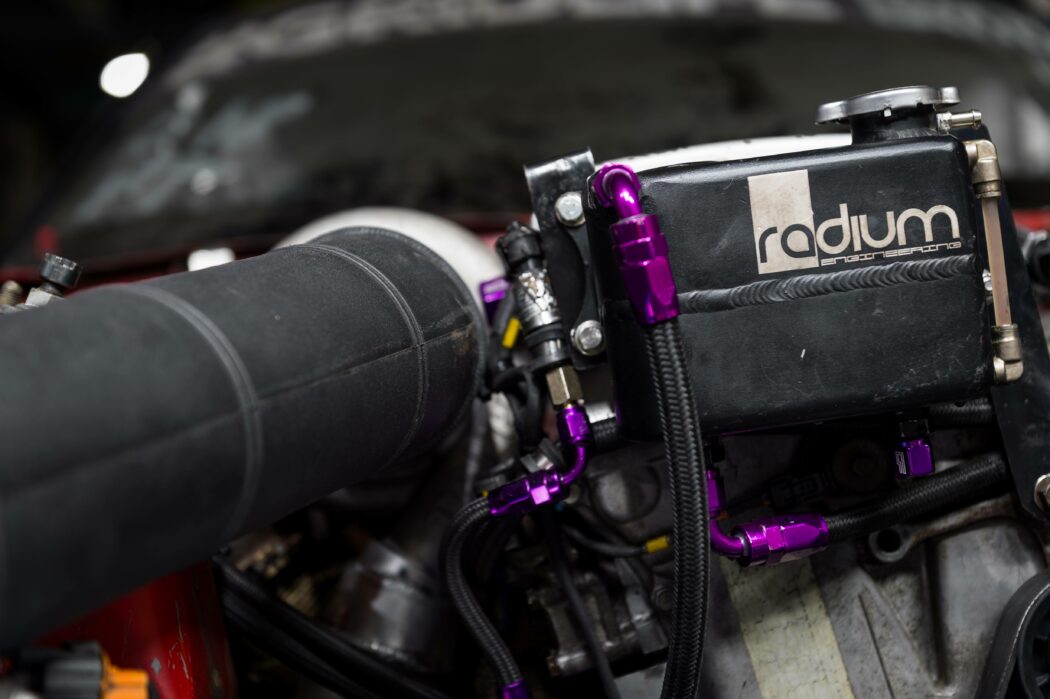 An expansion tank. I’ve been running this particular tank from Radium for years, it’s probably one of the OG parts on Sheri. It allows the heated coolant to expand without bleeding any of it into the atmosphere. This allows me to move my radiator cap to the expansion tank. When you do this, you have to make sure that it is the highest point in the cooling system. I know what you’re thinking, “Okay, so what does my Hyundai Tiburon have then?” Most cars have a traditional overflow setup. When the pressure in the cooling system gets higher than the radiator cap the coolant starts to expand and the radiator cap releases that extra pressure as steam that goes into your recovery tank. Once the pressure in the cooling system starts to contract it uses atmospheric pressure to vacuum it from the recovery tank back into the system. Fun fact, did you know that back in the day they used to just let the radiator vent to the ground with no recovery tank? People wonder how Global Warming happened so suddenly, sheesh. 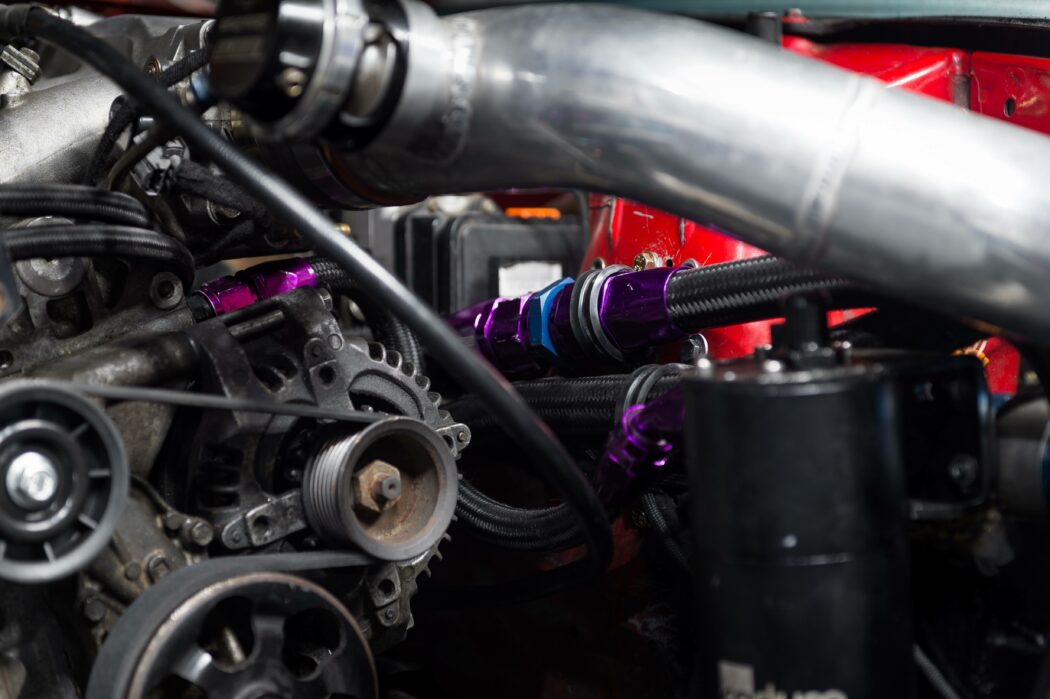 On to what an expansion tank means for a Motorsports application. It allows me to run a coolant system at a higher pressure. The higher pressure results in a higher boiling point for the water in the system. For example, at 1.1 bar or 15 PSIG (which is your typical aftermarket radiator cap) the boiling temperature of the water is 249.5 degrees F. If you were to double that to 2.2 bar or 30 PSIG (PSIG – measurement relative to ambient atmospheric pressure, 14.7 for atmospheric pressure is 0) it would be 274.1 degrees F . That’s a huge difference but with great power, comes great explosions. And with higher pressure come higher risk of things not staying together. Your end tanks, hoses, clamps, housings, etc may not be able to handle a 2.2 bar of pressure. That’s why I would stick to the rule of thumb and not go any higher than a 1.1 pressure cap unless you have pressure tested your system. My system is now tested to 1.5 bar (21 PSIG) and that raises my water boiling point to 260 degrees F. Not too shabby. 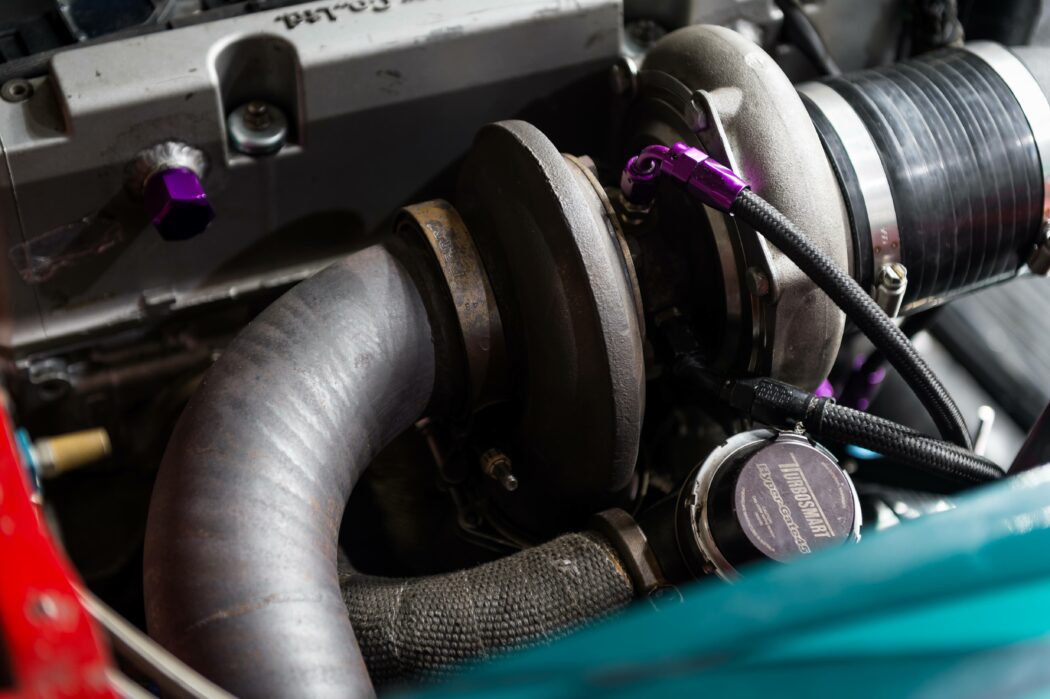 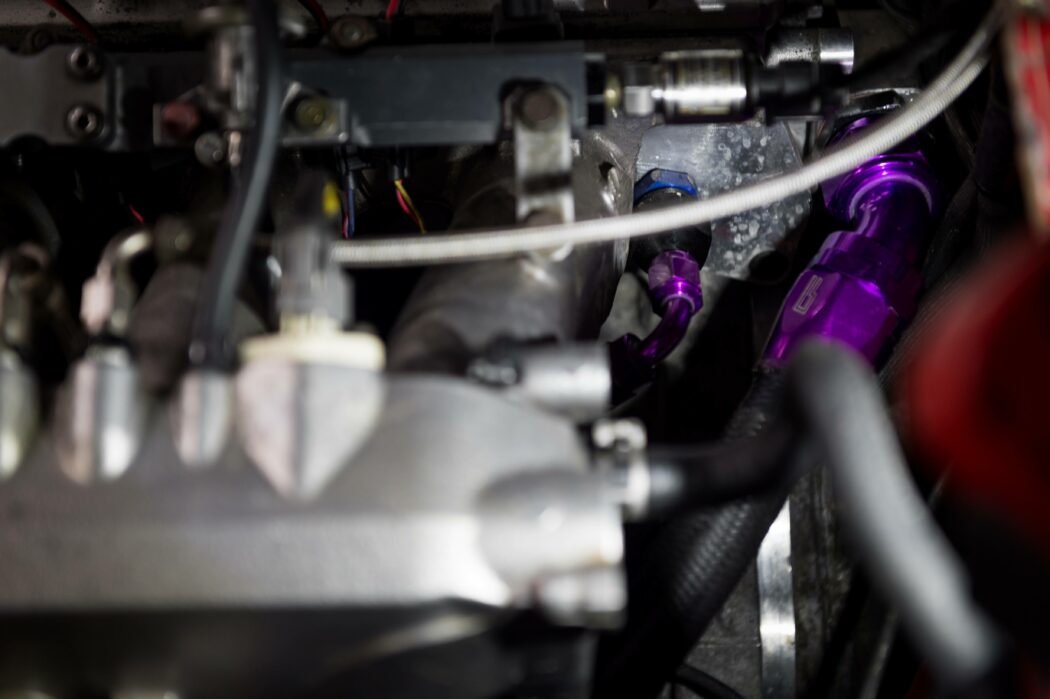 To wrap things up, you fill the system with distilled water and your choice of water additive. When running straight water you need to add an additive to stop rust corrosion that your typical 50/50 coolant provides. My personal favorite is Valvoline Pro- V. It comes in a big enough package that you don’t have to worry about running out and it seems to work just as well as any other additive. With that being said this will conclude system one. We learned a bit or you checked out after the first picture. So come join my Instagram polls on what we should go over next!

It’s been almost half a year since I last spoke with you all in S2000 Starts To Get Awesome. There has been a lot of downs with some ups, so…