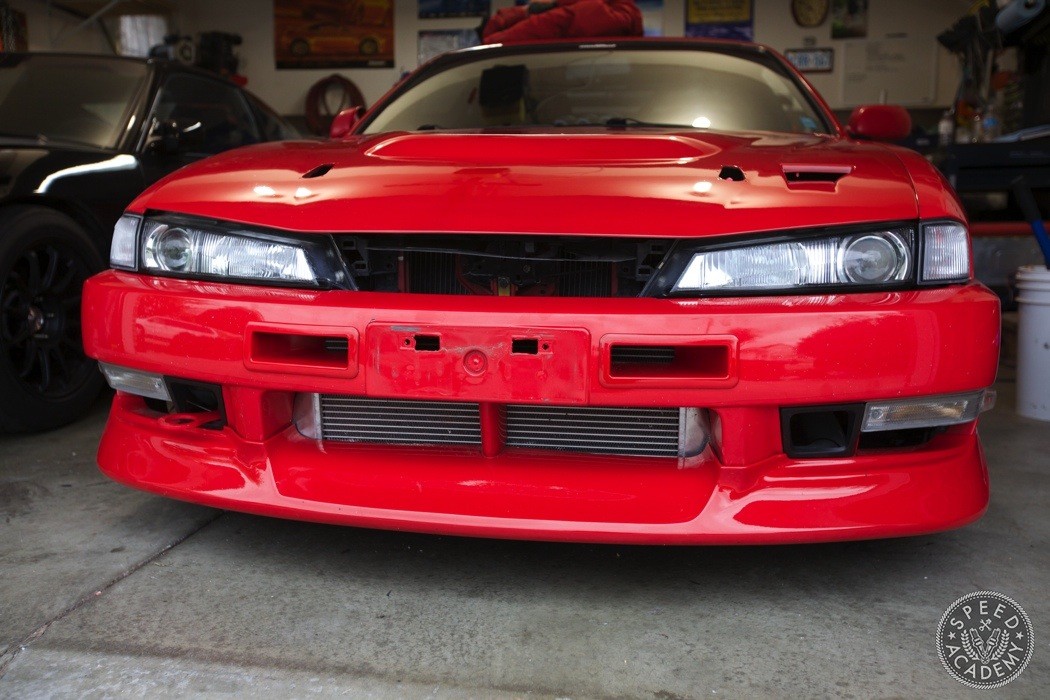 This simple yet relatively easy mod can help get some much needed added airflow to the intercooler on the S14. As many turbocharged 240 owners can attest, heat soak and overheating issues are a common problem at the race track. 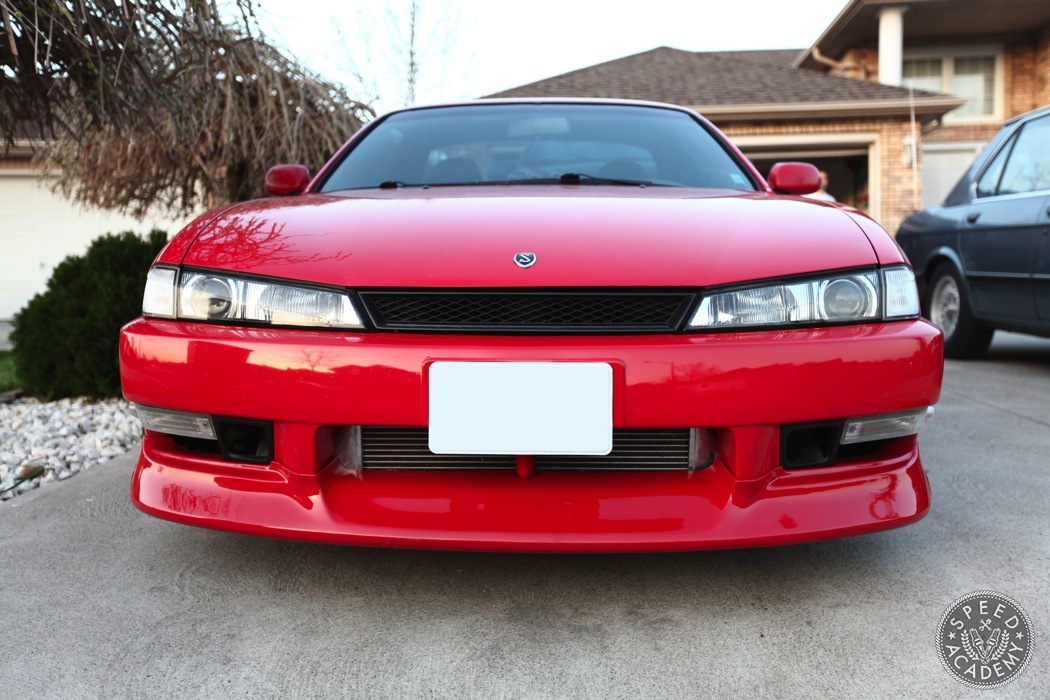 That’s because not only is the bumper opening relatively small but it pushes air through to about half of the intercooler. That leaves very little fresh air to get to the radiator. 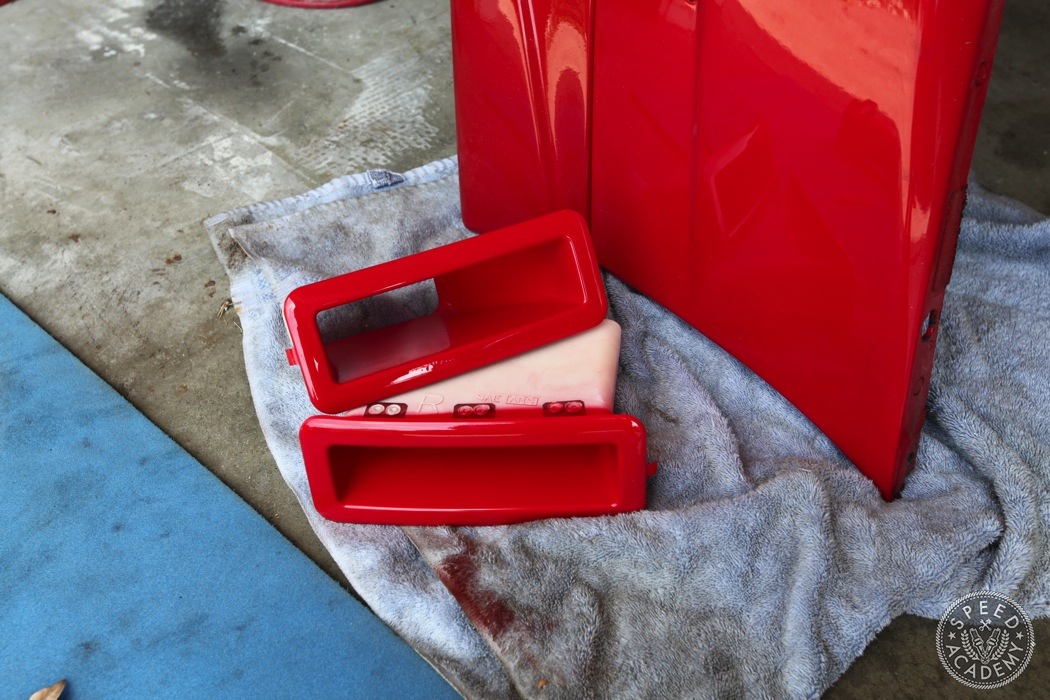 So any mod that adds air flow to either the intercooler or radiator is a welcome addition. Sure you could hack up your entire front bumper with speed holes but if you’ve got any respect for style and cleanliness then these Nissan Nismo N1 R33 bumper air ducts are the perfect fit for the job. 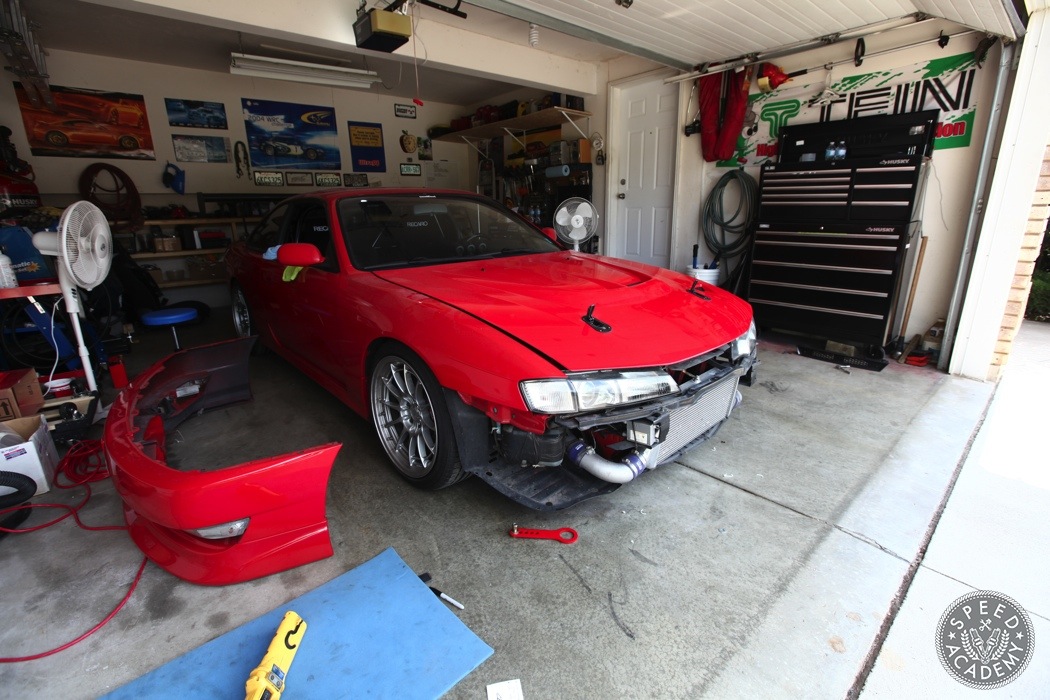 First things first though. The front bumper has to be removed, which should be an easy task for most of you since I don’t think I’ve met a 240 owner who hasn’t had his bumper off a million times. 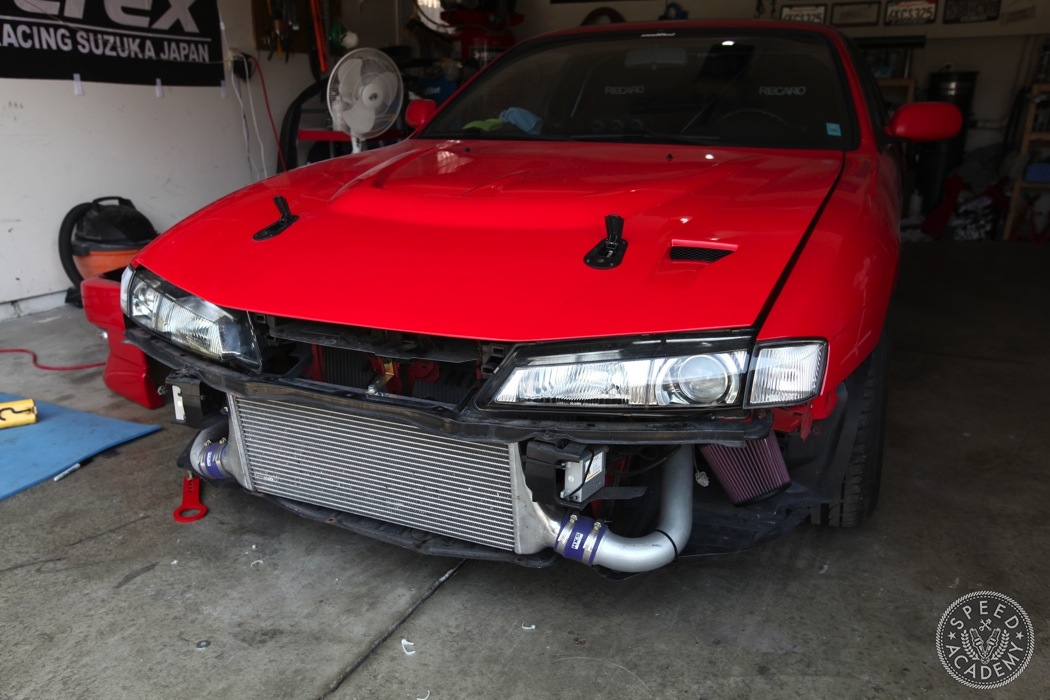 This image shows just how big the intercooler is so picture blocking the upper part off with the bumper and it’s efficiency is no where near its real potential. 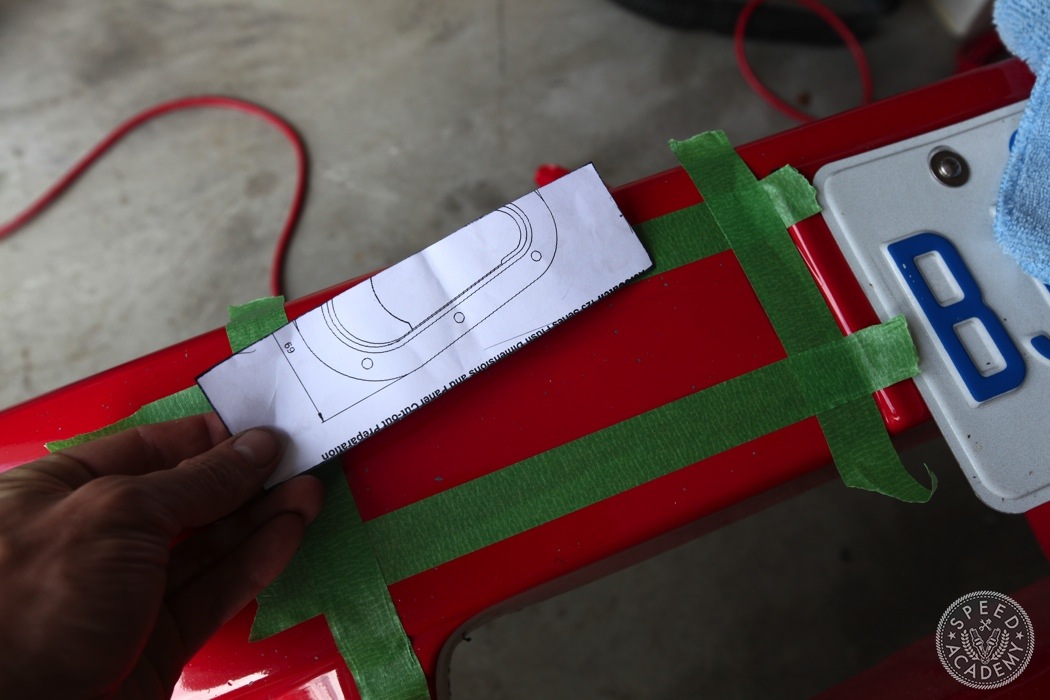 As I mentioned this job is as simple as cutting two holes in the bumper. However, the most critical part is to get them cut to the right size so that the ducts will snuggly fit in place. The way I went about this is I measured the inside of the duct opening and added 5mm to each side to compensate for the molding. It’s always better to have it too small and open the hole up afterwards then make it too big at which point you’re sailing down shit creek. 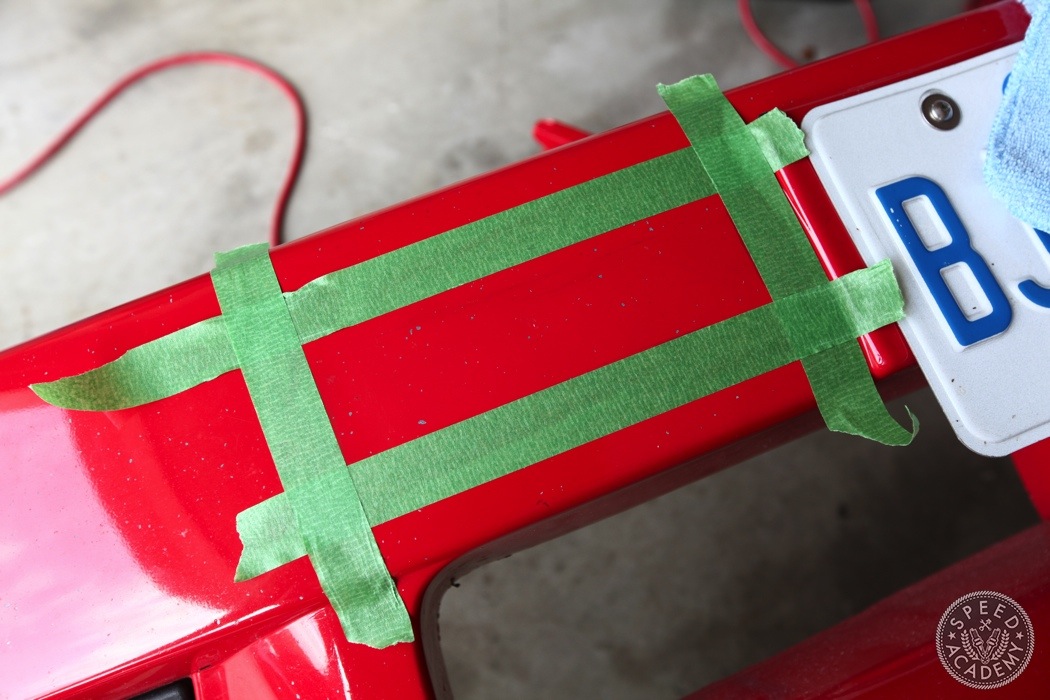 As for where to place the ducts, around an inch from the plate frame seemed like a good idea. Too much further away and the duct will push air onto the IC end tank rather then the fins. 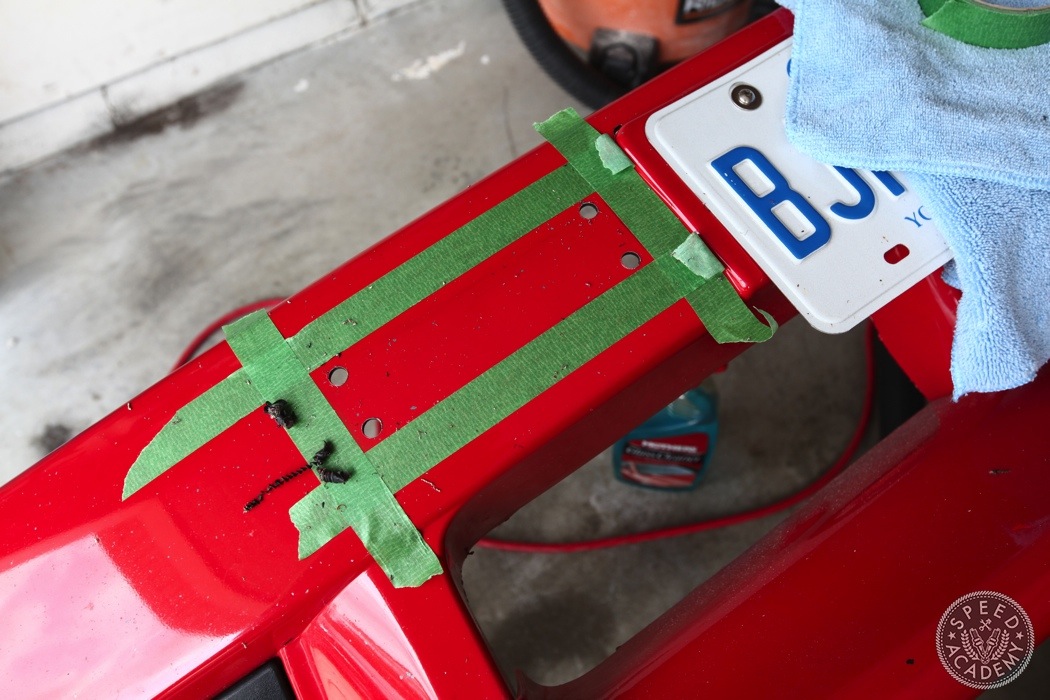 Now it’s just a matter of going for it and cutting the bumper. Start off with drilling some holes if you’ll be using an air saw. Otherwise a grinder can make easy work of plastic but remember its melting it not cutting so account for that when you’re close to the edge as it builds up hot plastic that can stick to the paint and tear it off afterwards. 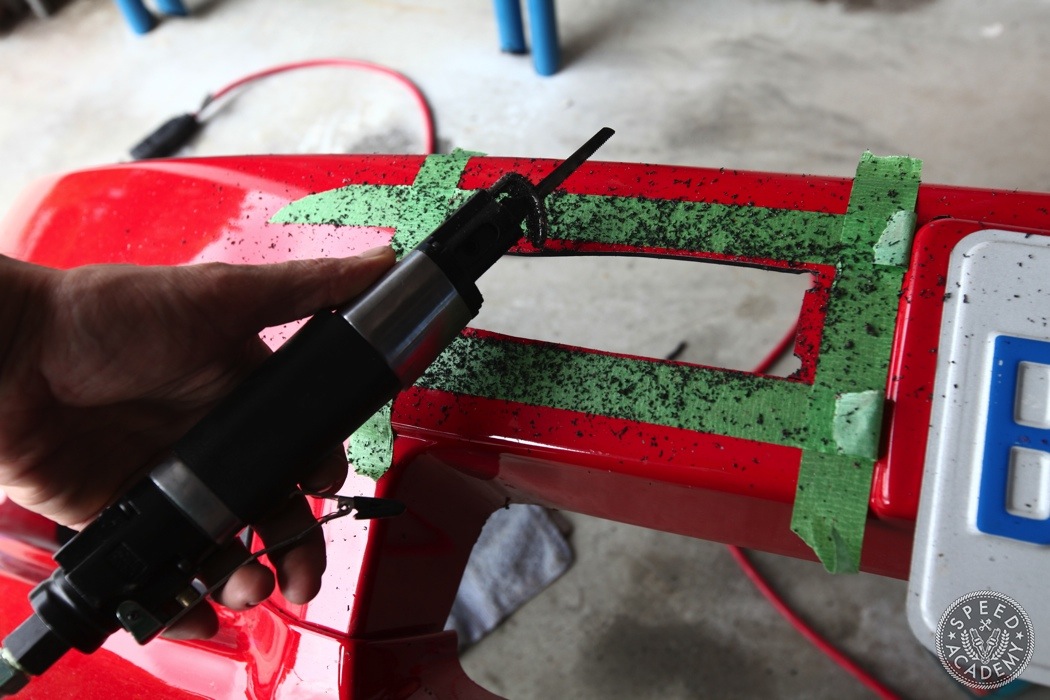 I came in with an air saw and cut the center section out making sure to leave a good amount of buffer room. 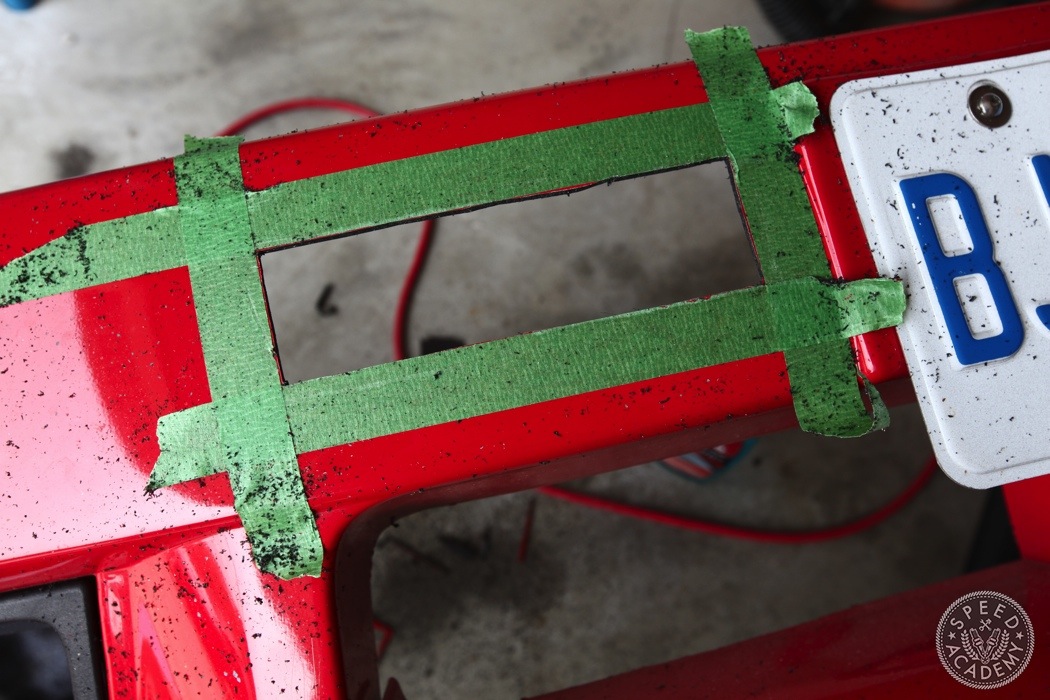 With some more trimming and filing I got the hole shaped to where I thought the duct would fit. 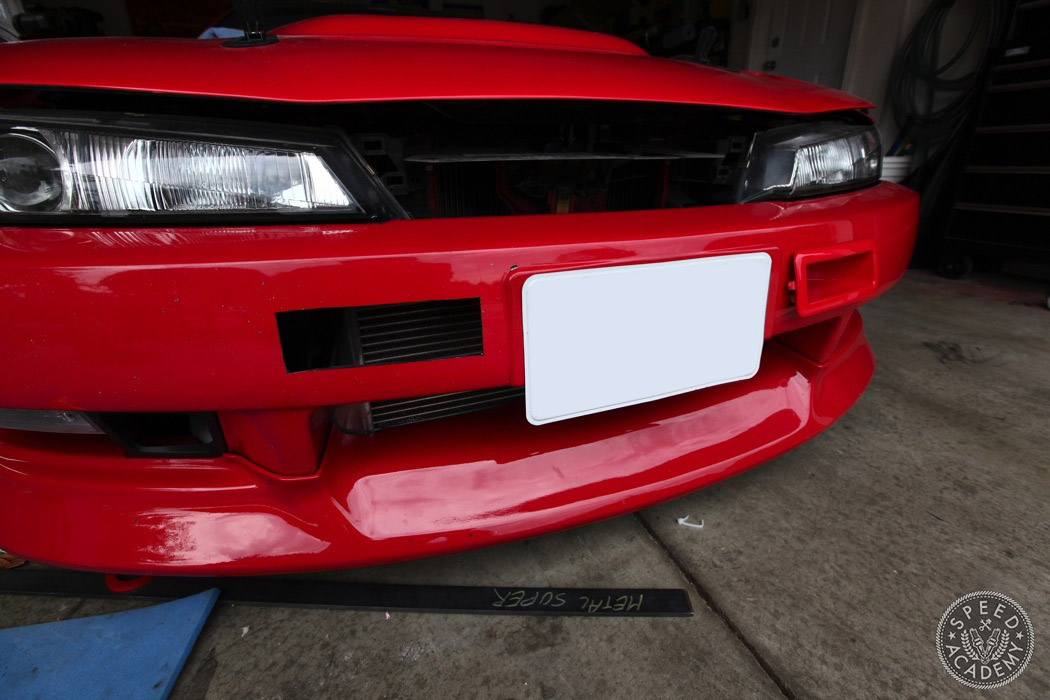 I hung the bumper on the car and checked fitment on the N1 ducts. 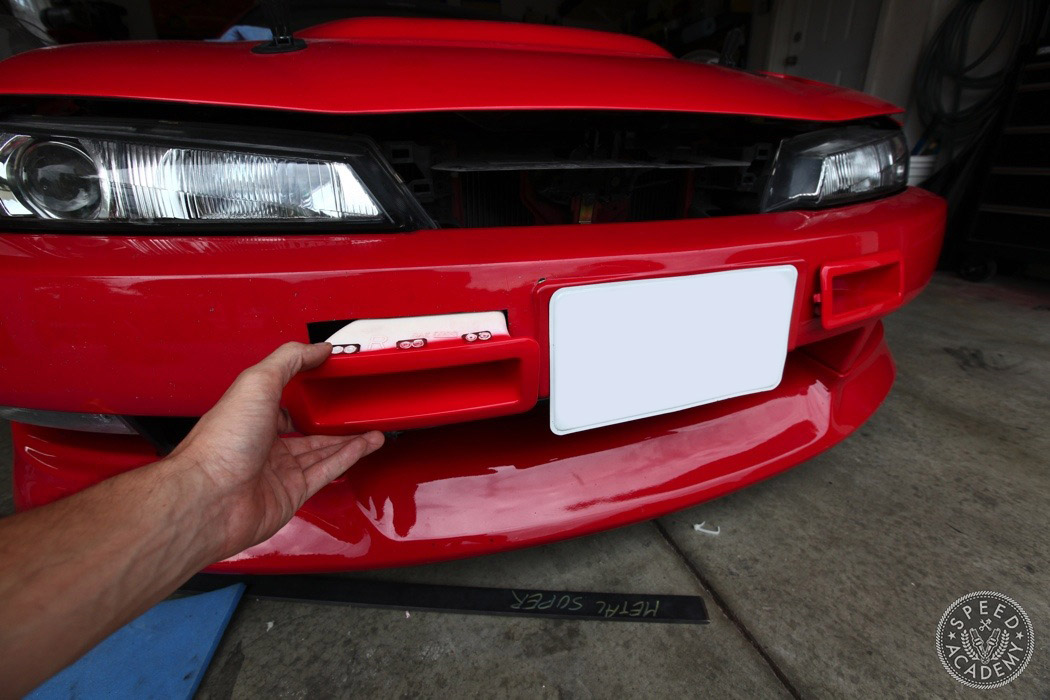 Thankfully, the hole I cut was the right size and the duct slid into place with ease. However, I didn’t pop them into place yet. 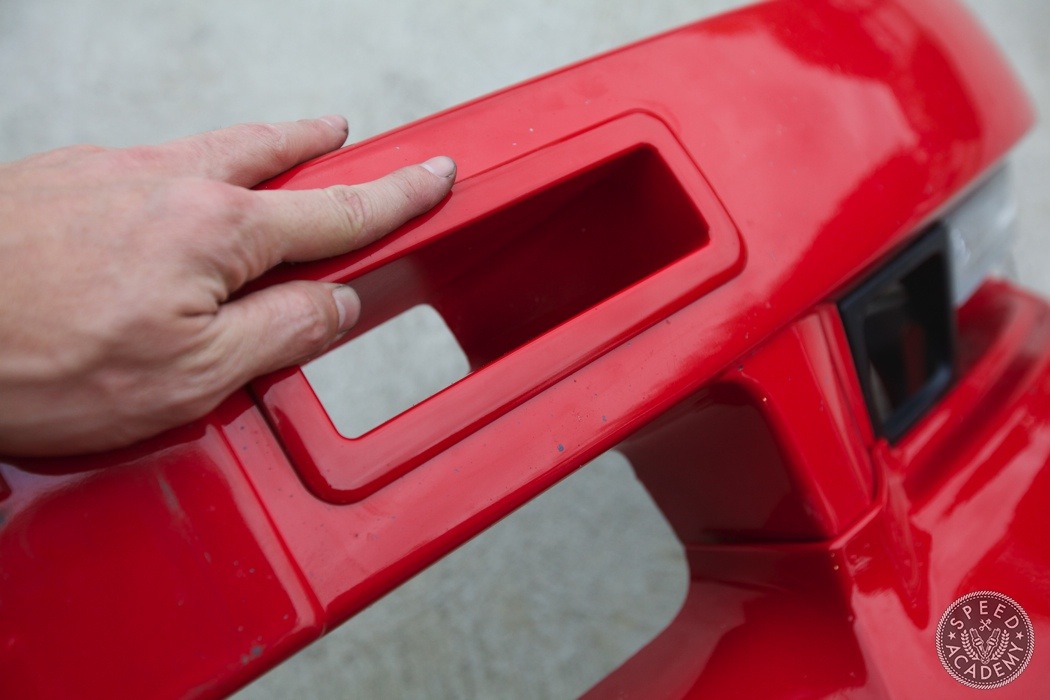 The bumper came off again and that’s when I proceeded to permanently mount the air ducts. They use double sided tape and… 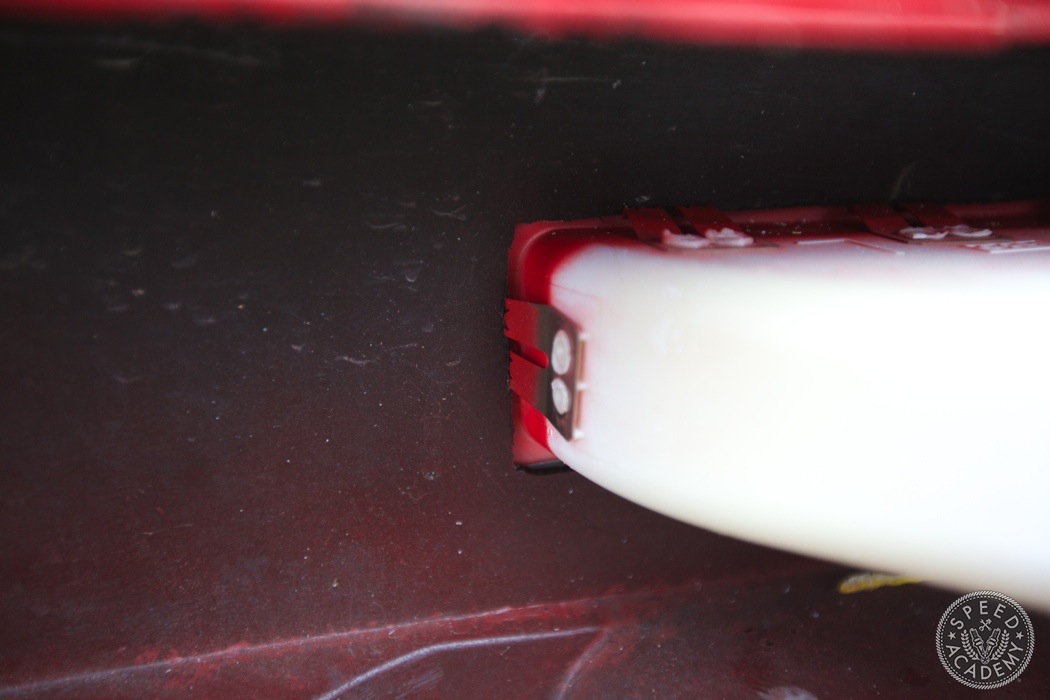 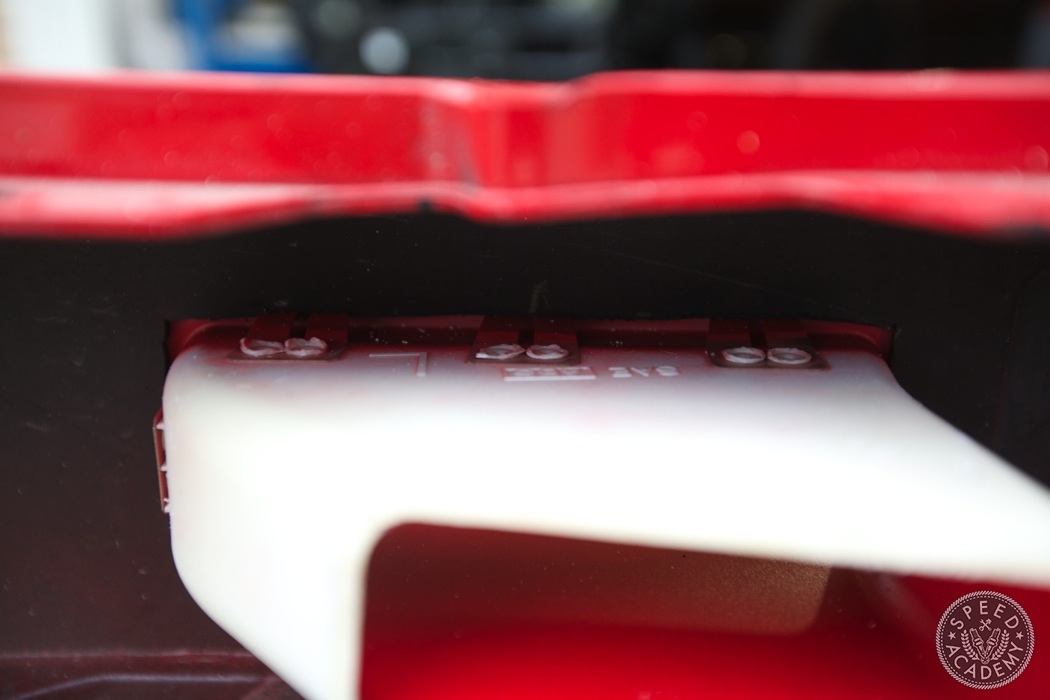 tabs to hold them in place. If you’ve left the right amount of buffer in the opening the ducts will mount firmly with very little wiggle to them. 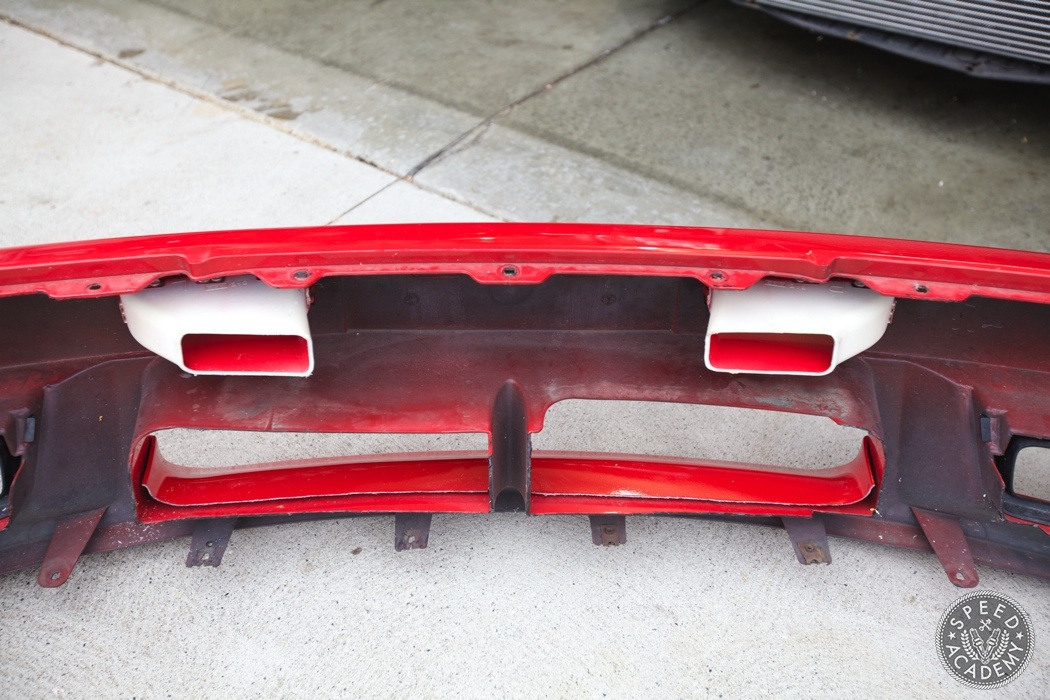 Here’s what the final result looks like from inside the bumper. I know what you may be thinking, that’s not a lot of extra airflow through those two holes but if Nissan engineers used these on the N1 R33 Nismo, a track bred machine, then they have to provide a significant bump in air flow. 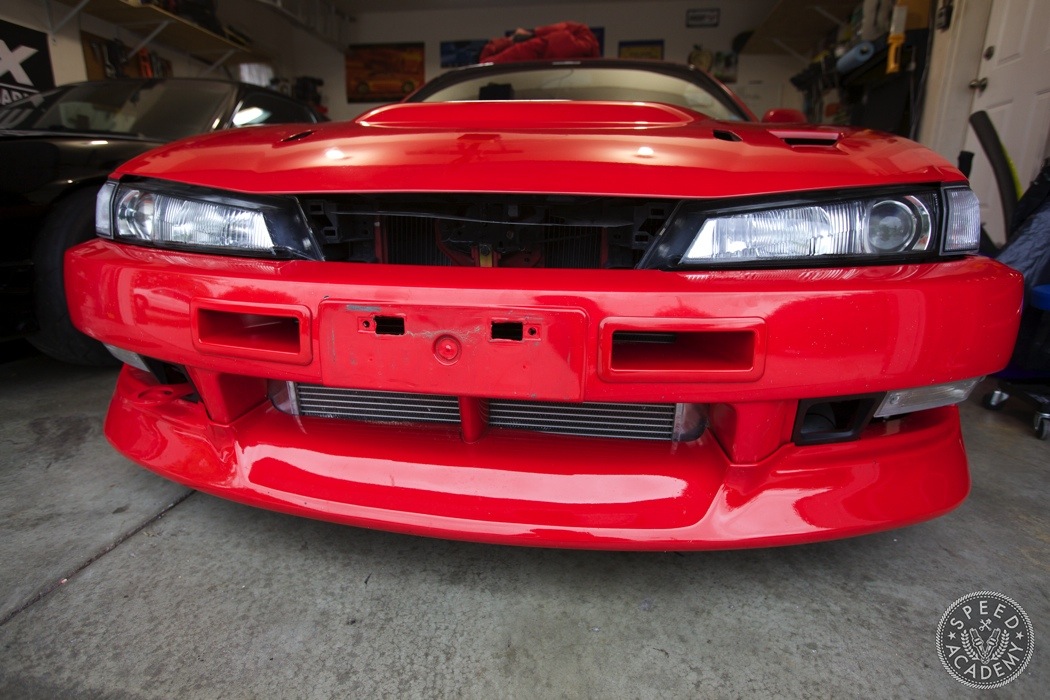 With the bumper back on and buttoned up, I have to admit I really like the look of the air ducts. They definitely add a more aggressive element to the style. 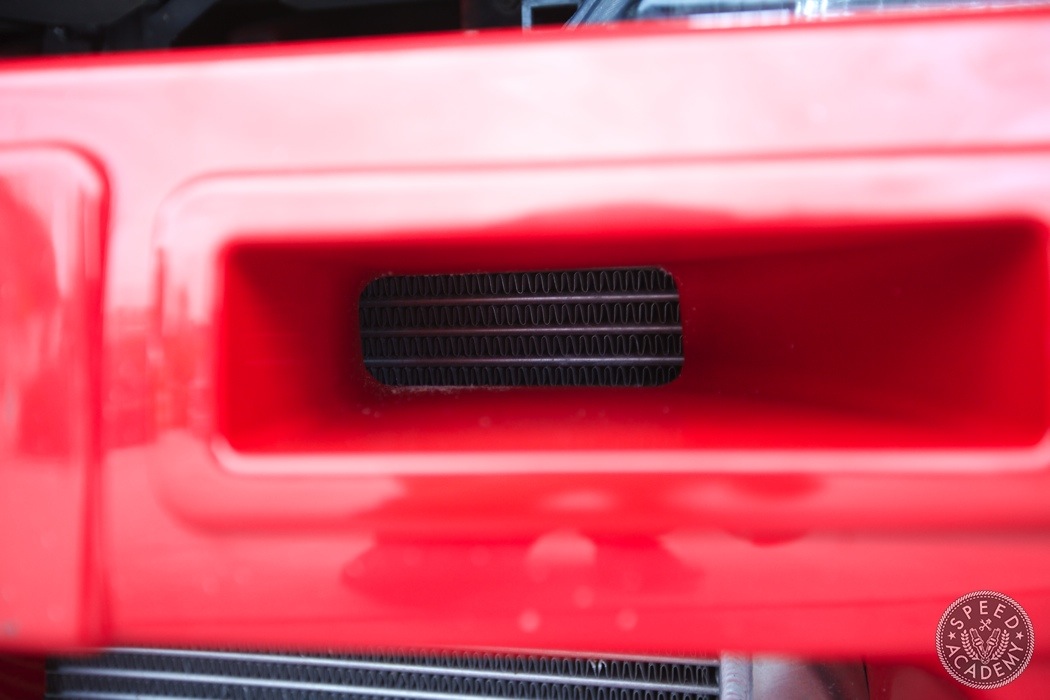 And unlike most vents or ducts you see on cars, these are actually functional! 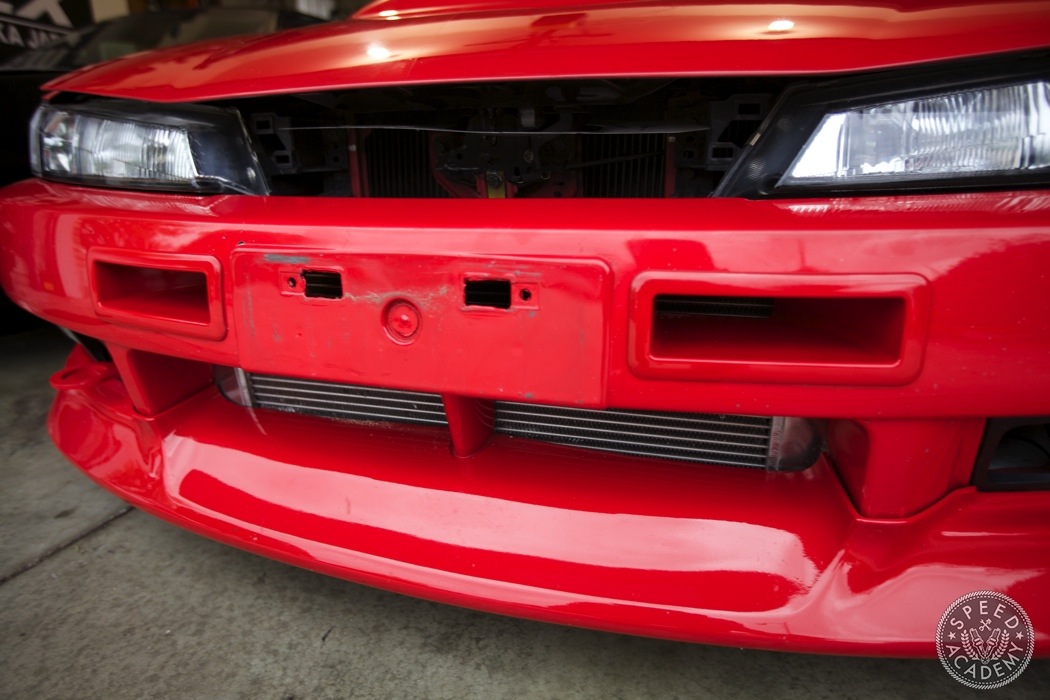 If you end up doing this mod and still experience overheating or high intake temps then there’s always the option of cutting out the center section where the license plate frame goes. I actually did this on my previous 240 with good results but it’s not as clean as the ducts so I’ll see how well these work and if need be I may end up doing that mod as well.

Appreciate this info as I am about to install these on my S13. Making it look easy!