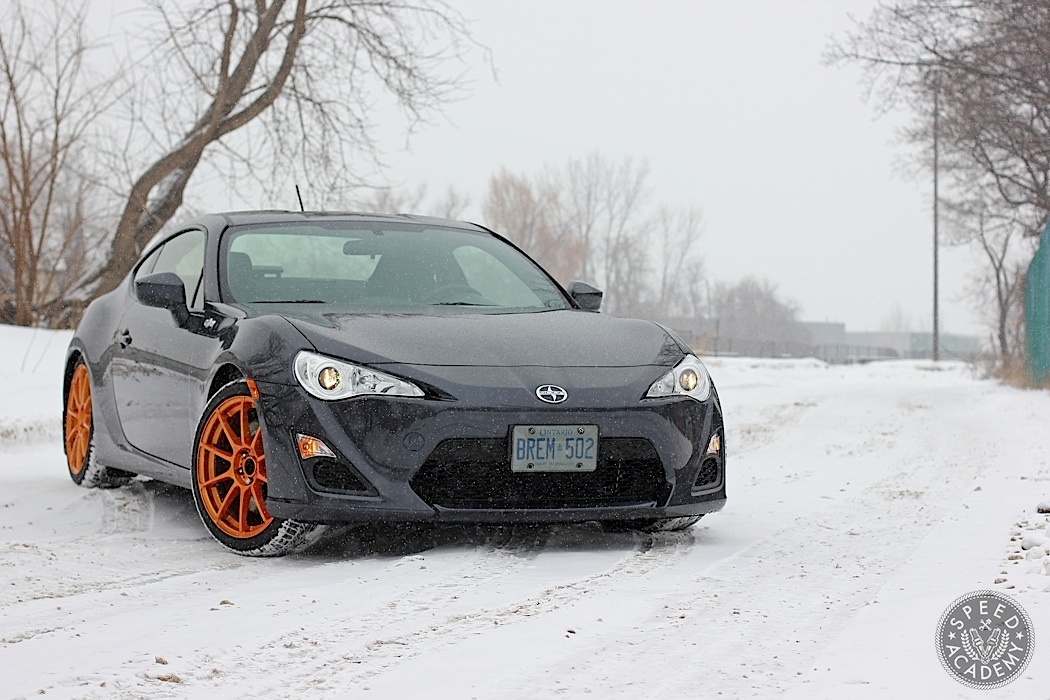 Winter’s coming. And not in that cool ‘Game of Thrones’ kind of way, either. Nope, it’s the fun-sucking, sub-freezing temperature type of winter that’s coming for us poor schmucks who live in the northern half of the northern hemisphere (or for you even poorer schmucks who live far enough south in the southern hemisphere). If you’re anything like us, then at some point you’ve been faced with the conundrum of how to make it through the winter while still being able to feed your need for fun on four wheels. 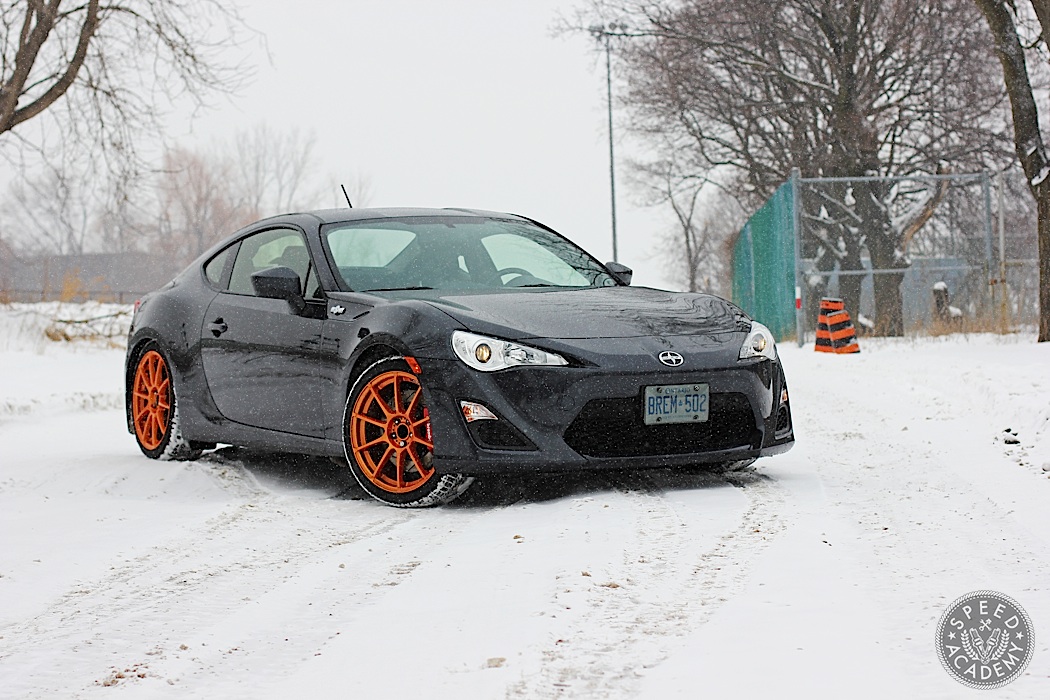 For some of us, that means dusting off that bastard stepchild known as ‘the winter beater’, a rusty pile of scrap some folks still consider a car. But what if you’re not that keen on driving a death trap or looking like the automotive equivalent of a hobo? Or what if you just can’t stand to banish your finally tuned sports coupe to the depths of the garage for a few months? That’s exactly the dilemma our friend Mike was facing back in January, since his Scion FR-S is his only car and is just way too much fun to even consider putting away for the winter. 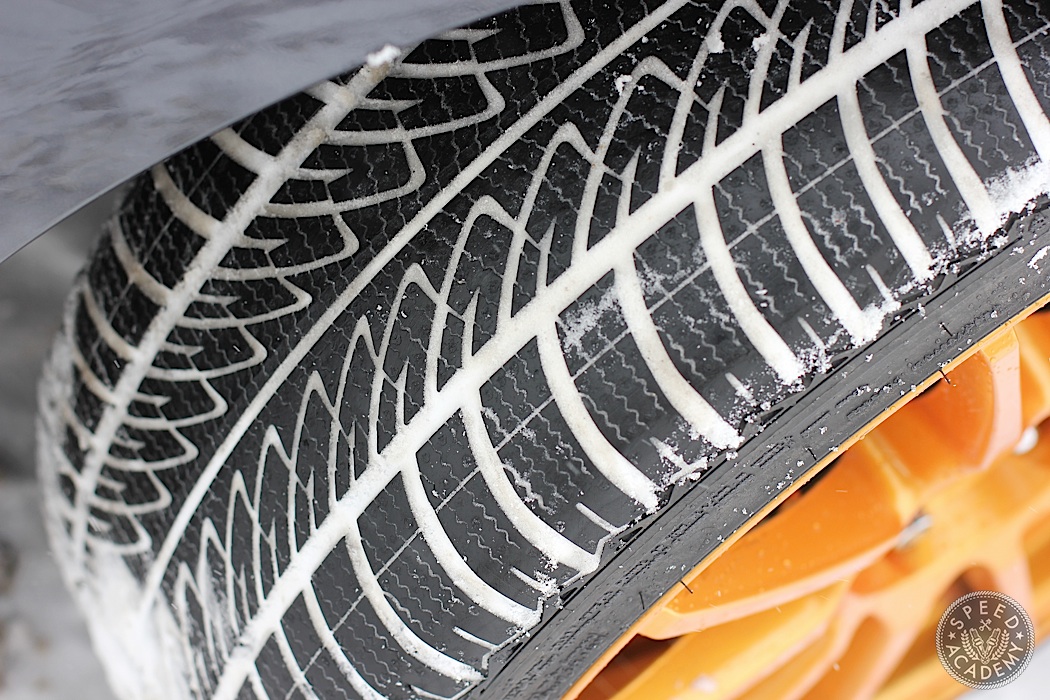 Mike wanted a winter tire that would get him safely through the worst a Toronto winter could throw at him and his brand new FR-S (which we’ve featured here in our Track Prep Basics and Corsa Exhaust stories), but would also be fun to drive on when the roads are dry. In the end he settled on Goodyear’s Ultra Grip 8 Performance, a new offering from Goodyear that was developed in Europe, where drivers take winter conditions very seriously but don’t want their tires to completely kill the fun or ruin fuel economy.

Keep in mind, winter tires like these have a special silica tread compound designed to maintain elasticity and provide consistent grip at very low temperatures.Generally speaking, tire industry experts recommend swapping on your winter tires when ambient temperatures drop below 7-degrees Celsius, the point at which non-winter tire compounds start to lose their elasticity and thus ability to grip the road surface. And as you can see from the picture above, a lot of effort goes into designing the tread pattern and siping on a high performance winter tire like these. Goodyear has designed the UltraGrip 8 to have superior grip and braking on hard-packed snow by using three different types of sipes, plus the saw-shaped central rib works like a snowplow, grabbing onto surface snow for extra traction.

We asked Goodyear for some feedback on how winter tires work and at what temperature they recommend switching to a winter tire and here’s what they said:

“The compound stiffness at subzero temperatures is driven by how close the compound is to a certain state which is called Tg (glass transition temperature). This is a state in which the compound becomes very stiff, like glass. This is a gradual process, and the closer you get to it, the stiffer the compound. In compounds for winter tires, the raw materials (mainly the polymers) are selected so they have Tg far below operating temperatures (even down to -100 C). Winter tires, also known as snow tires, are designed to help provide enhanced traction once the temperature drops below 45Fº/7.2Cº.” 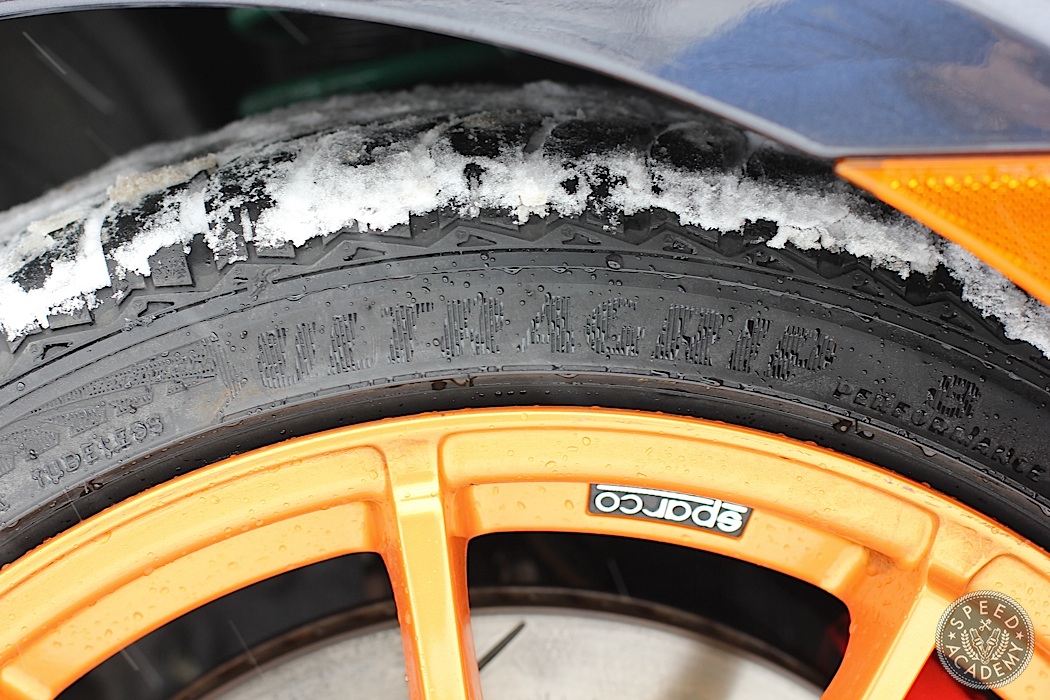 The Ultra Grip 8 Performance lives up to its name, providing aggressive levels of grip and turn-in response in all types of winter conditions, allowing us driving enthusiast types to enjoy a spirited drive even when Mother Nature is doing her best to kill the fun.

Ordered in a 225/40R18, Mike was a little worried that going from a wide, sticky summer tire (Dunlop Direzza ZII in a 255/350R18) to a narrower winter tire would result in an underwhelming performance experience, but from the second the tires were mounted up, it was clear that none of the characteristics that make the FR-S so enjoyable to drive were dulled in any way by this new seasonal setup. In fact, Mike recently told us that the car is actually more fun on a narrower tire, since it’s more willing to rotate. And what FR-S owner doesn’t want to hang the tail end out a bit, right?

The roads were dry and clear when we first tested them, and our initial impressions were very positive. The grip available under throttle and during cornering was more than enough to enjoy the limits of the FR-S in sub-zero conditions, with a stiff enough sidewall for the tires to feel responsive under both lateral and longitudinal loads. You can definitely feel the UltraGrip 8’s unique silica blend generating surprising grip for the conditions without any of the vagueness or squishiness that’s commonly the case with winter tires. Simply put, the FR-S felt solid and planted in dry, cold conditions.

It wasn’t long before we had the first of many snowfalls to test the limit of slip and grip on these Goodyears. In fact, this past winter was one of the snowiest on record in our area, so we tested the Ultra Grip 8 Performance out in light snow, heavy snow, deep snow, slush, ice and everything in between, and we always felt confident behind the wheel of this agile little rear-wheel drive sports coupe. In fact, winter has never been more fun.

When we asked Goodyear how this tire was generating grip, they added this:

“The grip of a winter tire is generated by all elements specific to winter tires, both tread pattern and compound. The compound is selected in such a way that this tread design is always flexible and can adapt to the surface. They truly work together.” 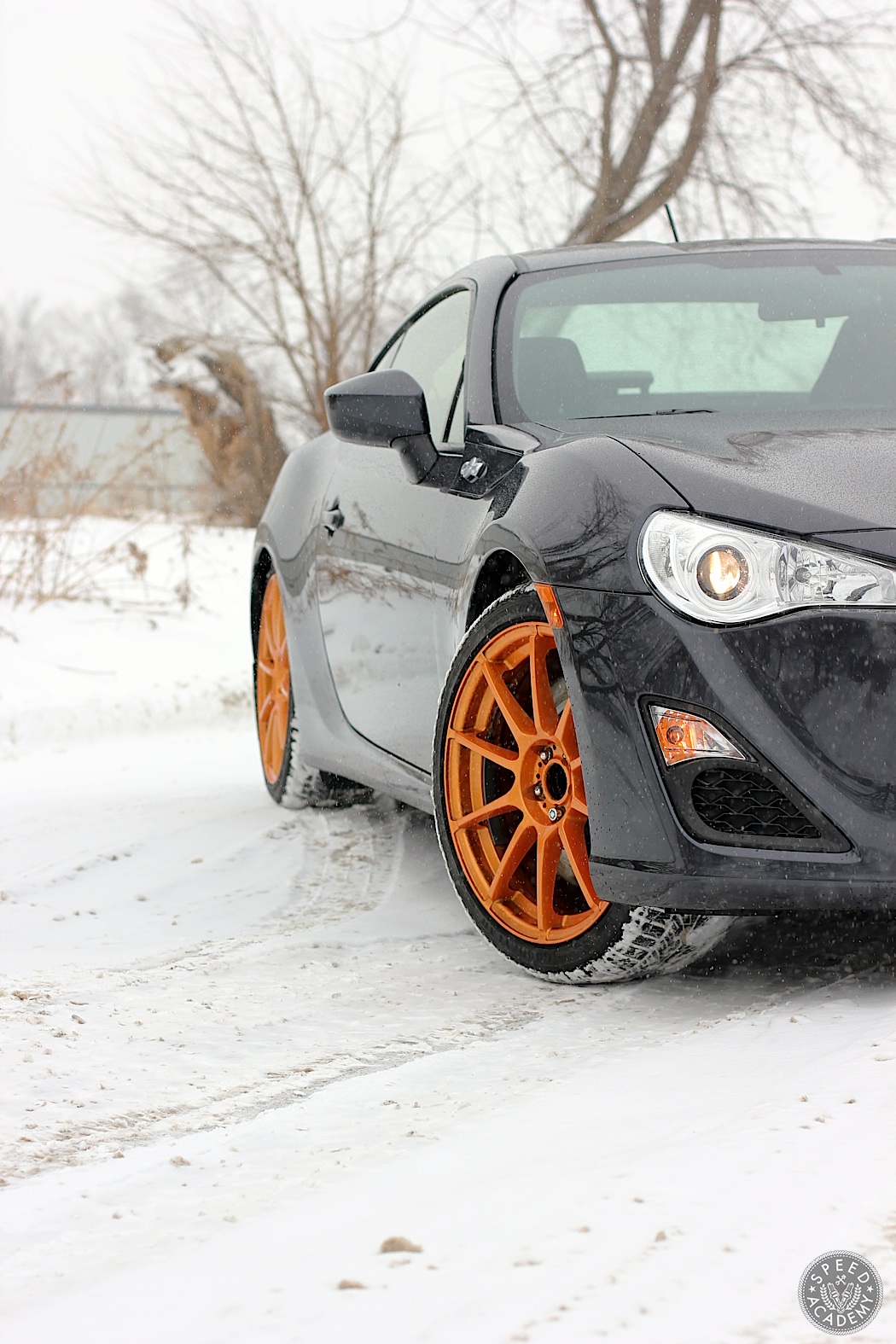 Part of the fun comes form the fact that the FR-S is equipped with a very capable traction control system, complete with a Sport mode, so the car works very well in the snow with it on. Turn Traction Control off, though (not recommended for newbs), and suddenly you can do effortless drifts on snow-covered surfaces, easily controllable thanks to the fantastic balance of the FR-S and the progressive breakaway characteristics of these Goodyears. We also surprised ourselves on several occasions, where we thought adding throttle would result in more rear slip and a bigger drift, but instead the car just hunkered down as the Ultra Grip 8 Performance tread compound dug into the slick road surface. Through slush and standing water the directional tread pattern on the Ultra Grip 8 also did a great job keeping the FR-S tracking straight.

We asked Goodyear for some added insight on the Ultra Grip 8 Performance in particular, to which they offered:

“The performance of tires (any kind) is a compromise between contradicting characteristics. In a Winter HP tire, such as the Goodyear UltraGrip 8 Performance, a little more emphasis has been put to the dry handling and high-speed characteristics. Product development engineers always want to expand the total performance envelope with the help of new compounds or new design features. As a very simple design rule, you know the closer to the road contact, the more important it is for the level of the performance of the tire. For example, the tread is much more important than the sidewall for performance, such as braking/acceleration/handling, versus the aesthetics.

When it comes to sportiness, especially high-speed characteristics, the stability of the crown (belt and overlays) is a key item. They are involved with transferring the maximum forces.” 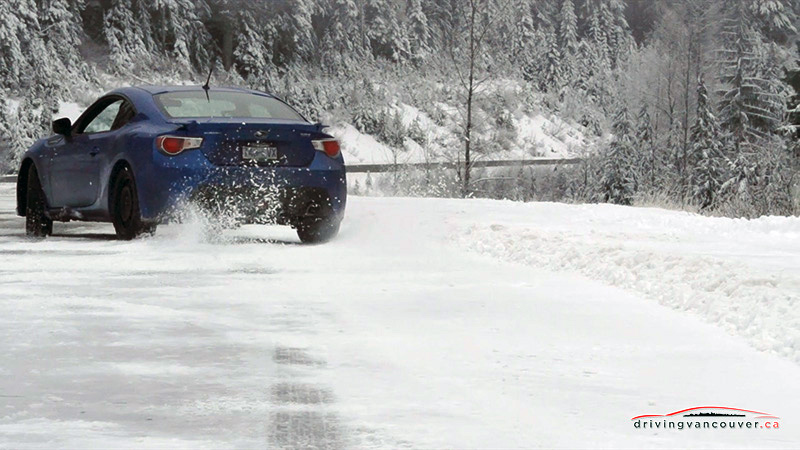 All in all, we were extremely impressed by Goodyear’s new ultra high performance winter tire, since they allowed Mike to keep his FR-S on the road and enjoying it in winter mode in a way that would make Pat Cyr proud. So if you’re on the fence about submitting your RWD sports coupe to the slush, snow and road grim that comes with winter driving, please consider saving yourself the embarrassment of driving around in some god awful winter beater and instead spend your money on a high performance set of winter tires like these Goodyears. We’re willing to bet you’ll find excuses to go driving in the winter if you do, but do keep in mind that you’re driving on a lower grip surface in the winter, especially if there’s any snow, slush, ice or standing water, so don’t expect r-compound on a hot summer’s day grip levels regardless of your choice of rubber.

You will be blown away by the grip a winter tire can generate, though, especially if you’ve been one of those stubborn all-season tire users until now. And not just on snow or ice, but on dry roads too, because winter tire compounds are developed to stay elastic (and thus generate grip) even at sub-zero temperatures. It’s not just about the tread pattern or tread depth, the compound is a huge contributor to why winter tires shorten stopping distances, improve acceleration, and improve grip in all directions when the temperatures start to drop, so don’t make the mistake of thinking your all-season rubber is truly up to snuff when the needle starts to dip below zero.

Next up, we’re going to do some stopping distance, standing start acceleration, and figure-8 grip tests using a winter tire vs an all-season tire. Look for a video and story with in-car data soon!