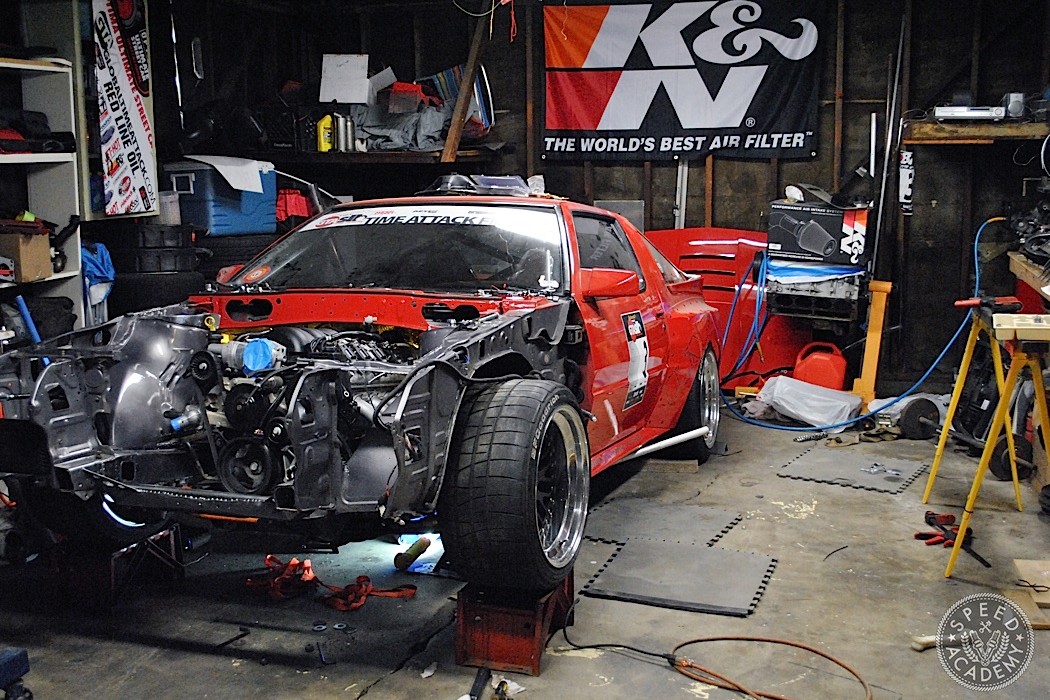 As you may recall, we ran a story last year on John Lazorack‘s amazing ’88 Chrysler Conquest and the custom widebody fenders he designed and built for it. Prior to that we featured John’s Conquest in Modified Mag and invited him out to the mag’s annual Tuner Shootout. We’re huge fans of his DIY approach to every aspect of this car’s continuing evolution, so we’re going to run updates on its progress whenever John has time to send us some pics and a bit of a rundown on his latest set of upgrades. 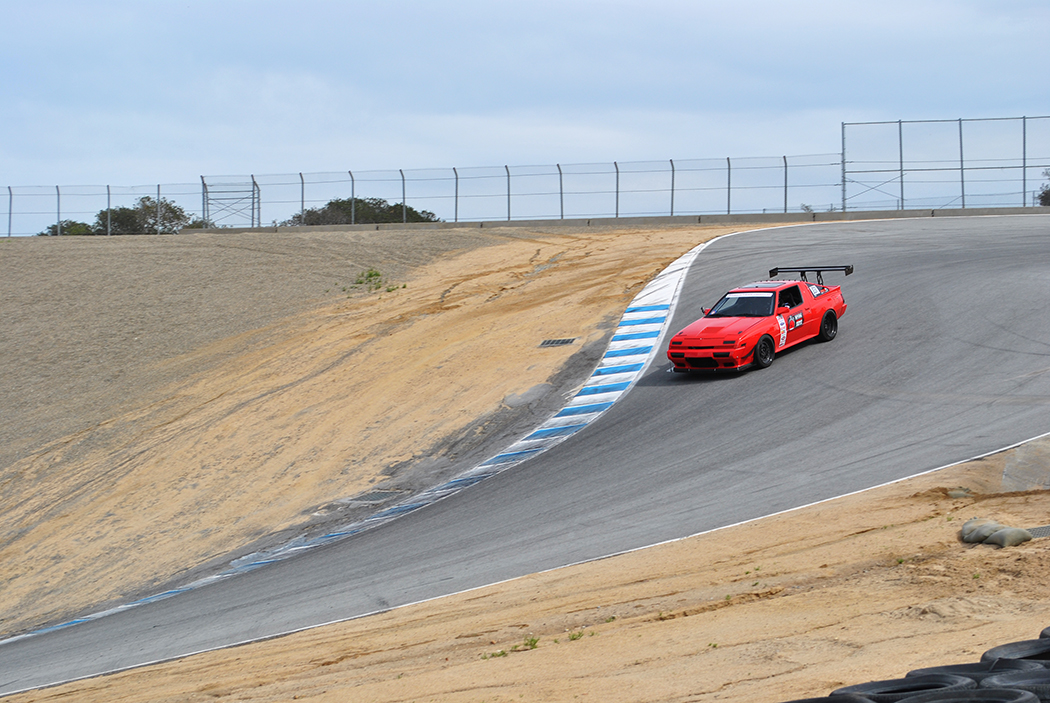 John’s focused on Time Attack and the Optima Battery Ultimate Street Car Challenge these days (though he’s also done tons of drifting and autocrossing), and one thing he learned while competing in the USCA last year is that he needed more power to run with the big dogs. His tried and true LS1 swap, done in his driveway in Detroit (he now lives in SoCal) had served him well but it was time for a refresh and a boost in power output. 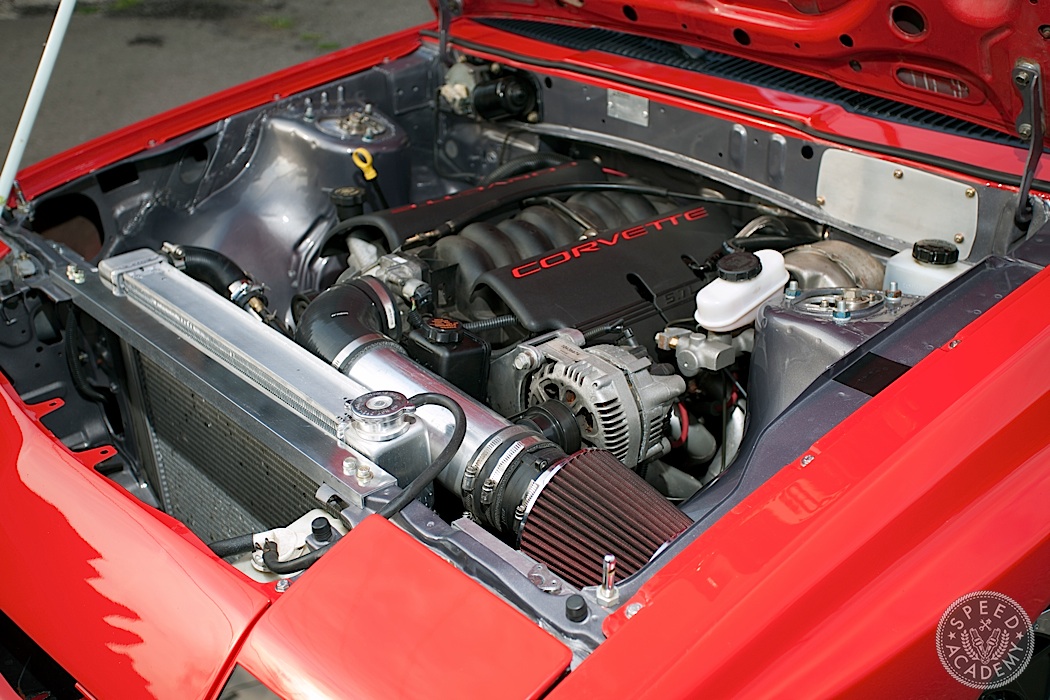 This meant stepping up to a LS3, but first John needed to pull the LS1 and tear it down in order to use a few parts off it for the swap. As he explained, “I noticed that at some point in its life the LS1’s valves had become intimate with its pistons. While the power felt the same, there was no point in building up a motor that was on its way out. To Craigslist I went. I found a 16k mile ls3/tr6060 combo a few hours from home and made a trip to take a look at it. Before I knew it, my Chevy Tahoe now had 2 engines and transmissions in it!” 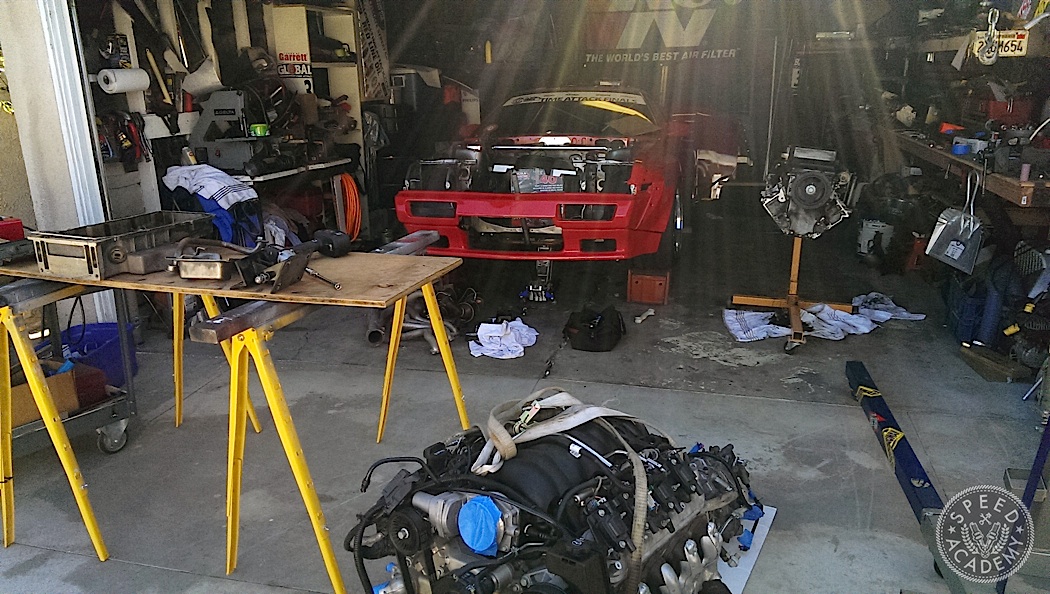 Since John has already built custom LS mounts for his Conquest, you might assume the LS3 would bolt right in there, but you’d be wrong. Kinda-sorta. As John put it, ” The engines are basically the same on the outside for the most part, but the accessories are in different locations. A few quick measurements showed that everything would clear, but I’d have to swap the oil pan from the LS1 to the LS3. Nice knowing that the pan from a 1998 bolts up to an engine 12 years newer. Say what you will about American engineering, but its fantastic when it comes to stuff like this.” 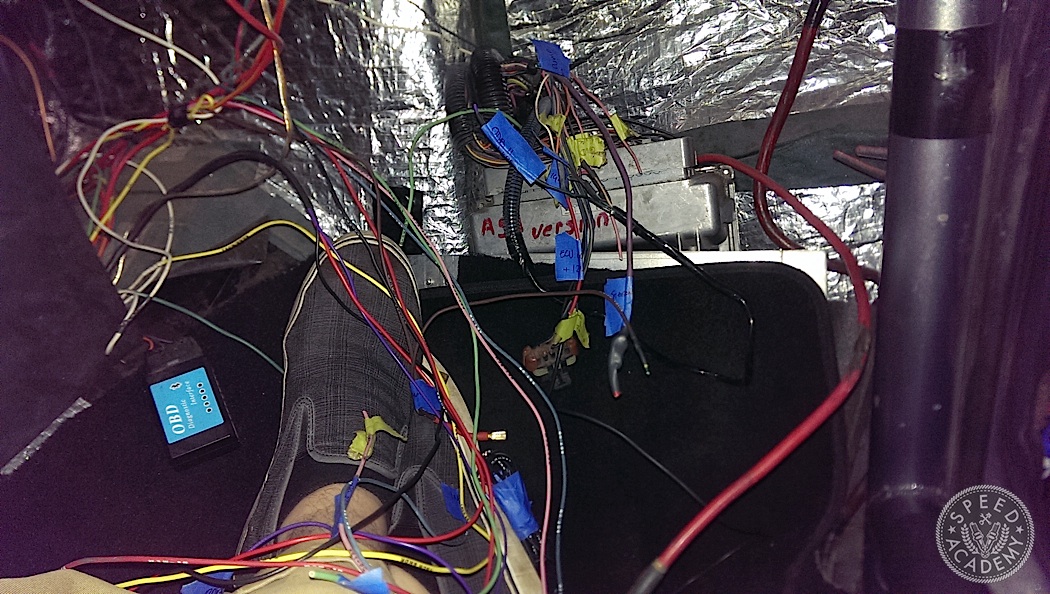 Normally John would have made the LS1 wiring harness work on the LS3, but because he was thrashing hard to get ready for the first USCA event at Thunderhill Raceway at the end of February, he decided to go to the aftermarket for a little help. “I called up PSI Conversion and ordered a standalone LS3 harness along with a preprogrammed PCM. This was a fairly simple plug and play setup, minus the starting and charging system, which I was able to piece together from the old harness. Huge wires going to the starter and the alternator had to be tucked and wrapped to prevent being melted by the hot exhaust headers, but other than that it was smooth sailing.” 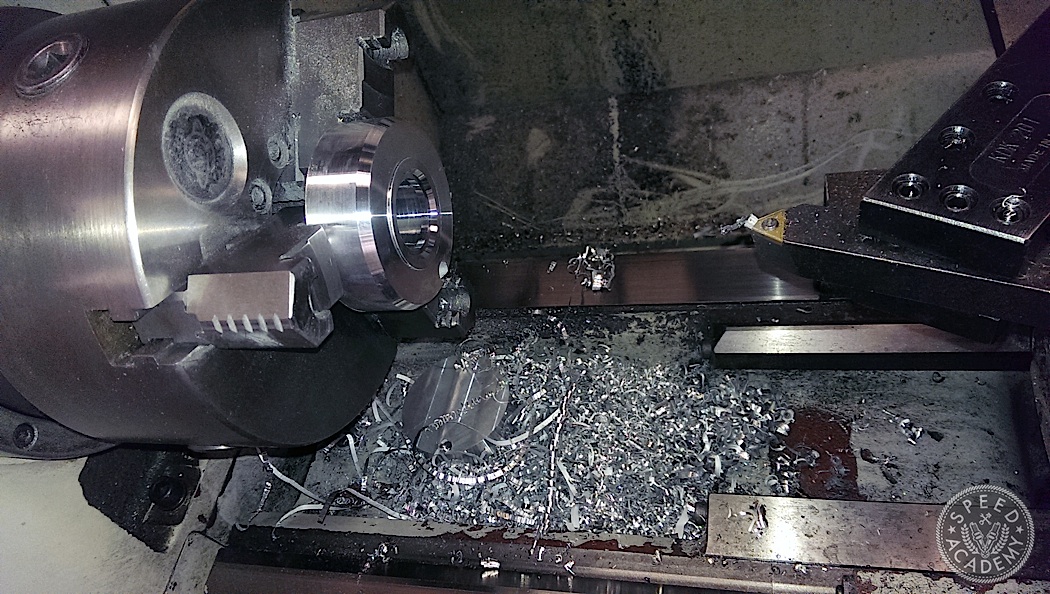 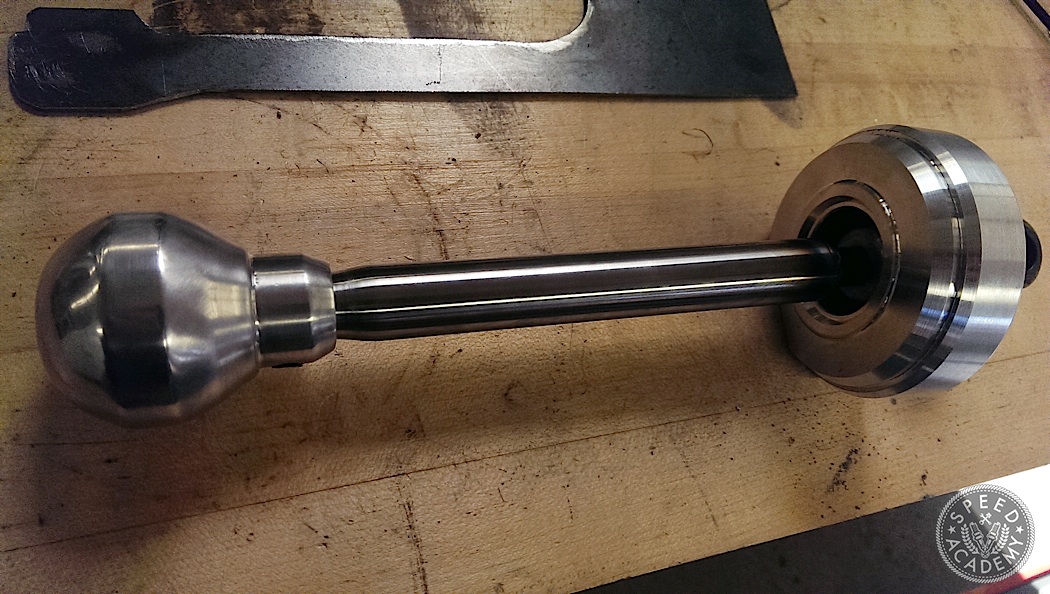 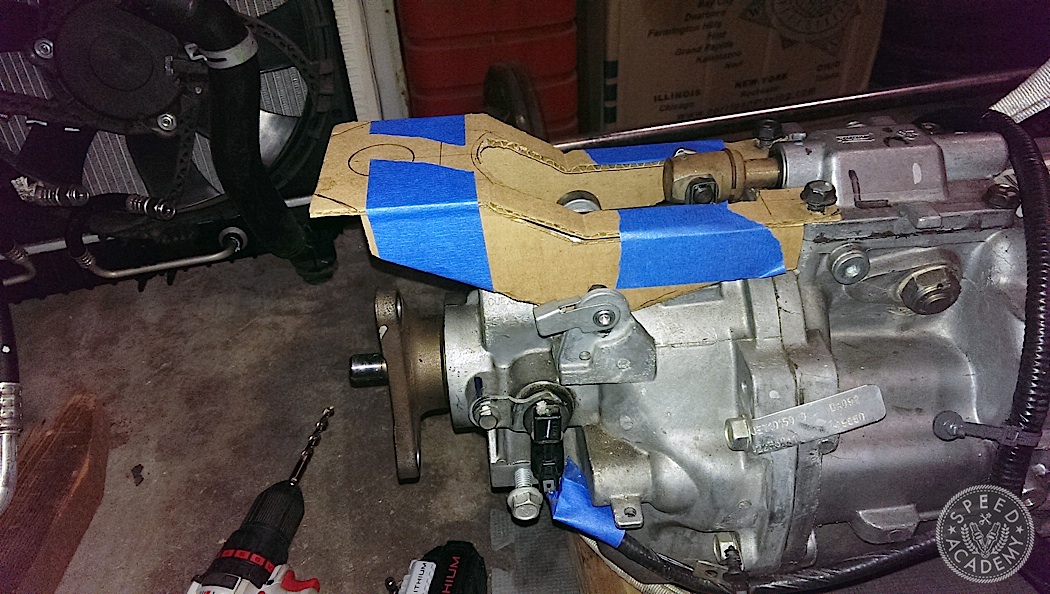 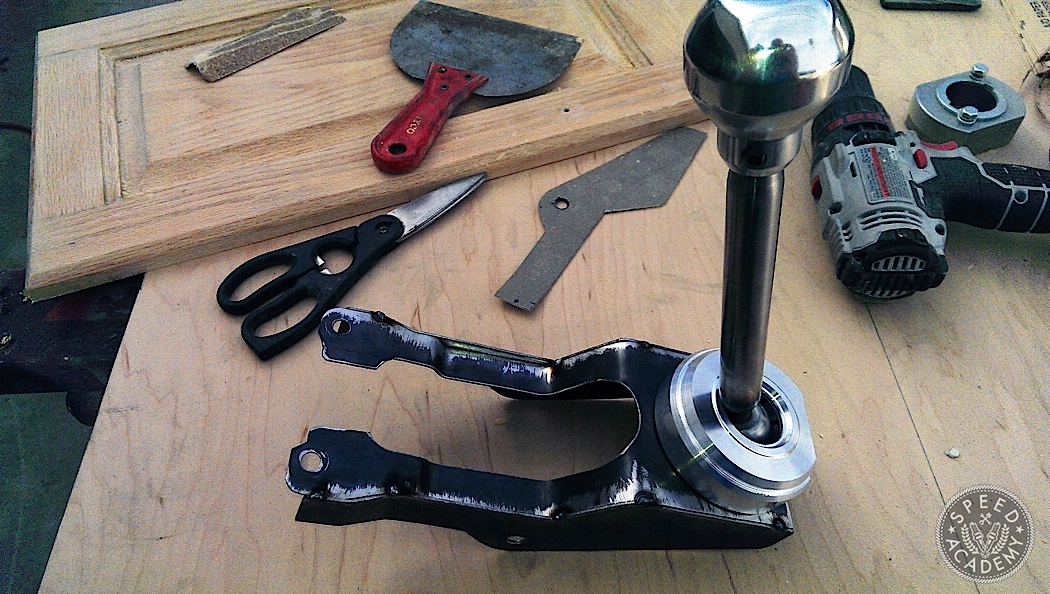 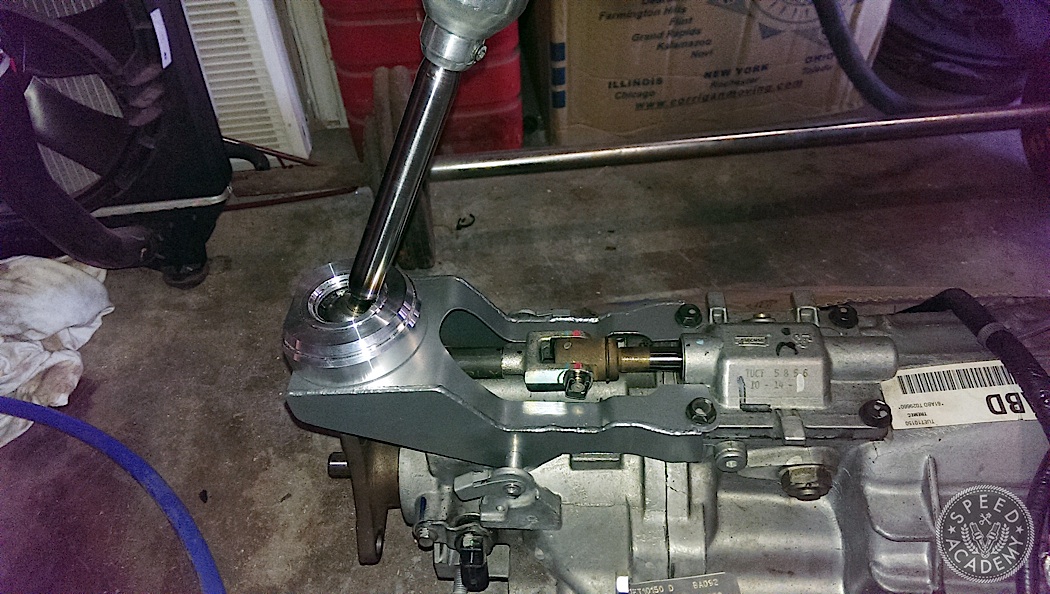 What was really putting John’s ingenuity to the test was making the switch from a T56 transmission to the stronger and quicker shifting TR6060. As John outlined, “The TR6060 is capable of handing 200-hp more than the T56, but it comes with its share of downsides. Shifter location is a biggie.  In stock form, is 3″ rearward of where I needed it to be. With shifter relocation kits being upwards of $500, I decided that I could make something myself for close to nothing. So I machined a new ball socket from aluminium and built a case to house the shifter, along with shortening the shift linkage. It ended up being in the exact location I was hoping for, but the mount also had to be modified as the location was now a bit further forward.”

Dr. Boostlove:
Or How I Learned To Stop Worrying
and Trust AEM’s Engine Management