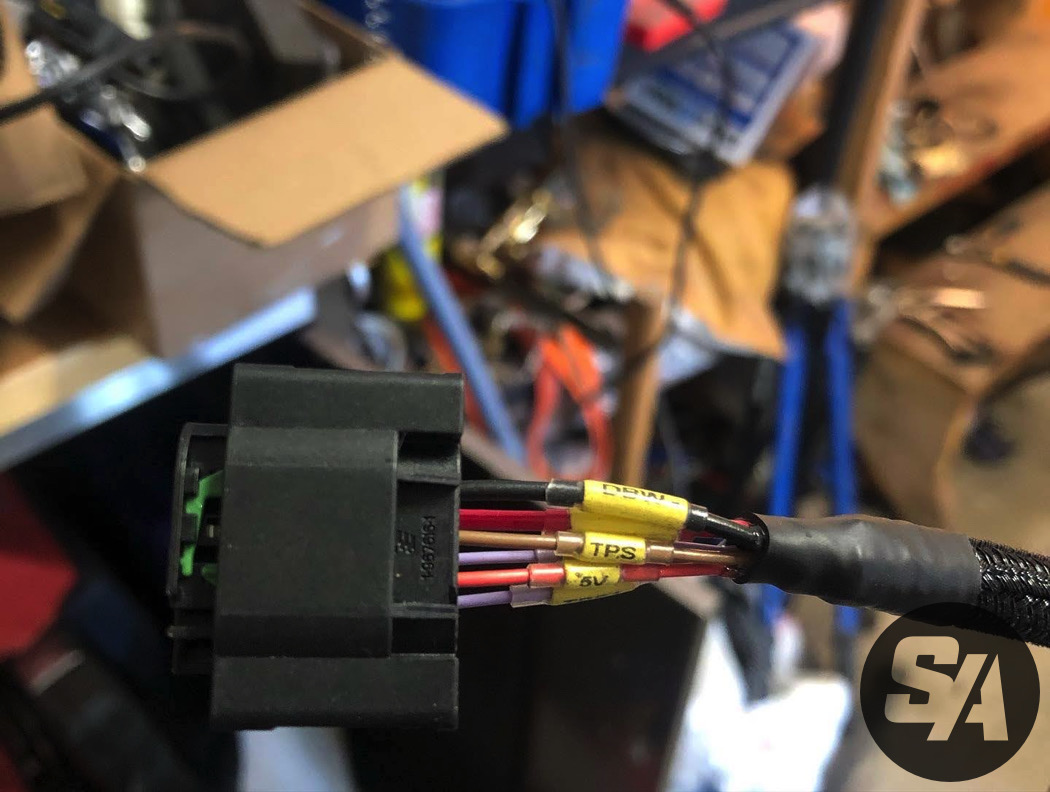 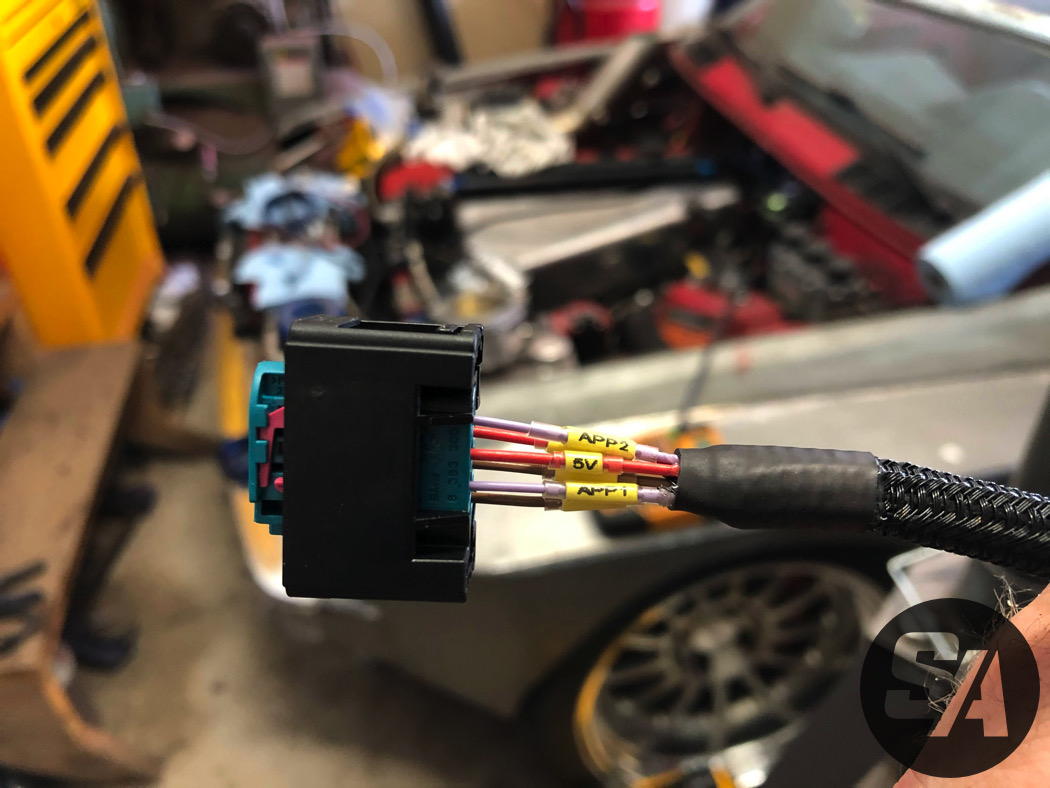 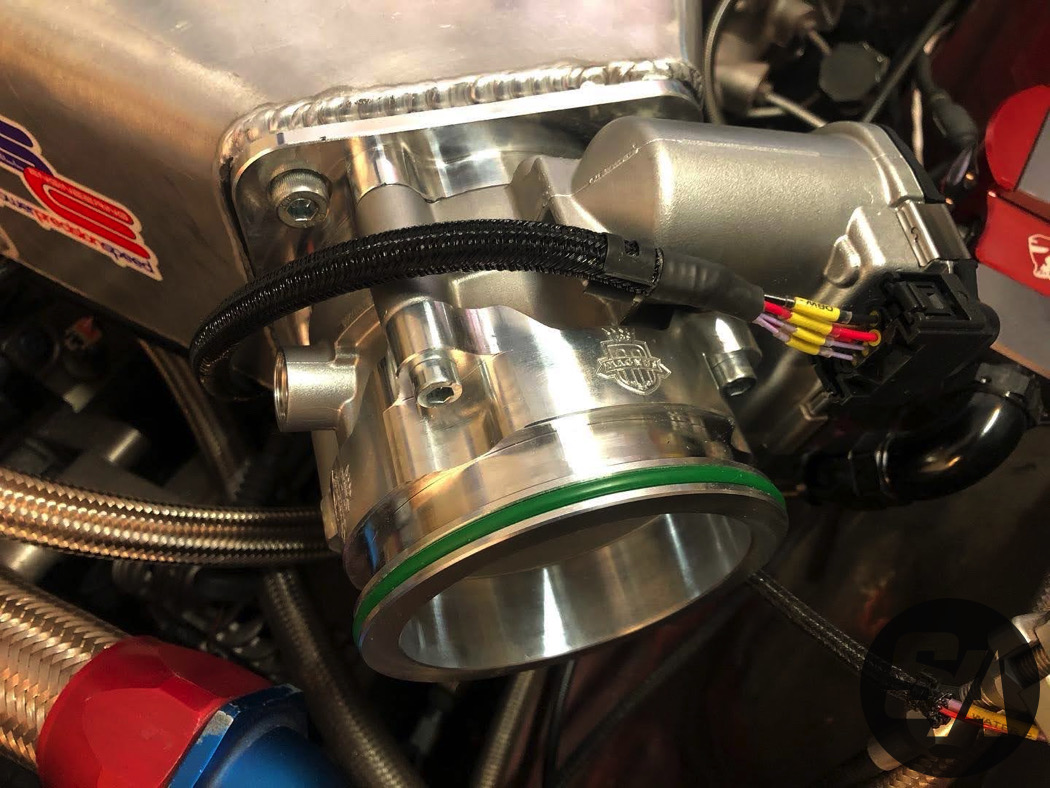 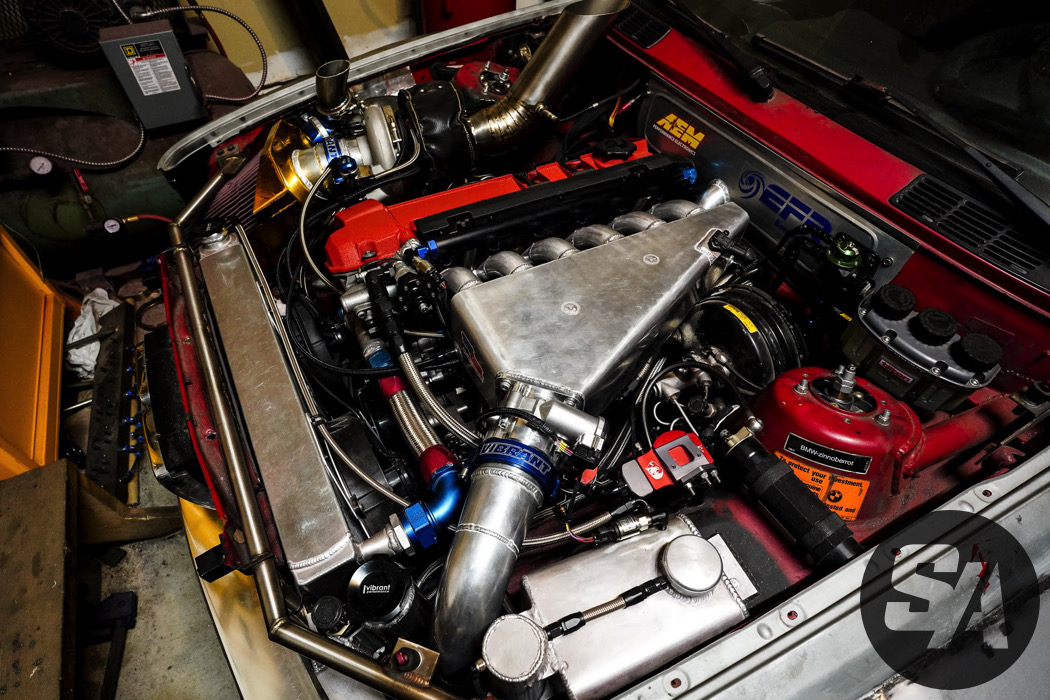 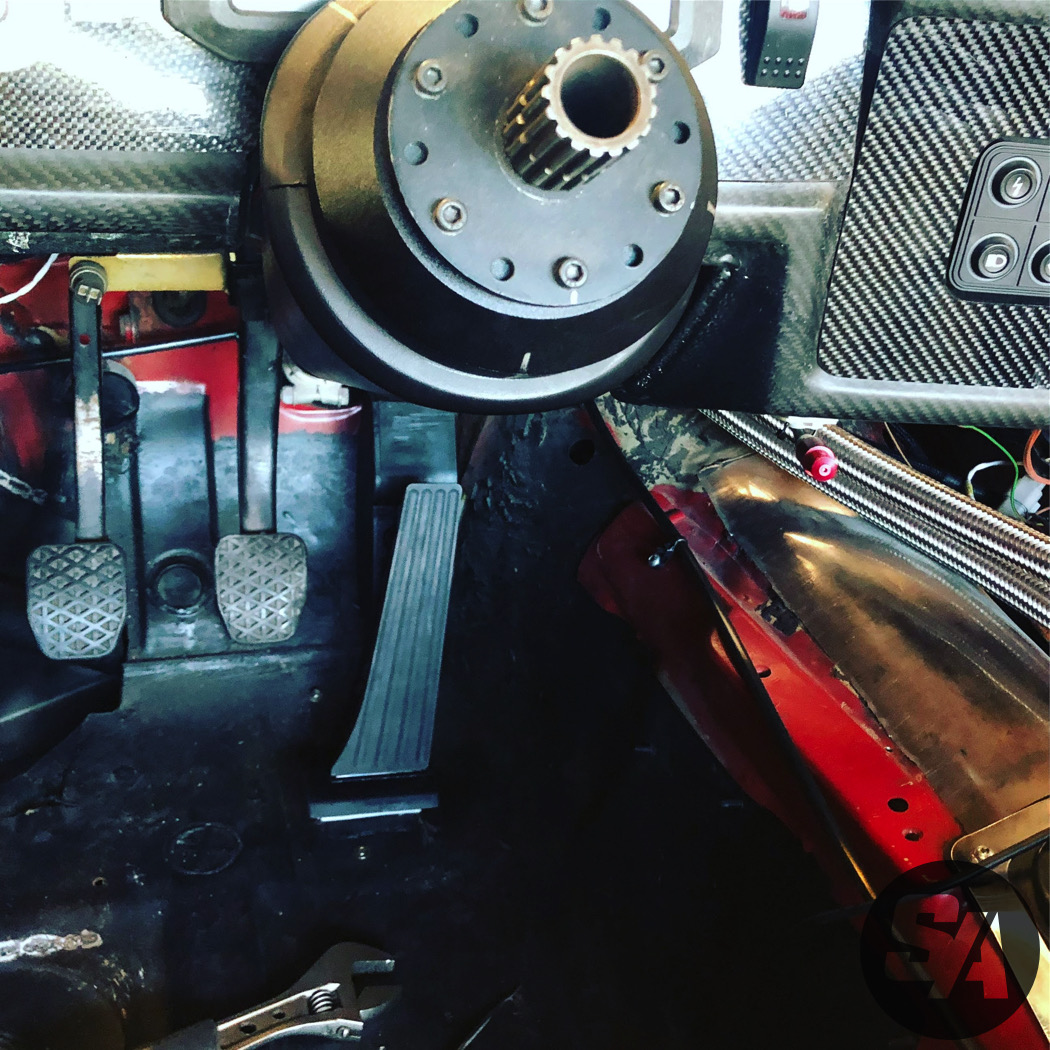 After getting a hold of the appropriate plugs and pins, the Bosch throttle body and BMW pedal were installed.

The Infinity side had some unanswered questions, though. Even though the Infinity has some of the largest available I/O of any ECU on the market, I had used up most of mine for the vast array of sensors I have on the car (shock pots, crank and coolant pressure, turbo RPM, air temp and pressure in the airbox, intercooler and intake manifold… you name it).

The Infinity is extremely flexible so some of the inputs I used for data were inputs that would normally be used for a DBW throttle. A typical DBW setup needs four position signals, two on the pedal and two for the throttle body for redundancy. When you hear about someone’s car with DBW going into limp mode, it’s usually due to one of these inputs failing, so the ECU says I have no idea what’s going on anymore.

This is where CAN bus shines. 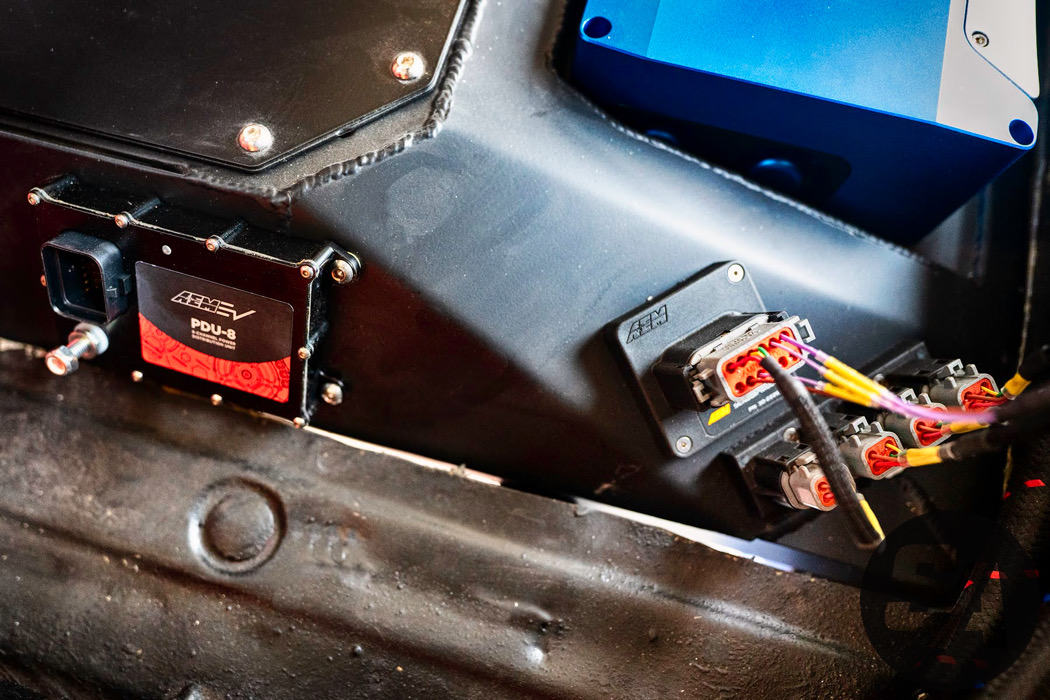 I already have a bunch of data coming through CAN bus, such as my tire temperature cameras. The data from the trunk, such as the gearbox temps and fuel levels from the fuel cell, are transmitted by the AEM 6-channel sensor module, which both simplifies the wiring with only two wires running the length of the car, and frees up inputs on the ECU. 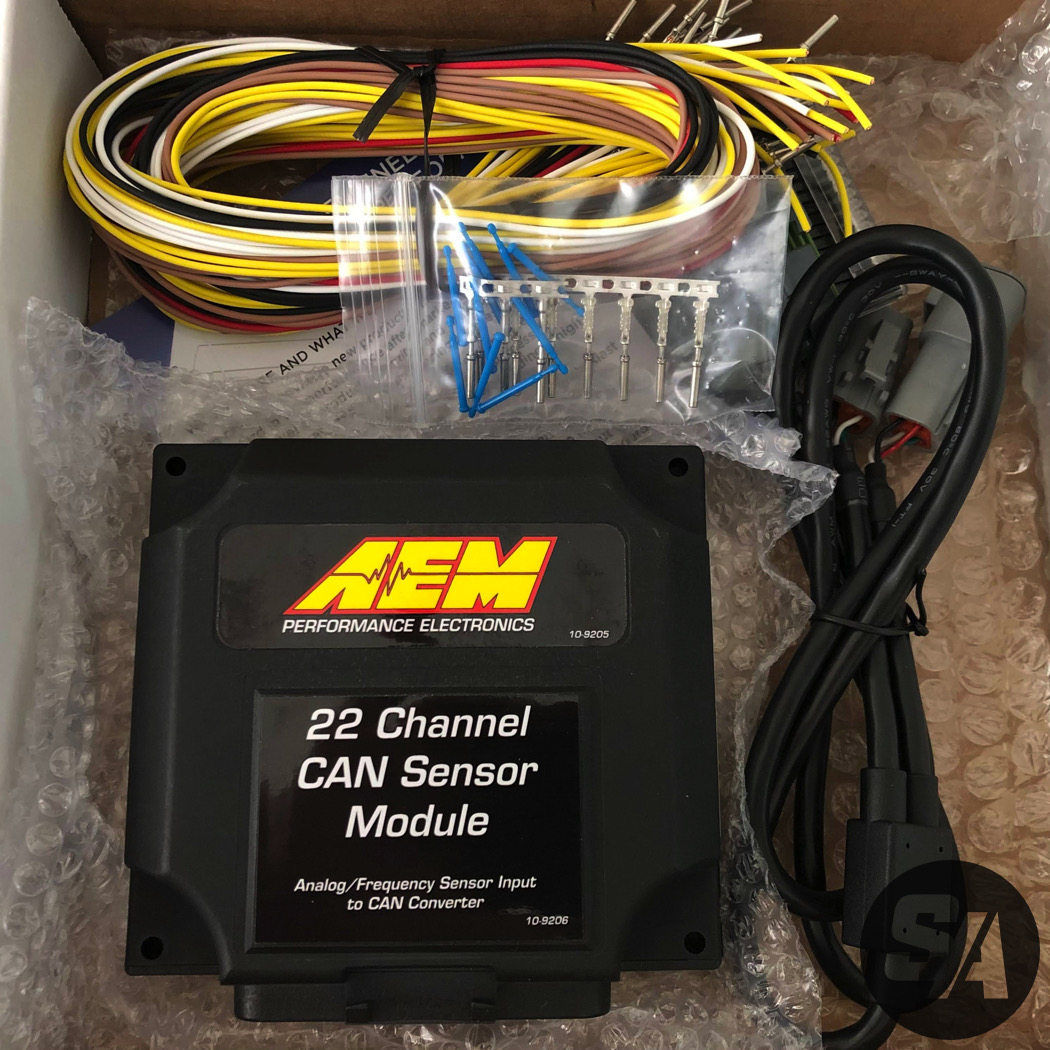 I decided to add AEM’s 22 channel sensor module and move all data off the Infinity that doesn’t need to be monitored realtime at very high resolution and that the ECU doesn’t depend on for control strategy. So signals like the steering angle, air temp and pressure signals from the intake tract that I use for monitoring turbo and intercooler performance, and turbo RPM were moved to this module. 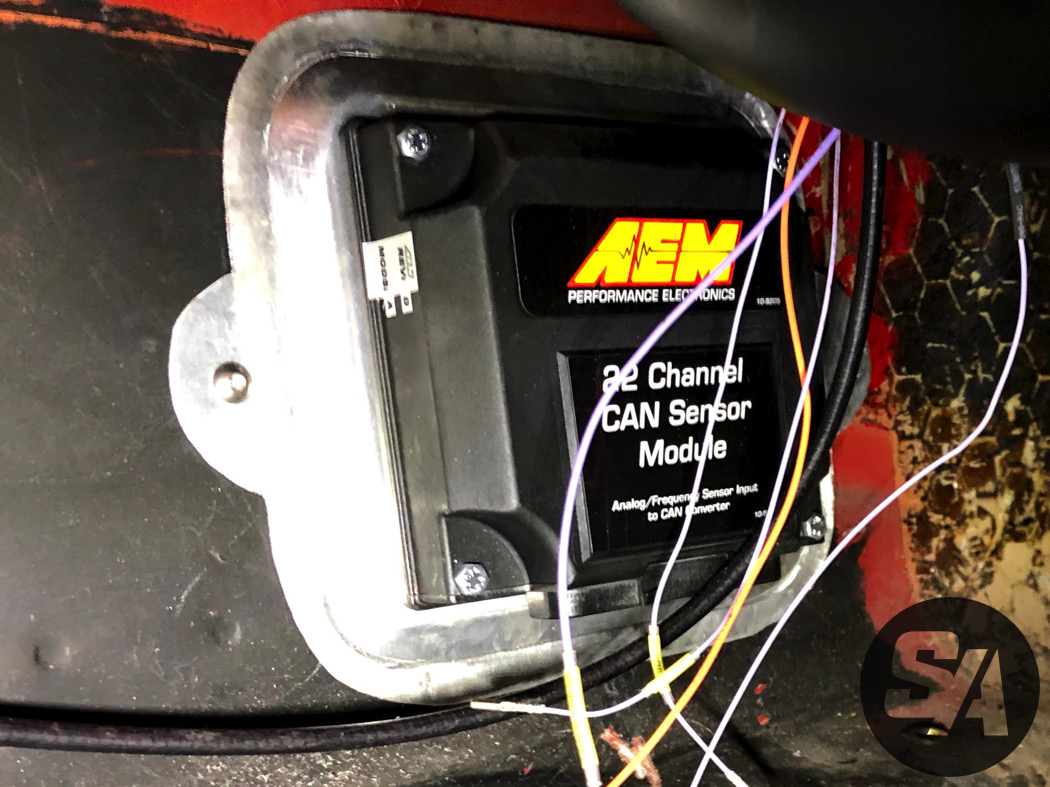 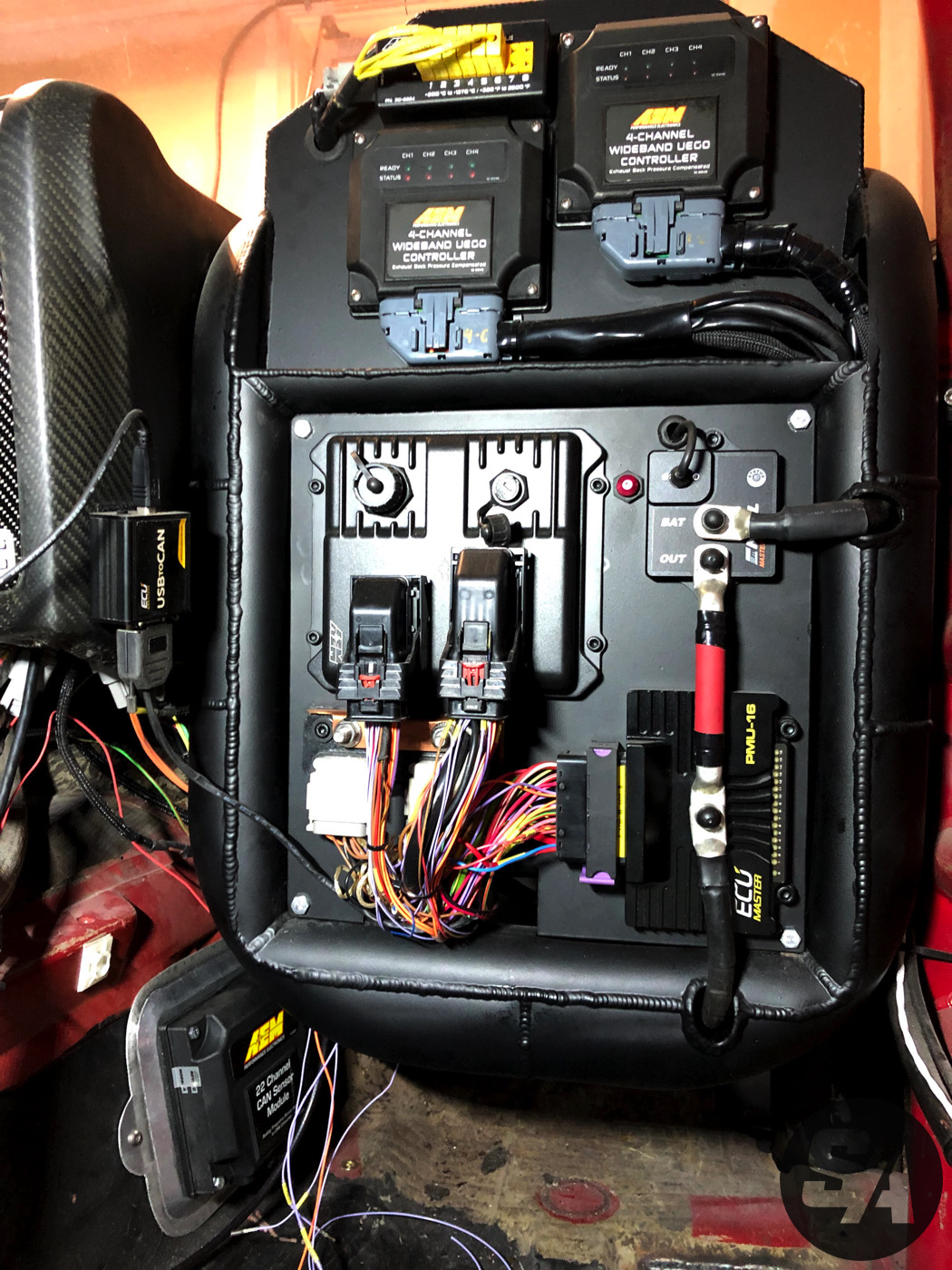 After finding a good spot for it near the brain center of the car, I moved the relevant wires over, added the DBW signals to the ECU, and hooked up the DTM connectors to the AEMnet CAN bus.

It was just a matter of configuring the logging of the new data in the CD-7 logger dash and DBW in the Infinity. I could now tune the idle control and actually specify what idle RPM the engine would hold at different coolant temperatures. 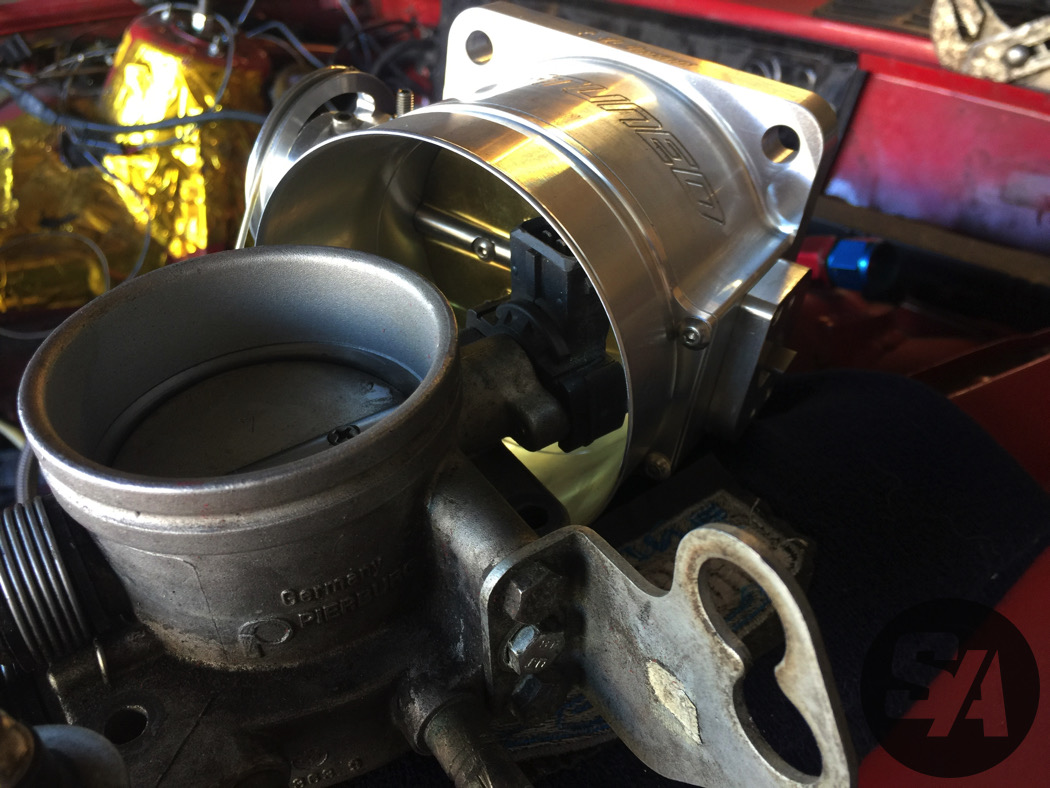 But wait, there’s more! Well, not necessarily. If you just want to have an electronic throttle vs a cable one, you’re done. But where the cable ties the pedal directly to the throttle body so they have to move together linearly, there is no such requirement with DBW.

Why would you want that? Well, look at the difference in size of the stock BMW throttle body and the 90mm K-Tuned unit – one nearly fits inside the other! Imagine when the butterfly starts opening. The 90mm will start letting in as much air early into the throttle movement as the BMW unit would when wide open. So unless you are making huge power at high boost, flowing massive amounts of air, the rest of the throttle range becomes useless. You effectively end up with a hyper-sensitive throttle pedal at normal maneuvering loads and speeds. 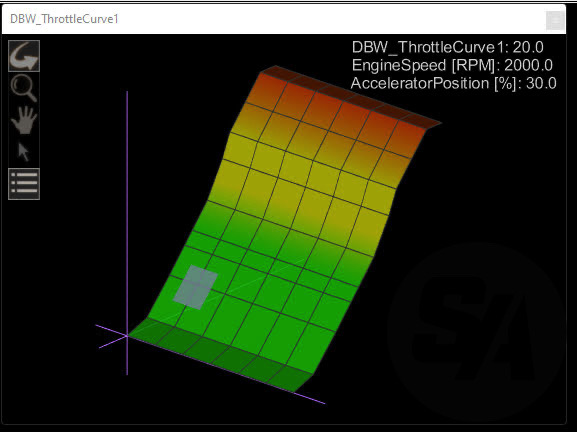 What a modern ECU like the Infinity allows you to do is change the response curve of the throttle body to the motion of the pedal. There are many possible options for the relationship, but I simply wanted to slow down the opening at low pedal positions. So as you can see in the curve, for the first 20% or so, the throttle body opens a lot slower and then it just operates linearly. This allows me to have great drivability maneuvering around the pits and paddock, and then have a responsive throttle at full boogie out on track.

The end, go away.

The NEW YORK AUTO SHOW:
From a gearhead’s perspective

If you’re looking for New York Auto Show coverage that’s chalk full of specs, pricing, and every new car released at show ,I suggest you click on over to MotorTrend or…