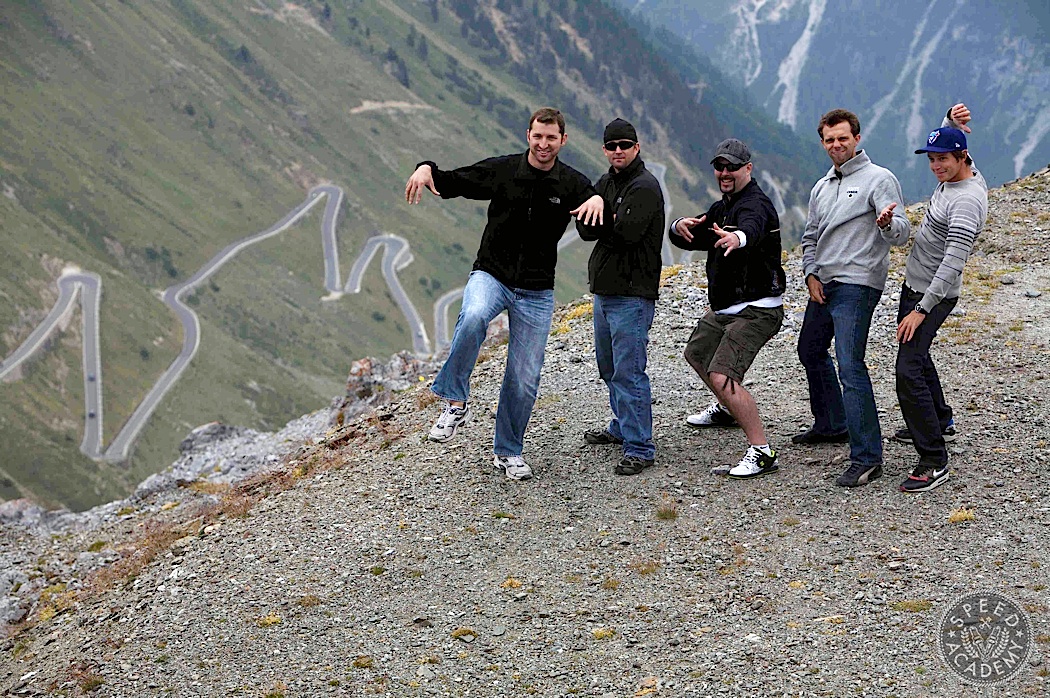 Plus a damn good opportunity for a group shot. That’s Stephen from IA Performance on the left, who was the one who put the bug in our ear about going to Germany to drive his customer Jon’s STI at the Ring. That’s Jon next to Stephen, my fat ass in the middle, followed by our buddy Mike with the itchy man-bits, and Peter doing his gay rodeo hitchhiker pose on the far right. Sharing the whole trip with this fabulous bunch of arseholes took things from awesome to ridiculously funtastic-awesome. If you’re going to make a similar journey, choose your company wisely. 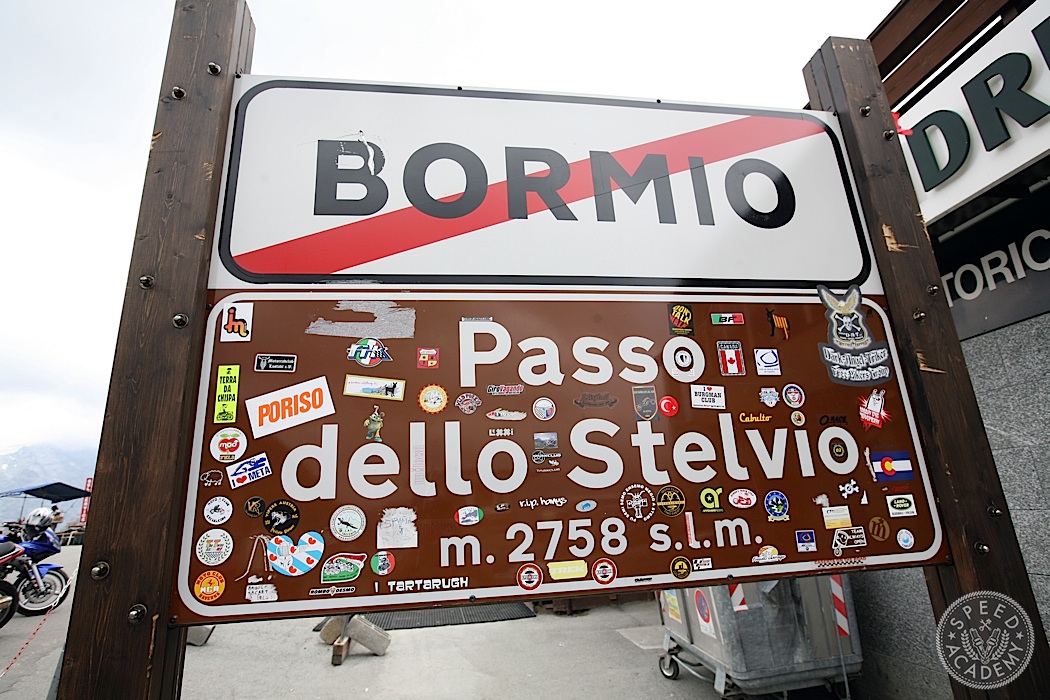 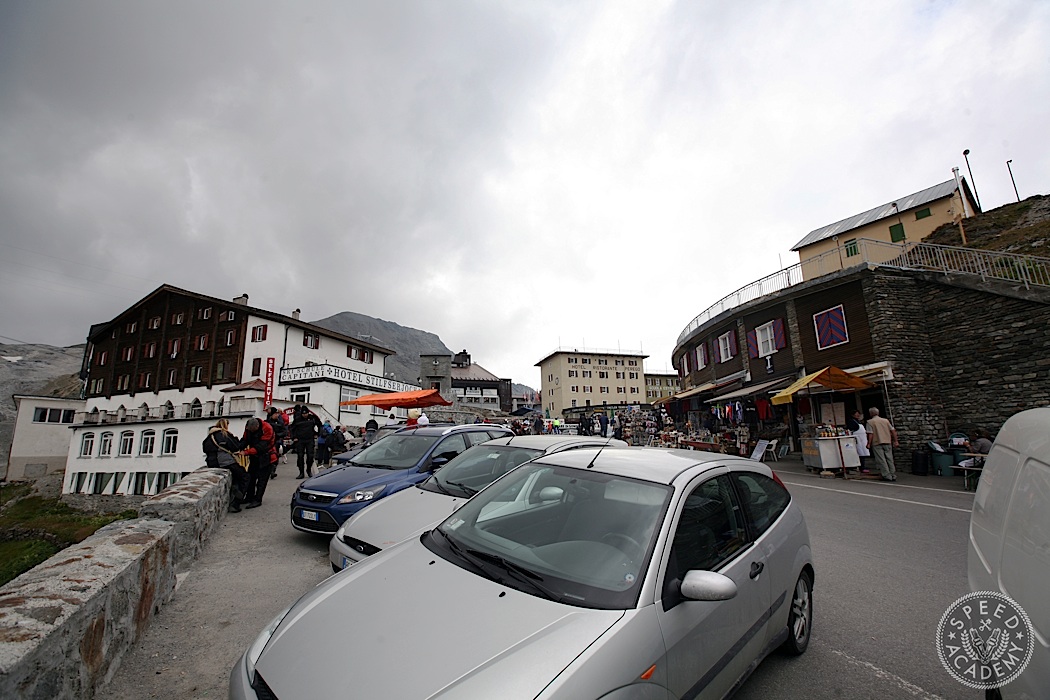 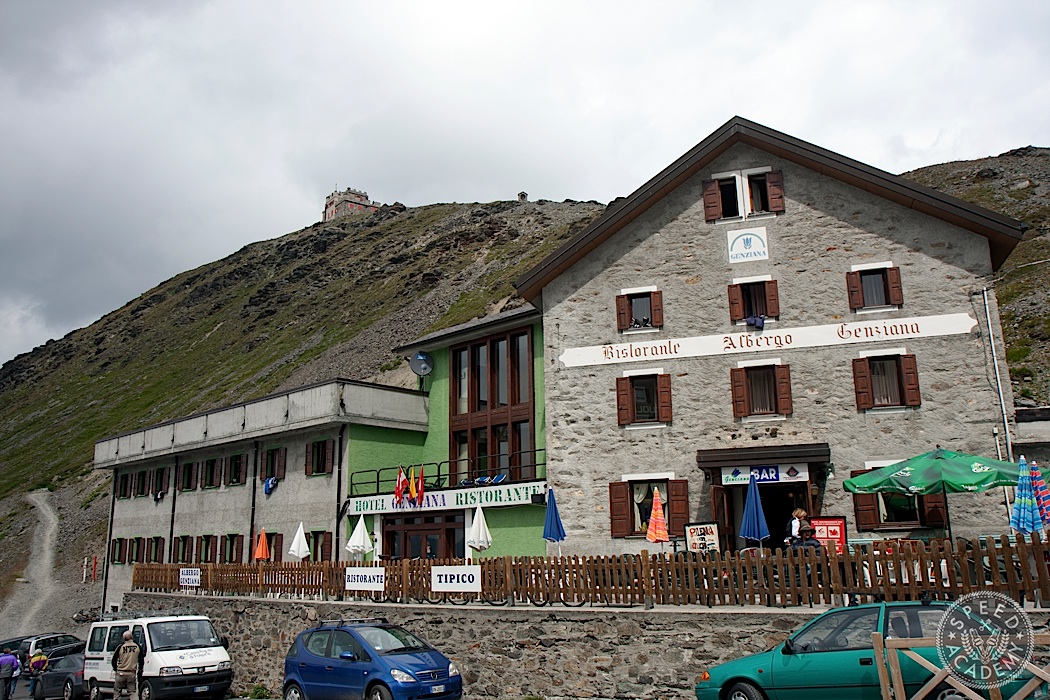 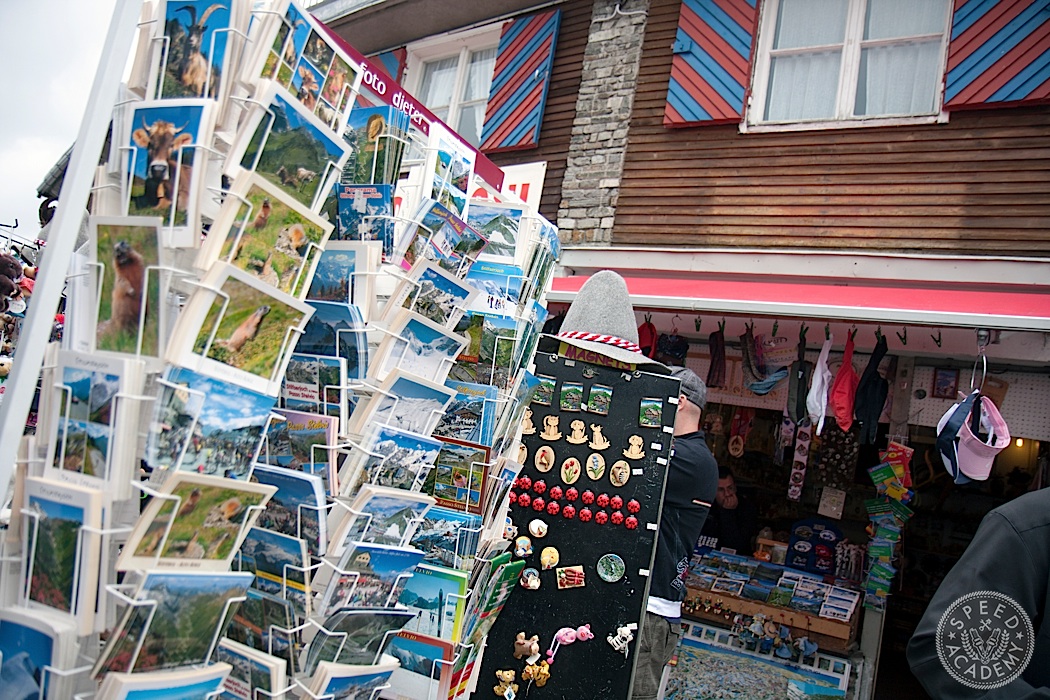 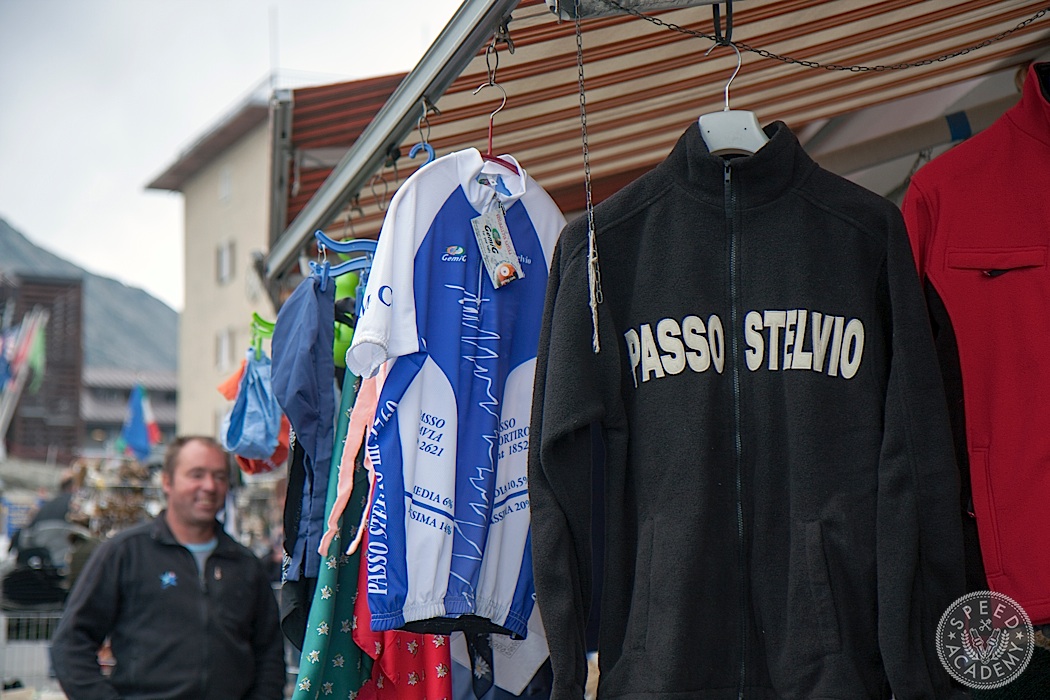 In the little village atop the Pass there’s the usual touristy stuff to be found, along with a few restaurants and hotels. 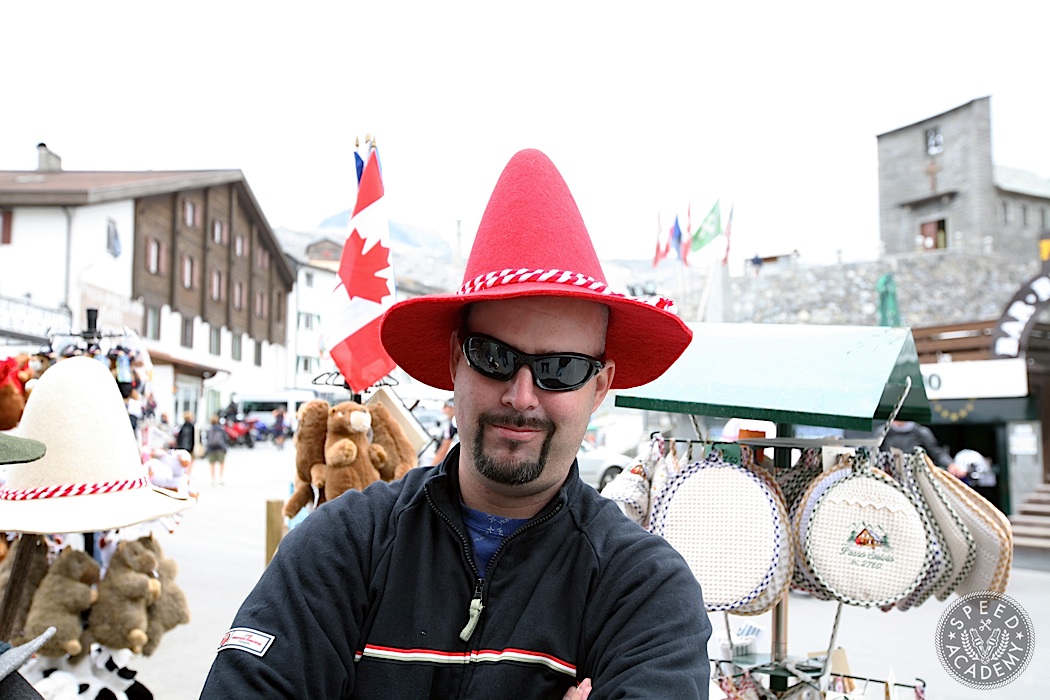 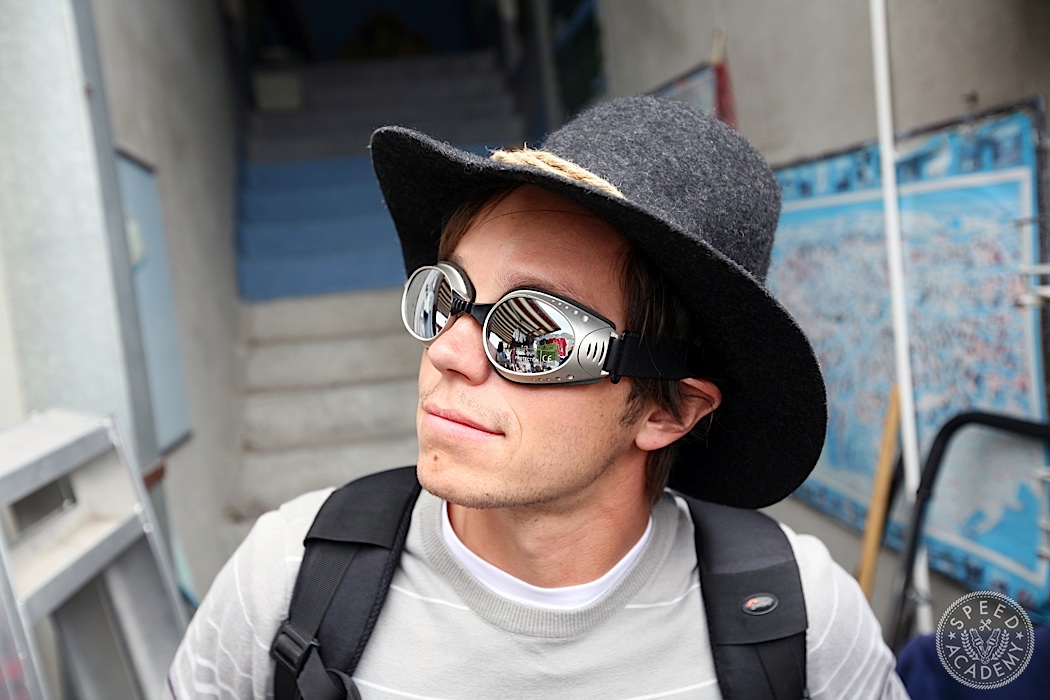 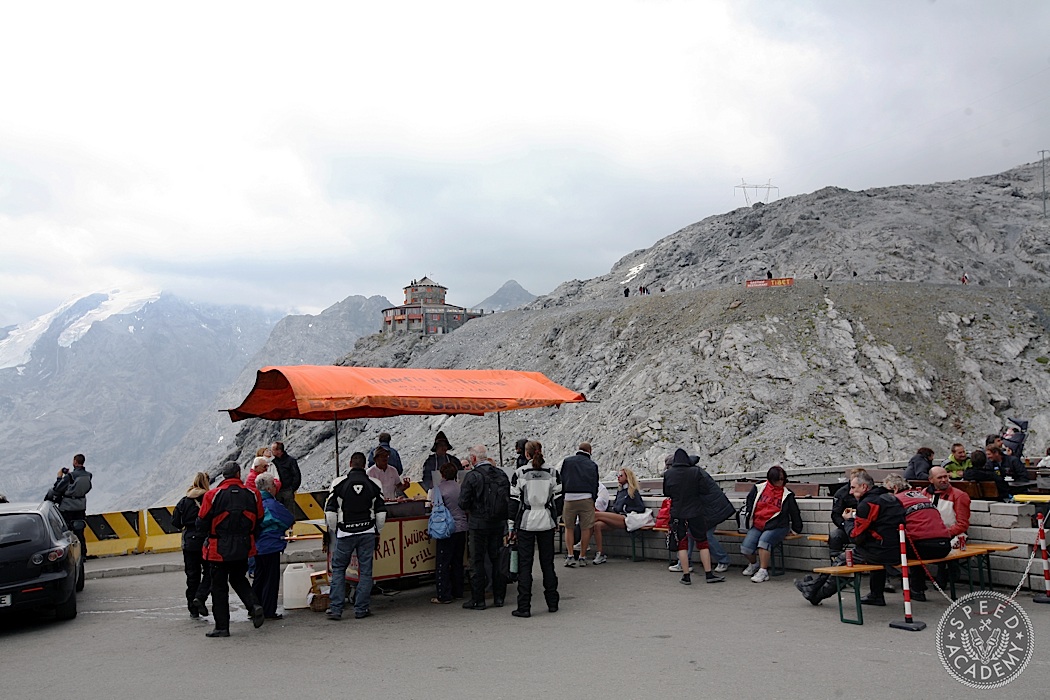 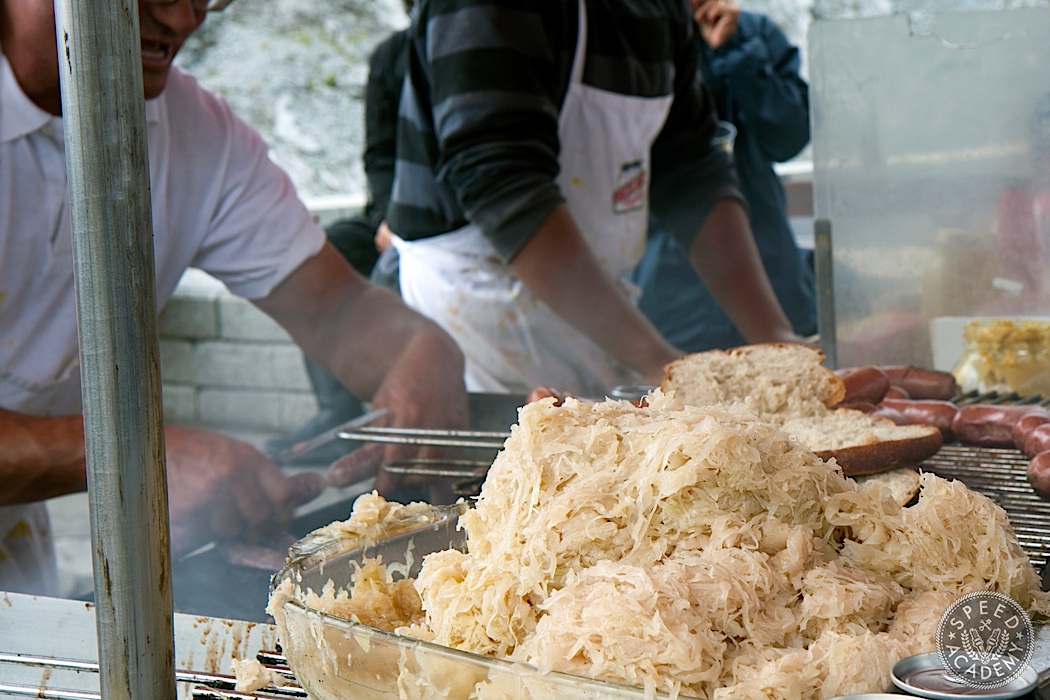 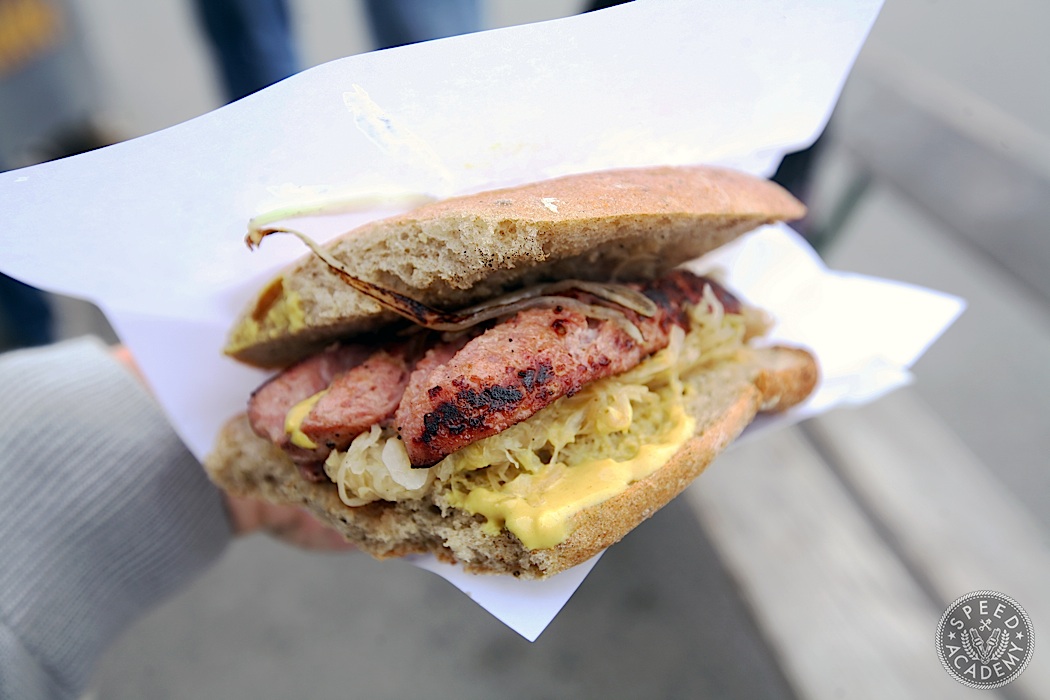 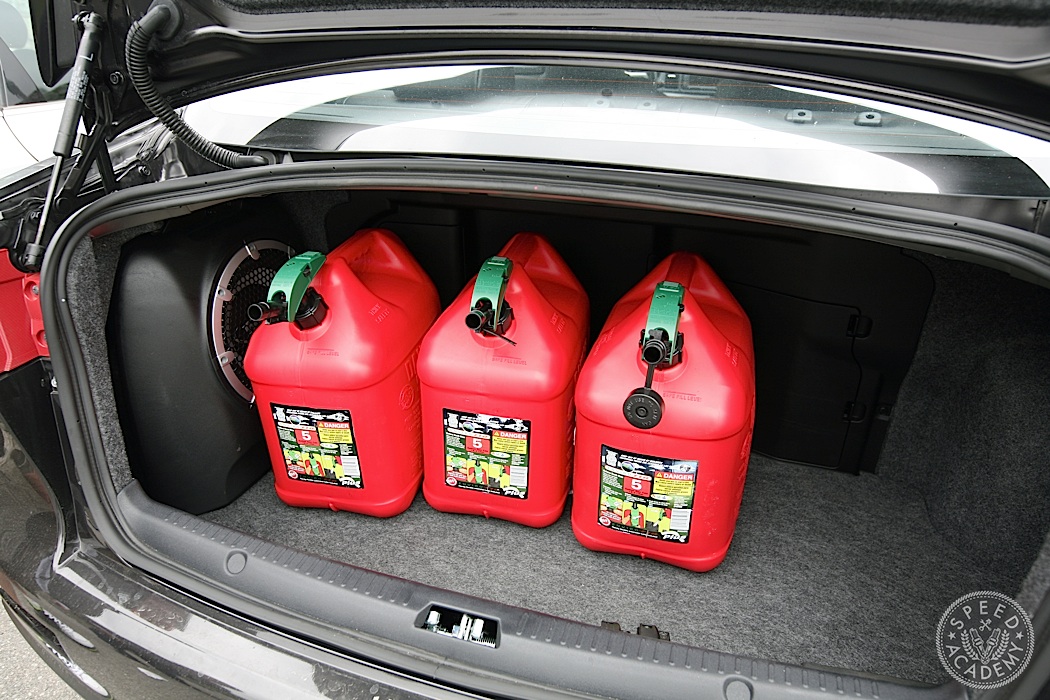 We had a bit of fun trying on the local headwear and chowing down on some brautdogs before emptying our jerry cans of premium fuel into the cars (Jon knew there was limited gas station access on this route, so we brought our own). Only fitting that the Evo hauled the fuel, since it’s such a thirsty little piggy. 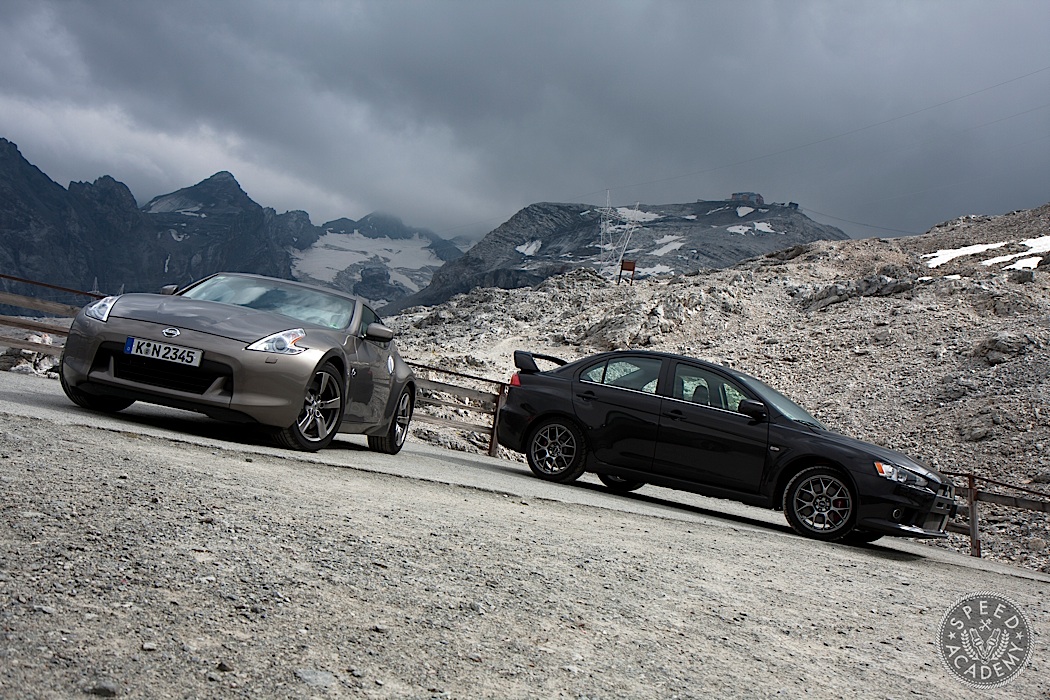 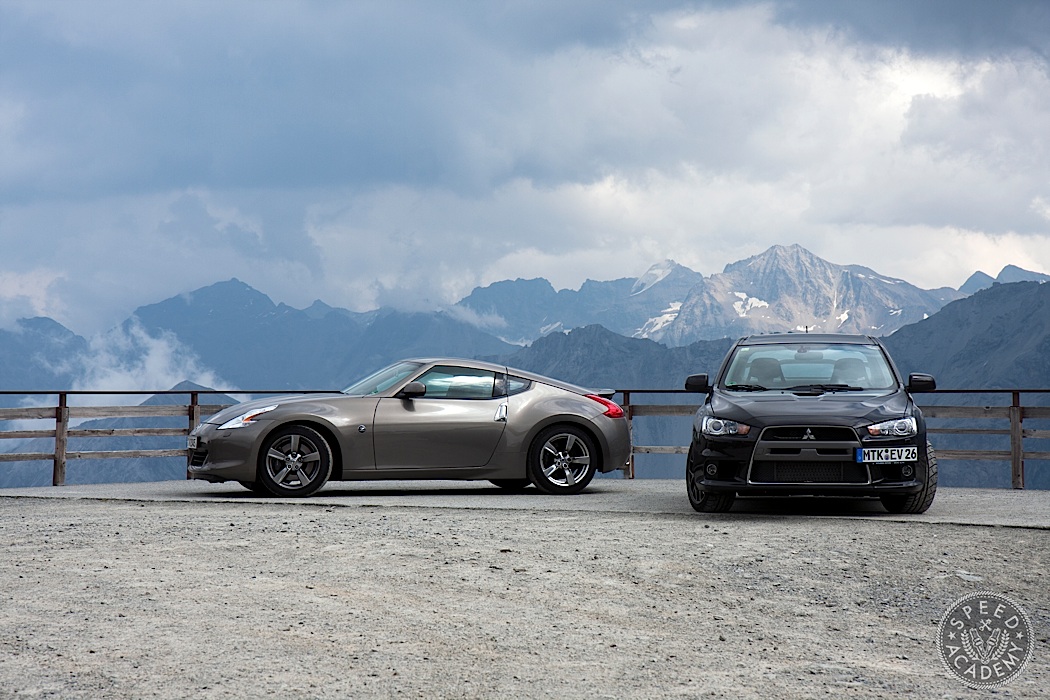 We drove to the highest point we could find in town and snapped a few glam shots before buckling up for the run back down the Pass. 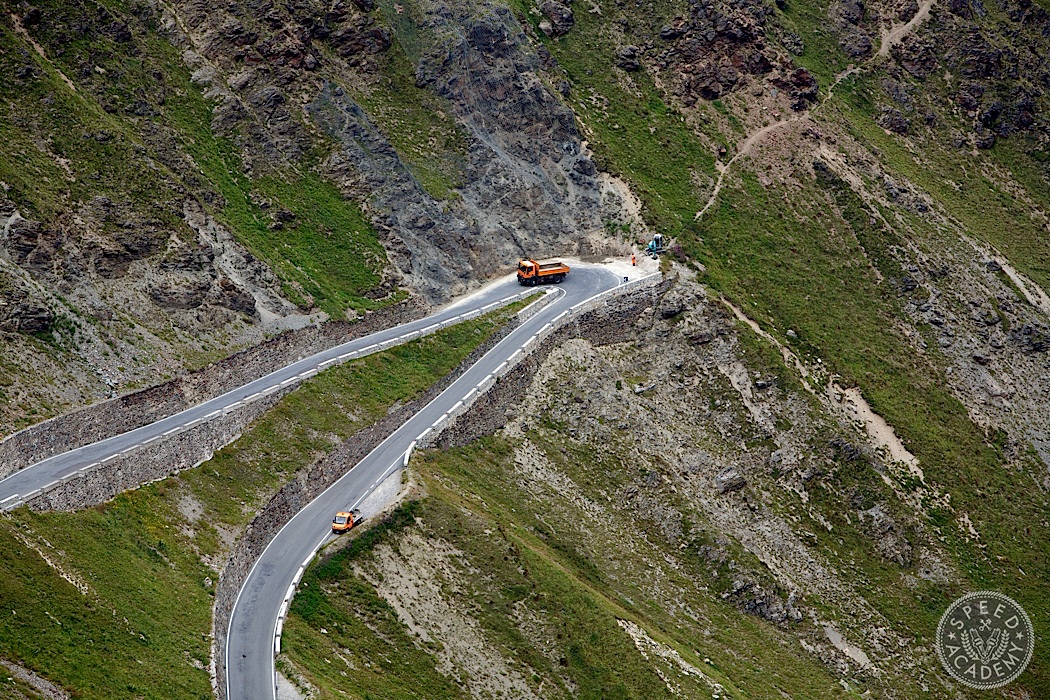 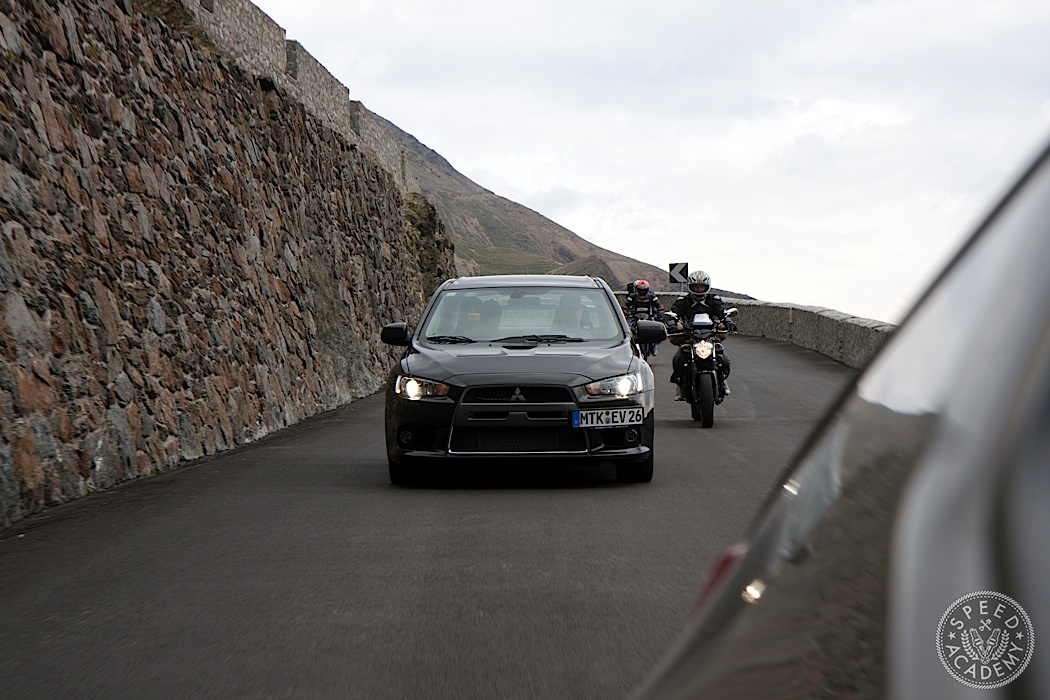 If you’ve ever done some spirited mountain driving, you’ll know how different a road can be depending on whether you’re heading uphill or down. Stelvio Pass is perhaps the most pronounced example of this, since on the way down you have a true bird’s eye view of on-coming traffic. This meant we could time our run with a break in traffic and really test the performance of both cars. Much to our surprise, we had a group of 3 motorcyclists catch us from behind, so like any group of self-respecting racers would do, we dropped the hammer and left them in the dust. 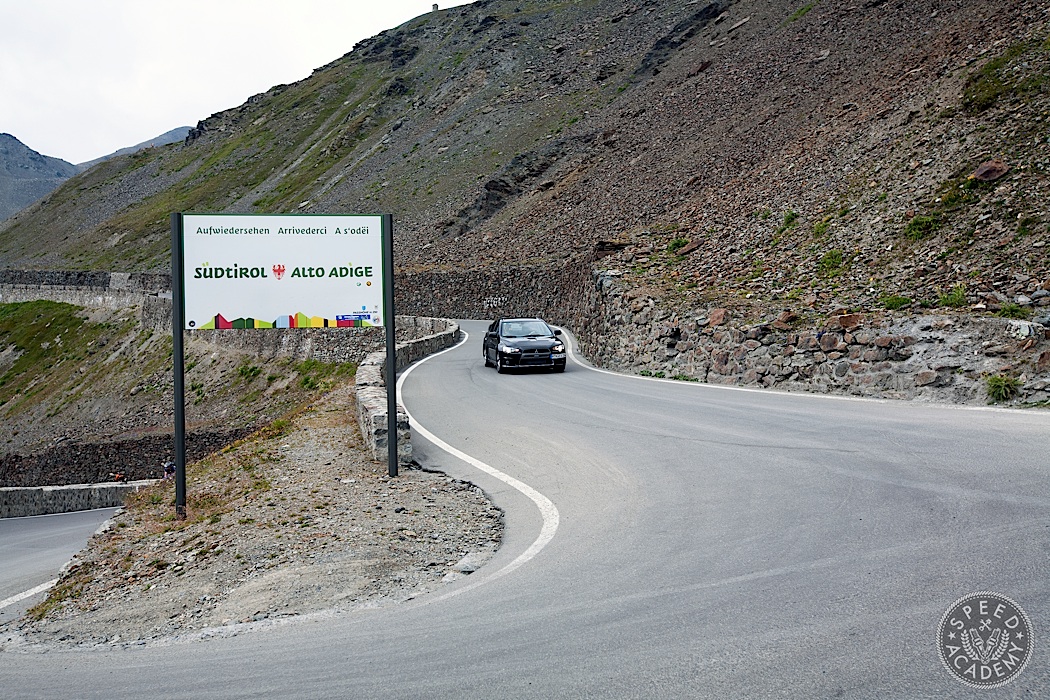 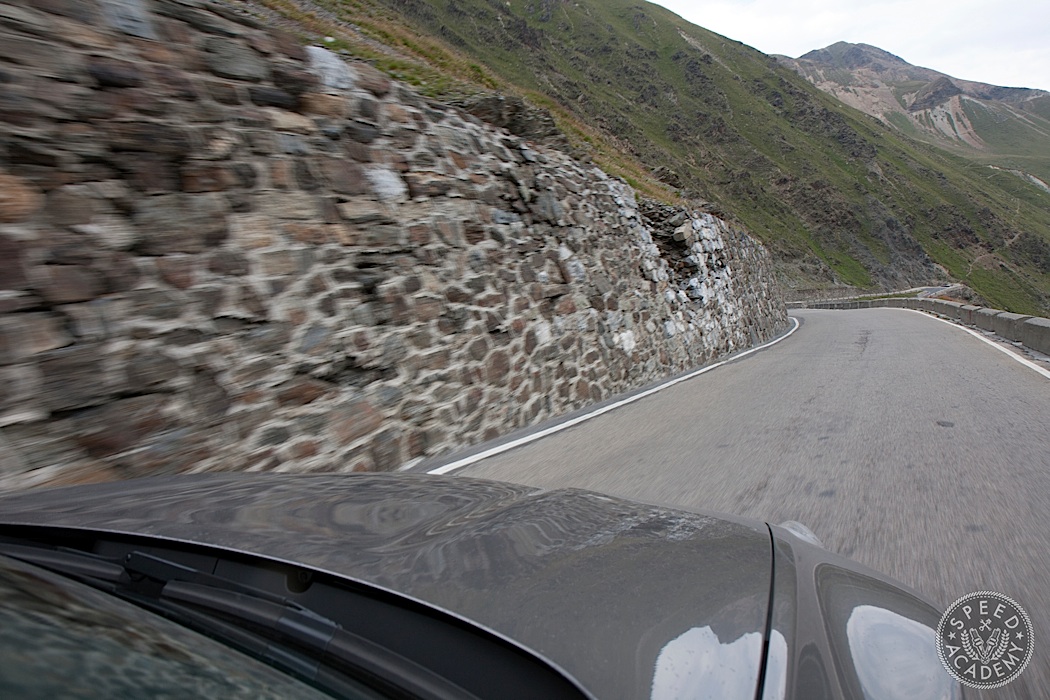 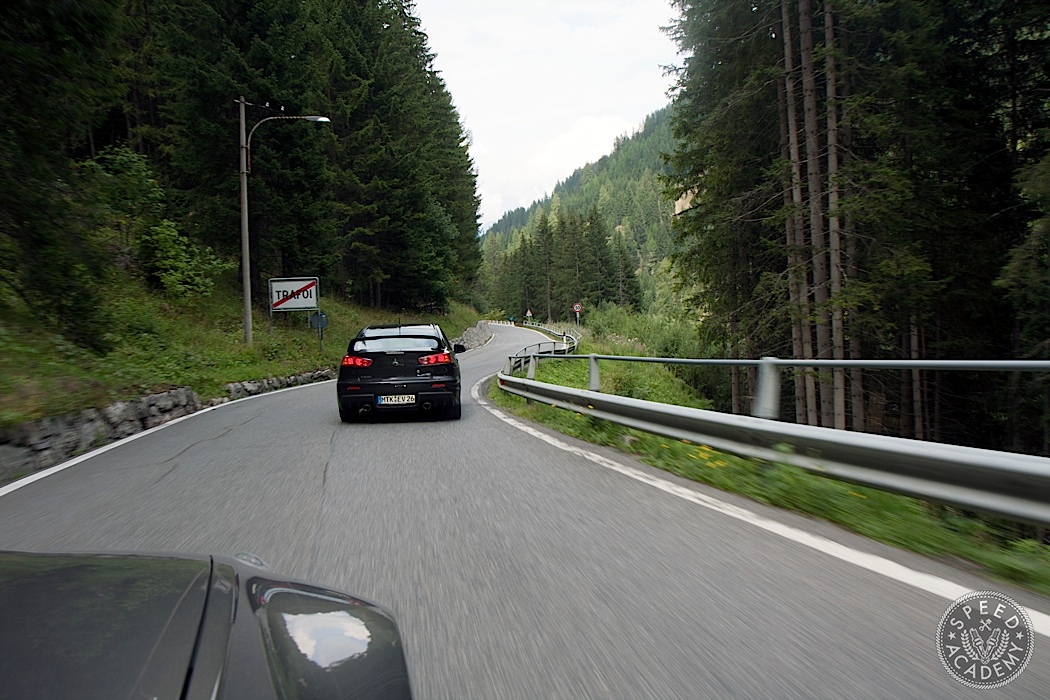 The Evo X was an absolute rocketship during the race to the bottom of the Pass, jumping out of hairpins with an AWD torque vectoring ferocity the Z just couldn’t touch. But down at the bottom in the fast sweeping sections, the Z could certainly hold its own. 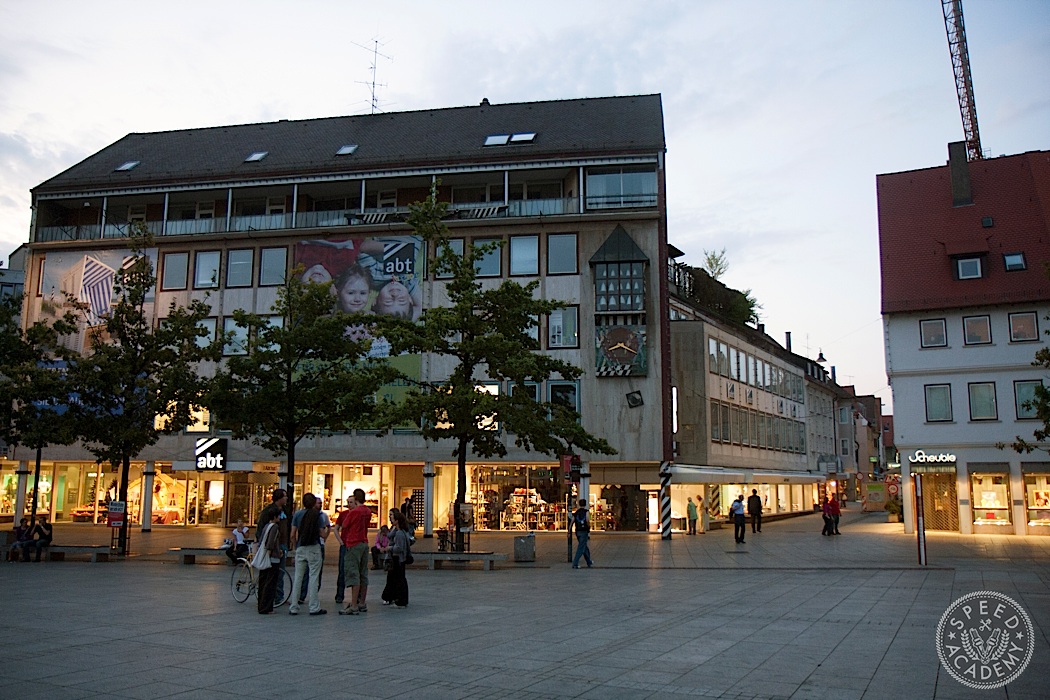 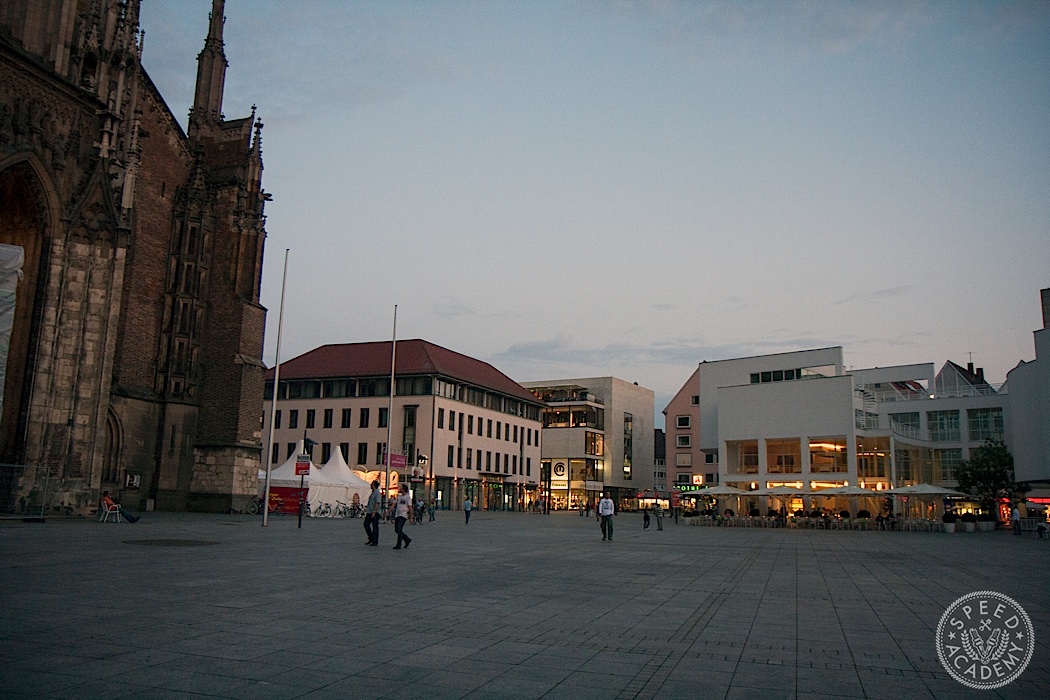 With Stelvio in our rearview mirrors, the plan was to check out the fancy new Porsche Museum, which had only just opened the year prior to this trip. This meant making a quick stop in Stuttgart on our way back up to Frankfurt. We were tired and losing sunlight fast, though, so we decided to spend the night in the charming town of Ulm, birthplace of Albert Einstein and an amazing walking experience with pedestrian-only streets through much of the town center. The main town square is particularly cool, with a towering Gothic church at its heart that even left a heathen like me in awe. 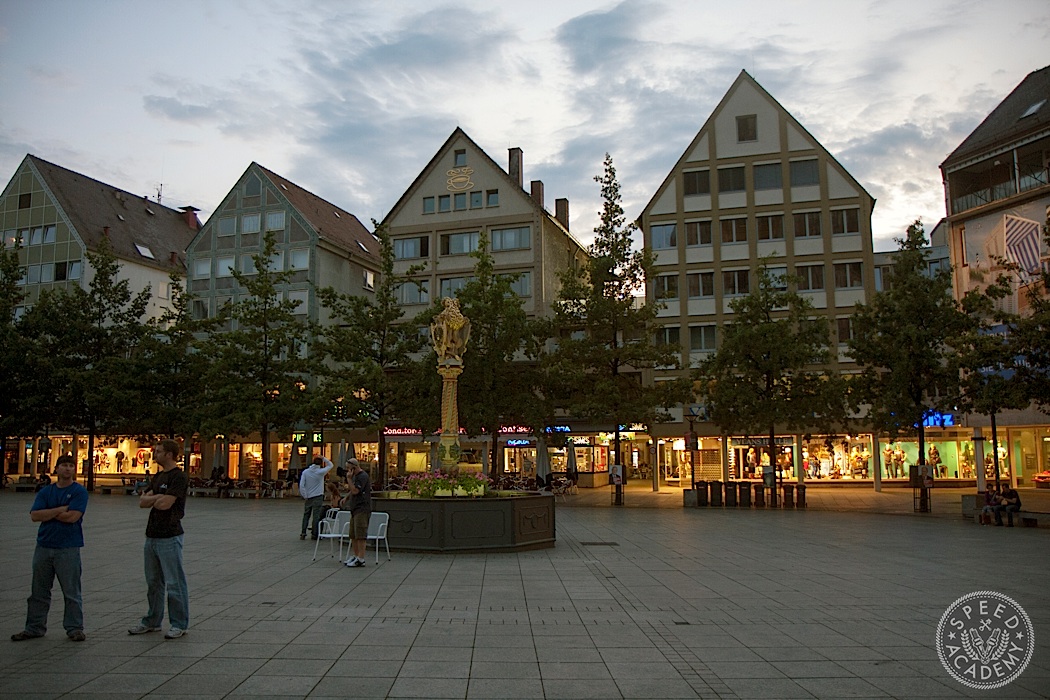 As the only married guy on the trip, that’s me on my cell phone by the white lawn chairs telling my wife what a terrible time we’re having.